Michael Ronnebeck testifies to the Senate Judiciary Committee about his nephew, Grant Ronnebeck, who was shot to death in a Mesa convenience store robbery by an immigrant here illegally. (Photo by Soyenixe Lopez) 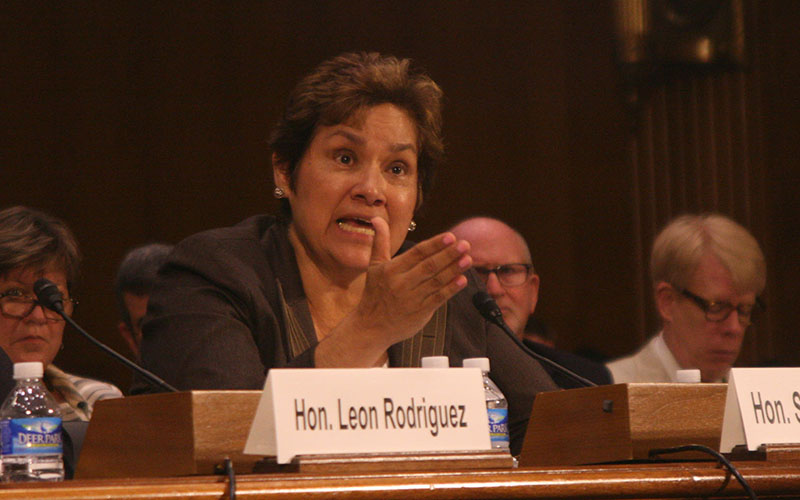 Immigration and Customs Enforcement Director Sarah Saldaña was grilled by some members of the Senate Judiciary Committee for her agencu’s handling, and release, of detained immigrants. (Photo by Soyenixe Lopez) 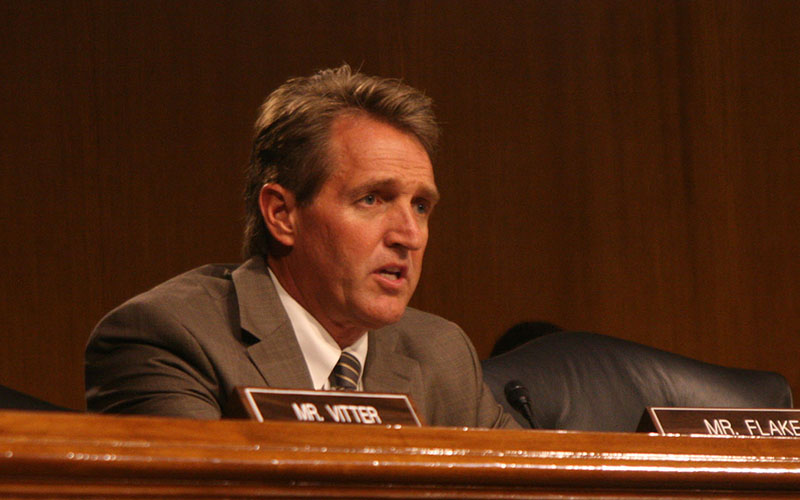 WASHINGTON – Michael Ronnebeck was back in Washington on Tuesday, urging lawmakers to crack down on repeat offenders in the immigrant population in order to prevent another killing like that of his nephew.

Grant Ronnebeck was shot to death in a Mesa convenience store robbery in January. The man accused in the crime was in the country illegally, and had been arrested on other crimes and released before shooting Ronnebeck over a pack of cigarettes.

“It is my family’s greatest desire that Grant Ronnebeck’s legacy will be more than a fading obituary, a cemetery plot or a fond memory,” Ronnebeck testified. “We want Grant’s death to be a force for change and reform in the immigration policies of this great nation.”

His remarks came during a Senate Judiciary Committee hearing on the Obama administration’s “Misdirected Immigration Enforcement Policies,” which featured a parade of witnesses like Ronnebeck who had been victimized by criminal immigrants.

The title set the tone for the hearing, with lawmakers demanding that Immigration and Customs Enforcement Director Sarah Saldana pinpoint what actions her agency has taken to address concerns about the release of illegal immigrants.

“Our objective with PEP is to implement a new interior enforcement approach in a way that supports community policing by focusing on convicted criminals … and working with state and local law enforcement to take custody of dangerous individuals,” Saldana said.

Saldana said ICE has “compatibility issues” with the many state and local police agencies it must work with, but that the agency is working to have a better system in place by the end of the year.

That did little to comfort critics on the committee, who said the program just isn’t working, pointing to numerous cases in the past few years like Ronnebeck’s and the other witnesses. They charged that criminals who are in the country illegally are being released too often.

While Democrats on the committee agreed that illegal immigrants who are convicted must be held accountable for their crimes, they warned that “we must not blame a whole community for the reprehensible actions of a few.”

“Claims that the federal government is not enforcing immigration laws are incorrect,” said Sen. Patrick Leahy, D-Vermont, and the ranking member on the committtee. “In fact, the Obama administration has committed unprecedented resources to enforcement efforts at the border.”

Witnesses spoke of the importance of creating trust among immigrant communities for crime victims, regardless of their legal status. Otherwise, those victims may be too scared to report a crime in fear of being found out by police and deported.

Montgomery County, Maryland, Police Chief Thomas Manger said that trust is a shared responsibility. Local agencies with limited resources cannot be expected to expand their role in immigration enforcement, which is a federal responsibility, but they are willing to do their part, he said.

Flake said Tuesday that the fact that some of these illegal alien criminals are being allowed back in the country after being deported several times is concerning to Arizonans.

“We want to make sure that the programs that we have, that are actually working, continue and are being fully implemented,” Flake said.

Flake’s comments came the same day that he co-sponsored a bill with Sen. David Vitter, R-Louisiana, to withhold federal funds from “sanctuary cities” that do not comply with the Homeland Security Department. The Stop Sanctuary Cities Act would reallocate any withheld funds to regions of a state that do comply with federal immigration law.

“Sanctuary cities are not simply interfering with federal immigration law, they are breaking it without consequence while risking public safety,” Flake said in a statement announcing the bill.

Ronnebeck, who was in Washington in February to testify to a House committee, said after his testimony Tuesday that he sometimes feels “anger and frustration” that these issues continue to be talked about without no action taking place yet.

“I know that the discussion has gotten louder since Grant’s death in January,” Ronnebeck said. “I hope that there’s some resolve quickly before more American lives are lost.”

It is my family’s greatest desire that Grant Ronnebeck’s legacy will be more than a fading obituary, a cemetery plot or a fond memory,