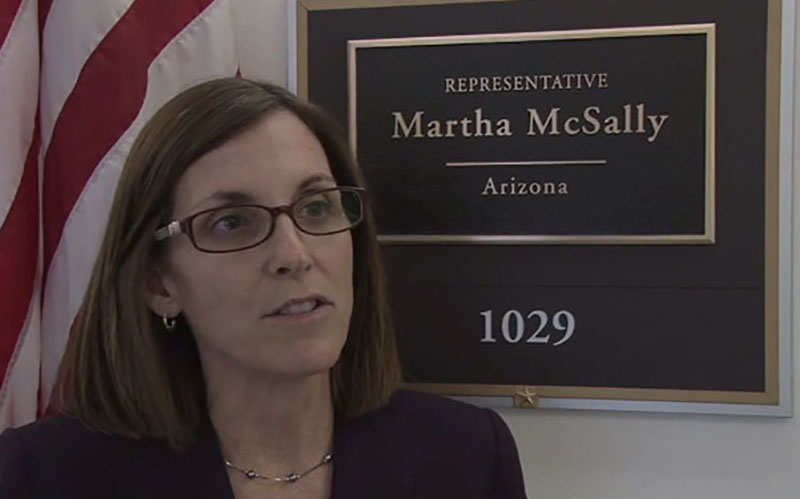 Rep. Martha McSallly, R-Tucson, outside her Capitol Hill office. The freshman lawmaker was elected by a razor-thin margin in 2014, which experts say explains her heavy fundraising in this election cycle. (Photo by Sierra Oshrin)

WASHINGTON – Arizona Rep. Martha McSally, R-Tucson, has raised more campaign funds this year than all but three senior members of the House, according to a watchdog group’s analysis of the latest campaign finance reports.

Second-quarter reports filed with the Federal Election Commission this month showed that McSally had raised almost $1.7 million by June 30 and had $1.4 million in cash on hand at that time.

The only members with more in their individual accounts after the first half of the year were House Speaker John Boehner, House Majority Leader Kevin McCarthy, R-California, and Rep. Paul Ryan, R-Wisconsin, the GOP’s 2012 vice presidential nominee, according to an analysis by the Center for Responsive Politics.

Campaign finance reports for members of the Arizona delegation in the House as of June 30, according to the most recent Federal Election Commission reports.

Among members of the Arizona delegation, only Rep. Kyrsten Sinema came close to McSally, raising $978,632 in the first half of the year with $968,776 in the bank as of June 30, according to her FEC report. Sinema, like McSally, is in what could be a contested district for re-election.

And state Democrats this week promised a race against McSally, despite her early fundraising lead.

“Last few months she’s been the darling of the Republican party and so they’ve been jumping on board to give her some strength for next year … trying to help her out on in her first re-election next year, which is going to be very competitive,” said Barbara Lubin, communications director for the Arizona Democratic Party.

Lubin said Democrats considering a run will “have their work cut out for them” but that it is still a very competitive race.

One Democrat who has already announced, Arizona Rep. Victoria Steele, said she’s not worried about McSally’s campaign funds but is focused on her own fundraising, which has just begun but “is going very well, actually.”

“I’ve come from behind many times and always succeeded,” said Steele, of Tucson, adding that she would not focus on the “mountain ahead of me” but on “climbing the mountain with as much support as I can get.”

Political experts said they were not surprised that McSally, who raised more than $600,000 in the first quarter of the year, continued on her torrid fundraising pace in the second quarter.

They said the freshman congresswoman, who raised close to $4.9 million to win a razor-thin victory over incumbent Democratic Rep. Ron Barber in 2014, continues raising money to ensure that she keeps the seat when she is up for re-election next year.

“After the squeaker of the race she won last time, she got right to work fundraising so she would have an easier time in 2016,” said Viveca Novak, a spokeswoman for the Center for Responsive Politics. “She’s clearly in a much more comfortable position this time around.”

McSally’s comparatively large fundraising haul has been helped by large political action committees and wealthy individuals who “have been giving lots of money to her. The Republicans are probably trying to put her in a good place to win next year,” Novak said.

Other experts said that McSally has been helped by Citizens United, the 2010 Supreme Court ruling that equated political giving with free speech and removed many of the limits on campaign spending by organizations and corporations.

“Campaign dollars have shifted because of Citizens United, money has shifted to the left and right,” said Rodolfo Espino, an associate professor of politics at Arizona State University.

And her fundraising from those groups is not hurt by the fact that her district is expected to be hotly contested again, he said.

“McSally is flush with money because she’s in a swing district. That’s why she’s raised the money she has and why she’s been so successful at it,” Espino said.

But McSally’s campaign manager said that more than “10,000 individuals contributed during the last quarter, with an average donation of less than $75.”

“That’s a strong sign of how widespread the approval is for her first few months in office and the significant accomplishments she’s already achieved,” said campaign manager Weston McKee.

He was not shy, however, about calling the campaign’s fundraising “incredibly impressive numbers, especially given how early it still is.”

After McSally and Sinema, Rep. Ann Kirkpatrick, D-Flagstaff, reported the most in campaign fundraising for the first half of year, raising $422,919 for her House account. She also raised $432,540 for a 2016 Senate bid that she announced in late spring.

Rep. Trent Franks, R-Glendale, took in the least among incumbents, reporting that he raised $58,338 in the first half of the year.