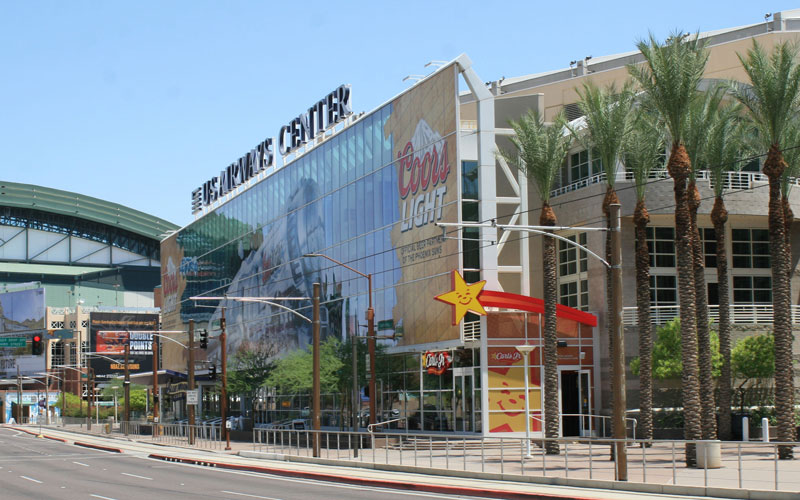 From 1996-2003, the Suns and Coyotes shared US Airways Center. If the Coyotes’ legal battle with Glendale sends them out of Gila River Arena, they could end up back where they started. (Photo by Michael Nowels/Cronkite News) 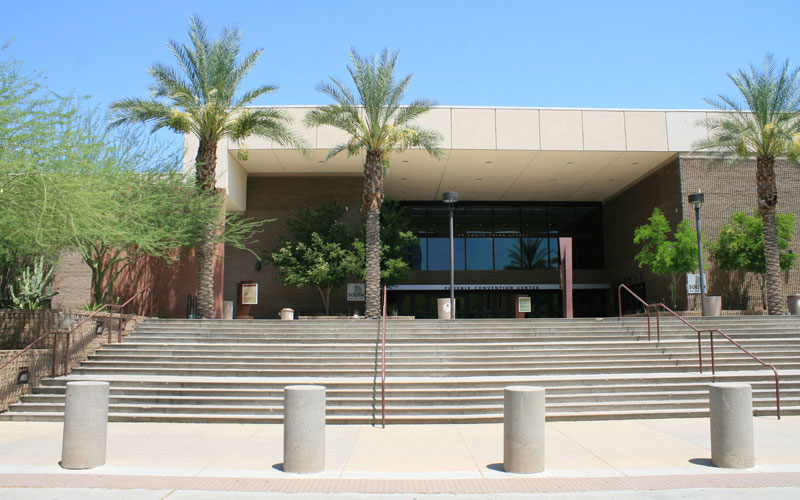 Phoenix City Councilman Michael Nowakowski suggested the land currently occupied by the south building of the Phoenix Convention Center as a possible location for a new downtown arena. (Photo by Michael Nowels/Cronkite News)

Ice hockey in the desert?

To some, it seemed totally unsustainable.

“To support four major franchises is not the easiest thing in the world, and I think it’s going to be a little bit more difficult than people estimate,” then-Suns star Charles Barkley told the Canadian Broadcasting Corp. before the Coyotes arrived in Phoenix.

The Coyotes’ 19-year odyssey in the desert has indeed been difficult, especially since the team moved to Glendale in late 2003. While the franchise’s ownership group says it is committed to the Valley, criticism of the team’s long-term viability in Arizona has grown.

With the Glendale City Council having voted to void its 15-year, $225 million lease agreement with the team, the Coyotes could be left searching for a new home, pending the outcome of an ongoing legal battle.

How we got here

The Coyotes played at US Airways Center, along with the Suns, from the time they arrived in the Valley until partway through the 2003-04 season, when they moved to a new arena in Glendale with an agreement that Phoenix City Councilman Michael Nowakowski called a “sweetheart deal.”

According to The Arizona Republic, Glendale borrowed $180 million to build the arena to lure a team that had been playing its games as a secondary tenant in a basketball-first building.

Glendale Arena – now Gila River Arena – was one of the first of its kind: A venue that’s part of a larger suburban development intended to create a sports and entertainment hub.

The Coyotes began their stay in the West Valley in late 2003, but the surrounding Westgate Entertainment District struggled through delays and did not open until late 2006, more than a year behind schedule and months after the debut of the Cardinals’ University of Phoenix Stadium.

Bob Lieb, founder of Lieb Advisors LLC, has worked with teams to finance arena deals across North American and Europe. Lieb said that it is nearly impossible to grow an arena from scratch without pre-existing cultural infrastructure.

“If you’re going to build a stadium where the minute you walk in the door, you start to hemorrhage money,” he said, “and the arena is located in an area that already has bars and hotels and restaurants that can handle the overflow, then that’s a much different platform than some featureless arena or stadium sitting out in the middle of nowhere.”

Using Lieb’s logic, the idea of the Glendale development was not necessarily incorrect; it was the sequencing of projects that could be to blame for deficiencies, with the decision to complete the arena before finishing Westgate straining the situation before the Coyotes ever skated there.

The Coyotes suffered financial turmoil over the next several years, eventually declaring bankruptcy in 2009. The NHL took over operations that year and sold the team four years later to IceArizona, led by Anthony LeBlanc.

The new ownership group negotiated a new lease with the city that calls for Glendale to pay the team $15 million per year in arena management fees. Many in the Valley considered it another lopsided agreement.

After two years operating under that arrangement, the Glendale City Council voted in June to void the contract, basing its argument on a state conflict-of-interest statute.

While that legal battle plays out, Nowakowski and Phoenix Mayor Greg Stanton have suggested that if there is a split between the Coyotes and Glendale, the team could return to its original Arizona home and former namesake, Phoenix.

Nowakowski said he believes Phoenix is superior to Glendale as a sports destination.

Viability of a move

Stanton said last month that after the Glendale City Council had voted to void the contract, he reached out to the Coyotes to offer them Phoenix as a home.

A major complaint from fans who attended games at US Airways Center before the team moved to Glendale was that some sections did not have a full view of both nets because the arena was not originally built with the NHL in mind.

Considering that issue, a new arena may be a long-term requirement if the Coyotes were to return to what Stanton called the “one and only heart of this Valley and state.”

According to Phoenix officials, the Suns have already reached out to the city about the possibility of a new arena for themselves and potentially the Phoenix Mercury and Arizona Rattlers. The Suns declined a request for an interview with owner Robert Sarver for this story.

US Airways Center is just 23 years old but it is the eighth-oldest arena in the NBA, and will be the third-oldest in the Western Conference when new buildings are completed in San Francisco and Sacramento.

The Suns operate US Airways Center, so the Mercury and Rattlers have to negotiate with the Suns to play in the arena. Nowakowski said the Coyotes would have to do the same to play there.

“The Suns have a big investment in the facility – they manage it,” said Jerry Colangelo, the Phoenix sports mogul and former Suns owner who helped negotiate and finance the deal for the arena. “They create a lot of revenue for the city. So if anyone wants to use the building, that’s just the way it’s structured.”

Nowakowski said Sarver approached the city about a potential new arena roughly a year and a half ago, and recently told city officials he was open to the idea of the Coyotes playing at US Airways Center if they needed a home. According to Nowakowski, Sarver did make it clear that in that event, the Coyotes should not expect to receive $15 million per year like they have from Glendale.

Stanton said that he reached out to Sarver regarding the Coyotes. He agreed that Sarver was receptive, but the mayor said that it was too early to comment on a potential arena.

“We have a decades-long good working relationship with the Phoenix Suns,” Stanton said. “And that’s not going to change while I’m mayor and I hope it doesn’t change for any future mayors. The Phoenix Suns are really, really important to the entire city.”

Anatomy of an arena agreement

US Airways Center was one of the first arena projects to use a public-private finance model. According to multiple sources, then-sponsor America West paid $26 million, the city put up $35 million and Suns ownership contributed $45 million toward the $110 million spent to build the facility.

Colangelo said the deal was a 50-50 split for the first $70 million with the Suns picking up the rest of the tab beyond that.

This model has gained traction in arena and stadium finance across the nation as taxpayers have begun to balk at accepting the bill for multimillion-dollar venues when team owners and sponsorship partners may be able to afford or offset the price tag they set.

The Milwaukee Bucks are using this model in a plan that was approved by the Wisconsin State Senate Wednesday.

The proposal to pay for a potential new arena in Milwaukee would cobble together financing from current and former Bucks ownership, the city and the state of Wisconsin.

“It seems now in order to get any public financing, you need a multi-use project to provide political cover for a governmental body to devote public monies,” Lieb said.

Lieb and Nowakowski both said the type of creative financial thinking driving the Milwaukee plan would be useful for a potential downtown Phoenix arena.

Nowakowski suggested 100 N. Third St., where the south building of the Phoenix Convention Center sits, as a possible location. While that building was included in last decade’s remodel, the major focus of that massive project was the addition of the west building and the replacement of the north building.

“Connect it to our convention center,” he said. “Think about it: It’s not just a convention center but it would be connected to an arena that can sit 20,000 people, so all of a sudden, we can bid for the convention, the Republican or the Democratic Convention.”

Colangelo said that the location of any new arena should be a subject of negotiation.

“The fact that the Suns will have to explore all opportunities is just part of the business,” he said. “It’s also part of the business for the city to do everything it can to make sure they stay downtown. So ultimately, in some way, shape or form I still see a private-public partnership of some kind.”

If a new arena were to be built in Phoenix, financing the project could be tricky, especially considering that the convention center renovation is not yet 10 years old and cost taxpayers $600 million, according to the center’s website. The Arizona Republic reported earlier this year that the city-owned Sheraton Downtown Phoenix Hotel, which opened to support potential large-scale conferences at the center, has lost $28 million since 2008.

The money spent to pay down the city’s debt on the Sheraton has come from the city’s sports facilities fund, which was created to help pay for new arenas and renovation of old ones. That money has come through a tourism tax that spares Phoenix citizens but takes advantage of the Valley’s tourism draws.

The city is currently trying to get out from under the Sheraton by selling it. Nowakowski said that is the first step in building up that sports fund, though he admits there would still have to be more creative thinking and cooperation from big business owners in the downtown Phoenix area. Nowakowski suggested those business owners could contribute money to finance a new building.

He calls that mentality the “Team Phoenix” approach.

That approach fosters all kinds of creative ideas for Nowakowski, some of which aren’t just outside the box; they’re outside the building.

He suggested a field similar to that of the Cardinals, which has a system to move outside of University of Phoenix Stadium and soak up the sun when it’s not in use.

“If we have the Rattlers, why can’t we have a retractable field that comes out if its turf and then comes into, like, a bandstand on the outside and you can have a free concert prior to the games?” Nowakowski asked.

In the event that this new arena idea comes to fruition, a 23-year-old building that took upwards of $100 million to build would sit unused in the middle of downtown. Nowakowski also has plans for repurposing that.

“If you take out all the chairs and the suites, it’s really just a big shell,” he said. “So you can have a three-story urban mall concept where on the first floor can actually be an urban park where people can come enjoy an urban park with free concerts and a food court and all the different amenities that an urban park provides and at the same time, an urban mall.”