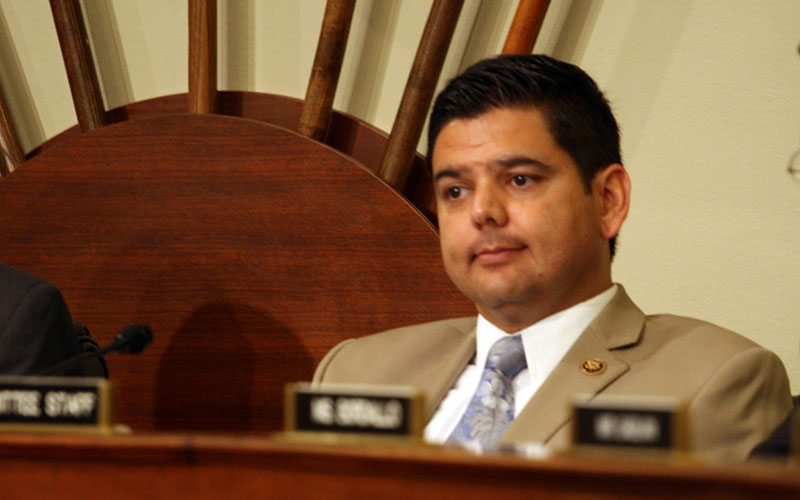 Rep. Raul Ruiz, D-California, said he understood the Navajos’ reluctance to accept a deal that was reached by leaders who are no longer in office, but other lawmakers said it was past time to act on the deal. (Photo by Aubrey Rumore)

WASHINGTON – The Navajo Nation cannot support a plan to divide more than 20,000 acres of the former Fort Wingate with the Zuni tribe, a Navajo official told a House committee Wednesday.

Navajo Council Speaker LoRenzo Bates said a House bill that spells out what had been informally agreed to two years ago contains mistakes. The 2013 proposal to divide roughly 20,000 acres of Fort Wingate in New Mexico, with green areas going to the Navajo and blue to the Pueblo of Zuni. The tan area would be retained by the Army. (Map courtesy House Natural Resources Committee)

He said there are also questions about the deal’s impact on gaming rights, about sacred sites on the land and concerns about hazardous waste left behind by the Army.

“Our land is everything to our people, my people,” Bates said in testimony to a House Natural Resources subcommittee.

The tribe’s position appeared to irritate Rep. Don Young, R-Alaska, who was part of the 2013 negotiations between the Zuni and Navajo that resulted in the bill heard Wednesday.

“I want to get this done,” said Young, the chairman of the subcommittee. “It’s my intent to go forth with this legislation.”

Zuni Gov. Val Panteah urged the committee to do just that, saying both tribes could benefit from building on “the agreement our predecessors worked out three years ago.”

“I am not here to recount or debate history, to argue over who has the closest or longest ties to the Fort Wingate lands,” Panteah said in his prepared testimony. “Those arguments have been exhaustively put forth by both tribes for the past 20-plus years.”

At issue is the former Fort Wingate, an Army base east of Gallup, New Mexico, that began operations in 1860 and ceased in 1993.

After years of negotiations between the tribes and the federal government, a deal was signed in 2013 by then-leaders of the Zuni and Navajo tribes, said Rep. Steve Pearce, R-New Mexico. Both sides said at the time that they would take the deal back to their respective tribal councils for review.

Pearce’s bill would codify that 2013 agreement. But the officials who signed that informal agreement are no longer in office, and the Navajo Nation Council voted in April to reject the plan as written.

“Land issues are important and complex, and require that we, as elected leaders, make hard choices,” Bates said in his testimony. While the Navajo rejected the bill, he said, they “look forward” to working with Congress and the Zuni “to bring this matter to a speedy and equitable resolution.”

But Young said he was “not going to tolerate” any further delays.

“I’m not going to put up with this, ‘I signed it but I didn’t sign it,'” Young told Bates.

But Rep. Raul Ruiz, D-California, said he understands Bates’ position, noting that both tribes have new leaders since the land deal was proposed.

Pearce, in his opening statement, said that is no excuse, noting that the Declaration of Independence and Constitution wouldn’t exist if they had to be re-evaluated and re-signed with every wave of new leadership.

“Having watched this process for over 10 years, I’m anxious to see that the two tribes get access to the land,” Pearce said. “Let’s move the process forward.”

Panteah said it’s time to end a fight that has “dragged on far too long.”

“While the Zuni and Navajo may have been historic enemies, we need to realize that our common interests far outweigh our differences,” he said.