A girl gets lunch from a summer nutrition site run by St. Mary’s Food Bank at the Maryvale YMCA. After school is out for the summer, the percentage of children getting free lunches plummets from levels served during the school year. (Photo courtesy St. Mary’s Food Bank) 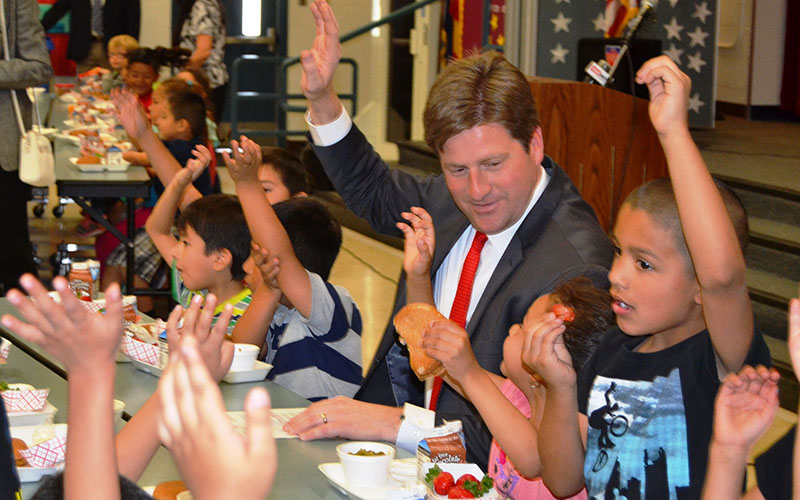 Phoenix Mayor Greg Stanton shares a table with at a Kids Cafe after-school meal site at Garfield Elementary School in Phoenix. After school is out for the summer, getting meals to kids like this becomes more of a challenge for officials. (Photo courtesy St. Mary’s Food Bank)

WASHINGTON – Arizona had the nation’s biggest drop in kids getting free summer meals between 2013 and 2014, a time when most states saw increases in the number of children reached, a recent report says.

The Food Research and Action Center report said the average daily number of kids in the summer meal program in Arizona fell from 68,743 in 2013 to 56,131 last year, an 18.3 percent drop.

At that level, experts say, just 12 percent of children who qualified for free or reduced-price meals during the school year were getting meals last summer.

Despite the drop, Arizona was still doing better than some states, ranking 34th overall for the portion of needy children reached by its summer meals program.

Nationally, 16.2 percent of needy kids were served last summer, with the District of Columbia leading the pack at 59 percent reached and Oklahoma finishing last at 6.7 percent.

Arizona officials and nutrition advocates could not explain last year’s drop, but said they are working hard to reverse the trend this summer.

Numbers for 2015 won’t be available until after this summer. But one positive indicator is that the number of “feeding sites” in the state has grown from 885 last summer to 1,061 as of Monday, said Shawn Tellford, children youth outreach manager for the Association of Arizona Food Banks.

Mary Szafranski, associate superintendent for the Health and Nutrition Services Division of the Arizona Department of Education, pointed to several outreach and marketing efforts aimed at boosting the program’s reach. The state is working with sponsors to increase the number of sites, holding town hall meetings and working with local governments.

“Mayor Greg Stanton of Phoenix has challenged other mayors to work with their community, to inspire, and motivate other entities to become sponsors of the summer food service program,” Szafranski said.

That sparked the “one more” challenge, in which the department pushes sponsors to “increase serving by maybe one week or one day, or increase their sites by one site,” Szafranski said.

The U.S. Department of Agriculture this summer also launched a “Summer Meals Site Finder,” a website aimed at helping “children, parents, and others quickly and easily find summer meal sites near them,” according to a department statement.

“We have to be creative and innovative in drawing interest in that child to leave their home to attend the feeding site,” Szafranski said.

That entails bringing on sponsors that have connections to the community and a trusting relationship with families, so parents will be comfortable letting their children go to a feeding site, she said.

Szafranski noted that Arizona has an additional challenge – once a feeding site is established, sponsors have to convince kids to go there when it’s 120 degrees outside.

“When the child isn’t going to school, and both parents are working, they are less likely to leave their house … to receive a meal, because hunger isn’t enough to get them to the summer food feeding sites,” Szafranski said.

Martinez said St. Mary’s is working diligently with other partners “to promote summer meals, not only our meals, but any way kids can access summer meals that they don’t have.”

Still, he said, “We certainly have the capacity to grow.”

The Healthy, Hunger-Free Kids Act of 2010 funded “federal school meal and child nutrition programs and increases access to healthy food for low-income children.” Meals in the federally funded program consist of fresh milk, a fruit and vegetable, and a grain and wheat component.

But Martinez said there is still need.

“In Arizona, nearly 29 percent of kids go to bed hungry every day,” he said.