Homeland Security Secretary Jeh Johnson at a Texas facility in 2014 where unaccompanied immigrant children are being processed after being caught crossing the Southwest border into the U.S. (Photo courtesy Department of homeland Security) 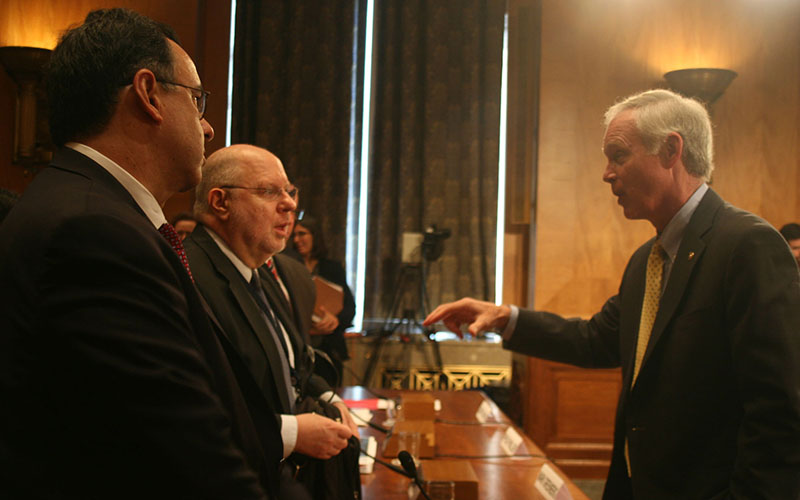 Sen. Ron Johnson, R-Wisconsin, speaks with the Justice Department’s Juan Osuna, left, and Mark Greenberg of the Departmnt of Health and Human Services, after the hearing on progress in efforts to deal with unaccompanied minor children at the border. (Photo by Aubrey Rumore) 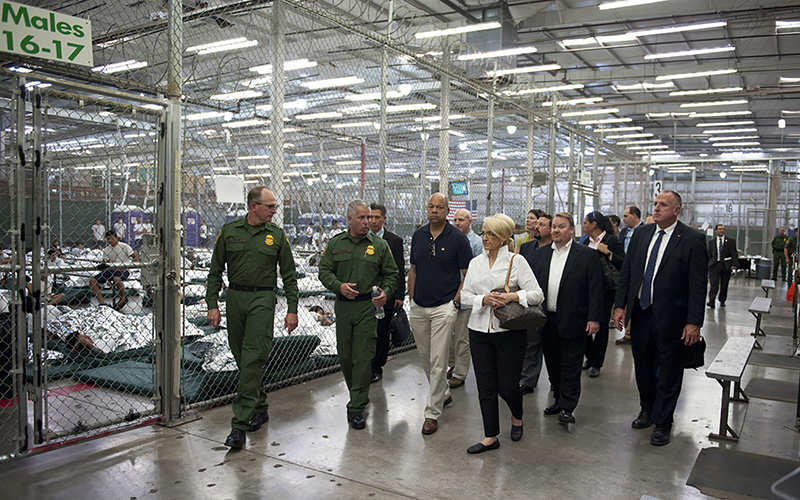 Border Patrol officers escort Homeland Security Secretary Jeh Johnson and then-Gov. Jan Brewer in the summer of 2014 on a tour of the department’s Nogales processing facility for immingrant children. (Photo courtesy the Department of Homeland Security)

WASHINGTON – Fewer than 2,000 of the 51,000 unaccompanied immigrant children who showed up at the Southwest border last year have been repatriated, a Senate panel was told Tuesday, a pace that critics said may have “incentivized” more migration.

Border officials testified that the number of unaccompanied minors showing up at the Southwest border is less than half of what it was last summer, when a flood of children led to what President Barack Obama called a “humanitarian crisis” at the border.

The process of processing

The government has vowed to return unaccompanied immigrant children to their home countries, but the process is more complicated than that:

But members of the Senate Homeland Security and Governmental Affairs Committee were clearly frustrated by delays in sending those children back home, after administration promises last year to “show these Central American countries we are sending people back.”

Failure to do so just creates an incentive for immigrant children to make the dangerous journey to cross the border where “90 percent or more of you will be able to stay,” said Sen. Ron Johnson, R-Wisconsin, the committee chairman.

Witnesses from the departments of Justice and Homeland Security said many of those children face persecution back home and most will qualify for asylum here. But they are caught here waiting for a hearing in backlogged immigration courts to hear their asylum pleas, the officials said.

Sen. Tom Carper, D-Delaware, said that while the “numbers are clearly down” at the border from last year, he said some of the immigrants who showed up then were recently told they might not get a hearing until November 2019.

“Clearly, this is unacceptable,” Carper said.

Juan Osuna, the director of the Justice Department’s Executive Office for Immigration Review, said immigration courts had a backlog of 449,569 cases pending on May 26, a “101 percent backlog increase over the past five years.”

“The immigration court system is facing many challenges,” Osuna testified. He said the department is “engaged in a focused process to hire many more immigration judges to adjudicate these cases.”

But Carper said the backlog is only part of the problem. The government still has “humanitarian responsibilities to protect the children in our custody” while they’re awaiting a court date, he said.

While many children remain, the committee was told that fewer are showing up.

After jumping from 12,000 in 2012 to 23,000 in 2013, the number of unaccompanied children at the border spiked to nearly 58,000 last year, said Philip Miller, assistant director of field operations for Immigration and Customs Enforcement. The number was down to 18,246 through the first three quarters of fiscal 2015, he said.

Johnson blamed the increase directly on the president’s 2012 announcement of Deferred Action for Childhood Arrivals, a program that delays deportation of immigrants who were brought here illegally as children.

“There’s one dramatic event that occurred in 2012 – the Deferred Action for Childhood Arrivals,” Johnson said, adding that while there were many contributing factors, DACA was “the primary cause for that surge.”

But Mark Greenberg, an acting assistant secretary of the Department of Health and Human Services Administration for Children and Families, said that violence in their Central American home countries plays a large part in the decision to migrate.

Johnson agreed that violence and threats are an underlying cause, but noted that homicide rates in most Central American countries have actually decreased in recent years. He again pointed to DACA as the cause for the continuing migration.

Whatever the cause, Greenberg said the government is better positioned now than it was last year “to be prepared to provide humanitarian care as rapidly as possible, given the myriad of factors that can impact migration flows.”

Johnson concluded by saying the government needs to start making “incremental improvements.” He called for a “step-by-step, continuous improvement plan,” to address the issue.