Defensive end Mike McAdoo (90) was an in-season addition to the Rattlers after Guy identified a weakness in the team’s edge rush. McAdoo was originally cut from the team before the season began. (Photo by Cuyler Meade) 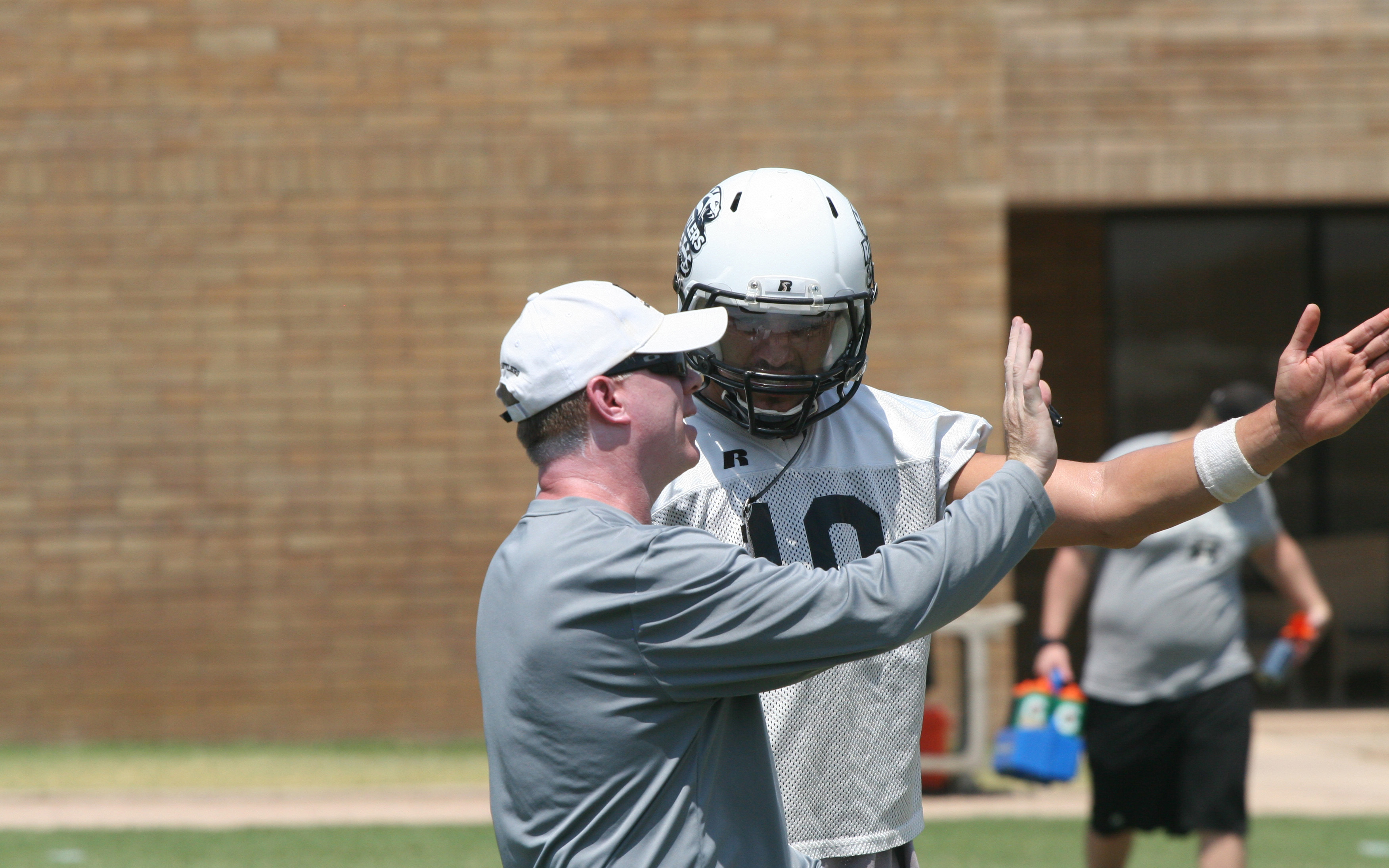 The partnership between coach Kevin Guy and quarterback Nick Davila has spawned three consecutive ArenaBowl championships, but Guy says they couldn’t have done it without a supporting cast.(Photo by Cuyler Meade) 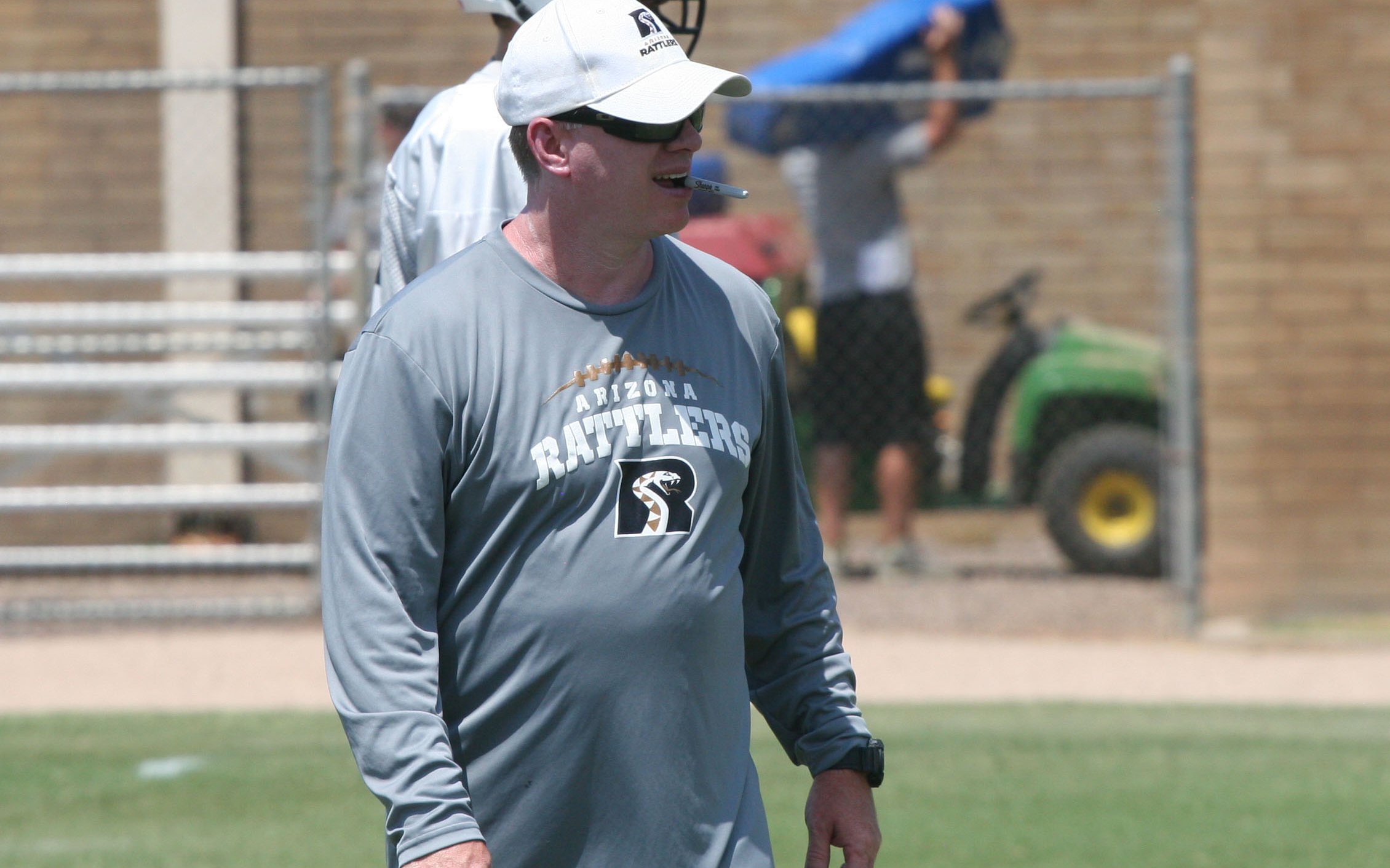 “Kevin Guy is a superstar,” said Rattlers owner Ron Shurts. “From a tone perspective and from a leadership perspective, that’s really the deal.” (Photo by Cuyler Meade)

Rookie Kerry Reed’s 12-yard touchdown reception from Nick Davila and the ensuing extra point in the 2011 Arena Football League championship game gave the Rattlers 70 points – the most ever scored by any team in an ArenaBowl – and a lead over the Jacksonville Sharks.

Then, less than a minute later, the record was broken.

That loss opened eyes for the Rattlers, whose owner Ron Shurts feared coming up short could become a trend for the franchise, which lost three straight ArenaBowls from 2002 to 2004.

“I was more concerned about not being the Buffalo Bills,” Shurts said, referencing the NFL team that lost four straight Super Bowls from 1991 to 1994, “where we get back for another and then we come up short again and again.”

The Rattlers would not go the route of the Bills. Instead, they won the next three ArenaBowl championships and appear primed to make a run at a fourth straight this season.

Rattlers head coach and general manager Kevin Guy attributes a lot of that success to the formation of a player-personnel department, a decision he says was driven by that ArenaBowl XXIV loss in 2011.

“It was after that season that I evaluated our program,” Guy said. “And I sat down with (Shurts), and I said, ‘This is what we need to take the next step. We’ve got to have a personnel staff.'”

Shurts gave Guy the go-ahead to create the department and hire a staff. What followed was the most sustained success that the AFL has seen since the early 1990s.

The pursuit of success in the AFL is complicated, with teams facing an additional challenge over their NFL brethren.

Among those players was Rod Windsor, who was notably absent at the 2011 ArenaBowl despite being Davila’s top receiver that season. Windsor had been recalled to the Cleveland Browns when the NFL lockout ended just weeks before the AFL title game.

Arena Football can be seen as just a way station for players hoping for another shot at the NFL or who want to stick around in football despite being too small for or not good enough to play at the game’s highest level.

The Rattlers wanted to see it as more than that. They wanted to be champions.

“You make the chess move like I’ve done in any other business,” said Shurts, a successful local entrepreneur. “But it’s a much bigger vision. The vision is, ‘How do you think outside the box? How do you do something different? What’s the big picture on how to get there, and how do we do something nobody else is doing to get there?’ We knew if we could do some things outside of the box that nobody else was doing, we knew that would give us a competitive advantage.

“So we decided to have player-personnel staff, and you make one move, you get one recruit, you get one guy that comes in that you recruit for an injured guy, and that can change everything,” Shurts said.

For Guy, who became the first coach in Arena Football history to win three consecutive ArenaBowls, a key to success is recognizing the nature of the beast.

“This business is not like running your normal corporate America 9-to-5 job,” Guy said. “We’re in the entertainment business, we’re in the talent business, and a lot of people don’t understand that. A lot of them think, like I said, that it’s more like corporate America and you run it like any other business. This business has more moving parts than any I’ve ever been around.”

Those moving parts include injuries, underperforming players, NFL call-ups and more. To help keep the machine functioning, Guy hired assistant general manager David Turner to head up a player-personnel staff that Guy credits as being one of the biggest elements of the team’s recent run of dominance.

As general manager, personnel decisions fall under Guy. But during the season, Guy must spend most of his time actually coaching the team, as opposed to poring over prospects.

“Coaches do a lot of the recruiting in the offseason,” Guy said. “The challenge is when the season starts. It’s hard to coach a team and identify player-personnel needs when injuries start happening, and you’ve got to get on the phone, and while you’re trying to coach the team, you’re looking for players. There’s not enough time in the day to do that. And that’s where I see a lot of teams at this level fail, because they don’t have the pieces in place.”

That’s where Turner and his staff come in. They spend all day every day identifying talent from college rosters, NFL practice squads, Canadian Football League teams and anywhere else talented football players might soon be looking for work. The staff sifts through hundreds of players and presents the Rattlers coaches with those candidates they believe have the best chance of fitting in with a championship program.

“A big part of what (Turner) does for us, and the personnel staff does, is they weed out a lot of guys that they know won’t fit our system,” Guy said.

One player the personnel staff identified was Mike McAdoo, a long-armed, athletic defensive end who watched from the injured reserve as the Baltimore Ravens won a Super Bowl following the 2012 season. At 6-foot-7, his listed 245 pounds is lanky by defensive lineman standards, according to Guy. After being released by the Ravens in 2013 and spending time in the Canadian Football League, McAdoo came to spring camp with the Rattlers in 2015, but was cut before the season began.

The Rattlers player-personnel staff kept an eye on McAdoo, and when Guy identified a weakness in the team’s edge pass rush in April, McAdoo got the call.

The in-season addition has produced, with at least one sack in every game in June. His two-sack, 7.5-tackle game in week 13 was good enough to earn him the AFL’s Ridell Defensive Player of the Week honors.

“He made some plays in camp but he wasn’t fast enough,” Guy said. “But sometimes when you cut a player and you bring him back, he comes back with a different mindset. So sometimes that works out for you.”

McAdoo says he still hopes to return to the NFL some day. While those desires might concern other AFL teams, Guy said the Rattlers are happy to support those dreams.

“That’s just part of the deal,” Guy said. “There are some teams out there that recruit older guys because they’re worried about them getting picked up (by the NFL). We’re just happy for them. We don’t care; we want to get the best athletes in here and get as deep as possible and have answers, so if they get picked up they get picked up.”

That’s what happened in 2011 with Windsor, whose departure to Cleveland, in part, inspired Guy’s adjustments. But in those days, before the player-personnel department, the Rattlers didn’t have the same answers.

Now the Rattlers are ready, whether it’s the NFL, an injury or the draw of other opportunities.

“What we believe in around here is competition,” Guy said. “You want to get as deep as possible. I look at competition as being healthy. You’ll get some coaches who don’t want to make tough decisions. Just set a guy in a position and that’s that. I’m all about letting these guys fight it out. If we can find a younger guy that can come in here and push some of these older guys, then, hey, we just got younger, and when you’re older that’s when some of the injuries come in. So you’ve got to keep a little bit of a fountain of youth going through your building.”

The Rattlers aren’t the only team in the AFL with an owner who’s supplied the organization with a player-personnel staff, but Guy says there’s at least one more thing setting them apart.