Recovery efforts have allowed the government to propose removing the gray wolf from the endangered species list, although a subspecies, the Mexican gray wolf, would still be protected. (Photo by Gary Kramer/U.S. Fish and Wildlife Service) 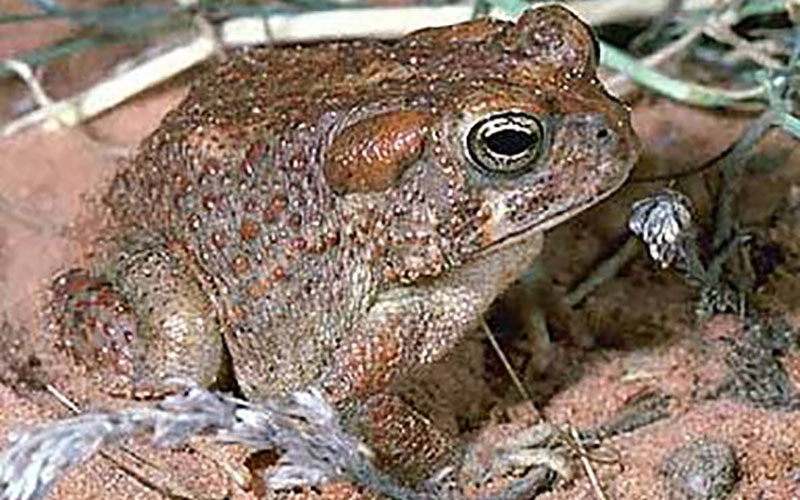 The Fish and Wildlife Service moved the Arizona toad one step closer to being declared an endangered species. The toad, found in several states, has disappeared from 75 percent of this historic range. (Photo courtesy National Park Service)

WASHINGTON – The federal government moved the Arizona toad closer to endangered status this week while dimming hopes for the gray wolf, which moved a step closer to losing endangered species protection altogether.

The moves were among dozens announced by the U.S. Fish and Wildlife Service, which said Tuesday that it was rejecting petitions to classify 10 species as endangered, but that it found evidence to move 21 others to the next step in the process.

“There’s still a number of steps before the species is placed on the endangered species list,” said Steve Spangle, a Fish and Wildlife Service field supervisor in Arizona.

He said that when the service gets a petition to list an animal as endangered or threatened, it must first “find information that the argument is plausible” based on current scientific evidence.

After a species clears the first hurdle, that are lots more in-depth biological factors that have to studied – and species may still end up not qualifying, he said.

But that didn’t stop advocates from celebrating – or lamenting – Tuesday’s announcements.

The Arizona toad was one of 53 amphibians and reptiles that the Center for Biological Diversity petitioned to get protection under the Endangered Species Act, said Jenny Loda, a senior attorney with the Tucson-based center.

“I’m not surprised,” the toad advanced, said Loda. “It’s been a candidate for federal protection before.”

The toad is most prevalent in Arizona, but can also be found in New Mexico, Nevada and Utah. But Loda said it is danger of being lost from “75 percent of its historic range,” because of loss of habitat and competition from another species of toad.

Arizona toads “really need flowing water,” but Loda said construction, dams and reservoirs create pools of still water that are better suited to the Woodhouse toad. As a result, she said, interbreeding and competition between the two toads have cut the Arizona toad population drastically.

Loda said that reptiles and amphibians have been declining in general and the Arizona toad “was actually a part of a larger campaign” to get them protection. Of the 53 animals in the center’s petition, Fish and Wildlife this week agreed to advance three: the Arizona toad, Cascade Caverns salamander and the Rio Grande cooter, a type of turtle.

The center’s other species weren’t the only ones turned away: The government also refused to consider a petition to move the gray wolf from “endangered” to the less-strict “threatened” status.

The wolf’s supporters had proposed the reduction instead of the wholesale delisting of the animal, which
the government has proposed because of what it calls successful efforts to bring the species back from the brink. Critics say that while there has been improvement, the wolf still needs protection.

The latest denial did not sit well with advocates like Rep. Raul Grijalva, D-Tucson, who called the service’s action “delusional.”

“Despite its good work in many areas, the Fish and Wildlife Service seems determined not to protect gray wolves no matter what the law, or the science, has to say about it,” Grijalva said in a prepared statement.

That was echoed by Collette Adkins, another Center for Biological Diversity senior attorney, who said she thinks Fish and Wildlife officials “really want to be out of the wolf-recovery business.”

“There are still so many areas that could support wolves, but don’t,” Adkins said, because of what she called pressure from ranchers to keep the animals away from cattle.

Fish and Wildlife has made progress on the gray wolf’s recovery, “But the problem is, they’re not recovered.” She said federal officials just “want to wash their hands and be done with it.”