A ship is loaded for export in Baltimore. Backers say the Export-Import Bank helps U.S. businesses compete, but critics say the bank is unnecessary. (Photo by Bob Nichols/USDA) 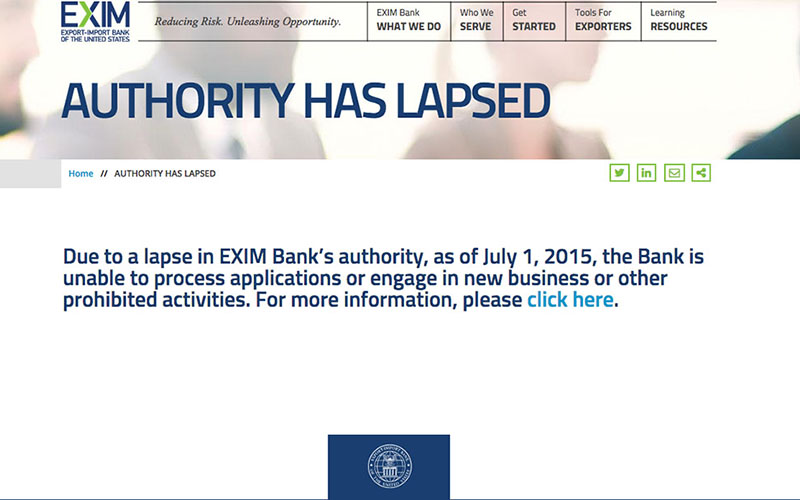 WASHINGTON – Authorization for the government bank that has helped more than 100 Arizona businesses do international business expired early Wednesday, leaving the Export-Import Bank in “uncharted territory” for the first time in its 81 years.

The U.S. Export-Import Bank’s authorization lapsed at 12:01 a.m. Wednesday as a bill to reauthorize the bank remained stalled in Congress, which is on recess this week.

The expiration does not mean the bank will close its doors to the companies it is currently doing business with, as it has funding to operate for the rest of the fiscal year.

But it will not be able to open new lines of credit, provide financial insurance or help guarantee working capital for businesses until – or unless – Congress votes to reauthorize it.

That won’t happen if opponents like Sen. Jeff Flake, R-Arizona, have their way. He called the bank a “corporate welfare program.”

But supporters say that without the bank, U.S. companies will be at a disadvantage in global markets.

The White House said this that the bank helped more than 7,500 businesses export more than $235 billion worth of goods between fiscal years 2009 to 2014.

In Arizona, “Ex-Im” helped 119 businesses that exported more than $1.1 billion in the same period, and 92 of those firms were small businesses, according to the White House.

One of those 119 companies is ServerLift, a Phoenix-based manufacturer. CEO Ray Zuckerman said “the fact that we have someone behind us” is a big plus when closing deals with companies overseas.

Zuckerman said his company does 30 percent in international sales annually and has used the bank to move jobs from Asia back to the U.S. He said there should not have been a problem reauthorizing the agency.

“I don’t understand the issue, the bank has historically been stable,” he said Wednesday.

In a statement posted to the bank’s website Tuesday, Senior Vice President Angela Freyre said the bank is “fully appropriated through FY2015 and will be able to continue operating” even after its authority expired.

The Export-Import Bank was established in 1934 as the official export credit agency of the federal government, and it became an independent executive agency in 1945.

It is one of the few government-funded agencies to turn a profit. The U.S. Chamber of Commerce said the bank returned $674.7 million to the Treasury in fiscal 2014, bringing the total returned to the government to $7 billion since 1990.

It was successfully reauthorized 16 times – until this week.

Witney Schneidman, a member on one of the agency’s advisory committees, said the lapse in authorization jeopardizes hundreds of thousands of jobs.

“It puts the U.S. at a big disadvantage in terms of advancing our commercial interests,” Schneidman said Wednesday.

He said that help from the bank has led to the creation of more than 160,000 jobs domestically.

Although current loans will “still be serviced,” this lapse pushes other businesses and government officials into “uncharted territory,” Schneidman said.

But in an emailed statement Wednesday, Flake said the agency has little relevance and that he is “pleased that its authorization has expired.”

Flake said the bank has benefited “particular industries and firms through what amounts to a corporate welfare program.”

“The bank has helped us close deals and we are in 60 countries because of their help,” Zuckerman said. “I think this lapse is a huge problem for companies looking to bid offshore.”

Jeff Barth, CEO of Tempe-based JWB Manufacturing, said he has not needed to use the Export-Import Bank for his company, which does a large share of its business overseas. But he does see how the bank “provides a good option” for smaller businesses.

“I think it serves a role and purpose. It opens the door to potentially more exporting,” he said, adding that the bank also ensures payment for goods.

But Barth agrees, to a certain extent, with what bank opponents have argued. While smaller businesses may need the bank, he said, growing businesses should stay away from the “subsidized program” and search for other financial options.

But Schneidman says he hopes “common sense will prevail in Congress,” and that both liberals and conservatives reauthorize “this profit center of the U.S. government.”