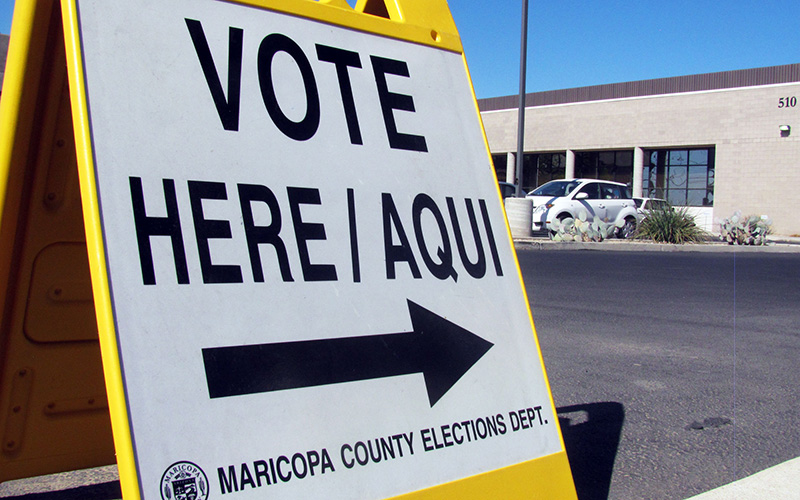 Kansas and Arizona were trying to force the federal government to change its voter registration form, which only requires applicants check a box attesting to their citizenship. (Photo by Cronkite News) 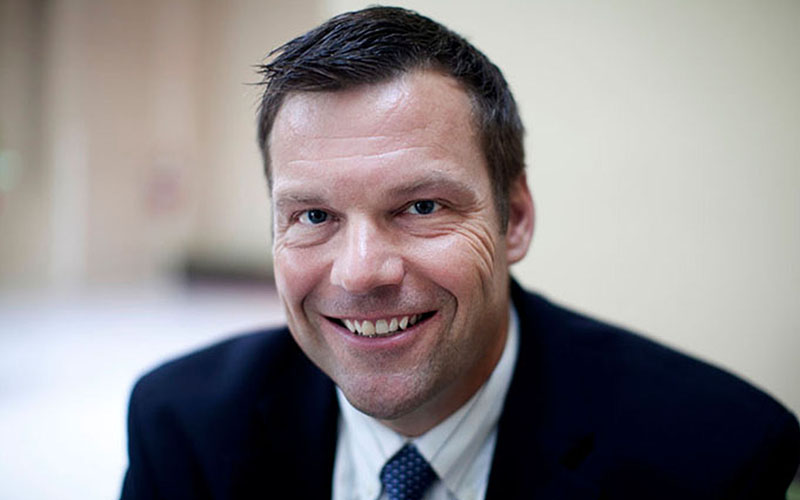 Kansas Secretary of State Kris Kobach said current federal law is open to possible voter fraud, and that critics would be back in court again to change it. Arizona joined Kansas in the latest court case. (Photo by Lizzie Chen) 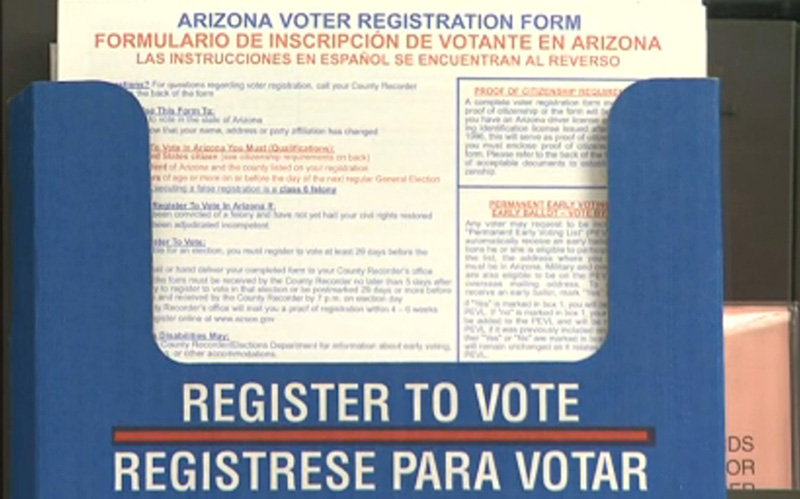 Arizona requires proof of citizenship for voter registration. But the Supreme Court had said that the state must also accept the federal form, which does not require such proof. (Photo by Cronkite News)

WASHINGTON – The Supreme Court on Monday rejected an appeal from officials in Arizona and Kansas who wanted federal election officials to require proof of citizenship for people registering to vote.

Arizona and Kansas have required such proof for several years from people registering to vote in their states, but people using the federal “motor voter” registration form need only check a box attesting to their citizenship.

The states had petitioned the federal Election Assistance Commission to change the form to require proof in their states. But the EAC refused and the 10th U.S. Circuit Court of Appeals agreed with the commission.

The states then appealed to the Supreme Court, which declined without comment on Monday to hear that appeal, letting the circuit court decision stand.

Elections officials with the states vowed that the fight is not over.

“We will be approaching the election commission with another request on language on the federal form that accurately represents the law and avoids loopholes,” Kansas Secretary of State Kris Kobach said after the high court’s decision.

But advocates said the court’s decision gives a glimmer of hope in states where they say voting rights are being suppressed through burdensome proof of citizenship requirements on state voting forms.

“The (Arizona) secretary of state wants to make it more difficult for people to register and vote,” said Sam Wercinski, executive director for the Arizona Advocacy Network. “Ten thousand voters are being denied the right to vote by the restrictive policies of the secretary of state – one person being denied the right to vote is too many, let alone thousands.”

In the meantime, Arizona election officials said the state would continue the current practice of accepting federal registration forms as well as the stricter state forms, and maintaining separate federal and state voter rolls.

“Citizens have the choice which form to use, the federal form or the state form. After today’s decision, we continue to not be able to require the citizen to provide proof of citizenship for the federal form,” said Matt Roberts, a spokesman for Arizona Secretary of State Michele Reagan.

People who use the federal form can provide additional information – such as a Social Security or driver’s license number, for example – that lets the state verify their citizenship. If they do provide that information, they will be eligible to vote in both federal and state elections, Roberts said.

He said that 1,135 Arizonans have not provided that proof of citizenship and so can only vote in federal, not state, elections. Providing separate ballots for such voters is not a challenge, Roberts said.

“Nearly every person in Arizona gets a different ballot depending on where they live, thousands of ballots every year, all in different styles,” he said.

Kobach said the federal form makes it too hard to weed out noncitizens from voting rolls.

“The federal form creates a small loophole which can allow noncitizens to vote,” he said.

Kobach said voters in Arizona and Kansas “voted overwhelmingly” for measures to require proof of citizenship, like Arizona’s Proposition 200. He claims that people across the political spectrum support such verifications and insists that they do not decrease voter participation.

This is the second time Arizona has lost at the Supreme Court, which ruled in 2013 that the state had to accept federal voter registration forms. Wercinski said the federal form is easier for people to use but still has safeguards against voter fraud.

“Arizona citizens and Americans across this country can utilize a simpler process to register and vote that still requires people to be eligible citizens, which is utilizing the federal form rather than the state form in Arizona,” he said.

“It’s good,” said Flanagan, who deals with Arizona among other states. “It means that states don’t have authority to rewrite the rules on voter registration.”

But Kobach said Supreme Court’s denial “is not very surprising,” and that supporters of citizenship verification will likely be back when they have a stronger case. He noted that they won their case at the district court level and “believe the Constitution is on the side of Arizona and Kansas.”