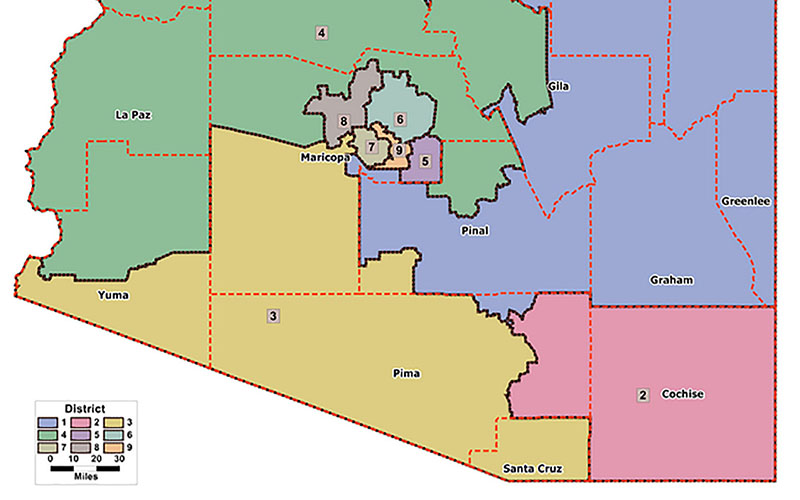 The court said the voters were reaffirming a “core principle” of government when they voted to take the power of redistricting away from lawmakers and give it to an independent body. (Photo by Soyenixe Lopez)

WASHINGTON – When voters approved the Arizona Independent Redistricting Commission they were reaffirming a “core principle” of government, the Supreme Court said Monday, “that voters should choose their representatives, not the other way around.”

The court ruled 5-4 to uphold the commission that was approved by Arizona voters in 2000 as Proposition 106, in an attempt to curb gerrymandering of legislative and congressional districts.

But Justice Ruth Bader Ginsburg disagreed, writing for the majority that the elections clause cannot be invoked “to disempower the state’s voters from serving as the legislative power for redistricting purposes.”

“The people of Arizona turned to the initiative to curb the gerrymandering and, thereby, to ensure that members of Congress would have ‘an habitual recollection of their dependence on the people,'” Ginsburg wrote, citing the Federalist Papers.

In the main dissent, Chief Justice John Roberts accused the majority of “deliberate constitutional evasion” by “revising ‘the Legislature’ to mean ‘the people.'”

“The court’s position has no basis in the text, structure or history of the Constitution, and it contradicts precedents from both Congress and the court,” he wrote in a dissent joined by Justices Samuel Alito, Clarence Thomas and Antonin Scalia.

That sentiment was echoed Monday in a joint statement from Arizona House Speaker David Gowan and Senate President Andy Biggs, who said “clear constitutional design had been demolished in Arizona by five lawyers at the high court.”

“We are disappointed that the Supreme Court has decided to depart from the clear language of the Constitution. The Framers selected the elected representatives of the people to conduct congressional redistricting,” the statement said.

But voting-rights groups hailed the decision, which they said would be felt in any state where voters can petition issues to the ballot.

“Not only is it a victory for retaining this nonpartisan independent redistricting body, but it also strategically is an important victory for legislating through the ballot box,” said Sam Wercinski, executive director for the Arizona Advocacy Network.

Had the court ruled otherwise, Wercinski said, it could have put at risk all other citizen-passed laws. He criticized the Republican-dominated Legislature for filing the challenge in the first place.

“I think it’s unfortunate that every year we see a Republican majority backed by big-money special interests challenging laws that have been passed by the voters of Arizona,” Wercinski said.

Proposition 106 was approved overwhelmingly by state voters in 2000. It created a five-member commission – two Democrats, two Republicans and one independent – that is charged with drawing congressional and legislative districts from scratch after every decennial Census.

Common Cause President Miles Rapoport said Monday’s decision affirms Abraham Lincoln’s declaration that “ours is a government of, by and for the people.”

“Now that our highest court has given their initiative its blessing, we’re hopeful that citizens and legislators alike in other states will push politics aside and create independent bodies to draw truly representative districts after the 2020 Census,” Rapoport said.

Kathay Feng, national redistricting director for Common Cause, said the group will be working “across the country to end political gerrymandering through the creation of citizen-driven commissions like the one in Arizona.”

Rep. Raul Grijalva, D-Tucson, said in a prepared statement that the court ruling validates the demands of Arizonans to leave partisan politics behind when it comes to drawing district boundaries.

“Elections are not games for politicians to rig, and this court decision makes clear that public officials cannot trump the will of the people in an attempt to stack the electoral map in their favor,” his statement said.