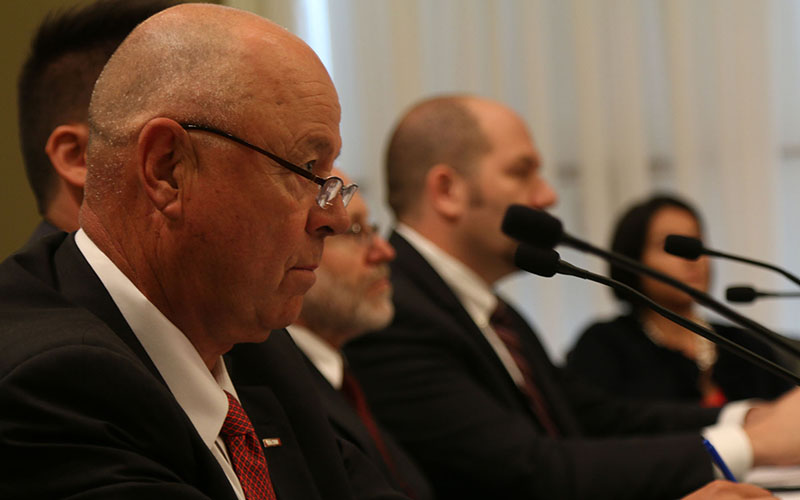 Tom Davis, general manager of the Yuma County Water Users’ Association, said most water facilities maintained by the Bureau of Reclamation are 50 to 100 years old. (Photo by Jamie Cochran)

WASHINGTON – Yuma water official Tom Davis said the West’s aging water infrastructure is beyond patching and in need of “major replacement and rehabilitation” – but that can’t happen until federal officials inventory the problem.

Davis, the general manager of the Yuma County Water Users’ Association, was in Washington Thursday to testify for a bill that would force the Bureau of Reclamation to survey its aging facilities and prioritize repairs in regular reports to Congress.

Such a list is critical, he said, when bureau facilities are typically 50 to 100 years old and repair costs for those facilities – dams, canals and more – have been estimated at up to $100 billion.

“The Yuma County Water Users’ Association recognizes that federal funding is limited and knows the federal government must allocate funds in a fiscally responsible manner,” Davis said in prepared testimony for a House Natural Resources subcommittee.

The bipartisan bill would require the Interior Department to “publish reports detailing specific repairs and rehabilitation needs” at bureau facilities, according to a committee staff summary of the bill.

The bill would “put a long list of all the projects of the Bureau of Reclamation’s inventory so we know what they look like, what they expect, time tables in which they need to be repaired,” said Rep. Paul Gosar, R-Prescott, and the lead sponsor of the measure.

“So we can actually start making wiser choices on how we repair those things,” Gosar said.

Bureau of Reclamation Commissioner Estevan Lopez told the committee that the bill is consistent with a strategy the agency has been developing for the past year to assess and report on “infrastructure investment needs for Reclamation’s approximately 4,000 unique assets.”

He said in his prepared remarks that the draft strategy focuses on “improving data collections, analysis, and reporting on the condition of Reclamation-owned infrastructure” and more.

The bureau’s inventory includes “476 dams and dikes creating 337 reservoirs, and title to 76 hydroelectric power plants,” according to the committee staff memo.

Davis said many of these facilities are a century old and, even though they have been maintained over the years,
they are in need of major renovation.

In the drought-stricken West, preserving water facilities is a top priority. “If we don’t maintain these facilities … we can’t maintain our ability to store water,” Davis said.

Gosar, one of five Arizona lawmakers signed on to the bill, said “Arizona’s whole livelihood has been built on” saving water. Prioritizing repairs is mandatory for moving forward, he said.

Davis said that the cost of needed repairs in 2012 alone was estimated at $2.6 billion, but the problem cannot be ignored.

“I think you have to maintain, at minimum, the storage these structures were designed for,” he said.

More important than the money to Davis was the value of the 100-year-old structures.

“If some of these facilities are lost in today’s society … I don’t think they could ever be replaced,” he said.

Davis stressed that until an adequate damage assessment is made, no action can be taken.

And Gosar said that water is too valuable in the West to let that happen.

“As you know, whiskey is for drinking, and water is for fighting over in Arizona,” he said.