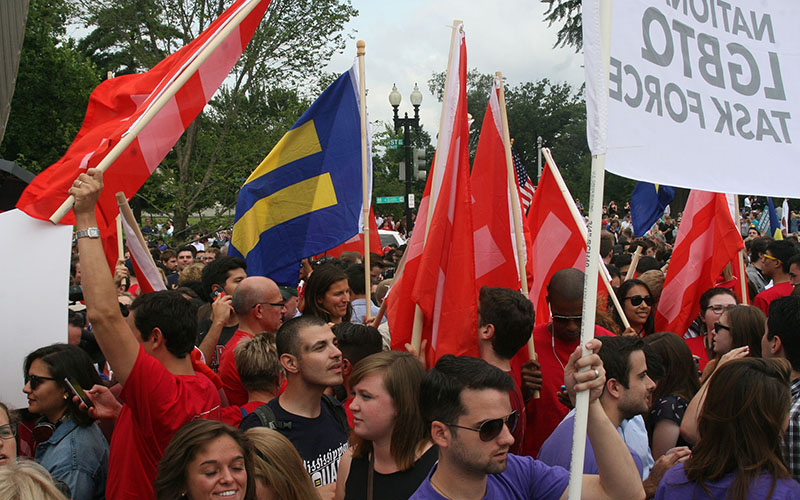 A number of national gay-rights groups turned out at the Supreme Court for its same-sex marriage decision, which coincidentally came on the same day as gay-rights rulings from past terms of the court. (Photo by Nihal Krishan)

Justice Anthony Kennedy wrote that the “fundamental right to marry” cannot be denied based on a couple’s gender, but dissenting judges called that an overreach by “five lawyers” on the court. (Photo by Nihal Krishan) 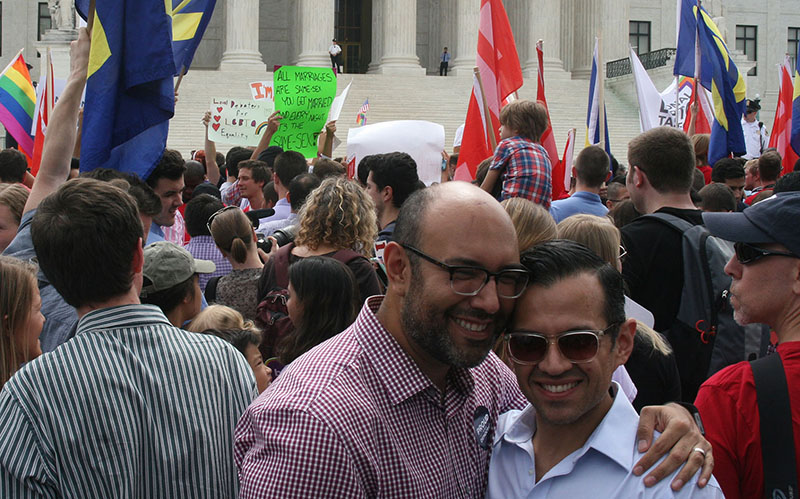 Arizona native Ruben Gonzales, left, hugs his husband, Joaquin, outside the Supreme Court Friday. The two were married in Washigton, D.C., before same-sex marriage became the law of the land Friday. (Photo by Nihal Krishan) 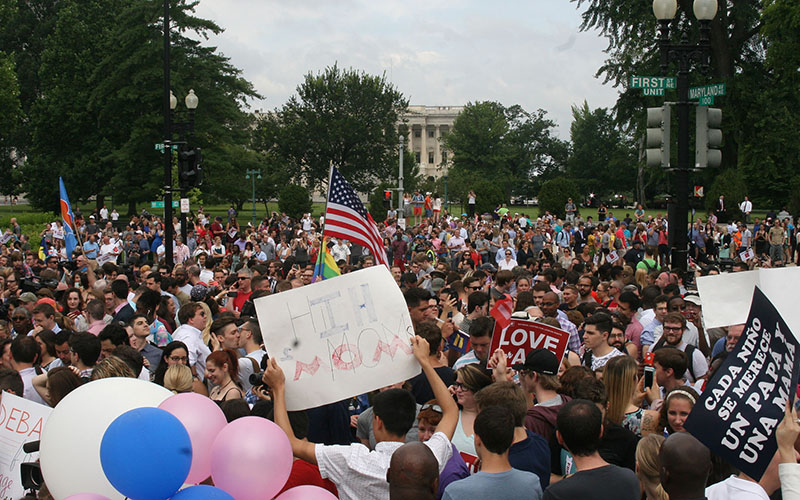 The Supreme Court was asked to decide whether states could prohibit same-sex marriages and whether one state could refuse to recognize such a union from another state. It said no to both. (Photo by Nihal Krishan) 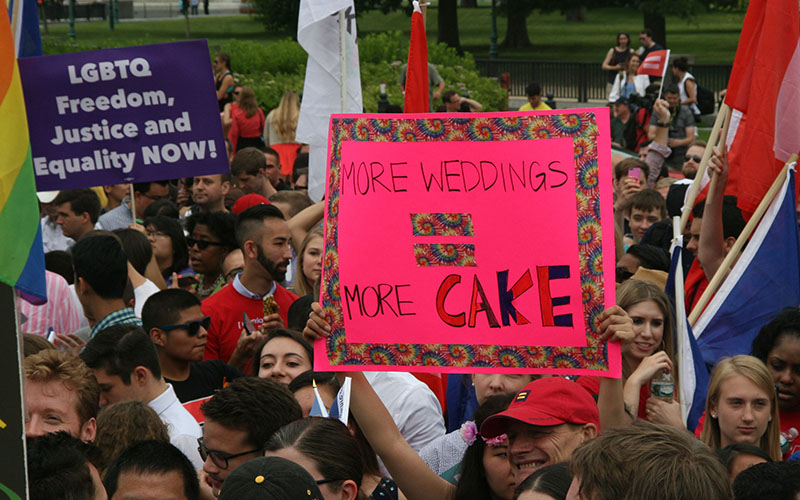 The hundreds who turned out at the Supreme Court Friday were overwhelmingly in support of same-sex marriage, unlike previous, contentious rallies on the issue at the court. (Photo by Nihal Krishan) 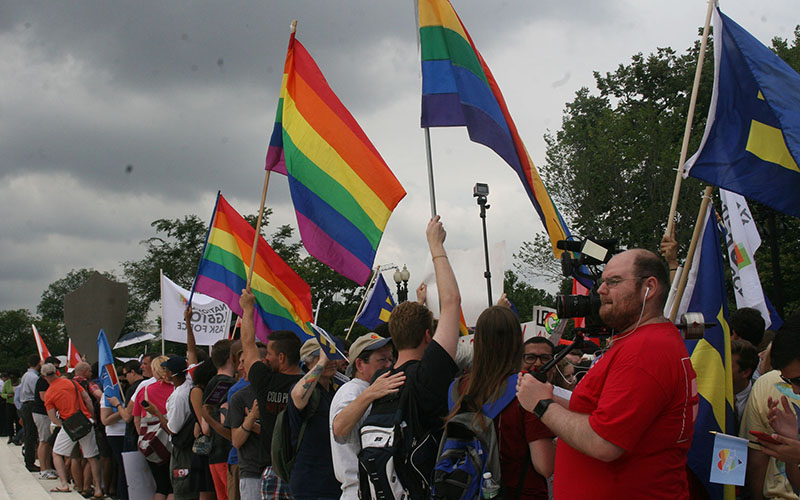 Hundreds rallied outside the Supreme Court on Friday, and numbers started to swell in the late morning after it was learned that the court had ordered states to recognize same-sex marriages. (Photo by Nihal Krishan)

WASHINGTON – A divided Supreme Court said Friday that states cannot deny marriage licenses to same-sex couples, ruling that the Constitution’s protection of the right to marry cannot be denied based on gender.

Advocates in Arizona were sharply split on the court’s historic 5-4 decision, but both sides vowed that Friday’s ruling will not be the end of the fight.

“Big picture, this isn’t the final word on marriage. Abortion laws have changed many times over the past 40 years,” said Aaron Baer, a spokesman at the Center for Arizona Policy, which opposes same-sex marriage.

While Baer said opponents would work to roll back the court’s ruling, gay-rights advocates were promising to take the fight for equality to the next level. Even as they celebrated the ruling, they cautioned that there is much work to be done to bring true equality for lesbian, gay, bisexual and transgender individuals.

“The fight for equality doesn’t end here at all, this isn’t the moment we get complacent,” said Austin Marshall, president of the College Democrats of Arizona.

“Now the fight begins for LGBT protections in the workplace, making sure they are recognized as a protected class themselves,” Marshall said. “So the fight does not end here, it will continue on and we will prevail there as well.”

Gay-rights advocates prevailed Friday with the Supreme Court’s ruling in Obergefell v. Hodges. It consolidated several cases from the Midwest that asked whether states could refuse to marry same-sex couples and whether one state could refuse to recognize such a marriage from another state.

The court answered no to both questions.

The majority opinion by Justice Anthony Kennedy included a lengthy discussion of the history of marriage, and of the fact that treatment of it and of gay-rights generally has changed over time. He said same-sex couples respect the institution of marriage “so deeply that they seek to find its fulfillment for themselves.”

“Their hope is not to be condemned to live in loneliness, excluded from one of civilization’s oldest institutions,” Kennedy wrote. “They ask for equal dignity in the eyes of the law. The Constitution grants them that right.”

Kennedy called the right to marry “a fundamental right inherent in the liberty of the person, and under the due process and equal protection clauses of the 14th Amendment couples of the same-sex may not be deprived of that right and that liberty… No longer may this liberty be denied to them.”

But the four dissenting justices were sharply critical of Kennedy’s reasoning, with each of the four writing separate dissents to make their points.

Chief Justice Roberts said that while Kennedy’s arguments may be appealing, there was no legal justification for the ruling. He said “five lawyers” on the court had taken the place of the legislature.

“Many people will rejoice at this decision, and I begrudge none their celebration. But for those who believe in a government of laws, not of men, the majority’s approach is deeply disheartening,” Roberts wrote.

He said advocates of same-sex marriage had made considerable gains through the democratic process, but “that ends today.”

“Five lawyers have closed the debate and enacted their own vision of marriage as a matter of constitutional law,” Roberts wrote. “Stealing this issue from the people will for many cast a cloud over same-sex marriage, making a dramatic social change that much more difficult to accept.”

The ruling will have little immediate impact in Arizona, which legalized same-sex marriages in October. It was one of 37 states that had done so, many because of lower court rulings that ultimately led to Friday’s decision.

But supporters of same-sex marriage in the state still welcomed Friday’s ruling, saying it will benefit them by expanding their marriage rights to all 50 states.

“No matter where Joaquin and I live, our marriage will be recognized. Wherever we go in this country we’ll be treated as husbands,” said Ruben Gonzales, an Arizona native who was among the crowds outside the Supreme Court Friday.

Hundreds gathered at the court early Friday, anticipating a ruling that some had been waiting decades to achieve.

There was a handful of opponents on the plaza outside the court, but the overwhelming majority were same-sex marriage supporters, decked out in all colors of the rainbow and waving flags with messages of solidarity and equality.

The atmosphere was tense but hopeful, with excitement in the air palpable. The ruling came down minutes after 10 a.m., and as designated runners carried the news from the courtroom to the plaza, the crowd erupted into singing, dancing and shouting their approval.

The celebration continued with chanting, singing and waving banners as the plaintiffs left the court and came out to speak to the banks of microphones and cameras on the sidewalk. People could be seen at every corner of the plaza, taking pictures and selfies to record the historic moment.

For Gonzales and his husband, it was a momentous day.

“Now having the Supreme Court weigh in and say that our marriage is legal and valid and equal to any other marriage across the country, in any state, is huge,” said Gonzales, who works for the Congressional Hispanic Caucus.