Rep. Kyrsten Sinema, D-Phoenix, celebrates with other women in Congress after the lawmakers won their annual charity softball game against reporters by a 1-0 score. (Photo by Jamie Cochran) 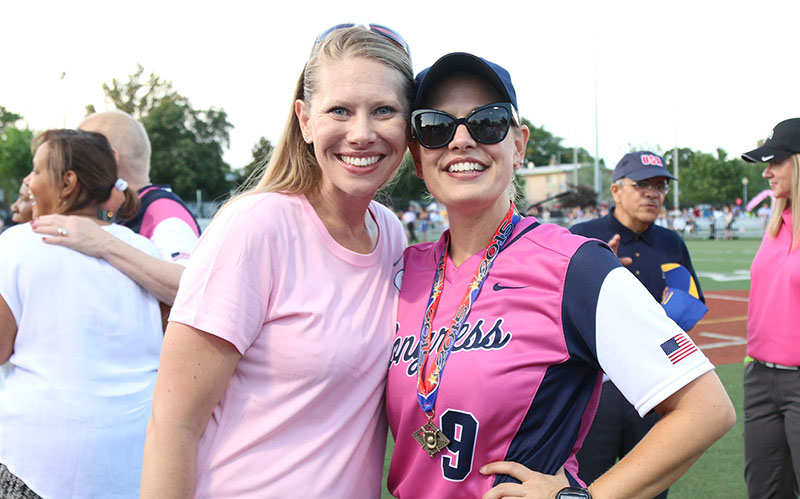 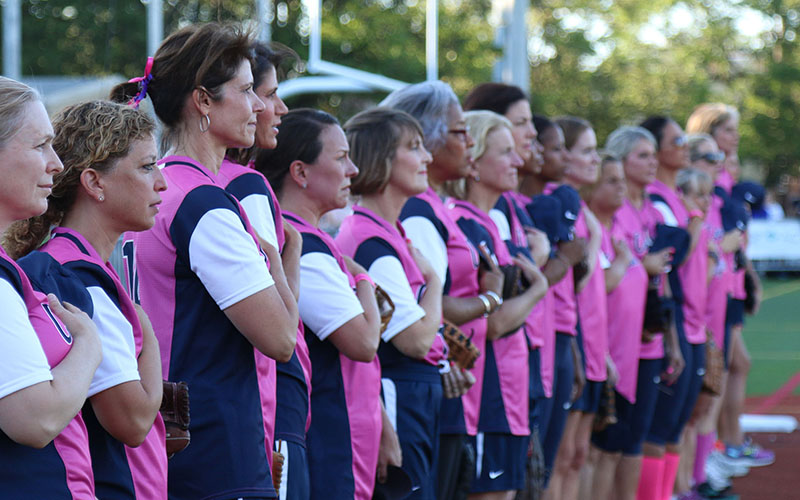 Members of Congress pause for the “Star-Spangled Banner” before squaring off against women reporters of Washington in an annual charity softball game. (Photo by Jamie Cochran) 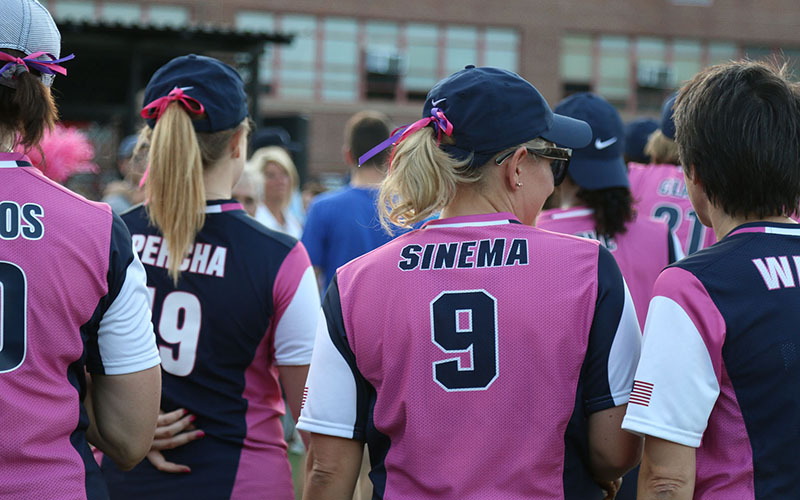 Rep. Kysten Sinema, D-Phoenix, huddles with women in Congress and women journalists before they face off in a charity game to raise money to fight breast cancer. (Photo by Jamie Cochran)

WASHINGTON – Congress is often split into blue camps and red camps, but a bipartisan group came together Wednesday in a pink camp – the congressional softball team raising money to fight breast cancer.

The annual Congressional Woman’s Softball Game lets Democrats and Republicans stop fighting each other for a night and instead fight the Bad News Babes, a team of women journalists covering the Capitol.

There’s little at stake in the charity game but a trophy and some medals and the all-important bragging rights for the next year. But there’s a lot to be gained – game organizers presented the Young Survival Coalition a check for $195,000, a record amount for the seven-year-old game.

But just because the stakes are low doesn’t mean the level of competition is, too. Members went into Wednesday’s game hoping to repeat last year’s win and even the series with the reporters.

“We are really excited to defend our title,” said Rep. Kyrsten Sinema, D-Phoenix, who got into the game briefly as a pinch runner.

Pre-game jokes and laughter turned to determination and the occasional impolitic curse word during an unusually close game.

But trash-talking was mostly mild and when the benches emptied, it was not for a brawl but for impromptu dancing to the between-innings music.

Except for the play-by-play announcers and the TV cameras recording the game, it could have been any rec league game at the Watkins Recreation Center field in Southeast Washington.

Fans consisted of sign-waving family members, staff and co-workers in the stands ringing the field on a beautiful night for a ball game, with the weather dry and temperatures in the 70s.

“I don’t know what took me so long – this is great,” said Sen. Jeff Flake, R-Arizona, who was on hand to watch the game for the first time.

He got to see the tightest game in the series so far.

The game was scoreless through the first four innings. But Rep. Cheri Bustos, D-Illinois, ripped a triple in the bottom of the fifth and was driven home by Rep. Kristi Noem, R-South Dakota, to put the lawmakers up 1-0.

Both sides were held scoreless in the sixth, leaving the Bad News Babes one last shot in the top of the seventh.

“We have to score or the game’s over,” New York Times reporter and first-base coach Carl Hulse said, trying to rally his team.

And they almost did. The New York Times’ Jill Agostino tripped on her way to first base but still managed to reach base safely. With two out, Abby Livingston of the Texas Tribune came to the plate as the go-ahead run.

Livingston, last year’s press MVP, hit a line drive to the outfield, but it was grabbed by Rep. Kathy Castor, D-Florida, to end the game.

Members exchanged high fives and celebratory hugs, as they evened the series with the press at 3-3. Lawmakers played against staffers in the first year.

Castor was named MVP for the lawmakers and a new award, for most-improved player, went to Sinema, who only got in to the game as a pinch runner.

“I did work really hard this year to get better,” said Sinema, who said she was not expecting the award,

Depending on who’s talking, the game has raised between $500,000 and $1 million over the years for the Young Survival Coalition, which is dedicated to “critical issues unique to young women who are diagnosed with breast cancer.”

Rep. Debbie Wasserman Schultz, D-Florida, who helped organize the first game after surviving breast cancer, said it continues to be “a very emotional game for me.”

Sinema, playing in her third game, said it is all about “supporting young women victims to cancer.”

Flake, a veteran of the annual congressional baseball game for charity, said games like these are “just a great way to get out with your colleagues in some other setting…. It was fun to watch.”