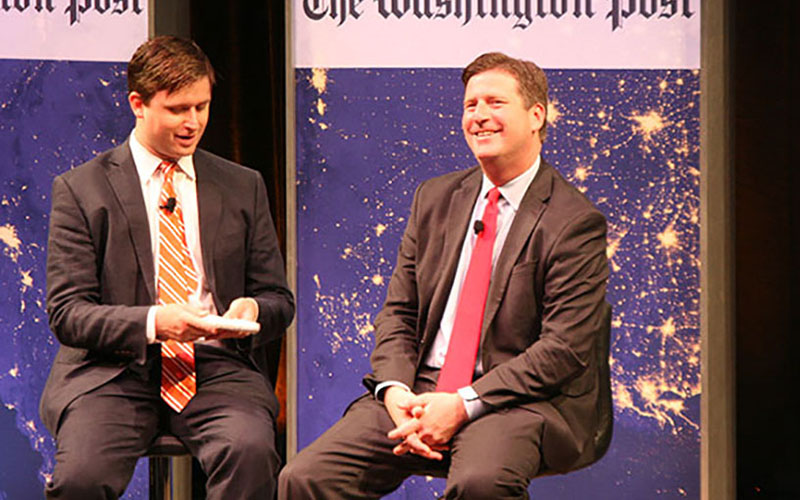 WASHINGTON – Phoenix Mayor Greg Stanton told a Washington panel Tuesday that Arizona is in a fight to make sure other states, particularly California, don’t take water “that rightfully belongs to the people of Arizona.”

The comments were part of a wide-ranging interview at a Washington Post-sponsored panel on how local governments are dealing with energy challenges, during which Stanton touched on everything from water to solar to trash management.

Stanton, repeating a theme he has sounded before in Washington, said local governments have to take the lead on such issues to make up for what he called the “broken relationship” between cities and the federal government.

One area where that local leadership has shown up is in water conservation, he said.

“Phoenix has done an outstanding job with water planning, but that doesn’t mean we’re immune from the challenges of the drought,” Stanton said. “So it is incumbent on us to do smarter water planning and more water-conservation efforts.”

He pointed to the city’s participation in the Colorado River Resiliency Fund, which helps improve water quality through restoration of northern Arizona forests, and initiatives to help farmers cut water use with drip systems and other efforts.

But Stanton said there is only so much the city and state can do on their own.

“What we can’t afford to do is for our friends in Southern California to have access to water that rightfully belongs to the people of Arizona,” he said.

A lawyer with the California Farm Bureau Federation called the mayor’s comments understandable – but misguided.

“I don’t think I would have any objection to someone protecting what they’re legally entitled to,” said Chris Scheuring, the lawyer. “That’s certainly what I’d do on behalf of my clients.

“It’s more of a question of what he means by what we’re entitled to,” Scheuring said, noting that the Colorado River Compact spells out exactly how much water each state in the basin is to receive.

But Tom Buschatzke, director of the Arizona Department of Water Resources, said the state still needs to be “vigilant in protecting our water rights.”

Buschatzke agreed with Stanton that Arizona must continue to ensure that its Colorado River allocation is not hurt by the drought.

“What we have been attempting to do in the Colorado River Basin is to find solutions to make the river more sustainable, specifically for the three lower basin states – Nevada, Arizona and California,” Buschatzke said.

He said the situation has improved since earlier this month, when he testified to Congress that there was a 33 percent chance of a Tier 1 shortage – which would trigger reductions in Colorado River allocations – in 2016.

“There’s almost a 0 percent chance that we will have a shortage in 2016 at this point, and the chances of it happening in 2017 have cut in half because we have had a very wet May,” Buschatzke said Tuesday.

He said that water levels at Lake Mead as of June 15 stood at 37 percent full, according to Bureau of Reclamation models.

Stanton said access to water in Arizona is severely affected by climate change – one more reason that the state must show leadership on issues like sustainability, transportation and water planning, especially in light of the drought.

He said he saw Tuesday’s panel, which looked at “great ideas happening outside the Beltway … as an opportunity to brag about my city.”

Stanton believes Phoenix is in the vanguard on a range of areas, such as transportation, pointing to plans to expand light rail across the Valley. Not only will that improve the economy, he said, it will give residents more options to get from their neighborhoods to their jobs and schools.

“We are not going to get the support that we used to get out of Washington, D.C., and that reality has been changing for … years,” Stanton said. “I embrace that and say Phoenix is going to be a leader.”