Many Westgate businesses could be left in limbo if the Coyotes leave Gila River Arena. (Photo by Tyler Freader) 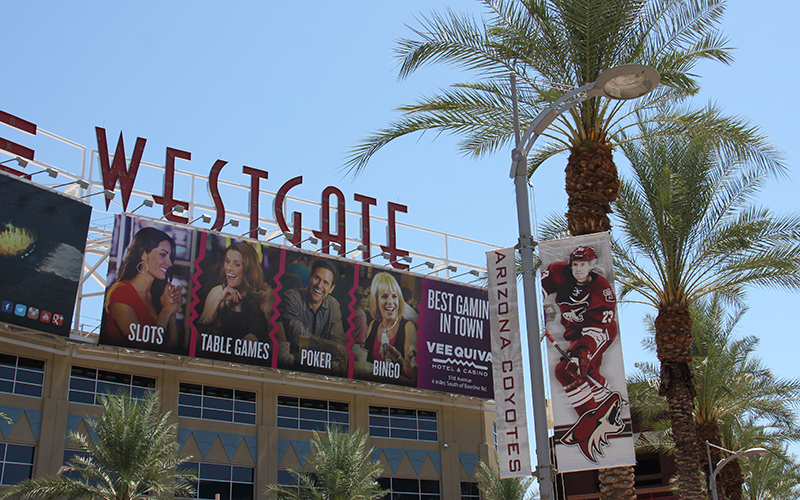 Westgate Entertainment District was envisioned to be a sports and entertainment hub. (Photo by Tyler Freader)

Now, however, that opportunity may have been too good to be true.

After the Glendale City Council voted June 10 to terminate the city’s lease and arena management deal with the Arizona Coyotes, Westgate’s tenants are left concerned about what the effect could be on their bottom line if the NHL franchise leaves Glendale.

Alan Krier, managing partner at OPA Life Greek Café, said the vote to terminate the lease came as a surprise to him.

“My first reaction was I didn’t believe it,” Krier said. “It was one of bewilderment.”

The Glendale location is one of two OPA Life Greek Cafés in the Valley. OPA opened its Westgate restaurant, which sits right across from the AMC movie theater, in December 2014 and quickly began to notice the revenue the Coyotes helped bring in on game nights.

On June 12, a Maricopa Superior Court judge granted the Coyotes a temporary restraining order, allowing the team to stay in Gila River Arena for the time being.

As the legal process continues, Krier says contingency plans haven’t been made for the potential departure of the Coyotes.

“I think the big positive with the hockey being here is that a lot of their games are during the week,” Girn said. “That helps bring clientele in on a Tuesday, or a Wednesday or a Thursday when, generally, malls and restaurants aren’t as busy.

“Anytime you’re driving extra clients, extra customers, extra people to come do something, it’s going to generate revenue not just for me but for everybody.”

Girn said many of the issues that could arise if the Coyotes leave stand unresolved, including what would happen to customers who primarily come to Westgate because of the hockey team.

“Are we going to do different events to try to bring clientele in?” asked Girn. “And what about the people that are going to be upset that the Coyotes are leaving? Are they going to come back to Westgate? A lot of those questions are unanswered at this point.”

Westgate has had financial troubles seemingly since its inception in the early 2000s, when developer Steve Ellman, former owner of the Coyotes, envisioned a giant sports and entertainment district in Glendale.

The first phase of the complex opened in 2006. Westgate has struggled to maintain tenants and in 2011, Ellman lost the property to foreclosure. iStar Financial, a finance and investment company based in New York City, now owns the property, while Vestar Development Co., whose corporate headquarters are in Phoenix, is Westgate’s property management firm.

Mark Stapp, executive director of the master’s of real estate development program at Arizona State University’s W.P. Carey School of Business, said development projects like Westgate come with an understood amount of risk and that the economic downturn was a major factor that contributed to Westgate’s early problems.

“Here’s what happens with these projects: They are ambitious,” Stapp said. “They have many components to them that require close coordination for success to occur.

“Certainly no one had control over the recession. I think it’s hard to look at this project without considering that context.”

Stapp, who worked for Ellman’s real estate and investment group, The Ellman Cos. from 1988 to 1993, says that Ellman’s ability to put Westgate together was worthy of praise.

“You’ve got to consider the fact that University of Phoenix Stadium is certainly a help to any business that’s in Westgate in addition to (Gila River Arena) itself. Those are huge accomplishments,” Stapp said.

Houssein Jabbar, owner of Snackland, a convenience store that opened at Westgate in 2011, called the move by the Glendale City Council unbecoming.

“For the city of Glendale to take action and terminate the lease like that was shocking,” Jabbar said.

“To go about and cancel it like that when it’s only been two or three years into the contract, it doesn’t really look too good.”

The next step in the legal battle between the Coyotes and Glendale is a pretrial conference scheduled June 29.