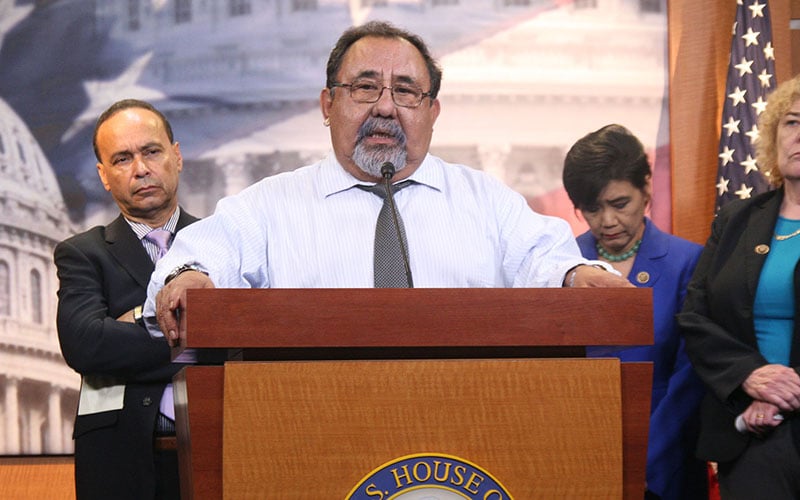 Rep. Raul Grijalva, D-Tucson, backed by other Democrats who think the White House’s plans for a Pacific free-trade agreement will harm U.S. workers and the economy. (Photo by Nihal Krishan)

WASHINGTON – Arizona Republicans sided with President Barack Obama and the state’s Democrats opposed him Thursday, as the House voted to revive stalled negotiations toward a 12-nation free-trade pact with Asian and Pacific Rim countries.

The partisan split by the state’s lawmakers reflected the vote by the full House, which voted mostly on party lines to advance the deal that Republicans say is essential for the economy and Democrats have called an overreach in power by the president.

“I think the trade agreement should be a deliberate process,” said Rep. Raul Grijalva, D-Tucson, who voted against the measure Thursday. “I think members of Congress should have a role, we shouldn’t turn that authority over to the executive branch.”

The measure passed 218-208, with support from 190 Republicans and 28 Democrats, with eight members not voting.

Arizona’s nine-member delegation split, with four Democrats opposing, four Republicans supporting and Rep.Paul Gosar, R-Prescott, not voting because he was back in Arizona, according to his office.

Rep. Martha McSally, R-Tucson, was among those who voted for the measure.

“I voted for TPA (Trade Promotion Authority) because 95 percent of the consumers are outside America,” McSally said. “We have an increasing global economy.

She said the trade agreement would mean “tremendous opportunities for Arizona businesses to be able to benefit from increased exports, and so we’ve got to give the office of the presidency the authority.”

Thursday’s vote was not on the trade pact itself, but on an amendment that merely gave the president approval to continue negotiating on a deal.

It came less than a week after the House rejected another part of the larger effort, Trade Adjustment Assistance. That is a program to retrain U.S. workers who could lose their jobs to foreign competition as a result of a trade deal.

The package of bills has been the subject of heavy lobbying from both sides, with Obama making a personal visit to the Hill last week to try to sway Democrats to support the measure and labor unions, environmental organizations and human rights activists fighting to sway them in the other direction.

“Issues like workers’ protection, environmental protections, the ability for our laws and policies to stand the test of any trade agreement, and currency manipulation – there’s a whole list of reasons I don’t support the agreement,” Grijalva said.

Supporters pointed out repeatedly that the amendment approved Thursday included language requiring that any trade deal come back to Congress for an up-or-down vote and allowing a period for public comment. They urged opponents not to confuse the TPA they were voting on with the TPP – the Trans Pacific Partnership that is the actual trade deal.

The vote put Republicans in the unusual position of urging greater authority for a president they often accuse of executive overreach – and saw Democrats making the points usually argued by the GOP.

“Every president in the last 40 years has had similar authority,” McSally said. “But the authority that we worked on in this TPA legislation actually has more restrictions, more oversight, more transparency than anything any president has had in the past.”