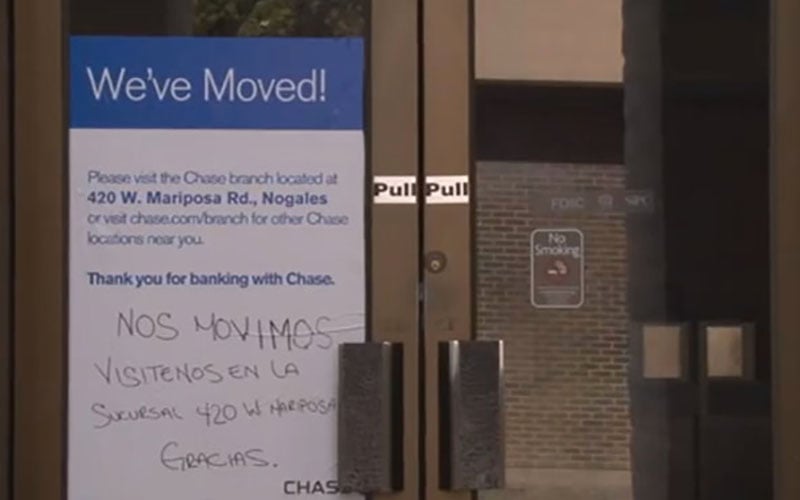 Businesses and elected officials say a rash of bank branch closings in Nogales is making it hard for people to do business there and for companies to get needed capital. (Photo by Samantha Davis)

WASHINGTON – Nogales officials hope that a meeting Tuesday between local banks and regulators from the Federal Deposit Insurance Corp. can help reverse a string of bank closings that have hamstrung businesses along the border.

Banks, worried that they could be liable for regulators’ interpretation of money-laundering rules, have been closing branches along the border in recent months, according to businesses and elected officials.

That leaves customers with fewer banking options and local businesses with less access to capital at a time when the area is “on the verge of booming” in trade with Mexico, in the words of one area business owner.

Jaime Chamberlain, president of J-C Distributing Inc. in Nogales, said a strong banking community is needed and essential to the economy of Arizona.

“Arizona heavily depends on trade with Mexico and we are on the verge of booming in the trade industry, yet we have this lack of banking options and it sets us back,” Chamberlain said.

FDIC officials declined to comment on the meeting. But it has been described by Sen. Jeff Flake, R-Arizona, as an “educational workshop” to address concerns of burdensome regulations and “indiscriminate application” of money-laundering statutes.

Flake and Sen. John McCain, R-Arizona, have been pushing federal officials for several months to address the issue of bank closings along the border.

But banking industry official said it’s not just a problem on the border.

Paul Hickman, CEO of the Arizona Bankers Association, said bank closures are being seen throughout the country, as a response to concerns about money-laundering regulations as well as market conditions in general.

He pointed to increased scrutiny from the Treasury Department’s Financial Crimes Enforcement Network, which implements and administers the Bank Secrecy and Money Laundering Act. Penalties for those found to be involved in money laundering could reach up to $5 million per episode, said business and banking officials.

Flake said in a prepared statement that he was “pleased the FDIC is engaging with Arizona banks and businesses to strive for a balance between appropriately implementing anti-money-laundering laws and letting banks serve the economic needs of the community.”

Sabrina Hallman, CEO of Sierra Seed Co., said she has high hopes for Tuesday’s meeting, which she plans to attend.

“I’m hoping that tomorrow’s meeting brings acknowledgement and understanding from the agency on how we can keep legitimate businesses and grow an economy,” she said Monday.

Tuesday’s workshop follows a March listening session by FDIC officials who promised to come back and address concerns raised in that meeting.

But Chamberlain said that while he hopes Tuesday’s meeting can provide Nogales residents and businesses some answers, he worries that the FDIC will only reiterate what it said in the March meeting.

“The FDIC is a government entity and they are going to continue with the same lines and regulations,” he said.