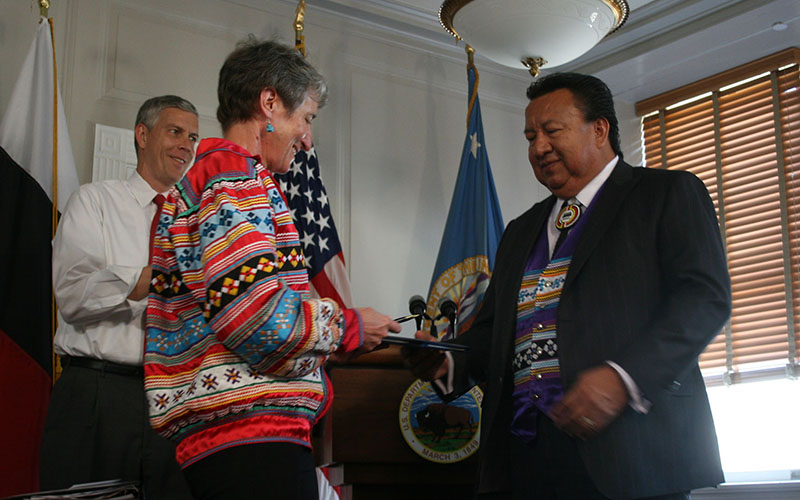 Interior Secretary Sally Jewell presents Miccosukee Chairman Colley Billie with the waiver of No Child Left Behind Act requirements for the Florida tribe’s school, the first such agreement with a tribe in the nation. (Photo by Aubrey Rumore)

It stands to reason, then, that we should have different ways to teach, he said.

“The Native kids need to know where they come from, they need to know their history,” Jack said in response to a new plan to give tribes flexibility under the No Child Left Behind so that Native schools can include more of their history and culture in their curricula.

Jack said he was not sure if the Navajo would take advantage of the plan, but generally liked the idea – a reaction shared by educators and tribal officials across Arizona, even as some worried about setting a different set of standards for Native youth.

But federal officials said something needs to change to help tribal schools succeed.

“You can’t keep doing the same thing and expecting a different result,” said Interior Secretary Sally Jewell, at a signing ceremony earlier this month for the first tribal waiver.

Schools in 43 states currently operate under No Child Left Behind waivers from the federal government, but the one signed by Jewell and Education Secretary Arne Duncan for the Miccosukee Indian School in Florida was the first ever for a tribe.

Federal officials hope it won’t be the last. The Bureau of Indian Affairs is encouraging other tribes to apply for waivers, and will be working with them to develop appropriate standards.

“One of the primary reasons for such a path is for the development of a culturally appropriate curriculum,” said Nedra Darling, a spokeswoman for Kevin Washburn, the assistant secretary of Interior for Indian Affairs.

Jon A. Reyhner, a professor of bilingual multicultural education at Northern Arizona University, said “giving culture-based education a try is a real improvement” over strict adherence to No Child Left Behind.

“It is a mistake to just focus on academics and test scores in my opinion,” Reyhner said in an email. “The NCLB has been a complete and utter failure in closing the achievement gap between non-Asian ethnic minorities and ‘white’ and Asian Americans, as national test scores show.”

But some cautioned against bending standards if that could compromise academic expectations for Native American students.

Tribal schools must meet the standards “so that our students are able to be globally competitive upon graduation,” said Edna Morris, superintendent of the Baboquivari Unified School District in the Tohono O’odham Nation.

Morris said in an email that Tohono O’odham schools have seen improvements in state assessment scores over the past three years, “yet the scores are not high enough to pull us into a performance category.”

“While I agree to the waiver in an effort to meet tribal needs, I also have a firm stand on ensuring that our children attending school on tribal lands will rise to the expectations set forth in our schools,” her email said.

But other educators said current NCLB standards can put tribal students at a disadvantage, by de-emphasizing the relational aspect of teaching – a crucial element when working with Indian students and parents, said Joseph Martin, an education professor at Northern Arizona University.

“Indian educators and educators of Indian students consistently note that implementation strategies should come through the existing local schools, and that decisions affecting schools in the tribal communities should be made locally,” said Martin, who is part of a program that trains Native Americans to be teachers at reservation schools.

The NCLB does not support any of those criteria, he said.

Morris noted that a “waiver would have been nice to have when we began our transformation plan a few years back,” which would have let Tohono O’odham schools and communities work together on reforms.

But she said the Baboquivari school district has teachers in each school that teach the native language and culture, and that high school students in the district must take and pass a Tohono O’odham language and history class to graduate.

“Baboquivari Unified will continue our efforts to make our tipping point happen this coming year,” she said of the district’s test scores. “We are close to success and our plan to develop highly effective teachers through a data-driven instructional philosophy will be the key to driving the learning home for our children.”