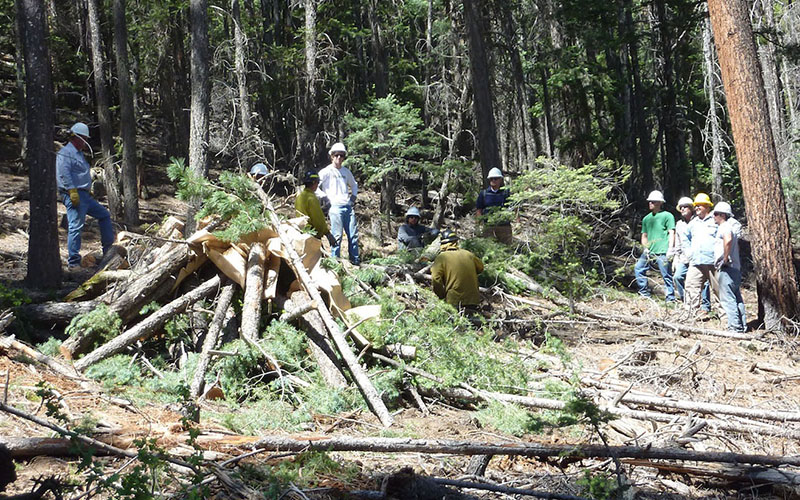 Apache County crews thin the forest near Greer in this 2012 photo, by cutting down small trees and low-hanging limbs. Experts say forest management like this is one key to preventing wildfires. (Photo courtesy Veritas Research Consulting)

The Resilient Federal Forests Acts of 2015 would give the U.S. Forest Service the ability to quickly remove dead trees, would streamline environmental review rules in some instance and would give greater flexibility for funding fire prevention programs, among other changes. The 44-page bill would do that without creating any new federal requirements or red tape, its supporters said.

The Resilient National Forests Act of 2015

According to a bill summary provided by committee staff, the bill aims to reduce wildfires on federal lands by, among other things:

“I think it unties the hands of foresters and the Forest Service and allows them to do their job so we can have healthy and productive forests,” said Rep. Bruce Westerman, R-Arkansas, the lead sponsor of the bill. “I can’t really find any downsides to it.”

But Rep. Raul Grijalva, D-Tucson, did. He tried unsuccessfully to delay implementation of the bill for three years.

“This draws money away from projects and activities that reduce hazardous fuels, promote forest health, and mitigate the impacts of wildfire,” said Grijalva, the ranking Democrat on the committee.

His amendment failed, 15-24, one of two Democratic amendments to be turned down. The bill passed on a party-line vote after about 30 minutes of discussion.

The meeting came just two days after the secretaries of Interior and Agriculture and the chief of the U.S. Forest Service said they expect an above-average year for fires, particularly in Western states suffering under drought. But they said that federal responders will be “ready when fire strikes.”

The bill is aimed at the “disastrous consequences of catastrophic wildfire and other threats to our nation’s federal forests,” according to a bill summary handed out by committee staff.

“It helps promote healthier forests, streamlines the regulatory process and protects folks who live and work in communities around the national forest,” Rep. Ann Kirkpatrick, D-Flagstaff, said in an emailed statement.

Kirkpatrick is one of four co-sponsors on the bill and the only Democrat.

Lawmakers did amend the bill to say that exceptions to environmental review could not be applied to parcels of federal land larger than 5,000 acres.

Arizona currently has two wildfires burning, in what state forestry officials said has been a relatively slow start to the wildfire season this year.

Kirkpatrick said that preventing wildfires in the first place – with programs like the Four Forest Restoration Initiative in Arizona, the largest forest-thinning project in the nation – saves costs in the long run.

“This project is entering an important new phase of forest thinning now that its environmental impact statement has been signed,” Kirkpatrick said of Four Forests. “Arizona is ready to see action on 4FRI, for the sake of our forests and the safety of our communities.”

The bill now heads to the floor, where Westerman said he feels it has a good chance.

“I feel good about it with all the support that we have,” Westerman said. “I think we got a great opportunity to make a big difference in the health of our forests.”