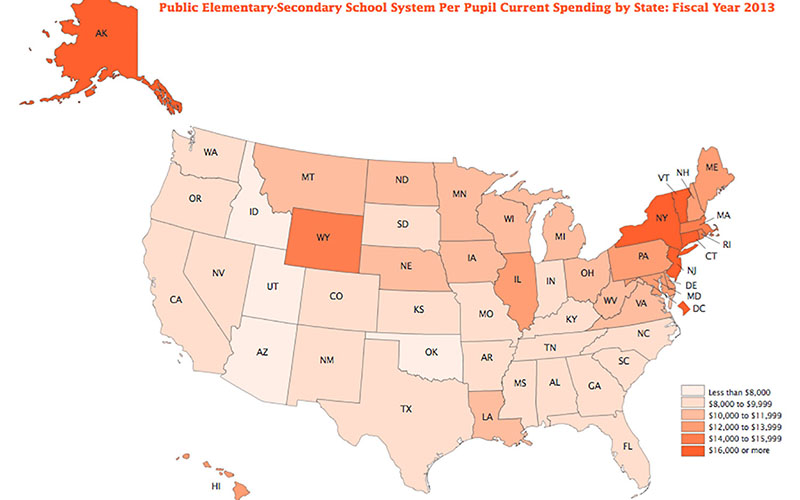 Arizona spending per pupil continues to lag well behind the national average, and it is falling while the U.S. numbers are rising, according to a new Census report. (Photo courtesy U.S. Census Bureau)

WASHINGTON – Arizona continued to be among the lowest states in the nation for per pupil school spending, and its expenditures were falling while the rest of the nation’s were rising, the Census Bureau said.

A bureau report released Tuesday said Arizona spent $7,208 per student in fiscal 2013, well below the national average of $10,700, and 49th out of the 50 states and the District of Columbia.

The report also said the state’s spending rate had fallen for a third straight year, from $7,848 per student in fiscal 2010, a drop of just under 8.2 percent in that period.

Education advocates said they were not surprised at the state’s poor standing. Spending on students in Arizona schools continues to lag far behind national averages, and state spending is now falling as U.S. spending is inching up, according to a Census Bureau report. Click on the chart above for details. (Cronkite News graphic)

“We’ve had low education spending for a long time, so it’s not surprising that we’re at the bottom here,” said Dan Hunting, a senior policy analyst at the Morrison Institute for Public Policy.

He called the latest spending cuts “just a continuation of really a decades-long trend” that has left Arizona well behind other states.

The state ranked poorly in several measures in the report. Arizona was third-lowest in school spending per $1,000 of state residents’ personal income, and it was fourth-highest for the percentage decrease over a five-year period, during which only 11 states saw spending drop.

While Arizona’s spending was lower than most states, the Census Bureau said Arizona was one of the biggest beneficiaries of federal school support, getting 14.6 percent of its school budget from Washington. That was the fifth-highest percentage in the country.

Calls seeking comment from Gov. Doug Ducey and from leaders of the legislative education committees were not immediately returned Wednesday.

Education advocate said the schools are doing the best with what they’ve got.

“For what we are given and how we have to get the money to do our jobs, I think our teachers and administrators are doing a very good job,” said Ralph Quintana, president Arizona Federation of Teachers.

A course in school finance

The top and bottom states for per pupil spending in fiscal 2013, according to the Census Bureau, and the national average.

Chuck Essigs, director of governmental relations for Arizona Association of School Business Officials, agreed that funding is a challenge for Arizona educators.

“It’s certainly not something that we believe provides school districts with adequate resources to be successful,” Essigs said.

“I think our Arizona schools do well with the resources they have, but it’s very difficult to compete with other states when your funding is so minimal,” he said.

Programs like full-day kindergarten, student success funding, and nearly all capital funding are being cut because of budget issues, according to the Arizona School Boards Association.

Hunting thinks it would take billions for the state to get up to the national per pupil spending average, but he believes funding will continue to decrease, at least in the immediate future.

“That’s a pretty big hill to climb,” Hunting said. “It will be a long time before Arizona is at the average per pupil spending,”

It’s not breaking news that funding is a major issue in Arizona, said Charles Tack, a spokesman for the Arizona Department of Education. He said more reports seem to be coming out saying, “Our schools are being asked to do more with less than schools across the country.”

“There is a lot of work to be done,” Tack said. “Funding is one of the issues, it’s certainly not the only issue.”

But funding would go a long way to help local schools focus on the needs of their students, he said.