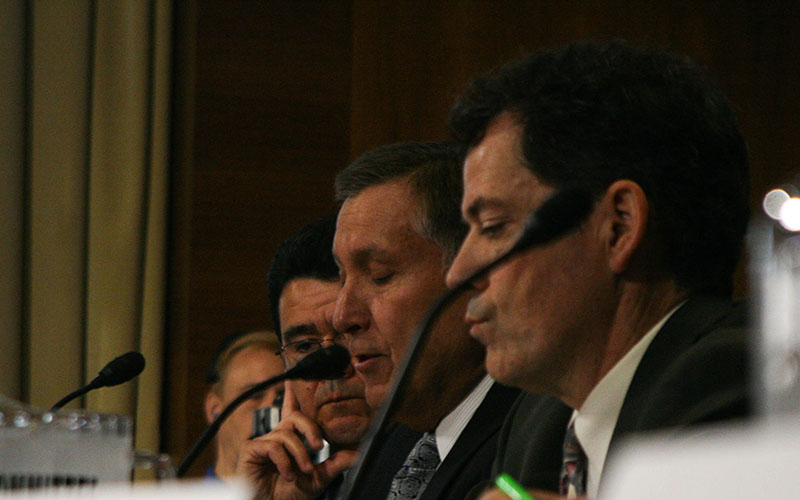 Arizona Department of Water Resources Director Tom Buschatzke, center, at a Senate committee hearing where he outlined the challenges the state faces from the ongoing drought. (Photo by Jamie Cochran) 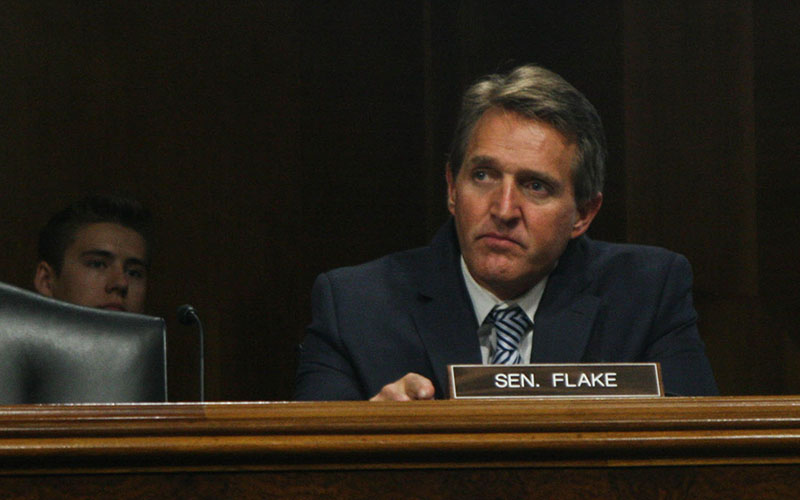 WASHINGTON – Arizona wants more control of its water resources as the ongoing drought in Western states brings the likelihood of further shortages to the region, a state official testified Tuesday.

Tom Buschatzke, the director of the Arizona Department of Water Resources, also told a Senate committee that any solution to the region’s water woes should “benefit the entire Colorado River system rather than any one particular Colorado River water user.”

“Arizona already takes the lion’s share of shortages and it is clear there is an increasing risk of deeper shortages on the river,” Buschatzke said.

He was one of several witnesses testifying Tuesday to the Senate Committee on Energy and Natural Resources on the drought that has gripped the West and the steps that state and local governments are taking to respond.

Sen. Lisa Murkowski, R-Alaska, said the drought is being felt most acutely in California, where mandatory water restrictions were recently enforced. But she said that drought “has been a fact of life for 15 years” for the 40 million people in seven states in the Colorado River Basin.

That affects everything from agriculture to business to residents who rely on water from the river and its lakes.

“The strains are starting to show – most notably at Lake Mead, where lake levels have fallen 130 feet in the last 15 years,” said Murkowski, the committee chairman, in her opening statement.

“At the current rate, in the next few years, users in Arizona and elsewhere could see reductions in their state allocations under the Colorado River Compact,” she said.

In Arizona, Buschatzke said, more than 85 percent of the state currently ranges from “abnormally dry” to “severe drought” conditions.

He said that drought conditions are nothing new to Arizona, a desert state where residents have long known the value of water – and planned for it.

He cited a dozen projects stretching back a century, but focused on the Groundwater Management Act of 1980 that put “aggressive” restrictions on farming, new homebuilding and municipal water systems, among other changes.

That act, passed at a time when the state was drawing groundwater at an unsustainable rate, has reduced Arizona’s dependence on groundwater from 53 percent of overall consumption in 1980 to 40 percent today, he said.

The state later approved the Underground Storage and Recovery program, which has led to the storage of millions of acre-feet of water underground.

“We have stored water under the ground to recover during the drought, and I have the numbers over the last 20 years, for a total of 9 million acre-feet,” Buschatzke said.

But the ongoing drought is challenging those gains, he said.

“Drought on the Colorado River is at the top of our list of challenges,” he said.

If water levels in Lake Mead fall below an elevation 1,075 feet, it requires a declaration by the federal government of a “Tier 1” shortage on the river which, in turn, triggers a reduction in the amount of water states can draw from the river.

For Arizona, a Tier 1 shortage would mean the loss of 320,000 of its annual 2.8 million acre-feet allocation of the river’s water, he said.

“It is important to note that a Tier 1 shortage triggers reductions for Arizona, Nevada, and the Republic of Mexico, but not for California,” Buschatzke testified. He said Arizona “shoulders the brunt of the shortages” in the region.

Deputy Interior Secretary Michael Connor told the committee that his department is working with states on short, medium and long-term solutions to the drought crisis. In addition to water releases and water management, he reeled off hundreds of millions of dollars worth of grants and improvements aimed at easing the drought.

“We have no choice but to adjust and adapt,” Connor said.

Buschatzke said after the meeting that he hopes to see legislation that will address the issue on a regional basis.