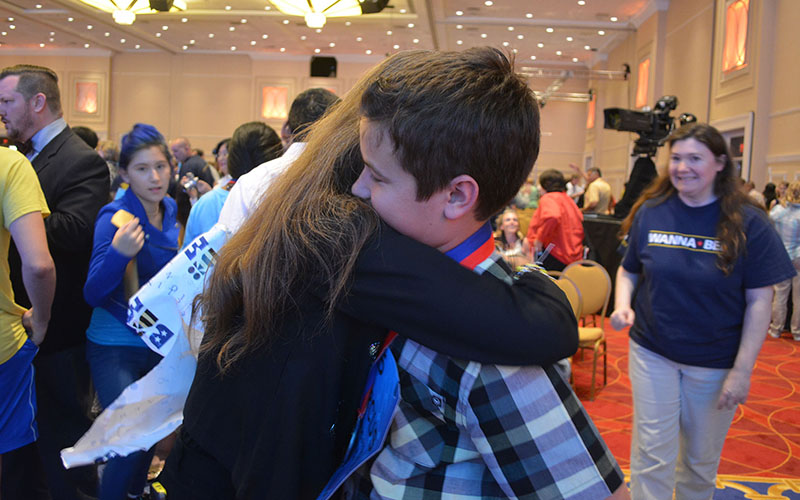 Chandler eighth-grader Marcus Behling gets a hug from mom, Sheryl, during the first day of live competition at the 2015 Scripps National Spelling Bee. (Photo by Aubrey Rumore) 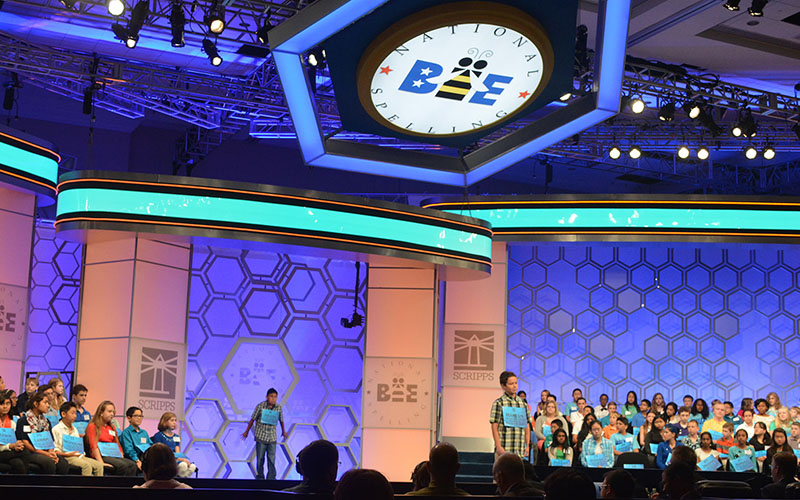 Chandler’s Marcus Behling takes his turn at the microphone while Chinle’s Kelvin Winney waits his turn in background in the second round of the 2015 Scripps National Spelling Bee. (Photo by Aubrey Rumore) 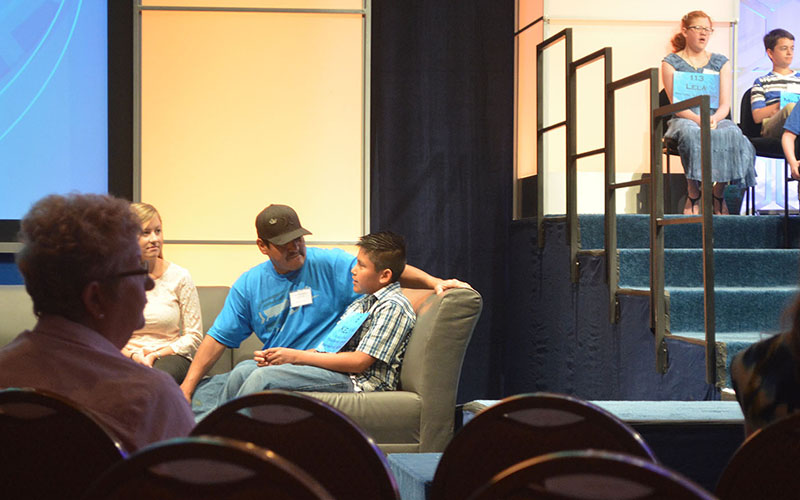 Chinle’s Kelvin Winney, 10, a Canyon de Chelly Elementary fifth-grader, is comforted by dad, Tillford, after being eliminated in round 2 of the 2015 Scripps National Spelling Bee. (Photo by Aubrey Rumore) 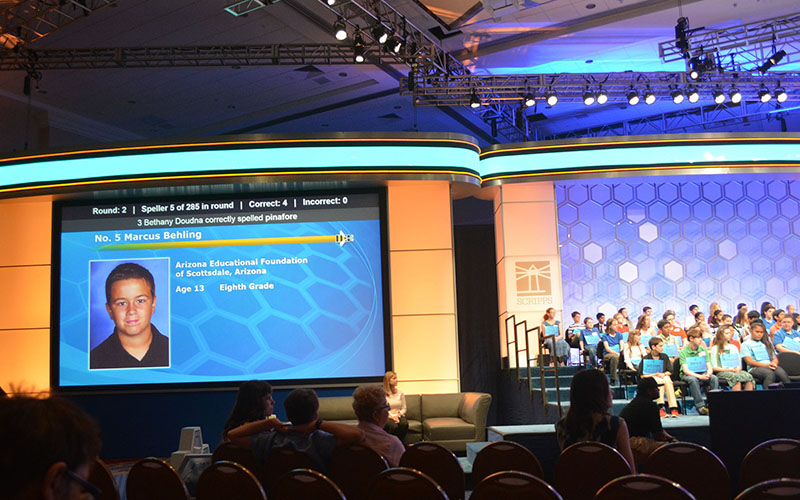 The scene at National Harbor just outside Washington, where 285 students competed over three days in the 2015 Scripps National Spelling Bee. (Photo by Aubrey Rumore)

WASHINGTON – As if the day hadn’t already been stressful enough, Chandler eighth-grader Marcus Behling had to listen while 46 other names were called as semifinalists at the Scripps National Spelling Bee before he heard his name Wednesday.

Marcus, 13, won five competitions back home and had outlasted more than 200 other youths in the first three rounds of the national bee to make it to the semifinal round, one of only 49 students to do so.

“I was pretty sure I had made it, but then when they didn’t call me until the very end I was so nervous,” Marcus said.

The other Arizona student in the bee, Chinle fifth-grader Kelvin Winney, was not so lucky. He was eliminated in the second round when he misspelled “malihini,” a Hawaiian term for a stranger.

Kelvin, 10, a Canyon de Chelly Elementary School student who was the youngest Navajo Nation winner ever to go to the national bee, could not muster much more after his elimination than saying he would be back next year.

His mother, one of several family members who accompanied Kelvin to Washington, was more philosophical.

“We realize it’s not about the final destination, it’s about the journey,” his mother, Nora McKerry, said.

ABCs of the Bee

Kelvin had plenty of company Wednesday. The day started with 285 spellers from all 50 states and several territories and foreign countries before being winnowed down to the 49 semifinalists. They all took a multiple-choice vocabulary test Tuesday before the rounds of on-stage spelling that are the familiar part of the bee.

As Kelvin approached the microphone, just the sixth speller of the day, Jacques Bailly, the bee’s official pronouncer since 2003, greeted him with a, “Hi, Kelvin.” He pronounced “malihini,” then volunteered it was, “As in, whoever that malihini is, she sure has wicked mad hula skills.”

The comment drew laughs from some spellers onstage, but not from Kelvin. His attempt at spelling it, m-a-l-l-a-n-h-i-e, was followed by the ding of the bell indicating he was incorrect. It was the first bell-ding of the day.

Immediately before Kelvin’s turn, Marcus approached the microphone and flashed a smile. He quickly asked for the definition of his word, the part of speech and language of origin before correctly rattling off the letters “r-e-n-e-g-a-d-e.”

His mother, Sheryl Behling, said Marcus copes with all the excitement and nerves of the competition by playing it cool on the outside.

“He really suppresses all the emotions,” she said.

He’s not a newcomer to the bee: Besides facing competition at the state level, Marcus watched his older brother compete in the national bee in 2011.

Sheryl Behling agreed that Marcus has “had a lot of preparation.”

“I talked to a woman whose son got here after he won one spelling bee,” she said.

In the third round Wednesday afternoon – along with 278 other spellers who were still standing – Marcus was again one of the first at the microphone. But this time, the two kids before him both misspelled their words before Bailly gave him his word – isagoge, an introduction to a scholarly work.

Marcus again asked for the definition and an example of the word in a sentence, before spelling it correctly.

“It was nice being one of the first to go because it’s good to get the stress out, but it was so boring,” said Marcus, who extended a hand to students eliminated in the round as they walked past his seat on stage.

After the two elimination rounds, judges added scores from Tuesday’s vocabulary test to determine the semifinalists.

“I just hope I made it,” Marcus said while scores were being tallied.

After about an hour, all the spellers lined up on stage as the names of the semifinalists were called. After 46 names, the announcer called forward speller No. 5, from Chandler, Arizona.

The semifinalists were all given computer tablets – eliciting squeals as they ripped off the wrapping paper – and all the other contestants got vouchers for one. Then it was off to another multiple-choice test Wednesday evening for the semifinalists, who will be back on stage Thursday morning for more rounds of spelling and more rounds of elimination toward the finals, and an ultimate winner.