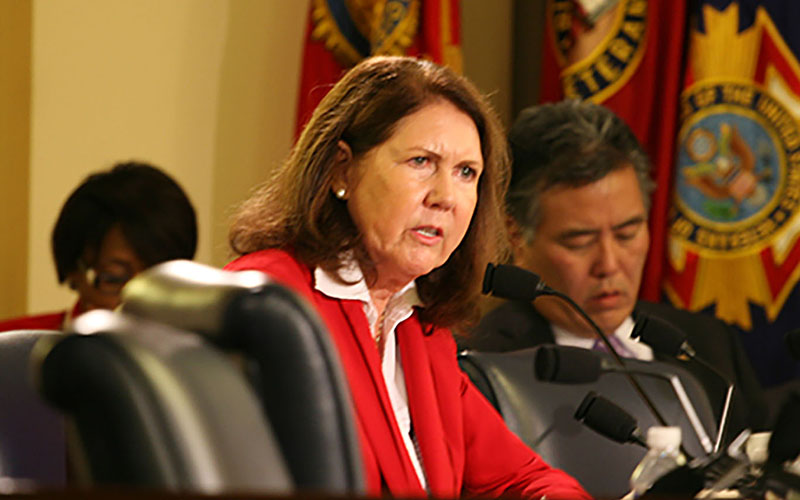 Rep. Ann Kirkpatrick, D-Flagstaff, shown in a file photo from 2014, said she will run for U.S. Senate from Arizona in 2016. (Photo by Camaron Stevenson)

WASHINGTON – Rep. Ann Kirkpatrick, D-Flagstaff, announced Tuesday that she is running for Senate, making her an early entrant in what is expected to be a large field and costly campaign to unseat Sen. John McCain.

The announcement gives Arizona Democrats what one analyst called a “pretty credible candidate” for Senate, but it also presents Republicans with a “prime pickup opportunity” for the 1st District seat that Kirkpatrick leaves behind.

Kirkpatrick becomes only the second candidate to formally announce for the seat – the other being McCain, who said in April that he will run for a sixth term in the Senate. But McCain is expected to face challengers in the Republican primary in what analysts predict will be a “very expensive” campaign.

And Kirkpatrick has her work cut out for her, said Jennifer Duffy, a senior editor for the Cook Political Report who specializes in senatorial and gubernatorial races.

“Kirkpatrick has a lot of work to do in terms of getting known outside her district,” Duffy said. “She has survived tough elections in a tough district and that could help her statewide, but that’s not guaranteed.”

That “tough district” is Arizona’s 1st District, which encompasses almost all of eastern Arizona and represents many of the state’s Native American tribes. The district leans Republican, and was carried by 2012 Republican presidential nominee Mitt Romney.

With no Democratic incumbent, the National Republican Congressional Committee is already looking forward to a GOP victory in the 1st District in 2016.

“No matter how they try to spin it, this is a huge setback for House Democrats,” said Zach Hunter, a spokesman for the NRCC. “The 1st District is a prime pickup opportunity for Republicans in 2016.”

The Democratic Congressional Campaign Committee did not immediately return calls seeking comment Tuesday. But Barbara Lubin, a spokeswoman for the Arizona Democratic Party, said Democrats are not about to cede the district.

“We’re going to fight for it,” said Lubin, adding that both state and national party officials are looking at potential candidates to run for Kirkpatrick’s seat.

Kirkpatrick was not available for comment Tuesday, but in her announcement said election to the Senate would just continue the work she’s done in three terms in the House.

“I’m fighting for Arizona every single day,” Kirkpatrick said in her Tuesday announcement. “And I’d be humbled to represent our state in the United States Senate.”

Kirkpatrick was first elected to the House in 2008 but lost her re-election bid to Rep. Paul Gosar, R-Prescott, in 2010. She ran again in 2012 – after Gosar chose to run in a newly drawn 4th District – defeating Republican former state Sen. Jonathan Paton by a margin of 3.6 percent.

Despite being targeted by national Republicans, Kirkpatrick won re-election in 2014 by an even wider margin, winning 52.6 percent of the vote to former Arizona House Speaker Andy Tobin’s 47.4 percent.

For the 2014 race, Kirkpatrick raised more than $3.4 million – nearly double the national average for House campaigns in that election cycle, according to the Center for Responsive Politics.

She had raised more than $313,000 in this election cycle and had $296,000 in cash on hand as of March 31, according to the most recent campaign filings with the Federal Election Commission. McCain had raised $2.1 million and had $3.7 million in the bank in the same period, according to the FEC.

In Kirkpatrick, McCain will be facing what Duffy calls a “stronger candidate than he’s faced in the past couple of elections.” But Kyle Kondik, managing editor of Sabato’s Crystal Ball at the University of Virginia’s Center for Politics, notes that McCain has the advantage of being the incumbent.

“The good thing for McCain is he shouldn’t have any trouble raising money. He’s certainly a known commodity in Arizona,” Kondik said.

But he also pointed to Kirkpatrick’s win in a district that went for Romney, something he said does not happen very often.

Still, Kondik said, it will be tough for a Democrat to win a statewide race in a mainly conservative state like Arizona. He believes Kirkpatrick’s decision was at least partly driven by a case currently before the Supreme Court.

The court should rule in the next month on Arizona State Legislature v. Arizona Independent Redistricting Commission. Should the court rule in favor of the legislature, the power to draw congressional district boundaries would be taken from the commission and given back to lawmakers.

That could let the legislature redraw Arizona’s 1st District into one Kirkpatrick would “have a hard time winning,” Kondik said.

“Perhaps Kirkpatrick is anticipating a bad decision there and decided to run for Senate,” he said.

But, he added, the announcement “does give Arizona Democrats a pretty credible candidate and a candidate that has won in a district less-Democratic than the nation as a whole.”