PhoenixMart will focus on six industries: home and hotel; electronics and accessories; food and beverage; industrial and automotive; and fashion and variety.(Photo by PhoenixMart) 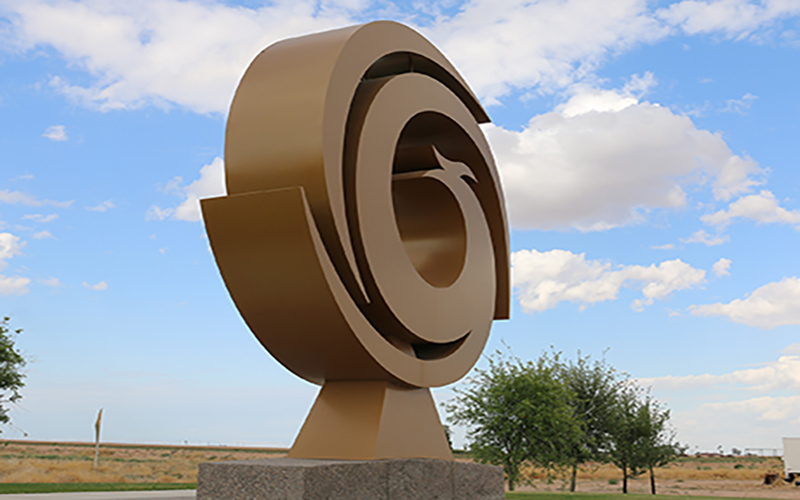 The 585-acre site of the future PhoenixMart remains vacant except for a few development installations near the main entryway of the semi-graded site.(Photo Amy Edelen) 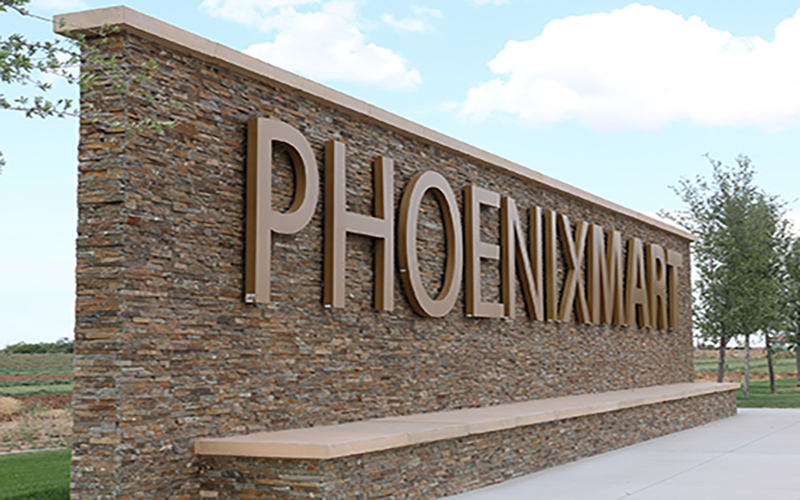 The developers of PhoenixMart in Casa Grande anticipated the 1.5 million square foot project – the largest trade center in North America – would open in late 2012 or early 2013.(Photo by Amy Edelen)

PhoenixMart would attract more than 1,700 vendors, establish nearly 8,000 jobs and provide a combined annual payroll of more than $300 million, officials had said.

They anticipated the 1.5 million square foot project – the largest trade center in North America – would open in late 2012 or early 2013.

Yet the 585-acre site still sits vacant. The only visible signs of progress are three development installations near the main entryway of the semi-graded site. There’s landscaping and a few trees.

Setbacks have plagued the project, leading some residents to gripe about delays and question if the developers will ever finish it.

“They are still working on visas,” he said. “They were way overly optimistic on how long they could get the visas processed. They set expectations that were impossible to make.”

Developers said the $150 million project is progressing, with 95 percent of grading completed on the site. Workers have begun foundation work and once the city approves a building permit application and reviews preliminary plat plans, construction should begin. The company also announced its first tenant last month.

Developers fashioned the idea behind PhoenixMart on similar projects in China and Dubai. The center would bring in vendors of all sizes – including international companies – to sell goods and services directly to consumers.

They planned PhoenixMart as the first phase of NALTEC, which stands for North American Logistics Trade and E-Commerce City. It would eventually include apartments, hotels, a resort, retail and office space and large warehouses and showrooms. Project directors described it essentially as a “city within a city.”

The center will focus on six industries: home and hotel; electronics and accessories; food and beverage; industrial and automotive; and fashion and variety.

“Most American companies have not seen this type of business plan before,” Quinn said. “Our goal is to create efficiency with several outlets and supply chain under one roof.”

Quinn said the focus of PhoenixMart is to grow American business.

Several setbacks — from obtaining building permits and securing visas to dealing with project management changes within AZ Sourcing — have delayed the project.

Some Casa Grande residents have expressed impatience, posting on the company’s Facebook page comments such as, “Less talking, more building, please!” and “Come on! Let’s start the building already!”

Scottsdale-based AZ Sourcing, the parent company of NALTEC, bought the land in 2011. Casa Grande approved the initial design plans in 2012.

The project is funded through the EB-5 federal immigrant investor program created by Congress in 1990. The program allows foreign investors to obtain conditional U.S. residency if they invest $500,000 in a rural, high unemployment area that creates 10 American full-time jobs within a two-year time frame of entering the U.S.

The EB-5 visa program gained popularity after the Great Recession when U.S. investor funding dried up. The U.S. can grant a maximum of 10,000 visas per year.

However, the EB-5 program has faced challenges. Last year, the U.S. reached its visa cap for the first time in 25 years, according to the U.S. State Department.

As a result, officials established a cut-off date applicants from China. There’s now a two-year wait list, which could further complicate job creation for PhoenixMart, because the several Chinese investors have backed the project.

AZ Sourcing declined to comment on the status of investor visas.

The development process has faced challenges, too.

“It’s a big project … a complicated project,” Jackson said. “Adding together all those pieces, I think they were way more optimistic than they should have been when they started and that probably plagued them during project.”

“The fact that there (are) only two centers like PhoenixMart in the world has added complications,” Jackson said. “They are building in an area without infrastructure, so that’s a little bit of a complicated factor as well.”

City officials said the project didn’t receive any tax incentives. However, the project sits inside a community facilities district, so the city will reimburse developers for some forms of infrastructure such as roadways and sewer lines.

For example, workers will install a 21-inch wastewater line for the project. The line would run under I-10 and cost $10 million. The city would pay an estimated $5.2 million while AZ Sourcing would pay $4.8 million, according to city documents.

The city has other costs as well. For example, last month, the city approved a contract for $36,000 to hire an outside contractor, Jensen Hughes, to ensure the project meets building and fire codes.

The future of job creation

Casa Grande’s labor force is more than 21,000, according to the Casa Grande Chamber of Commerce. Casa Grande’s main industries are primarily retail trade, manufacturing and agriculture.

Although the unemployment rate has dropped to 6.7 percent in 2014 from 7.1 percent in the prior year, residents said the area needs jobs.

Casa Grande resident Keith Oliver said although he saw billboards for PhoenixMart, he didn’t know much about the project. However, he said it could have a positive impact for job creation.

“I’ve lived here for 25 years, and there are hardly any jobs out here,” he said.

Jim Dinkle, executive director at Access Arizona, a nonprofit that focuses on economic development, said the NALTEC project would be a game changer for Pinal County if it’s built.

“It would have a huge multiplier effect on the local and regional economy,” he said. “It would be an economic driver and to service such a facility, you would have hotels, restaurants and things that don’t currently exist.”

PhoenixMart could potentially raise property values in the area as well, with real-estate agents anticipating the growth in employment will increase demand for housing.

Jackson said he’s optimistic about the PhoenixMart project, and the future job prospects in Casa Grande.

“Most of the people I’ve talked to are excited for it to come, once they go vertical with building, excitement will just be greater and greater,” he said. “I’m optimistic. There were times I wasn’t optimistic, but seeing pieces fall into place finally, I know it’s going to happen.”

PhoenixMart is now slated for completion by mid-2016.