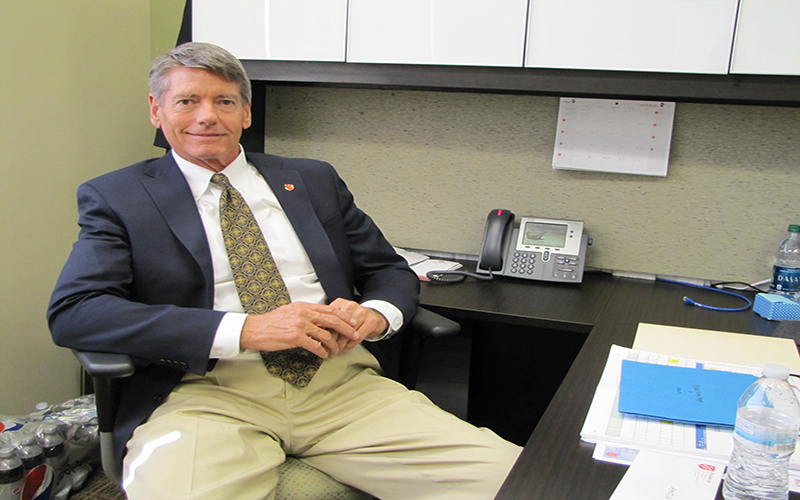 Jeff Taylor, a lobbyist for the Salvation Army, says expanding the Prisoner Transition Program would reduce recidivism.(Photo by Cronkite News)

“It’s not easy getting out of prison, especially for as long as I was in there,” she said.

Lacy, who was released in January, completed the Arizona Department of Corrections Prisoner Transition Program, which allowed her to be released 90 days early in exchange for finishing programs designed to help prisoners assimilate into society. She said the program helped her secure a job.

“I learned that I have to forgive myself and really let go of the shame and the guilt if I want to be successful,” Lacy said.

She said she was lucky to participate in the program because most inmates are never given that chance.

“I’m just really thankful for the program,” Lacy said. “I think that it was a great opportunity.”

Prison rights advocates contend that the Department of Corrections isn’t fully utilizing the program, which currently has no cap on how many inmates can participate. Out of the 19,213 inmates released from state prisons in fiscal year 2014, 943 completed the program. From fiscal 2010 to 2014, no more than 6.2 percent of the total released inmates completed it.

The advocates say these numbers represent a lost opportunity to reduce recidivism, as inmates who take part in the program are about half as likely to commit another felony, according to a Department of Corrections study. The report cautioned against making conclusions based on its results because of inherent differences between those who participate in the program and the general inmate population.

Jeff Taylor, a lobbyist who represents the Salvation Army and has advocated for the expansion of the program, said what he considers a small number of inmates cleared for it translates into a huge demand for the Salvation Army’s services, such as drug treatment and homeless shelters.

“We’re just overwhelmed,” he said. “We have waiting lists for all of our services that would serve those getting out of prison.”

According to background provided to state lawmakers this year, participating inmates must, among other requirements: not have been convicted of a sexual offense, arson, violent crime, domestic violence or driving under the influence; be classified as low risk; be current on restitution; maintain “civil behavior” while incarcerated; and demonstrate an ability to benefit from the program.
Andrew Wilder, Department of Corrections spokesman, said information regarding eligibility is readily available to inmates.

“All inmates are given access to the rules, and that information is made clear,” he said. “There are a lot of rules to follow when you got to prison … but inmates are educated on all of that.”

While he declined to explain how the department determines whether an inmate is considered low-risk, Wilder said he’s confident in the department’s policies on prisoner eligibility.

“When you start with the initial pool of inmates who might qualify you have to go through a series of filters,” he said. “All those who are eligible who do meet the statutory requirements do go through the program.”

The program’s eligibility requirements were loosened in February when the department changed its policy to allow more inmates with major disciplinary infractions to participate, a change Wilder said will bring an estimated 300 more into the program.

“Part of the trouble here is there is very little outside scrutiny or assessment of the Department of Corrections,” she said.

According to the Executive Budget for the 2014 and 2015 fiscal years, $2.8 million was moved in 2012 from the fund to the help the Department of Corrections pay employees after the elimination of furlough days, which were in place the year before.

A bill introduced this year by Sen. Steve Pierce, R-Prescott, would have increased funding and access to the program, but it died after getting out two committees with unanimous votes.

Isaacs said she believes that this renewed attention to the program will ultimately benefit inmates and the public.

“This legislation is a really excellent model to look toward in the future,” she said. “We know that drug treatment works, we know that this helps people.”

Participation in the Transition Program | Create infographics
Share this story: