Hundreds of protesters – including at least three from Arizona – turned out to make their opinions heard as the Supreme Court considered whether states can ban same-sex marriages. (Photo by Liliana Salgado) 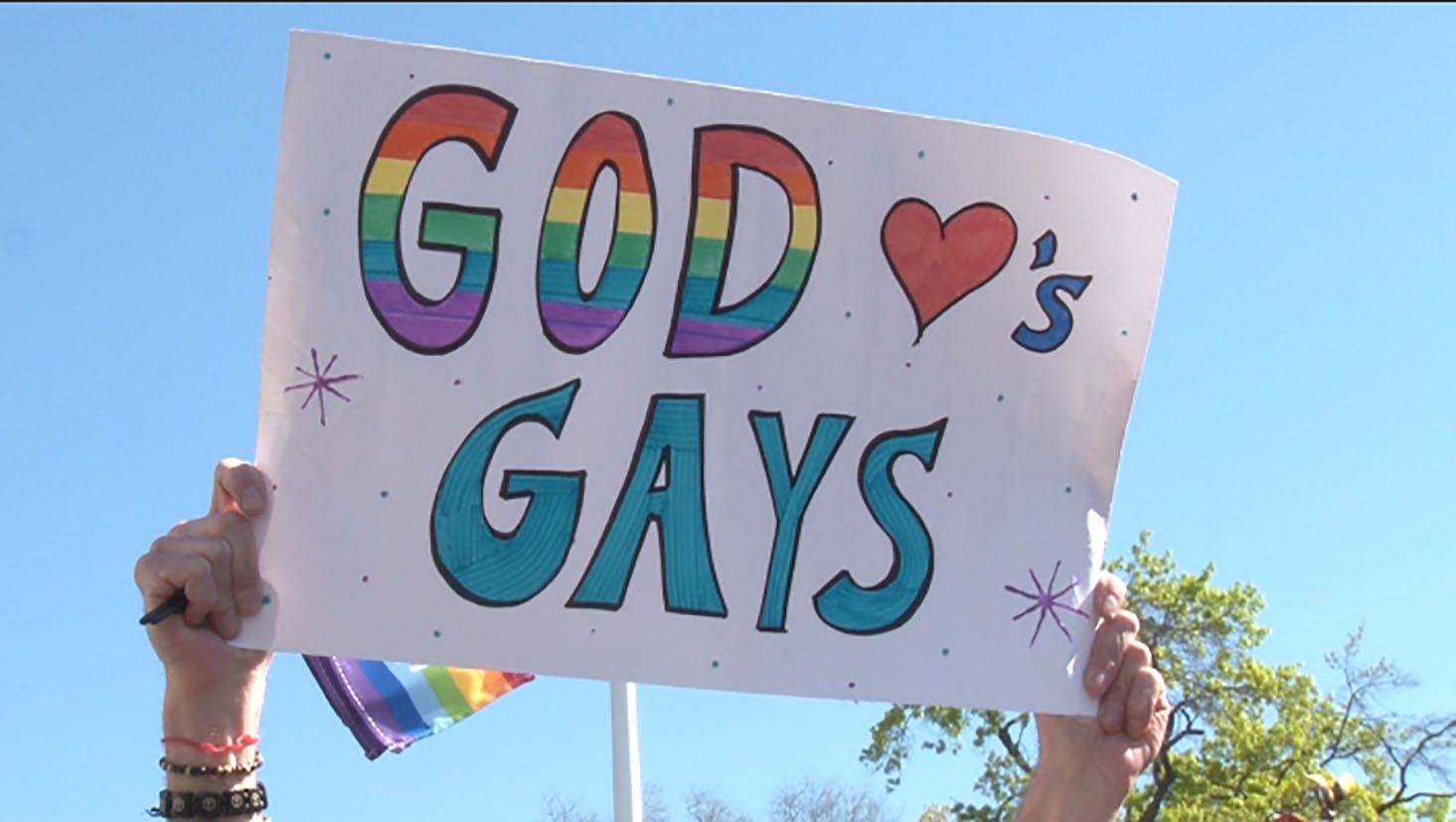 Some tempers flared, but most of the protest outside the Supreme Court was peaceful, with many supporters of same-sex marriage adopting a religious arguments for their case. (Photo by Liliana Salgado) 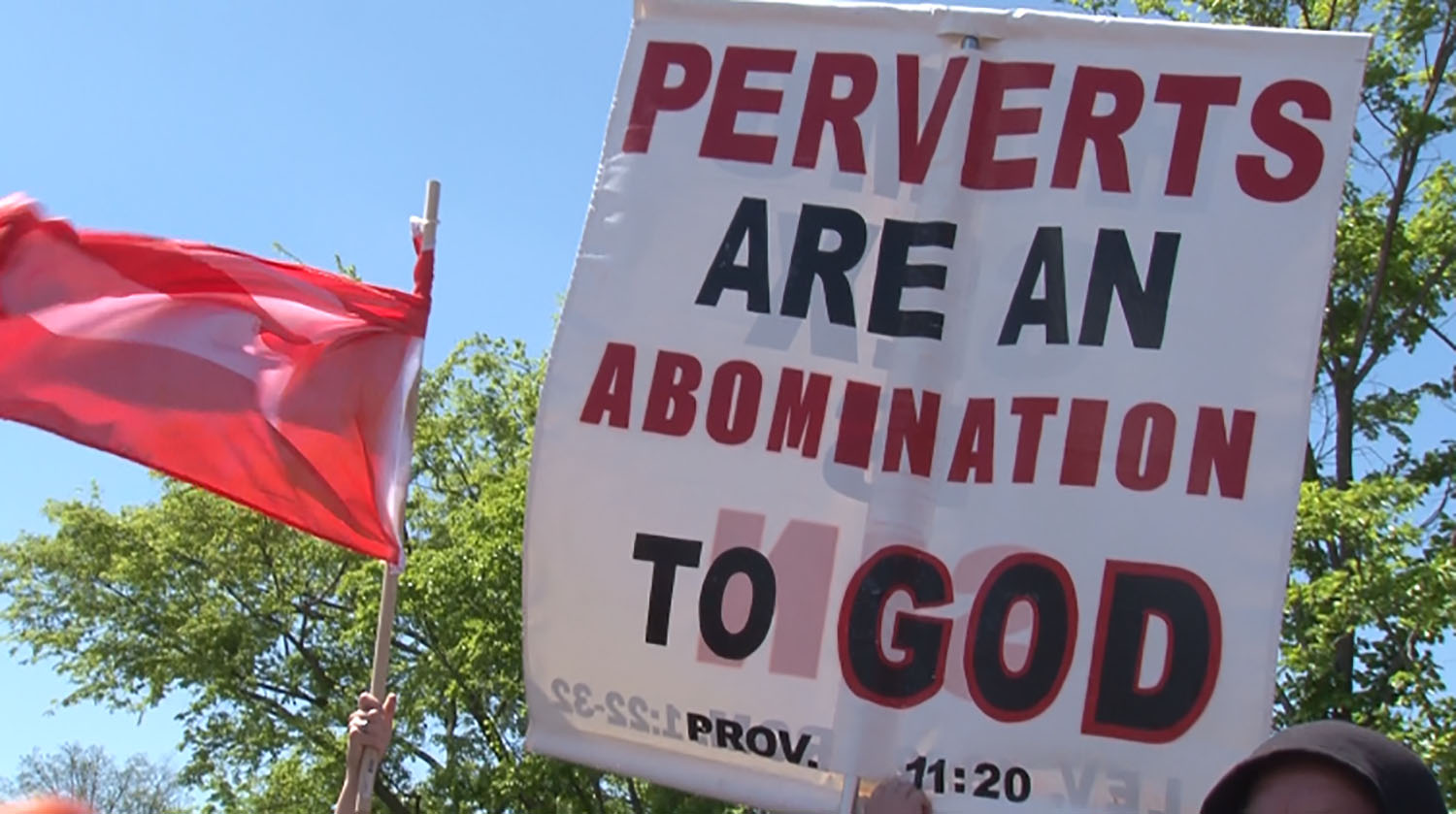 Opponents of same-sex marriage also turned to religion to make their point. Though greatly outnumbered, they made their presence known. (Photo by Liliana Salgado) 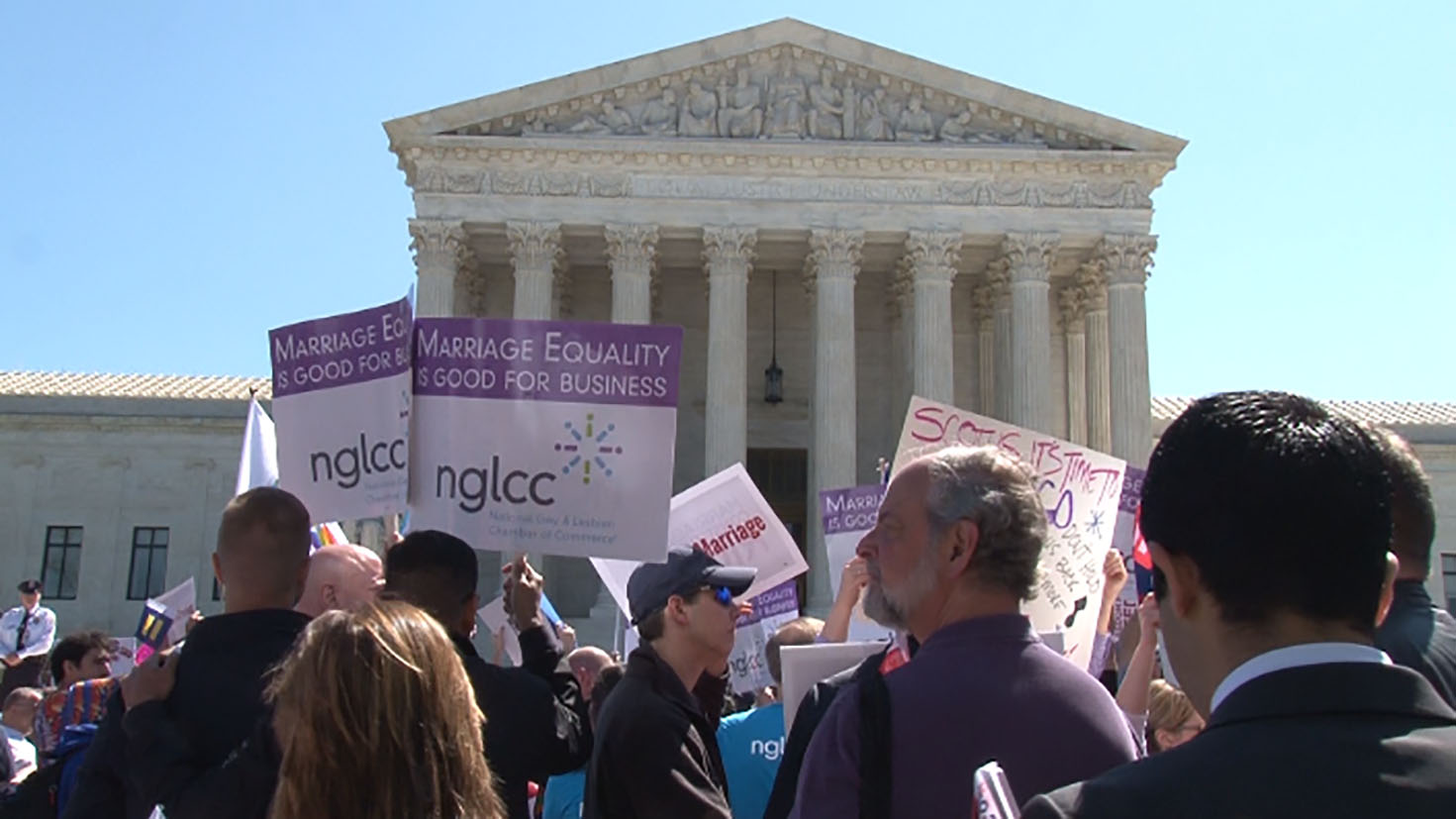 Protesters rally outside the Supreme Court as it revisits the issue of same-sex marriage. (Photo by Liliana Salgado) 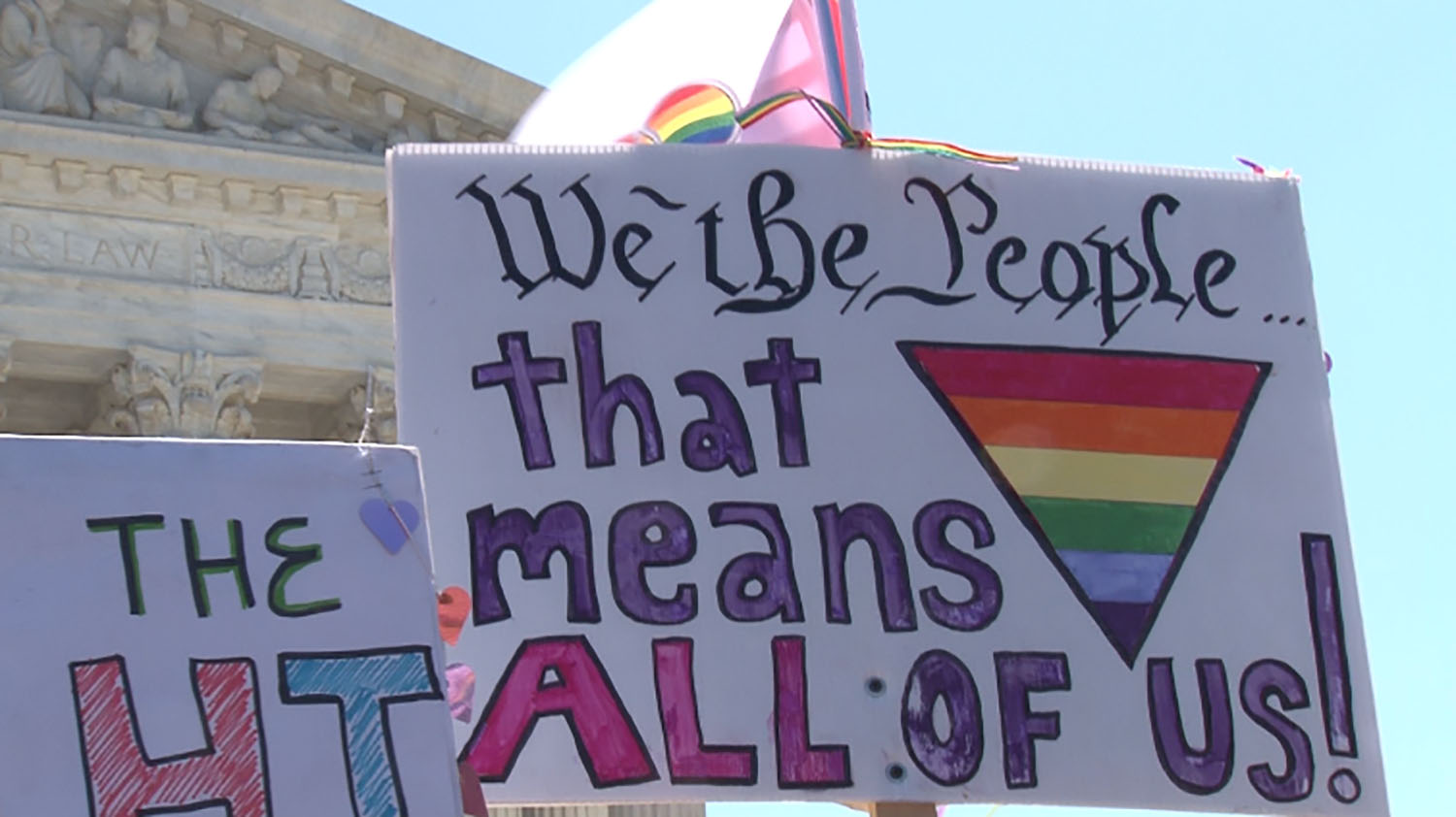 Protestors on both sides of the issue turned out, but supporters of same-sex marriage heavily outnumbered opponents. (Photo by Liliana Salgado) 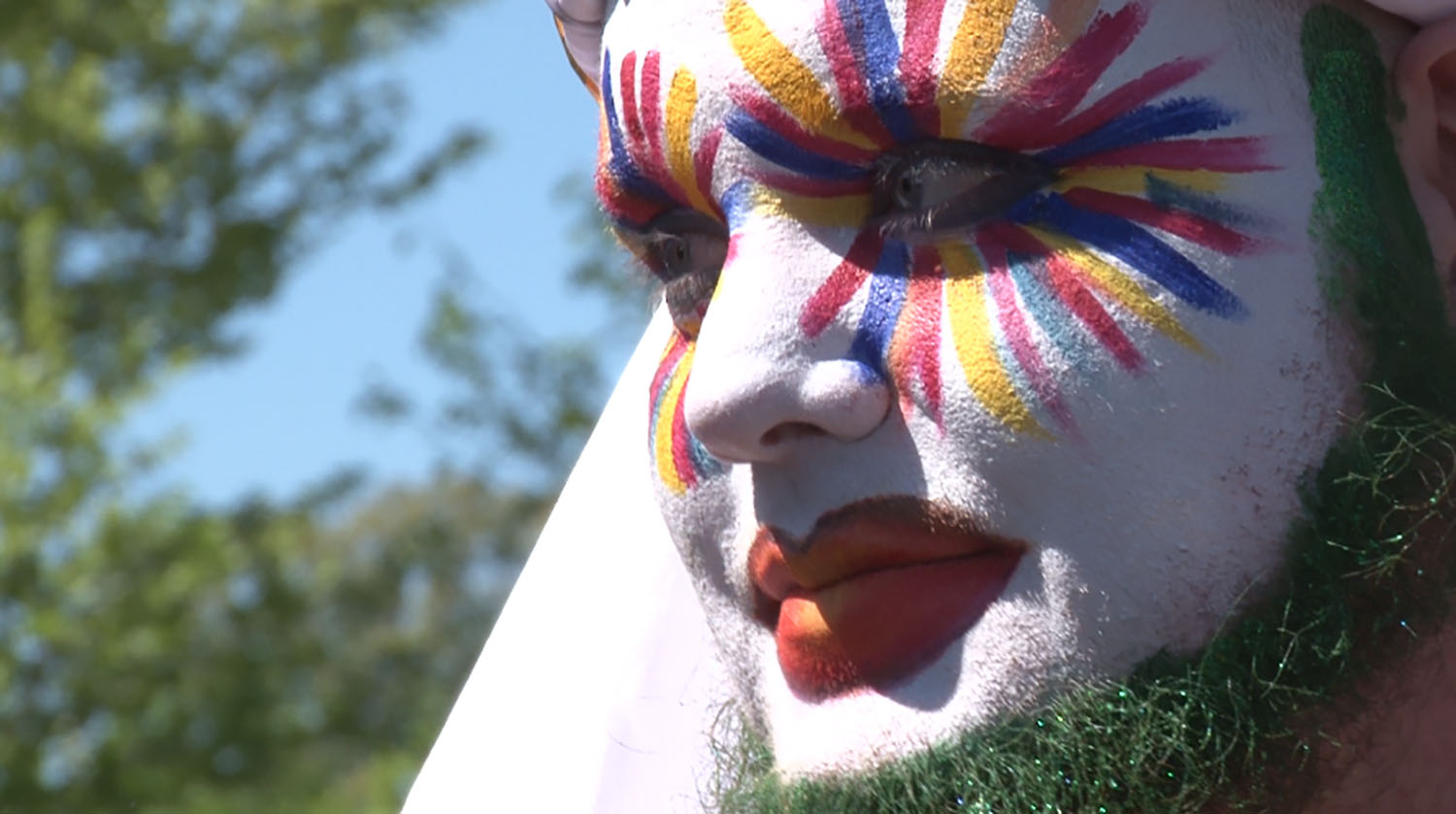 The colorful protest included singing, praying and sign-waving by middle schoolers, people in costume and makeup. (Photo by Liliana Salgado)

The justices this time were considering two questions: Whether state bans on same-sex marriage are constitutional and whether states that do not allow the marriages must recognize those performed in other states.

The issue drew hundreds of protesters who rallied outside the court, while inside the court a man was removed about halfway through the 2.5-hour hearing for screaming, “If you support gay marriage, you’ll burn in hell. It’s an abomination of God.”

The court appeared to struggle with the question, with several justices asking whether it is the court’s role to change the definition of marriage.

“This definition has been with us for millennia, and it’s very difficult for the court to say, ‘Oh, well, we know better,'” said Justice Anthony Kennedy, the expected swing vote on the court.

But Kennedy later expressed concerns about excluding gay and lesbian couples from marriage, adding that it confers “dignity” on them.

The court in 2013 overturned the federal Defense of Marriage Act, which said marriage had to be between a man and a woman. That sparked a string lower court rulings overturning state bans on same-sex marriage, including an October ruling by the 9th U.S. Circuit Court of Appeals led to rejection of the ban in Arizona and other states.

Since the October ruling, advocates estimate that 600 couples in Arizona married and many more had marriages that were performed in other states recognized by Arizona.

Hundreds of Arizona marriages hang in the balance, as court revisits question of same-sex unions

Thirty-six states now recognize same-sex marriages. But four states that do not – Michigan, Ohio, Kentucky and Tennessee – were before the court Tuesday arguing that their voters should be allowed to decide the issue.

Justices picked up that argument.

“If you prevail here, there will be no more debate,” Chief Justice John Roberts said to Mary Bonauto, an attorney for one of the groups pushing for same-sex marriage. “Closing of debate can close minds, and it will have a consequence on how this new institution is accepted.

“People feel very differently about something if they have a chance to vote on it than if it’s imposed on them by the courts,” Roberts said.

John Bursch, a special assistant attorney general for Michigan, argued that it is a states’ rights issue.

“This case isn’t about how to define marriage. It’s about who gets to decide that question,” Bursch said. “Is it the people acting through the democratic process, or is it the federal courts?”

But Justice Stephen Breyer said the issue must extend beyond states’ rights. He questioned whether a certain group’s religious beliefs should be allowed to affect all same-sex couples.

“Certain religious groups do think it’s a sin, and I believe they sincerely think it. There’s no question about their sincerity, but is a purely religious reason on the part of some people sufficient?” Breyer asked.

Much of the debate on both questions of same-sex marriage centered on how it would affect children in same-sex and opposite-sex couples.

But his argument that allowing same-sex marriage would lead to fewer opposite-sex couples getting married, in turn leading to more children growing up without parents, didn’t hold water with many of the justices.

“(In) how many married couples do fathers with the benefits or the requirements of marriage walk away from their children?” Sotomayor asked. “How does withholding marriage from one group, same-sex couples, increase the value to the other group?”

Even Kennedy expressed doubt over the idea that excluding same-sex couples from marriage would have a better influence on children.

“You had some premise that only opposite-sex couples can have a bonding with the child. That was very interesting, but it’s just a wrong premise,” Kennedy said.

The justices were less divided on the second question of whether states banning same-sex marriage must recognize marriage licenses from states that allow it.

Tennessee Associate Solicitor General Joseph Whalen argued that requiring states to recognize same-sex marriage licenses from other states would allow “each state … to essentially legislate for every other state.”

But even the typically more conservative judges wavered on this issue.

“What about (the Constitution’s) Article IV?” Justice Antonin Scalia asked. “‘Full faith and credit shall be given in each state to the public acts, records, and judicial proceedings of every other state.’ Now, why doesn’t that apply? Public acts? It would include the act of marrying people, I assume.”

Justices pointed out that the first and the second question would be difficult to untangle from one another.

“I do,” Whalen responded.

The court is expected to rule on the cases before it recesses in July.