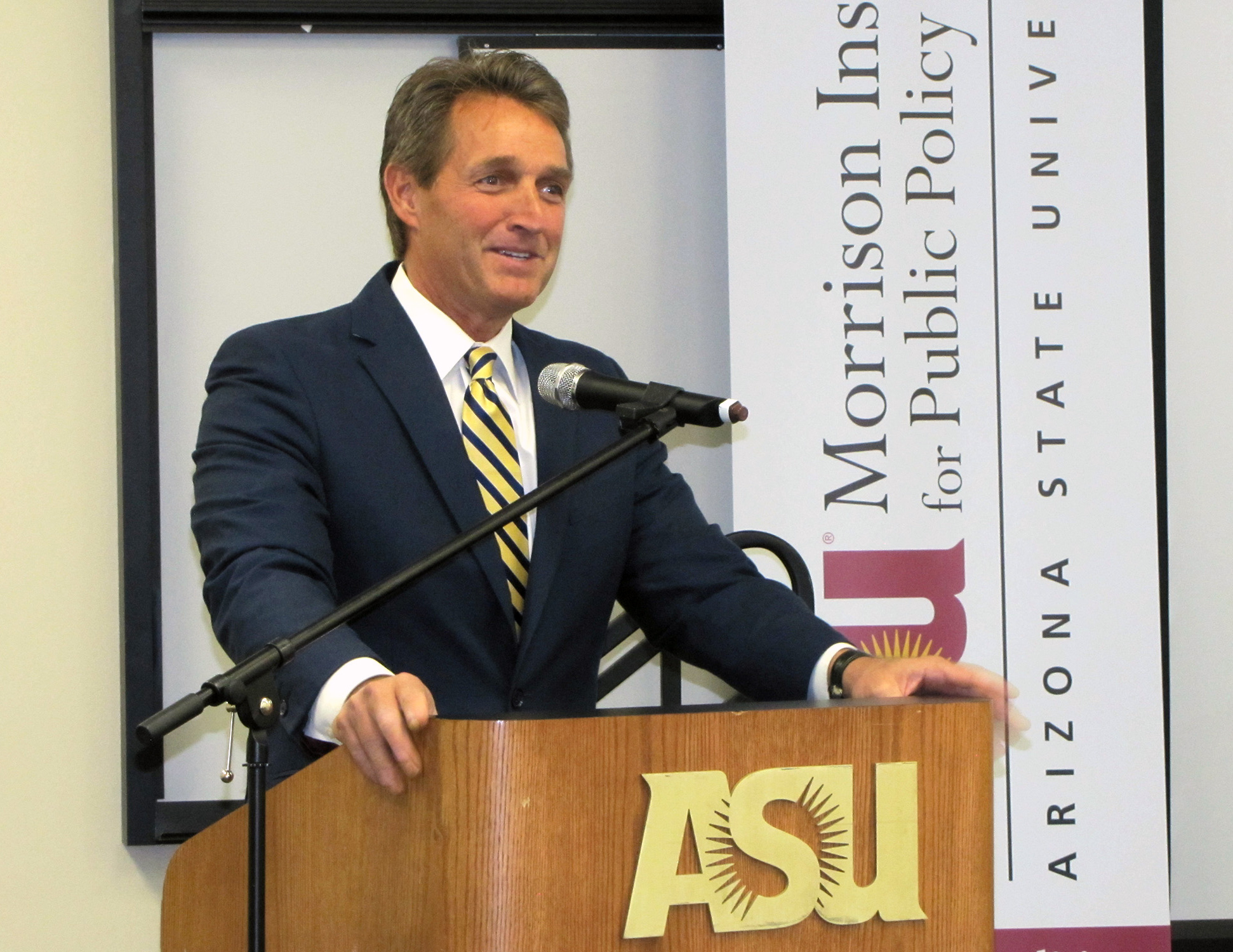 “People assume that you turn on the tap, water comes out and everything’s fine,” said Flake, who convened a community water policy forum in Phoenix. “It’s not that easy. It takes a lot of planning and continual planning and new planning for these droughts that come along.”

The forum, hosted by the Kyl Center for Water Policy at Arizona State University’s Morrison Institute for Public Policy, featured presentations from a panel of water experts about the effective storage and maintenance of Arizona’s surface water and reservoirs.

Although steps have been taken to protect Arizona’s future water supply, there is still an urgent need to do more, Flake said.

“We chose to be ready in the 1980s with the Groundwater Management Code, ensuring cities and towns and any developments basically only happen if there’s a 100-year water supply,” he said. “California didn’t do that, and now they’re feeling the effects. Moving forward, still we have diminished flows in the Colorado (River); we’re going to have to deal with that. We need to make sure every drop of rain that falls in Arizona is utilized.”

Flake planned to convene another community forum Friday in Tucson, focusing on the Colorado River.

Panelists at Tuesday’s event touched on the relationship between viable water storage and forest fires, which create loose soil and ash that run into reservoirs and contaminate the water.

Bruce Hallin, director of water rights and contracts for the Salt River Project, said one of the keys to maintaining Arizona’s stored water is pruning overly thick forests to reduce the chance of wildfires.

“I think we all know that Arizona’s reservoirs are critical when it comes to water supply and drought management,” he said. “But something I think we’ve overlooked over the last 30 years is watershed health, and forest health is a key component … We have these forests that are overgrown, which has essentially resulted in major catastrophic wildfires.”

Within SRP’s watershed area, which includes Prescott, Payson and the Roosevelt Dam, Hallin said about 227,000 acres were burned by wildfires in the 1990s, while about 2 million acres were torched in the 2000s.

Managing Arizona’s water by thinning forests is not only essential for the environment but also for maintaining Arizona’s economy, the experts said.

“Water is the basis or the foundation on which you develop an economy,” Hallin said. “Without a reliable water supply here in the Valley, you really have no economy. That’s foundational, and that’s why you see so many metro areas and where they grew up.”

Keith Devore, fiscal analyst in the city of Mesa’s Water Resources Department who attended the event, said although the panel’s discussion conveyed the problems facing Arizona’s water supply, it was also encouraging.

“There’s a lot of good people doing a lot of good for water resources in the state of Arizona, but it’s still an uphill climb,” he said. “We’re going to need a lot of participation and a lot of people coming together to really figure out some of the challenges we have.”

Read more on the state of water in Arizona: