This area of the Coconino National Forest burned in 1996. An environmental impact statement that clears the way for a plan to thin nearly 600,000 acres in the Coconino and Kaibab national forests, a move that officials say will help prevent catastrophic wildfires. (Photo by Grant Marin) 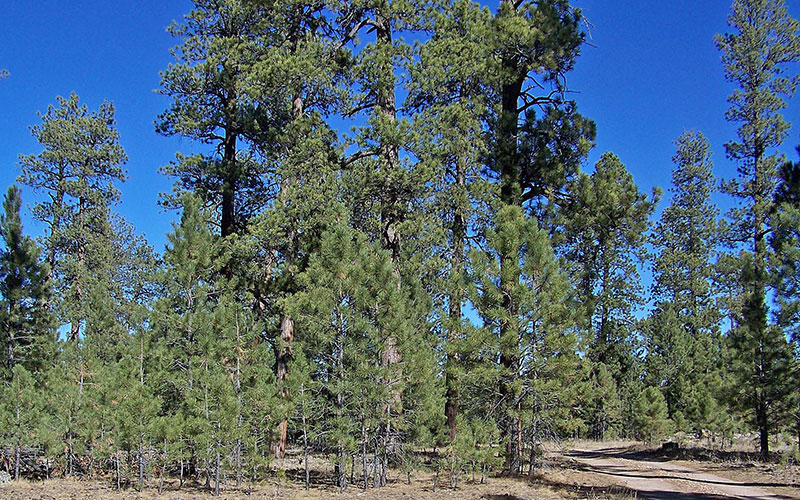 A plan to thin nearly 600,000 acres of the Coconino and Kaibab national forests would remove overgrowth of smaller trees that can fuel highly destructive crown fires. (Photo courtesy of U.S . Forest Service)

“This is huge,” said Kirkpatrick, a Democrat whose district includes areas of the Kaibab and Coconino national forests to be thinned. “We hope to restore the forests so that they can withstand these horrific wildfires.”

The project, which was initiated in 2010, will use prescribed burns and mechanical thinning to reverse overgrowth stemming in part from suppressing fires that once had thinned forests naturally.

Crown fires that burn through the tops of dense forests and char tens or hundreds of thousands of acres have become regular events in recent years, and a state official said that will continue if nothing is done.

“Smokey the Bear changed American perception of fire, because we’re taught that fire is bad for the forest,” said Jim deVos, assistant director of the Wildlife Management Division at the Arizona Game and Fish Department. “In a way that’s true, but in a way it’s not. Fire was a natural phenomenon in the forest.”

Wally Covington, regents’ professor of forest ecology and director of the Ecological Restoration Institute at Northern Arizona University, called the initiative the most ambitious project ever undertaken on federal lands.

Covington said the causes of forest overgrowth include the introduction of heavy livestock grazing in the early 20th century. That got rid of grass that had impeded growth of young trees.

Meanwhile, he said, fire suppression picked up because ranchers had livestock in the forests.

This area of the Coconino National Forest burned in 1996. An environmental impact statement that clears the way for a plan to thin nearly 600,000 acres in the Coconino and Kaibab national forests, a move that officials say will help prevent catastrophic wildfires. (Photo by Grant Marin)

“Then we had a series of pretty wet spring and summers, so there are a whole bunch of trees when you drive through the ponderosa pine forest that came in in 1919,” he said. “There was nothing to fend them out. They just kept growing and growing, resulting in the overstock that we see today.”

Ultimately, he said, the density is a direct result of the disturbance in the natural fire cycle.

“Fires once burned through these forests about once every five years, but they were fires that were burning through grassses and pine needles, they weren’t getting up into the canopies of the trees,” Covington said.

Kirkpatrick said the project may also revitalize the logging industry in Arizona, which declined in the 1990s as environmental groups pressed lawsuits.

“Arizona’s never had clear-cutting; we’ve always managed our forests in a good way,” Kirkpatrick said. “Part of what 4FRI is bringing back the timber industry so that they can take the wood product that is harvested and help create jobs.”

This is huge. We hope to restore the forests so that they can withstand these horrific wildfires.U.S. Rep. Ann Kirkpatrick

The companies Good Earth Power and Campbell Global are working with the Forest Service and community leaders on the project. Steve Rosenstock, habitat program manager with Game and Fish, said rebuilding the Arizona wood products industry to the point that it can handle landscape-scale forest restoration requires substantial investments in workforce, processing facilities and market development.

“Our hope is that completion of the EIS planning process will set the stage for the 4FRI stewardship contractor, Good Earth Power, to make these investments and ramp up their capacity to meet restoration objectives,” Rosenstock said.

A common criticism of Arizona’s logging industry was the tendency to cut down larger, older trees that many feel should be preserved. Sandy Bahr, director of the Sierra Club’s Grand Canyon Chapter, said the group’s main concerns about the project centered on how it would treat old-growth trees and how the treatments would affect wildlife.

“We are hopeful that the Four Forests Restoration Initiative will be different,” Bahr said. “Much will depend on the Forest Service, the contractors and the rest of us holding them accountable. It does present a good opportunity to do things right, where thinning is focused on smaller-diameter trees and there is more of an effort to restore natural processes.”