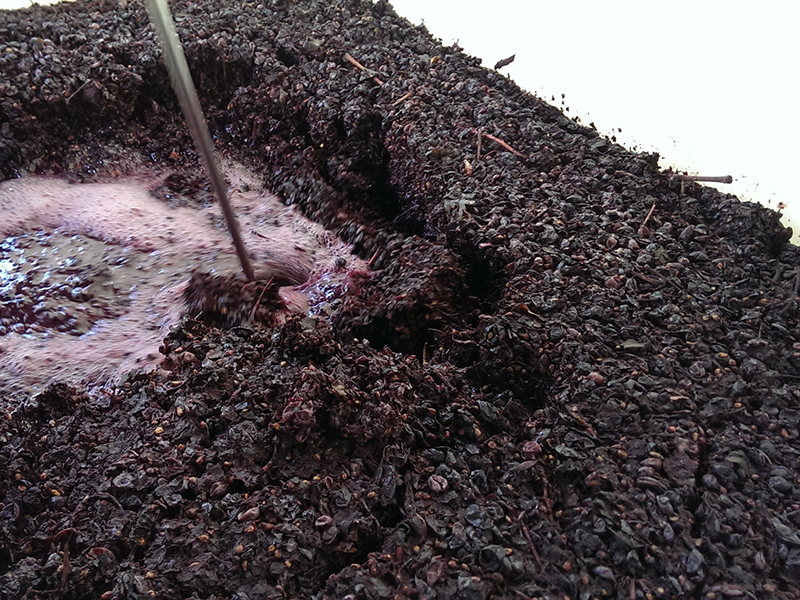 Javelina Leap is just one of many wineries to use traditional crushing methods to produce their wine. (Photo courtesy of Javelina Leap Winery) 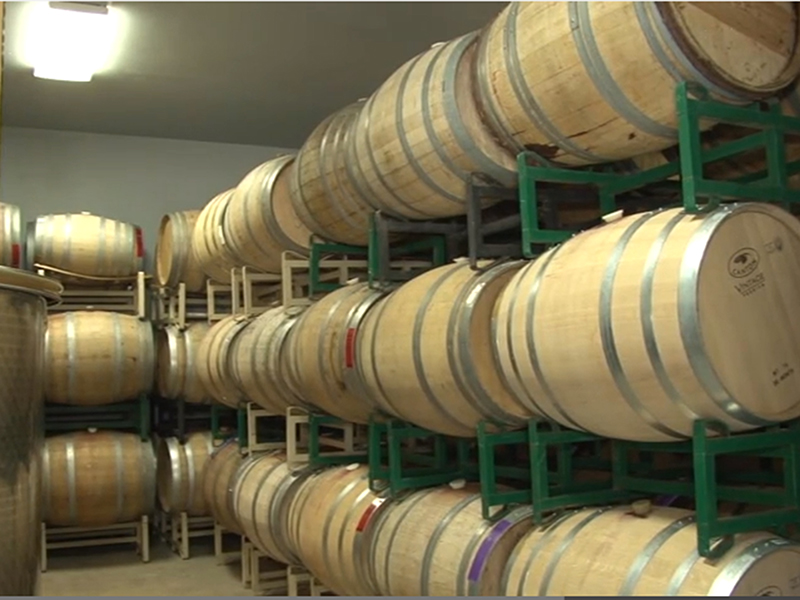 Javelina Leap Winery sits among grapevines in a small valley outside Cornville. The 10-acre property includes a vineyard, tasting room and production facility.

Owner Rob Snapp was one of the first to start his business in the burgeoning wine region. In the last 15 years, he’s seen the area grow from just a few acres of vineyard to a tight-knit winemaking community. Now, at least 70 acres of vineyard dot the landscape of this northern Arizona region just under an hour from Prescott.

Throughout Arizona, wineries have cropped up in droves. More than 90 locations have farm winery licenses in the state. They’re clustered in three general locations: Sonoita/Elgin in southern Arizona, Willcox in central Arizona and the Verde Valley near Prescott.

The wine industry grew gradually until 2001 when Arizona began to experience exponential growth. Wine production in the state soared nearly 700 percent in the 14 years since, well above the national average.

The winemakers have come to Arizona for the climate, business environment and love of the drink itself.

Snapp’s passion for wine began in California as a teenager and, like his product, matured as he aged. He became a chef and business owner, managing and cooking at a hotel and restaurant he owned near the Grand Canyon. Eventually, he sold the location and used his profits as seed money to start the winery.

“This was raw land when we got here,” Snapp said. “There wasn’t a road or a building or water or electricity, nothing.”

Snapp spent a lot of time learning the business and managing the estate. While he wouldn’t reveal Javelina Leap’s financial status, he said his business is doing well – and other wineries nearby share the same success.

A 2013 study done by the Arizona Wine Growers Association showed the Yavapai region produced about 72 tons of grapes that year, large enough to make tens of thousands of bottles of wine, but a small percentage when compared to other regions.

Arizona’s reputation has grown on the national stage, especially for wines in Yavapai County. For example, Page Springs Cellars, just down the road from Javelina, has garnered praise from multiple sources, including Wine Aficionado magazine, as a quality wine.

In the United States, California dominates the wine industry. The Golden State produces more than 80 percent of the country’s grape crush beverage.

Arizona pales in comparison, coming in at 28th in the U.S., according to the Alcohol and Tobacco Tax and Trade Bureau. But, the state has slowly moved up the ranks as wine production has increased. Experts said the state might see its ranking rise even further as Arizona wine grows as a business and commodity.

Many experts, vineyard owners and educators in the wine industry said Arizona has the potential to produce high quality wines, comparing it to regions of Spain, France and Italy.

Rod Keeling with the Arizona Wine Growers Association said Arizona has some key incentives that are attracting newcomers to the wine industry:

Arizona’s three-tier system of liquor distribution allows farm wineries to produce, sell and distribute wine themselves as long as they follow certain regulations, including a production cap.

“There are three licenses that fall under this regulation,” said Lee Hill with the Arizona Department of Liquor Licenses and Control. “Wineries, distilleries and microbreweries are able to do all three all under the same roof, so they have amazing privileges.”

According to statistics released by the U.S. Department of the Treasury, national wine industry production grew about 43 percent since 2001, and the number of wineries nearly doubled during the same period.

“It’s not just Arizona. The industry has exploded exponentially everywhere,” said Michael Kaiser with WineAmerica, a Washington, D.C.,-based public policy organization. “I think there are a few reasons for that. Obviously, wine consumption in the U.S. has increased. And as the industry has grown, people are realizing that wine doesn’t have to be from California to be good.”

Kaiser said that as younger consumers enter the wine market, they might have more interest in the local vintage.

However, Kaiser warned that the boon isn’t permanent.

“The wine industry will continue to grow, but the growth rate has slowed a bit,” Kaiser said. “One issue that some states have is that winery growth is outpacing vineyard growth and in some cases, there aren’t enough grapes to go around.”

That’s not necessarily the case in Arizona. The study by the Arizona Wine Growers Association indicated that most grapes produced in Arizona are used by the winery or vineyard that grows them, and vineyards sell very few grapes to others, in or outside of the state.

In a saturated national market, experts said the industry must continue to innovate to stay ahead.

So far, it has self regulated. In 2014, the Arizona Wine Growers Association joined other groups in pushing for changes to tasting room licensing, which will allow for greater growth.

The local wine industry has not conducted a full economic impact study, but the association estimated sales revenue at about $2.2 million for 2013.

Despite this small number, the Arizona wine industry is more than just for hobbyists. It has led to full-time job increases in these regions.

“It’s about seven businesses in one,” Snapp said. “We’re working all the time, bottling, racking, selling.”

One unexpected impact has been to education. Yavapai College in Prescott offers a variety of courses in winemaking and vineyard care in response to industry growth.

The school began with a single acre vineyard in 2010 and now has more than 15 acres and about 100 students.

As part of the program, students can earn a two-year degree and get practical experience through internships with local wineries.

“We are really trying to be a region wide resource, not just local or statewide,” said Michael Pierce, director of the enology (winemaking) program at Yavapai College. “This program didn’t exist 10 years ago. If it would have existed, I would have attended. So to be here and help build it is really cool.”

Some experts said they expect the industry to continue to grow as water becomes more scarce in Arizona.

“Wine grapes are a model for a high value low water use crop,” Pierce said. “Wine grapes don’t take nearly the water use of something like corn or soybeans or cotton would. So hopefully, wine grapes can take that over in the state.”

Perhaps the biggest challenge for the Arizona wine industry is the wine itself.

“I think white (wines) are doing really good. They are aromatic, expressive and acidic, which is really nice,” said Jason Caballero, lead sommelier for Vintage 95 in Chandler. “The reds are in a bit of an identity crisis. But when you think about it, we are at only about 30 years of growing, and every year they get only one shot.”

For Caballero, that youth plays a significant role. California has been in the industry since the 1800s and Europe for more than 2,000 years.

He said Arizona growers need to learn what types of grapes work best in this climate. The red identity crisis, he said, is as much from mixing a variety of grape types as from not growing what could work best in the state’s environment.

Price also plays a key role. Caballero said that on average, a bottle of Arizona wine costs $65 to $70, making it a hard sell for many customers.

“I understand people are getting in, and they want to recoup their cost, so I feel like sometimes it’s tough and they price themselves out,” Caballero said. “For that money, there are a lot of wines that many people will gravitate toward instead. I think if people will try it, they’ll like it. But a lot of times, people will go for tried and true kinds.”

Spreading the gospel of Arizona wine isn’t easy. Outside distribution is almost non-existent among Arizona wine growers. Most wineries make direct sales and self distribute, which makes getting wine onto tables more difficult.

And then there’s the state’s reputation as a desert location not suitable for wine growing.

But Snapp doesn’t see this as a problem at all.

“You know what we have more than anybody?” Snapp asked. “Sun! And soil. These are virgin soils in most of the state and volcanic soils. It’s one of the best growing soils in the world. You’d be crazy not to grow Arizona grapes in these soils.”

For Caballero and others, wine in Arizona isn’t a short-term industry but a future investment that is only now paying some dividends.

“Within 10 years, people are going to seek out Arizona wines over many others,” Snapp said. “It’s just the quality of the fruit.”