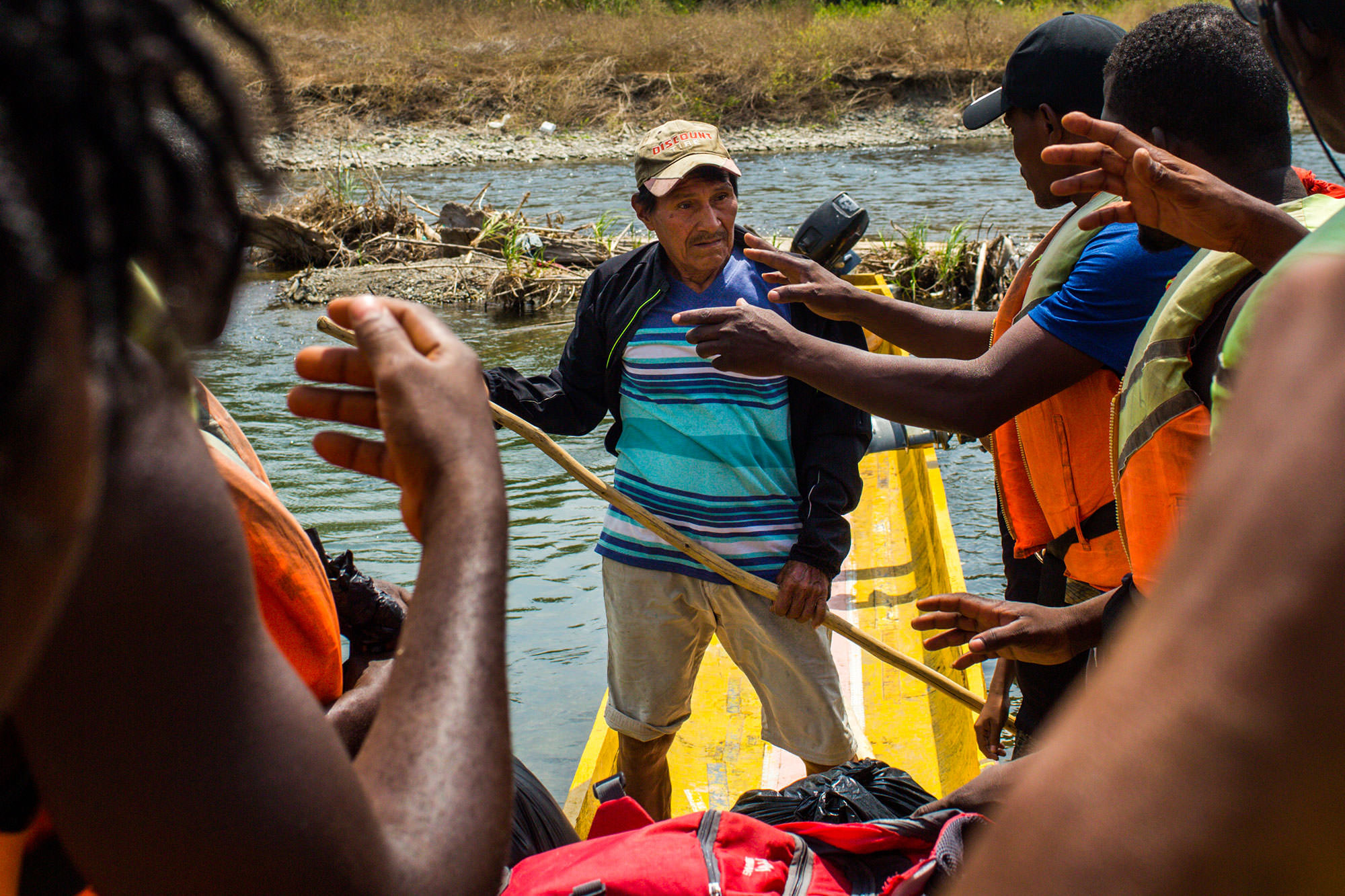 Boat operator and Panamanian farmer Juan Valazzco, 59, talks to migrants before taking them on a three-hour ride along the Tuquesa River to the next migrant camp on their route north, La Peñita.

BAJO CHIQUITO, Panama – The second we stepped out of the border patrol’s 4X4’s in the Bajo Chiquito camp for migrants, dozens of shouting men and women surrounded us, clamoring to tell their stories.

It was immediate, passionate, desperate. Men and women, mostly Haitian, were shouting in Spanish and French Creole, calling out their stories of crossing into Panama through the dangerous Darién Gap, showing their sick young children, pointing out their squalid sleeping quarters.

A few of us among a group of reporters from Arizona State University’s Walter Cronkite School of Journalism and Mass Communication broke away from the throng, urgently led by a man wanting to show us his baby who was sick and had rashes all over his skin from drinking from the Tuquesa River.

Everyone I saw was clearly exhausted and physically depleted, but there was a fire in peoples’ eyes and an urgency in their voices that I had never seen or heard before.

Bajo Chiquito is the first camp the migrants had reached since emerging from the Darién jungle that separates Panama from Colombia. Nearly everyone we spoke with came out of this jungle with harrowing stories – robbery, rape, discovery of corpses along the route.

The journey can only be made on foot – there is no road through the jungle – and generally takes 10 days or more. Many traveled with children. Many traveled pregnant. I had expected to see desperation and exhaustion. What I saw instead, I’m still trying to sort out. People were angry, defiant, Vice-Gripped on the hope that things would be better.

It is baffling the amount of horror that a person can witness and the amount of trauma a person can endure without bending to it. Of all the emotions I saw expressed in this camp, defeat didn’t seem to be one of them. These were people who had walked through hell, then simply continued walking. 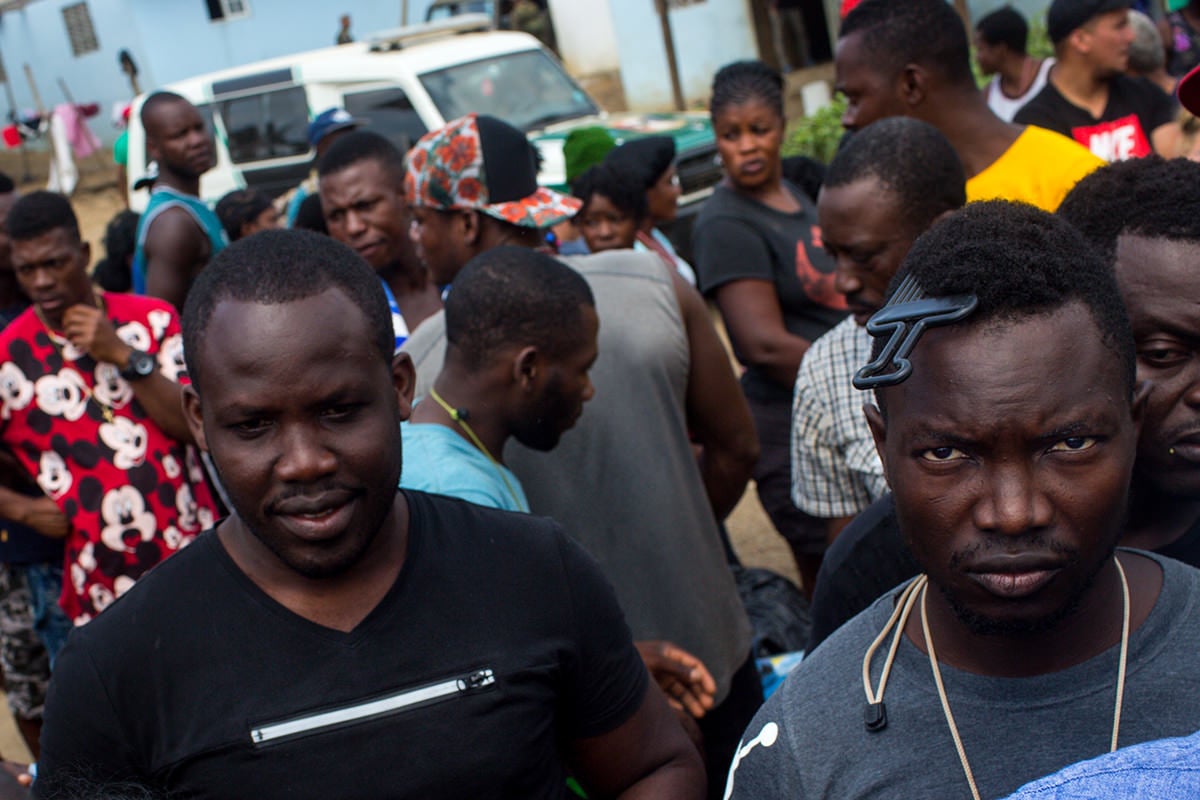 Migrants surround a SENAFRONT vehicle as it arrives at the Bajo Chiquito migrant camp in the Darién province of Panama on March 7, 2020. 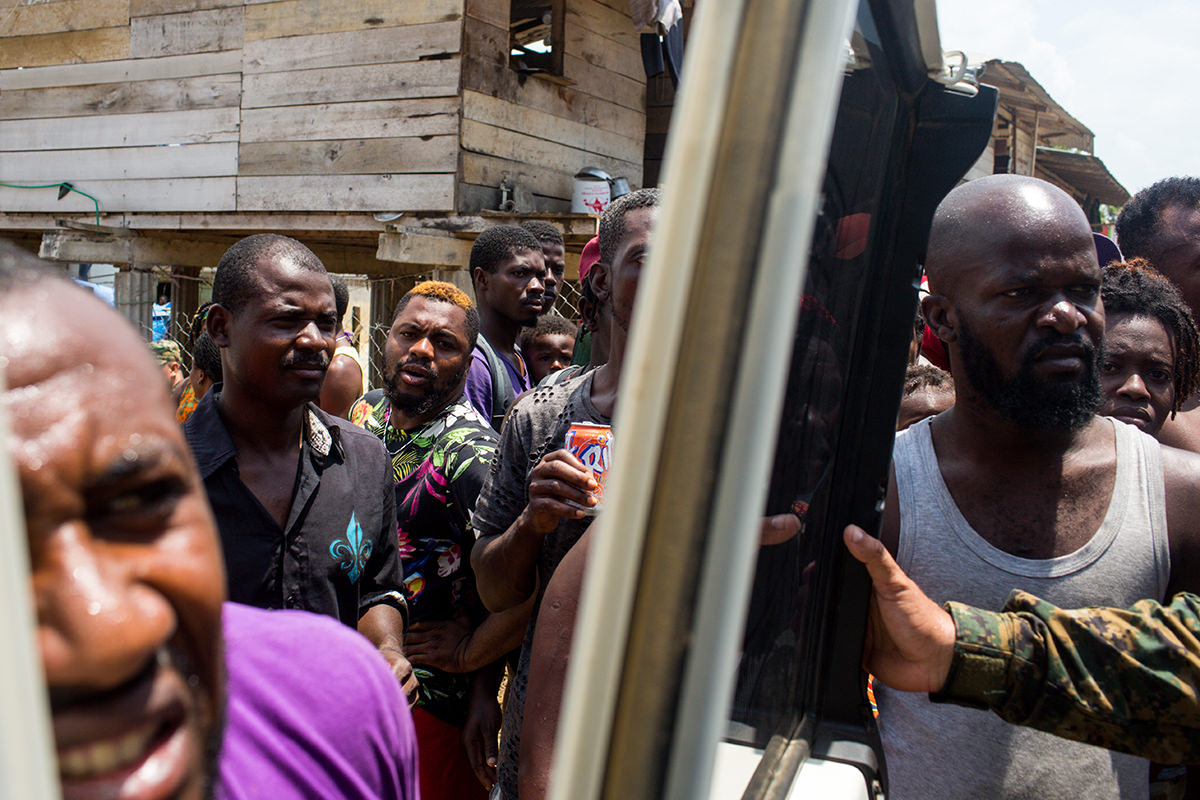 Migrants look on and some attempt to board a SENAFRONT emergency vehicle carrying an ill, pregnant woman to the next camp. 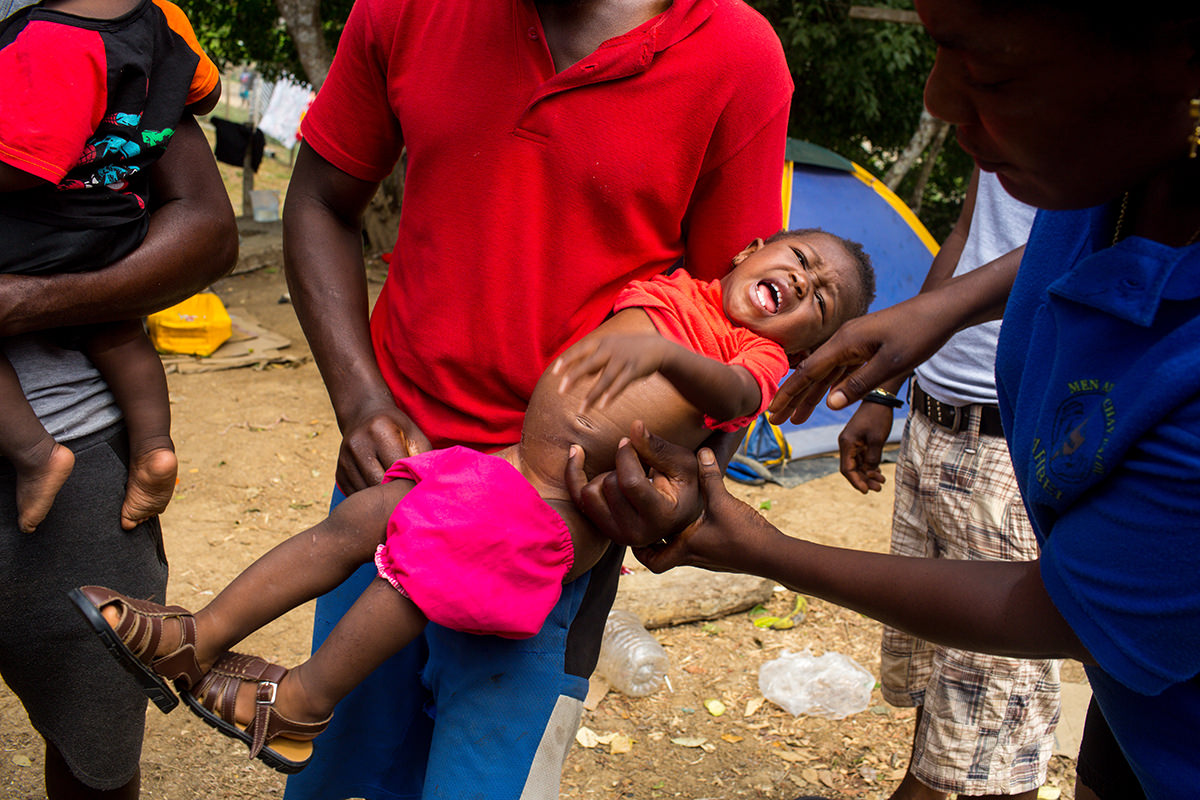 Patrick Danastor of Haiti shows a rash on the body of his 1-year-old daughter, Isabbella. He says the child got the rash from drinking contaminated river water while living in the Bajo Chiquito migrant camp.

Three of us were down at a bank of the Tuquesa, talking to migrants while they boarded small boats, about 20 at a time, to embark on a three-hour journey to the next stop, La Peñita, another migrant camp overseen by Panama’s border agency, SENAFRONT. Indigenous people run these boats, charging each adult $25 for the journey, the alternative being a six-hour walk in humid, intense heat to La Peñita.

After the last boat left, a man called me over to a small group gathered on the riverbank saying a woman was sick and needed to get to La Peñita where she could get medical care. They were waiting for another boat, which would transfer a group of pregnant women, but it was unclear when it would arrive.

She was four months pregnant, sitting on the ground at her husband’s feet, barely conscious and unable to answer his questions. Her husband periodically poured a bit of water in his hand and gently wiped it over her face. Other migrants gave him new bottles of water when he ran out. In a few minutes, she was unconscious.

Mircagnard Janvier, 30, and four months pregnant, lies unconscious on the bank of the Tuquesa river as a SENAFRONT officer radios for a stretcher.

Faustin Dieumes, 33, attempts to revive his wife, Mircagnard Janvier on the banks of the Tuquesa River, near the Bajo Chiquito migrant camp in Darién province, Panama.

SENAFRONT officers and her fellow migrants lift Mircagnard Janvier into an emergency vehicle for transport to La Peñita for medical treatment.

It is moments like these that show how much people have been through. I continued taking photos because that’s what the men and women around me were asking me to do, to show what was happening. I was shaking and probably crying a little bit. I was totally overwhelmed.

Her name is Mircagnard Janvier, 30. She was lying in the rocks on the riverbank. Her husband, Faustin Dieumes, 33, was nearly expressionless.

I remember the people in the circle around the unconscious woman very clearly. Two men calmly and quickly removed her orange life vest so she could breathe more easily and stay cooler. One woman outside of the circle protested that this was happening. A SENAFRONT agent radioed for a stretcher.

Still, I expected more panic and horror in the eyes of those who stood around her. I felt the gulf between my reaction and theirs. I was deeply disturbed. I also was acutely aware of how out of place that emotion was in this setting.

A pregnant woman was unconscious at the feet of her husband and the reaction around me was cool concern and general sadness but none of the sharp spikes of panic and urgency I felt and saw in the faces of my two colleagues.

These people had seen worse. 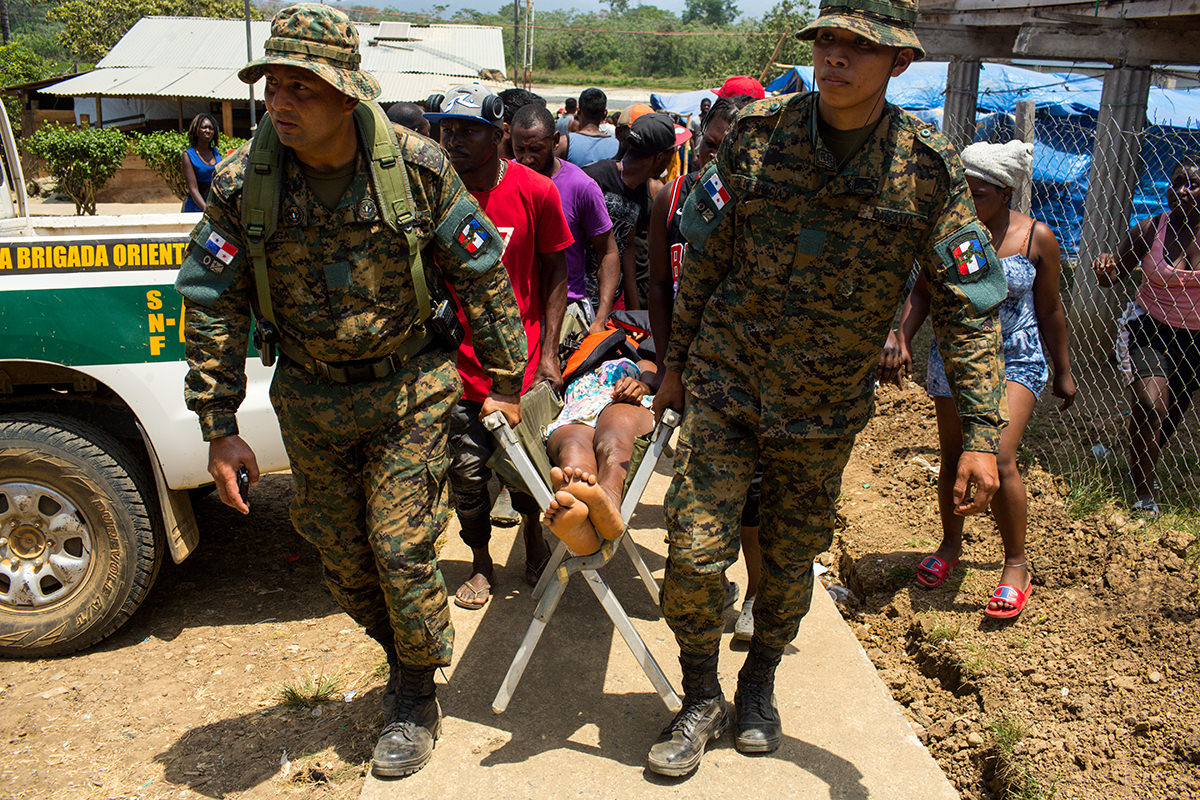 Officers and migrants carry Mircagnard Janvier to an emergency vehicle so she can get treatment for dehydration and an infection. 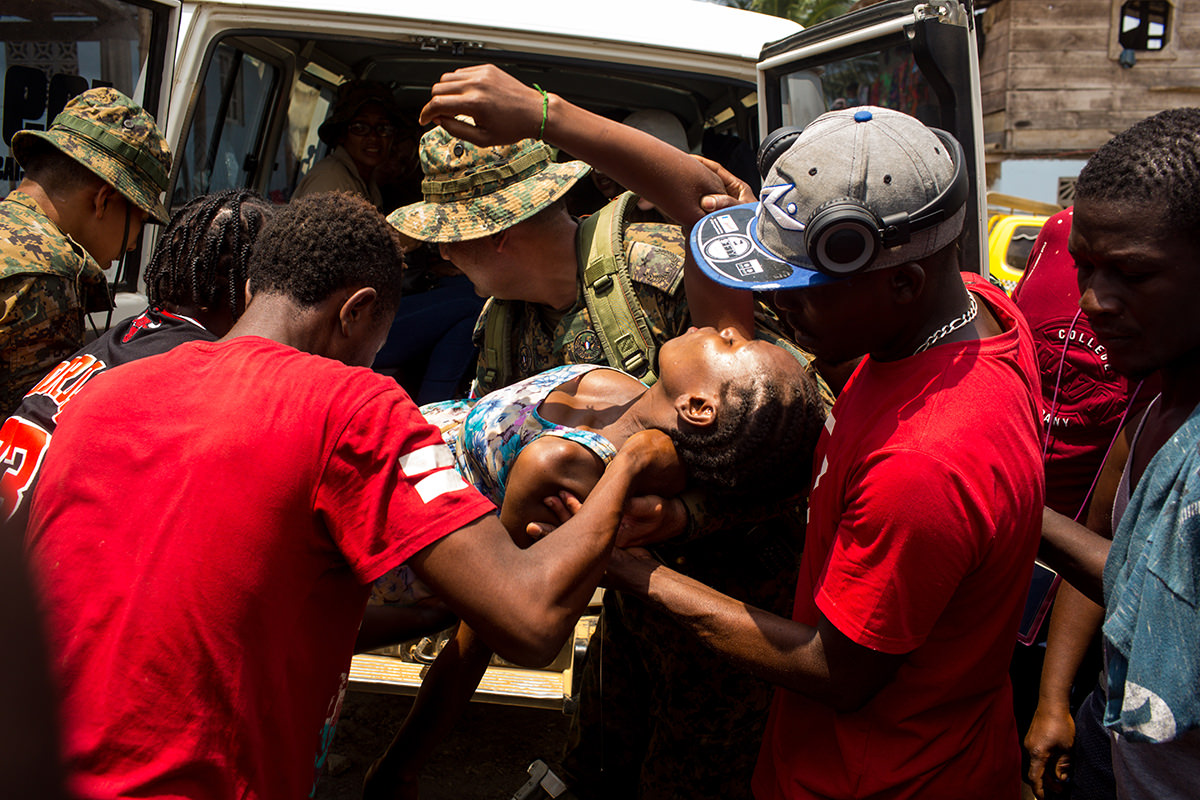 SENAFRONT officers, assisted by migrants, place Mircagnard Janvier into an emergency vehicle for transport to the La Peñita camp.

This was the first time I was genuinely confronted with how horrifying the life experiences were of everyone around me. Emergencies are relative. Had a pregnant woman become unresponsive in a shopping center in Phoenix, there would be urgency, commotion, people crouched on the ground next to her, yelling for a doctor, calling 911. If a pregnant woman were to trip and fall, there would be panic in the faces of those around her.

Here, I saw care and empathy but not shock or panic. This simply did not outrank the other emergencies that they had seen or experienced. The bar for what they considered horrifying had been long ago raised.

Just as I got seated in a SENAFRONT vehicle for the hour’s trip back to La Peñita, we saw Janvier being carried on a stretcher. I jumped out of the car, thinking I would photograph her as she was placed into a different vehicle. Instead, she was lifted, entirely limp, into the seat I had just vacated.

I stood, slightly dazed, in a throng of migrants figuring I’d be stuck in Bajo Chiquito. Someone grabbed my arm, pulled me into the SUV and shut the door. 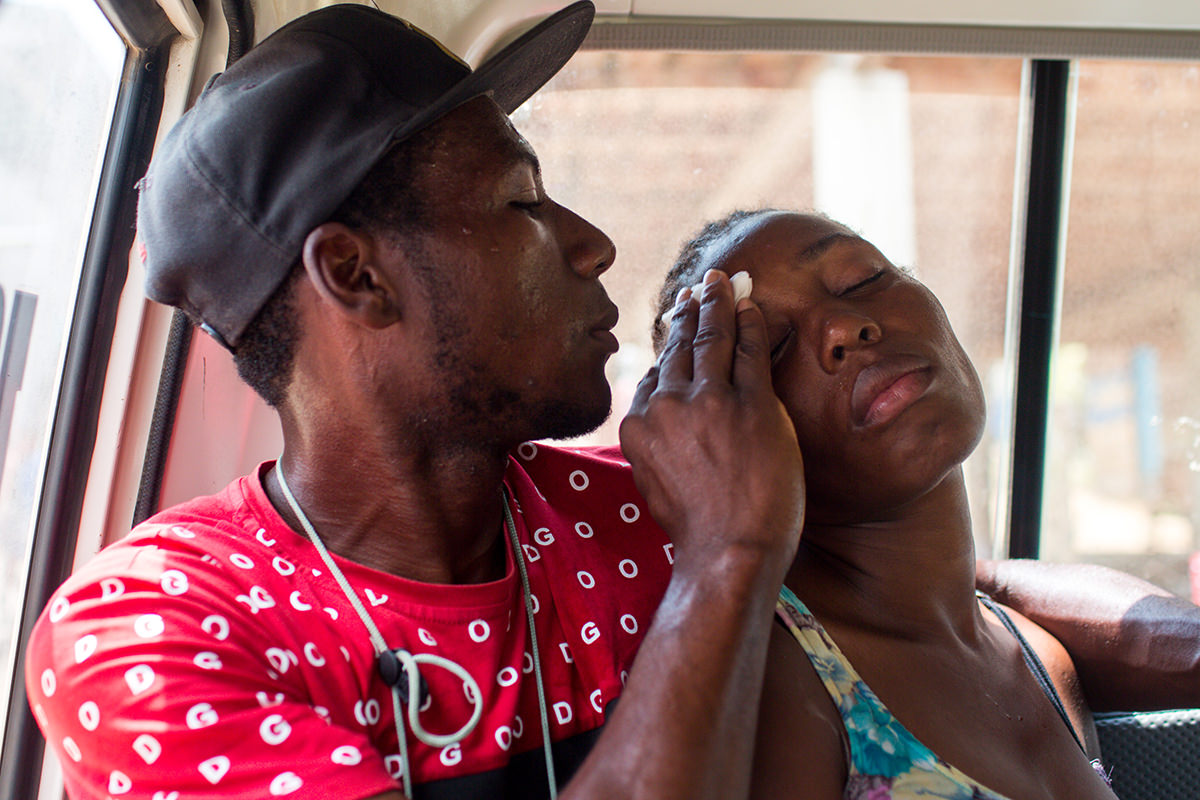 Faustin Dieumes, 33, wipes water over the face of his wife Mircagnard Janvier in a SENAFRONT vehicle as they ride from the Bajo Chiquito camp to a medic at the La Peñita camp.

We rode with Janvier and her husband to La Peñita. I sat across from them, taking photos and asking what he needed. I watched as he periodically poured a bit of water into his hand and wiped it gently over her face. He was covered in sweat, yet his face was calm. Apparently, she had been sick for some time, and it had gotten much worse over the past few days. They’d run out of money to buy purified water and had been instead drinking from the river.

In La Peñita, she was taken to the medic’s tent, then transferred to a hospital in Meteti, a town another hour’s drive north. Later that day, she was conscious again and hydrated. 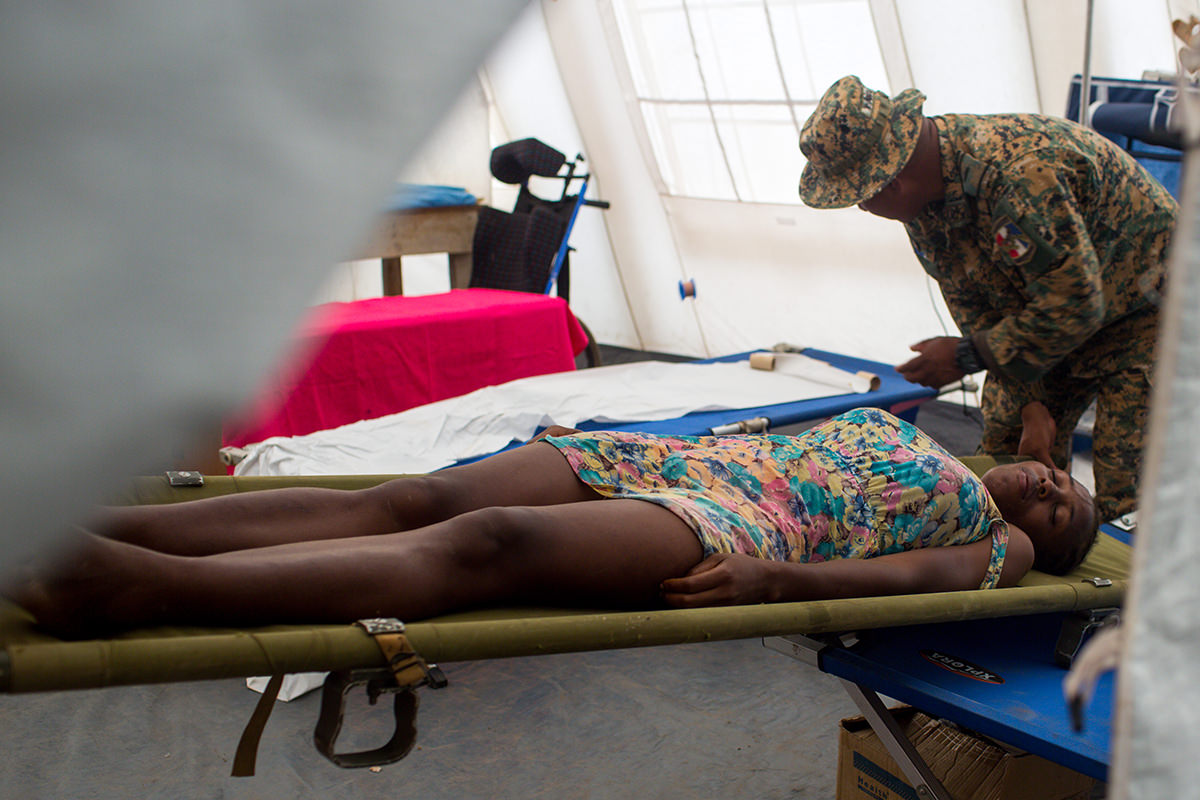 Soon, if the normal process played out, they would be sent north to another SENAFRONT camp in Chiriqui, waiting for their turn to cross into Costa Rican to continue forward. They were hoping to reach Mexico, where they had friends and the possibility for work. The U.S. is too far, out of reach. They were striving, undeterred, for better lives for themselves and their unborn child. These are snapshots of life I will not forget.