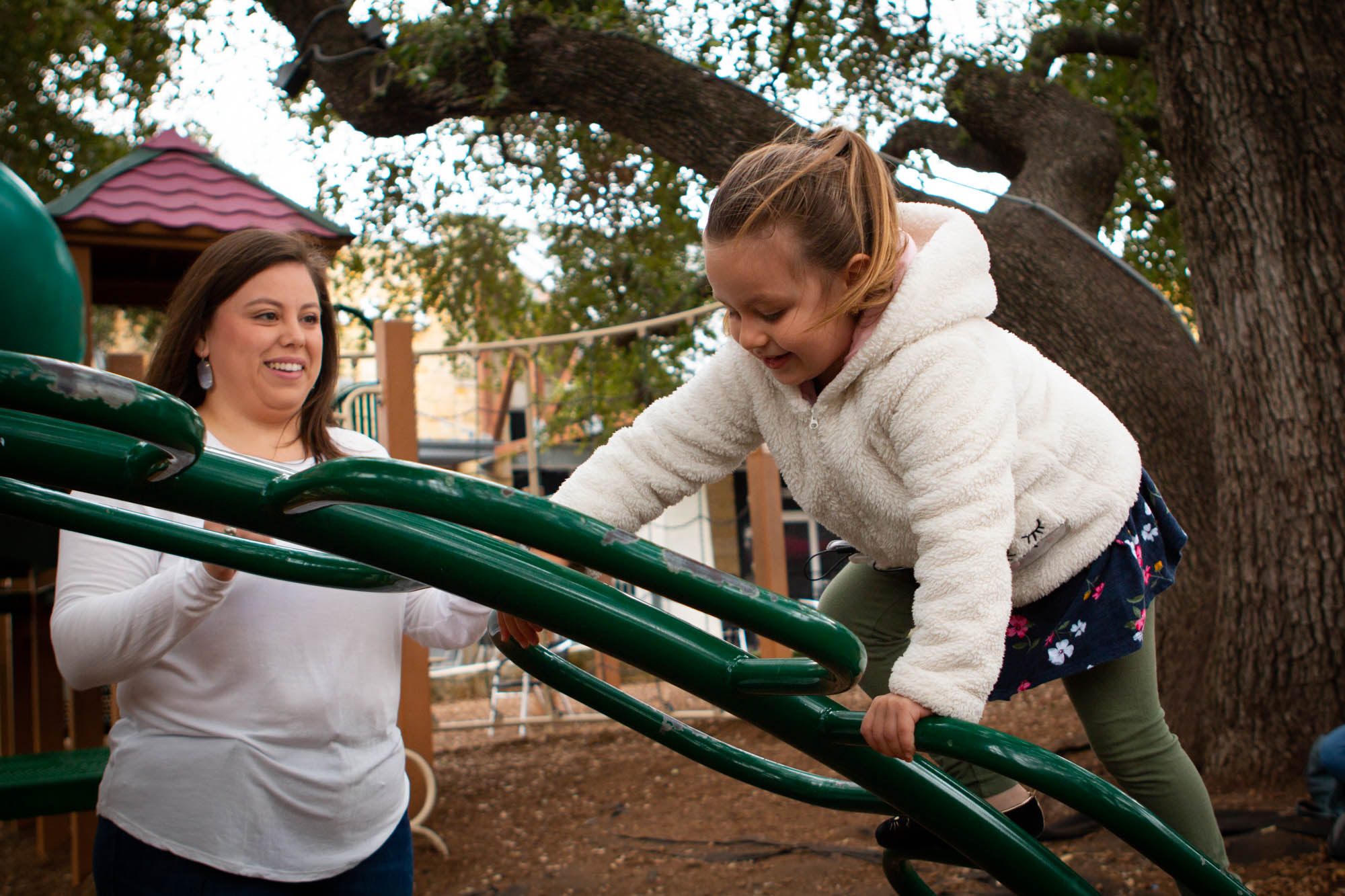 Karen Gonzalez, chief program officer for Con Mi Madre, plays with her 5-year-old daughter, Karlie, at a playground in Austin, Texas, on Sunday, Feb. 23, 2020. Gonzalez participated in the Con Mi Madre program as a girl, and it helped her reach her goal of going to college. She hopes to pass those passions on to her daughter. “College will just be part of our language, part of our family structure. … It’s already ingrained in me, so it’ll be that much easier for me to transfer that over to my child.” (Photo by Delia Johnson/Cronkite News)

AUSTIN, Texas – In a charter school gymnasium on the city’s north side, dozens of families fill the bleachers as four pairs of Latina mothers and daughters talk about emotions too often considered taboo in their culture.

Building strength. Having courage. Forming bonds, as parent and child, to overcome any hardships that may come their way.

Elizabeth Rodriguez and her daughter, Lizbeth Okumura, sit side by side before the crowd.

For more than eight years, the two have been part of an organization that aims to help Latinas succeed by strengthening the relationship between mother and daughter.

Lizbeth is 20 now and set to graduate from Texas A&M University in 2022. Rodriguez, 46, is about to earn her associate’s degree. The group, Con Mi Madre, motivated both of them to achieve their goals.

“It is very normal to feel afraid” as their children grow up and face all sorts of challenges, Rodriguez tells those in the audience. Her incisive advice: “With close communication, maintain a relationship with her.”

Rodriguez and Lizbeth are just two success stories of a program meant to help Latinas flourish in school but also in life by working to build self-esteem and resilience among a group of young women that’s long faced unique mental health challenges. 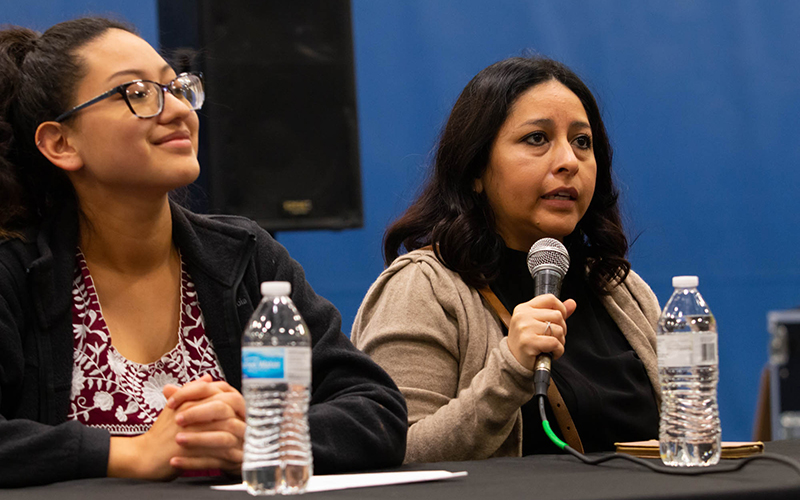 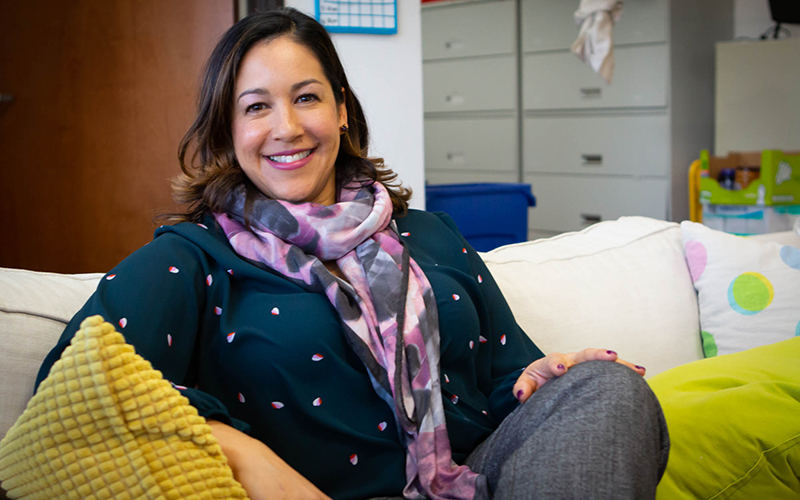 “The work that we’re doing goes at the root of an issue,” says Johanna Moya Fábregas, executive director of Con Mi Madre, which means “with my mother.” “It helps prevent a lot of the problems that many teenagers face – like not feeling worthy or feeling isolated, suicide – all those things that if you have a very strong foundation, you are less likely to deal with.

“Or, even when you deal with them, you’ll have the tools to navigate those problems.”

Con Mi Madre takes a distinctive approach to addressing a plight facing young people across the nation, Latinas in particular.

Studies show that more youth – girls especially – report experiencing depression. Even more troubling: After remaining stable for years, the country’s youth suicide rate increased 56% from 2007 to 2017, according to federal statistics.

For decades, reports have found that Hispanic teenage girls attempt suicide at a higher rate than white and black teenage girls.

Such statistics have sounded an alarm among mental health advocates and prompted projects specifically for Latinas, including Life Is Precious in New York City, which provides education, art therapy and other services to improve mental health, and We Are Not Invisible, a report spotlighting challenges Latinas face in school in Philadelphia, along with strategies to bolster well-being.

Con Mi Madre started in 1992 with a different aim – to increase the number of Latinas who stay in secondary school and go on to college. The nonprofit has one requirement: Girls must join with their moms or another influential person in their lives. 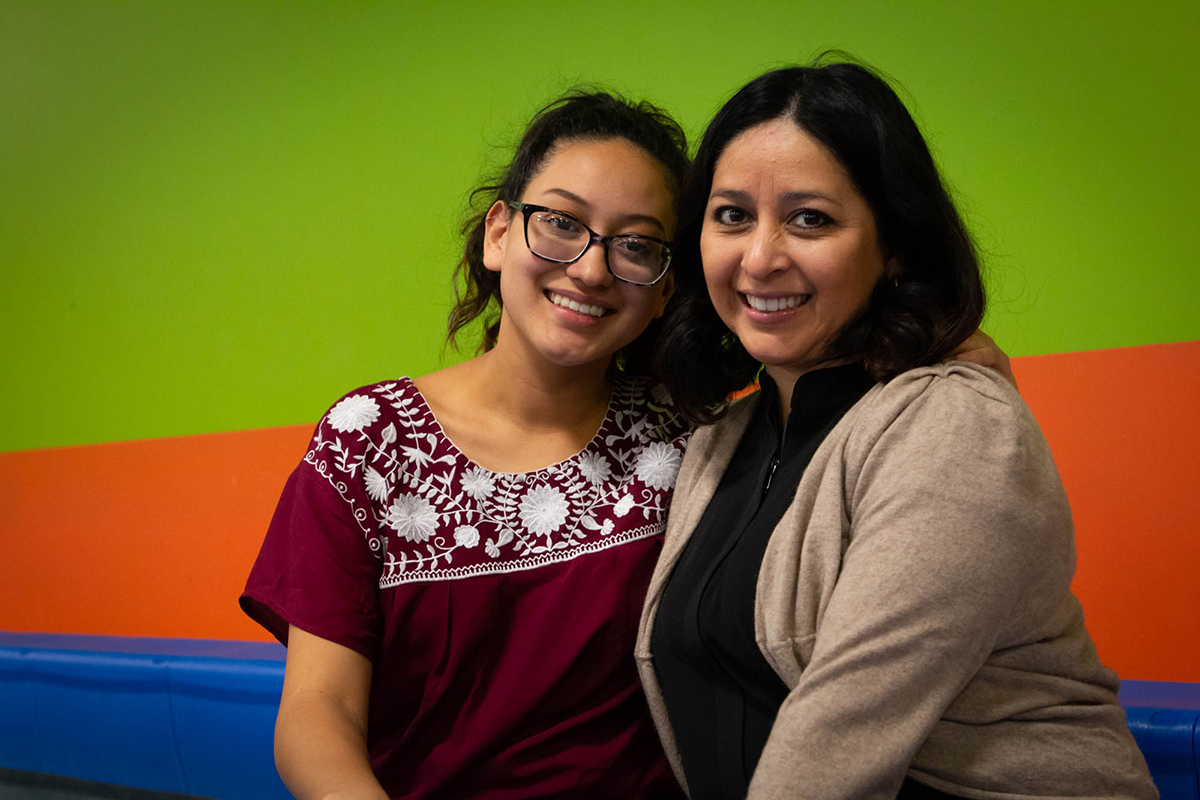 By working together toward a shared goal, Con Mi Madre participants strengthen personal relationships, build emotional resilience and bridge cultural and generational gaps that can leave Latinas struggling to find their place among peers.

“Building confidence and empowering someone gives them access to exposure to new environments, to new situations, to new opportunities that otherwise they would feel that they have no place being there,” Moya Fábregas said. “Especially if you’re coming from a background where you haven’t had exposure to a different array of people … it could be very intimidating.”

Luis Zayas, dean of the Steve Hicks School of Social Work at the University of Texas at Austin, has been studying the mental health of Latinas since the 1980s and authored the book, “Latinas Attempting Suicide: When Cultures, Families, and Daughters Collide.”

His research found a convergence of issues affecting the mental health of Latina girls and teens.

They face the same struggles as other girls as they begin to test the bounds of autonomy and self-expression. But Latinas, especially those whose parents are recent immigrants, also must balance cultural traditions with growing up in contemporary America.

Having a strong familial relationship is one of the common threads that connects girls who are more emotionally resilient, Zayas said.

“There was one unique finding,” he said. “The better the girl’s relationship to her mother was, the less likely she would be to attempt suicide.”

Zayas, who has seen the work of Con Mi Madre firsthand, said: “This is the antidote.”

“What they (are) doing is strengthening the mother-daughter relationship … getting them engaged early on in the middle school years – together – making, essentially, contracts with each other.”

Though addressing suicide and mental health is not the organization’s primary aim, “that was one of the great byproducts,” Zayas said. “And that’s why Con Mi Madre is so powerful in its effects.” 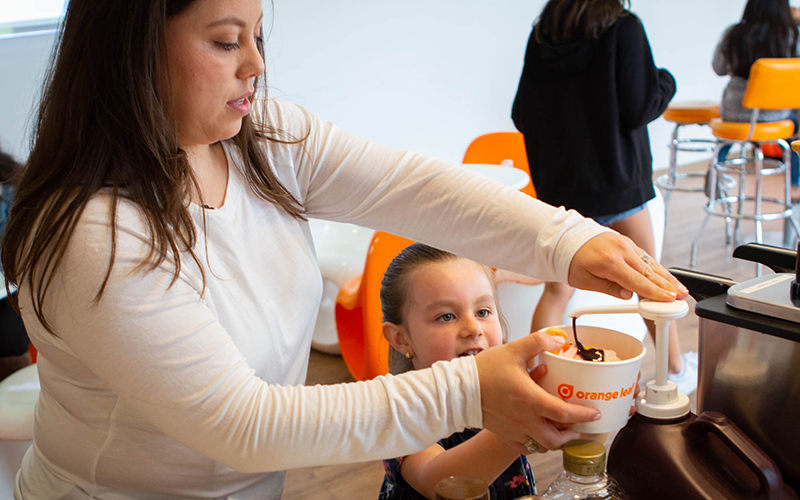 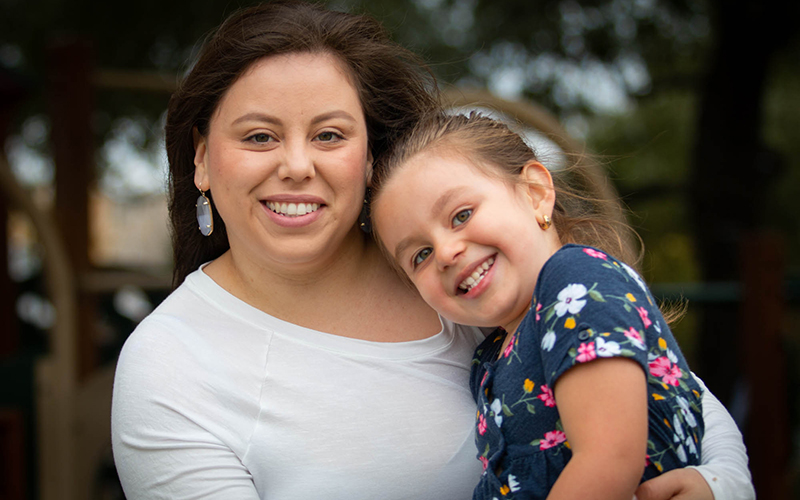 By reaching out to the elementary schools that feed into middle schools around Austin, the organization works with administrators and counselors to identify which girls would be a good fit for the program. Then families are contacted individually.

Through its three pillars – preparedness, participation and success – Con Mi Madre guides Latinas through middle school and high school, and on into college. Activities include daughters-only workshops, mothers-only meetings and combined events for all.

Workshops for daughters are aimed at building their confidence and self-esteem, while the mothers talk about how to better connect with their daughters and bridge cultural gaps.

The organization, which has expanded to Fort Worth and El Paso, advises more than 900 young Latinas and their mothers every year and reports that 100% of the high school seniors involved in the program graduated in 2019.

Elizabeth Rodriguez, originally from Mexico City, was contacted by Con Mi Madre when Lizbeth was in third grade. She decided to enroll both her daughters as soon as they became eligible.

Rodriguez learned not only about the importance of education, but how to help her children avoid gangs, stay safe in an online world and apply for and succeed in college. She said she has come to consider Con Mi Madre a partner in raising her girls.

“The program was very supportive just to keep our family attached. … I am very grateful to see my daughters not be in dangerous situations or making wrong decisions.”

With her older daughter now out of college and Lizbeth at Texas A&M, Rodriguez said she grows closer to her children every day.

Despite her training with Con Mi Madre, Lizbeth acknowledged she was reluctant to talk with her mom about certain things while in high school. Now, she opens up far more.

“We’re talking about more adult problems, more personal things,” she said. “In high school, I wanted to keep everything to myself.

“In that sense,” she said of her transition to college, “it strengthened us.”

Lizbeth said she faced emotional struggles after A&M initially rejected her application. She attended community college but felt like a failure, had few friends and sometimes just wanted to go home.

The program provides assistance with financial aid, housing, home sickness and other obstacles either in person or via Skype, text or telephone; workshops twice a semester to talk about course enrollment and college life skills; and networking events.

“As a college student, you don’t know the difference between, `Oh, you’re just overreacting’ or if you need to be diagnosed with depression and anxiety,” said Lizbeth, who also turned to her mother for advice.

“With her words,” Lizbeth said of her mother, “She gave me purpose.” 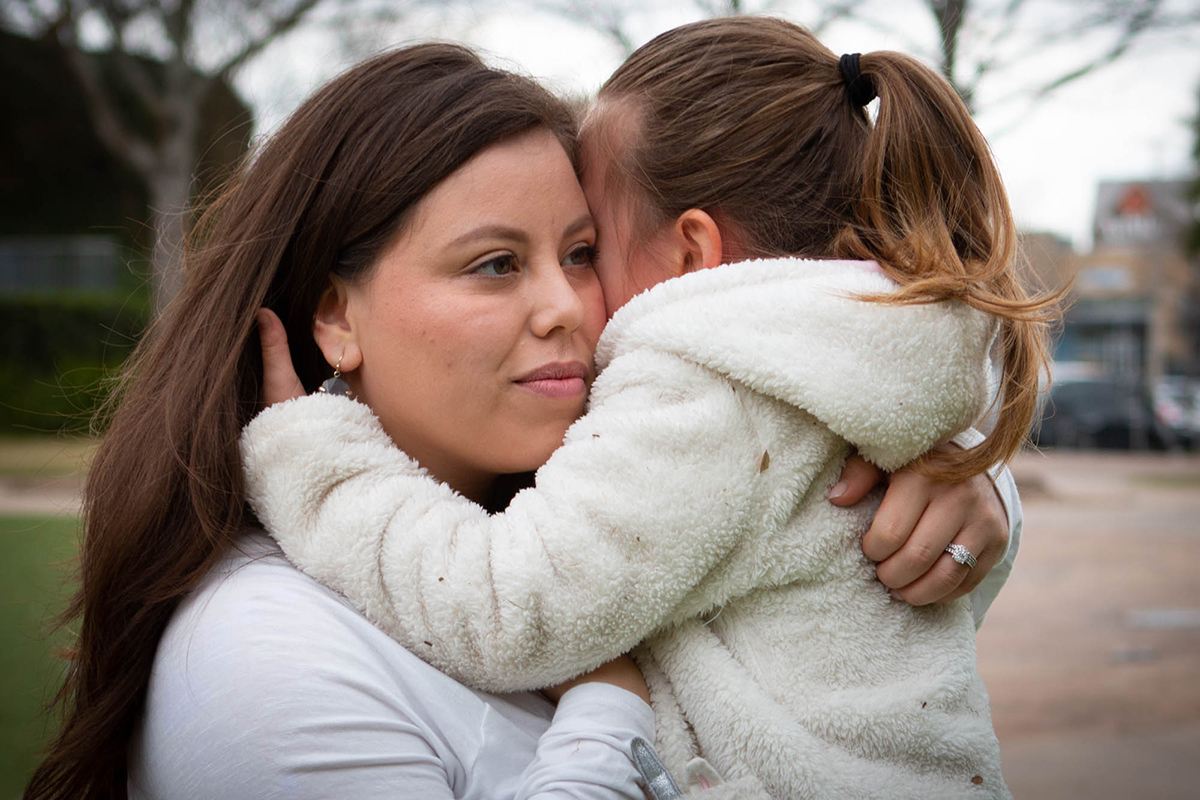 In 2001, when she was 11, Karen Gonzalez became a member of Con Mi Madre – fondly called “Con Mi Karen” by those who know her well.

She and her family had moved to the U.S. from Toluca, Mexico, and Gonzalez clashed with her American peers. Many had fewer rules to follow, and Gonzalez didn’t have the same liberties. She sought the help of a school counselor, who recommended Con Mi Madre.

“Mental health in general in our culture is still very stereotyped,” Gonzalez said. “If you speak up about some of these things and other people around your community or your family hear it, then that brings shame to your family. That means your family is not doing the right thing.”

Gonzalez faced an emotional low point her senior year of high school. She earned a full-ride scholarship to any institution of her choice, but that opportunity was snatched away once the scholarship organization found out she wasn’t a U.S. citizen.

She thought she’d never achieve her dreams of getting a college education, but a former program director at Con Mi Madre convinced her she could.

Gonzalez recalls those words of support: “‘You just have to follow these steps, and they’re a little bit harder, but they’re going to get you to the right place. You have what it takes.'”

She went on to earn both a bachelor’s and master’s degree from Texas State University, became a citizen, and has served as Con Mi Madre’s chief program officer for the past seven years – working to help others get past the kind of cultural barriers she faced as a teen.

“For me,” she said, “Con Mi Madre really was that space to understand that it’s OK to speak out.”

She connects Latinos and Spanish-speakers to culturally competent mental health treatment, and understands how hard it can be in Latino families to be open about emotional struggles.

“Growing up as someone who struggled with anxiety and depression and has had my own suicidal ideations, it was really hard for me to go to my mom,” Chimbo-Andrade said. “I completely understand being that Latina daughter and not feeling comfortable going to your parent and keeping my feelings submerged. It brought me to a very low point.”

She hopes that her work, both professionally and at home, helps the next generation overcome those obstacles.

“I don’t want that for my daughter.”

At Con Mi Madre, Gonzalez, too, hopes to share some of the wisdom she’s learned with more and more young Latinas – to help change their futures as her own was once changed.

And one day, her daughter, Karlie, 5, will join the group, following in her footsteps.

“My No. 1 hope is that she knows that I’m there, no matter what … and no matter what it is, we’ll figure it out and we have the resources to do so,” Gonzalez said. “That’s another big thing that I’ve learned through Con Mi Madre. There’s so many things out there, whether it be our program or other resources that are needed for different hardships.