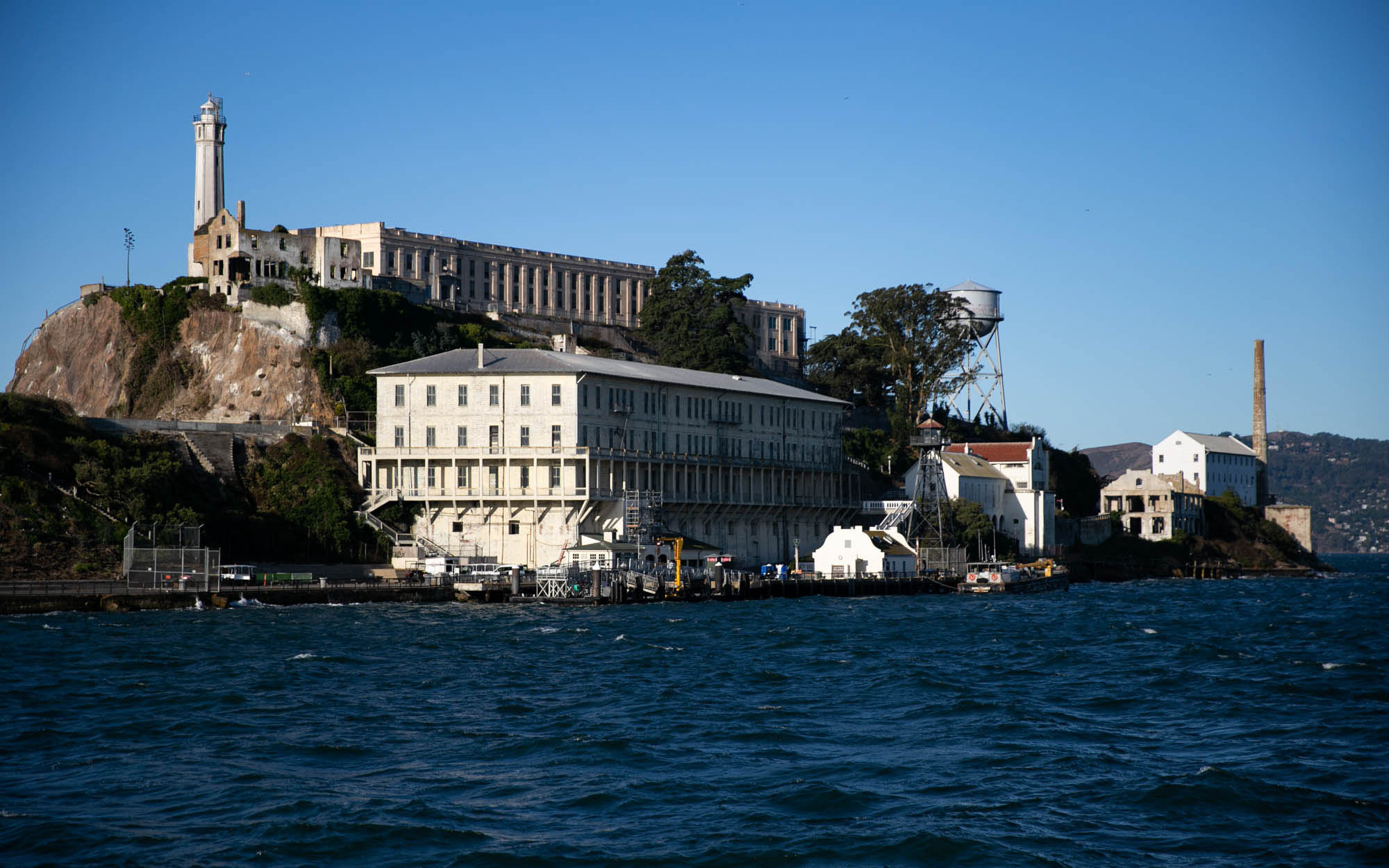 Alcatraz Federal Penitentiary closed in 1963 but never officially was returned to indigenous people under the Treaty of Fort Laramie of 1868, which promised the return of unused federal land to its original occupants. (Photo by Grayson Schmidt/Cronkite News)

SAN FRANCISCO – With a paintbrush in one hand, a can of red paint in the other and a cowboy hat atop his graying head, Dennis Turner began up-and-down strokes along a white brick wall that faces the San Francisco Bay.

He traced the same word he painted 50 years ago on a decommissioned prison building on Alcatraz Island: Indianland. 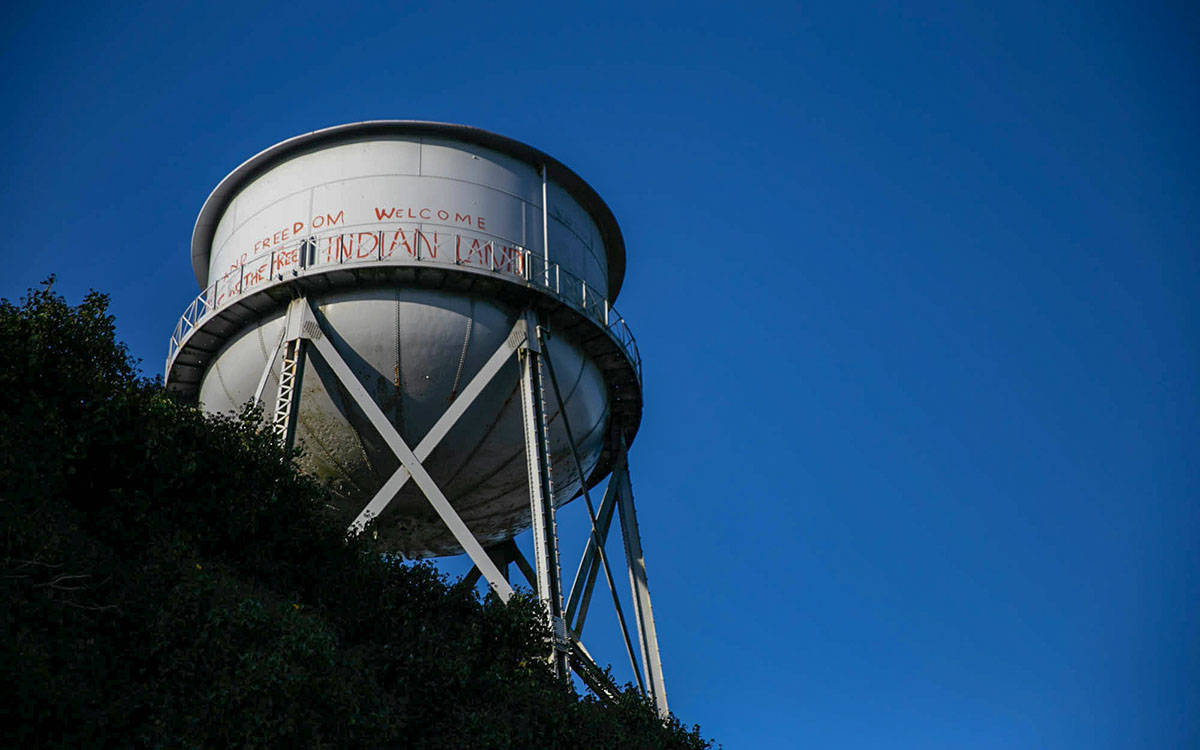 Alcatraz Federal Penitentiary closed in 1963. The island originally belonged to the Ohlone people before the federal government declared it a military reservation in 1850. (Photo by Grayson Schmidt/Cronkite News)

“I wanted to repaint it to keep our nation, the United States of America, conscious of the Native American people and their problems,” Turner said.

In 1969, defiance defined the day: Along with 88 other activists, the 20-year-old college student canoed to Alcatraz to symbolically and literally take back Native American land from those who stole it.

Turner, a member of the Luiseño Indians from Southern California who now lives in Valley Center, was among a group of activists from 50 years ago who returned to “the Rock” in November to reflect on the 19-month “Red Power” occupation and remind the next generation of activists what they’re still fighting for.

The island, which originally belonged to the Ohlone people, was declared a military reservation in 1850. In 1934, it became Alcatraz Federal Penitentiary, holding some of the most notorious criminals in American history before it closed in 1963.

On Nov. 20, 1969, activists from tribes across North America took back Alcatraz for Indigenous people, and to call attention to the 1868 Treaty of Fort Laramie, which promised the return of out-of-use federal land to its original occupants. The group was known as Indians of All Tribes. 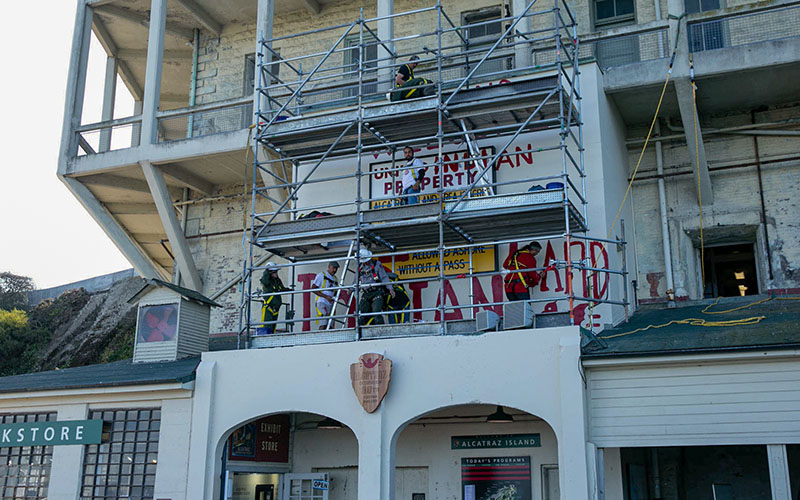 Some of the original occupants and their family members were asked to repaint the same structure they painted 50 years ago. (Photo by Grayson Schmidt/Cronkite News) 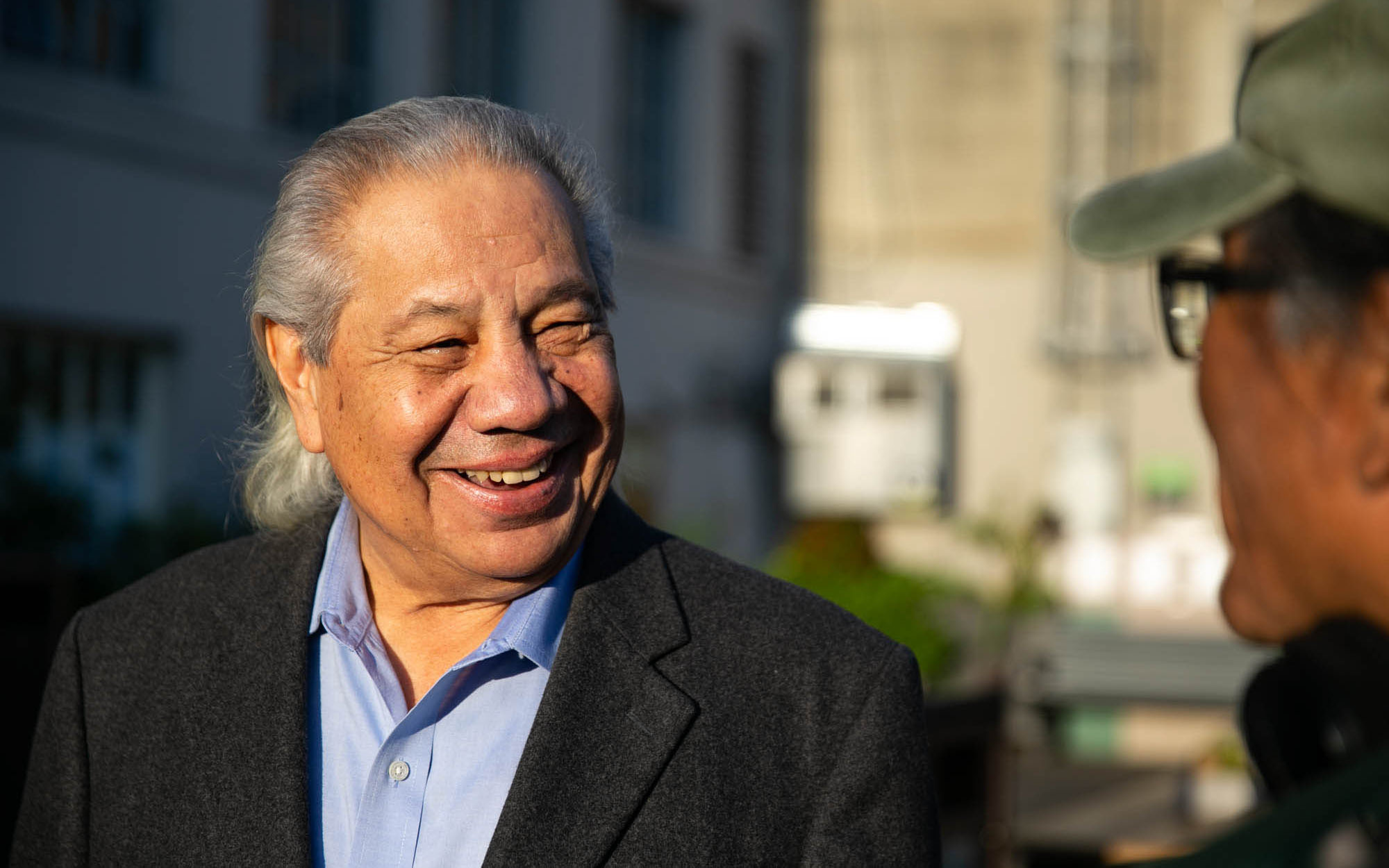 John Echohawk, attorney and founder of the Native American Rights Fund, was one of the speakers at the anniversary ceremony. Echohawk discussed the occupation's impact on Native American sovereignty. (Photo by Grayson Schmidt/Cronkite News)

Turner, a resident of Valley Center, was one of the first occupiers to arrive, and he stayed on and off the island for most of the 19 months. His elders inspired him to defend his way of life and traditions, especially with a major push in the mid 1950s to move Native Americans off reservations and assimilate them into a more “American” lifestyle, he said.

“We went there knowing that Native American people needed to stop the devastation, the atrocity, the genocide that was happening in the tribal nations throughout the North American continent,” he said. “By demonstrating and occupying the island, we thought that could be the beginning, and it was.”

Other original occupiers, such as Eloy Martinez, 80, who is Southern Ute from the Four Corners region, told the crowd of more than 100 that he was proud to see so many of his fellow occupiers return to Alcatraz from across the country.

“This is awesome, and to know that this journey is still continuing, we’re still here, and a lot of the people that were here a long time are still active and are still doing it, and we’re not going to quit,” Martinez said.

Jason Morsette was one of the hundreds of people who went to Alcatraz to commemorate the "Red Power" takeover of the island 50 years ago. (Photo by Grayson Schmidt/Cronkite News)

There are 573 federally recognized Indian tribes, nations, bands, pueblos, communities and villages in the United States, according to the National Congress of American Indians. (Photo by Grayson Schmidt/Cronkite News)

Three generations of Turners were on Alcatraz that day last month to support the family patriarch on the 50-year anniversary of the movement that shaped his life.

“It became a realization (that day) that ‘Wow, my grandkids are here, my sons and daughters are here. I mean, am I a lucky person or what?'” Turner said.

As emotional and impactful as Turner’s return to Alcatraz was, it was not his first time back since 1969. His daughter Tishmall, 45, said when her father returned to Alcatraz two years ago, he declined the device tourists use on self-guided tours to learn about the former prison, which was included in the Golden Gate National Parks in 1972.

“He just said he didn’t need one of those,” she said with a laugh.

As vice chairwoman of the Rincon Band of the Luiseño Indians Tribal Council, Tishmall Turner felt pride not only in her father and her tribe, but also in the impact made by the Indians of All Tribes.

“To be able to relive that history, and see that 50 years later American Indians are recognized on the island … we’re still here and part of the history of a national park,” she said. 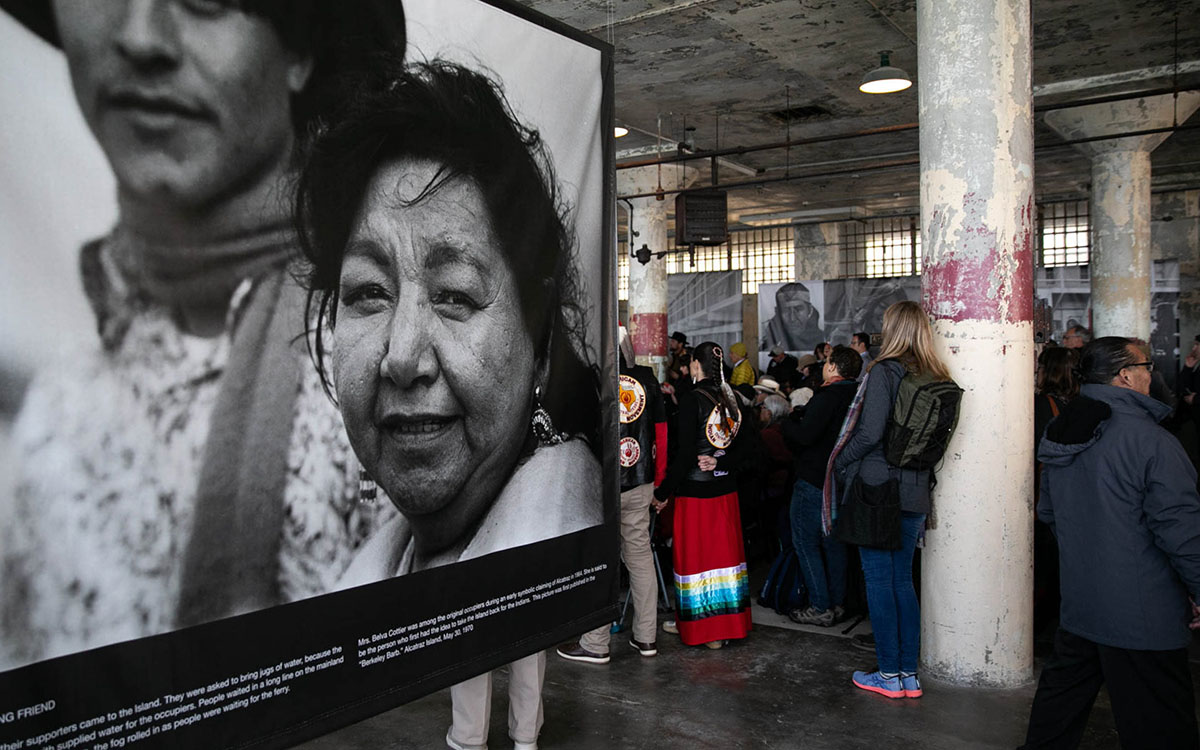 The exhibit 'Red Power on Alcatraz: Perspectives 50 Years Later' features original photos, news clippings and artwork from native artists. It will remain open for 19 months, the same length of time as the original occupation. (Photo by Grayson Schmidt/Cronkite News)

Passing along tradition and preserving land is core to the Native American principle of seventh generation stewardship – making choices that will serve many future generations. In the United States, there are 573 federally recognized Indian Nations, known as tribes, nations, bands, pueblos, communities and native villages, according to the National Congress of American Indians.

Turner made the trip to Alcatraz as a 20-year-old student at the University of California, Santa Cruz, and as a 70-year-old man because there are persistent inequalities that face tribal communities to this day.

“They’re building reservations without electricity, without water, so that’s what I was thinking about when I started to repaint,” Turner said.

As Turner walked through a new exhibit, called “Red Power on Alcatraz: Perspectives 50 Years Later,” he paused in front of one image. The enlarged black and white photo featured a young Turner and his wife, Mary, standing in the former cellblocks of the federal prison, peering solemnly out of frame. 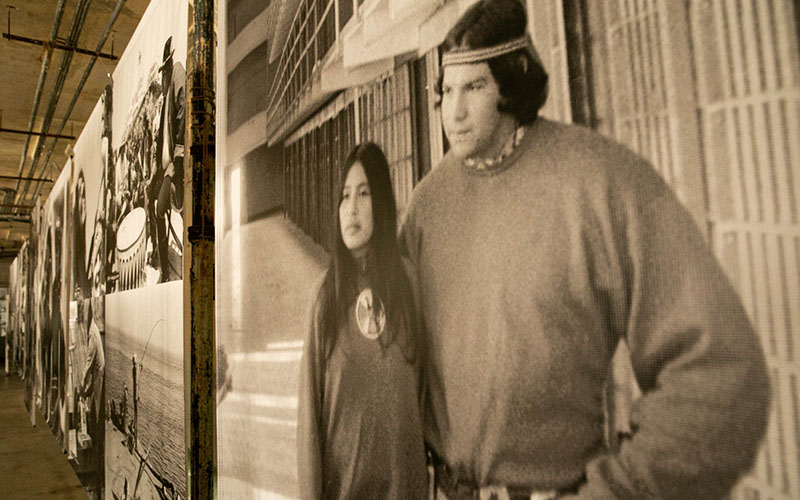 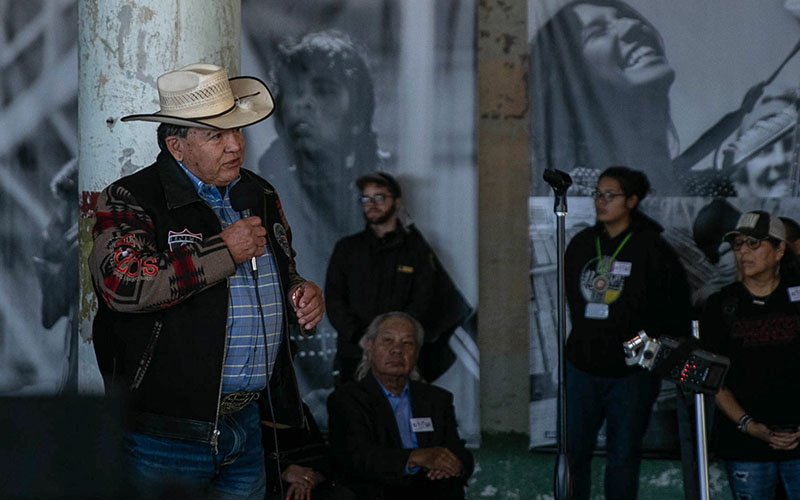 “It reminds me that I should still be strong,” Tishmall Turner said. “When you look at them in that picture, they’re not smiling. They are stoic, and I hope to continue to forge my leadership in that same way for future generations.”

For Turner, that image brings up the same question he asked half a century ago: Why am I doing this?

“I hope that they (younger generations) understand that without our religion, culture, traditions, our sovereign right and our health, we would not be tribal nations,” he said. “We need those. Without them, we’ll perish.” 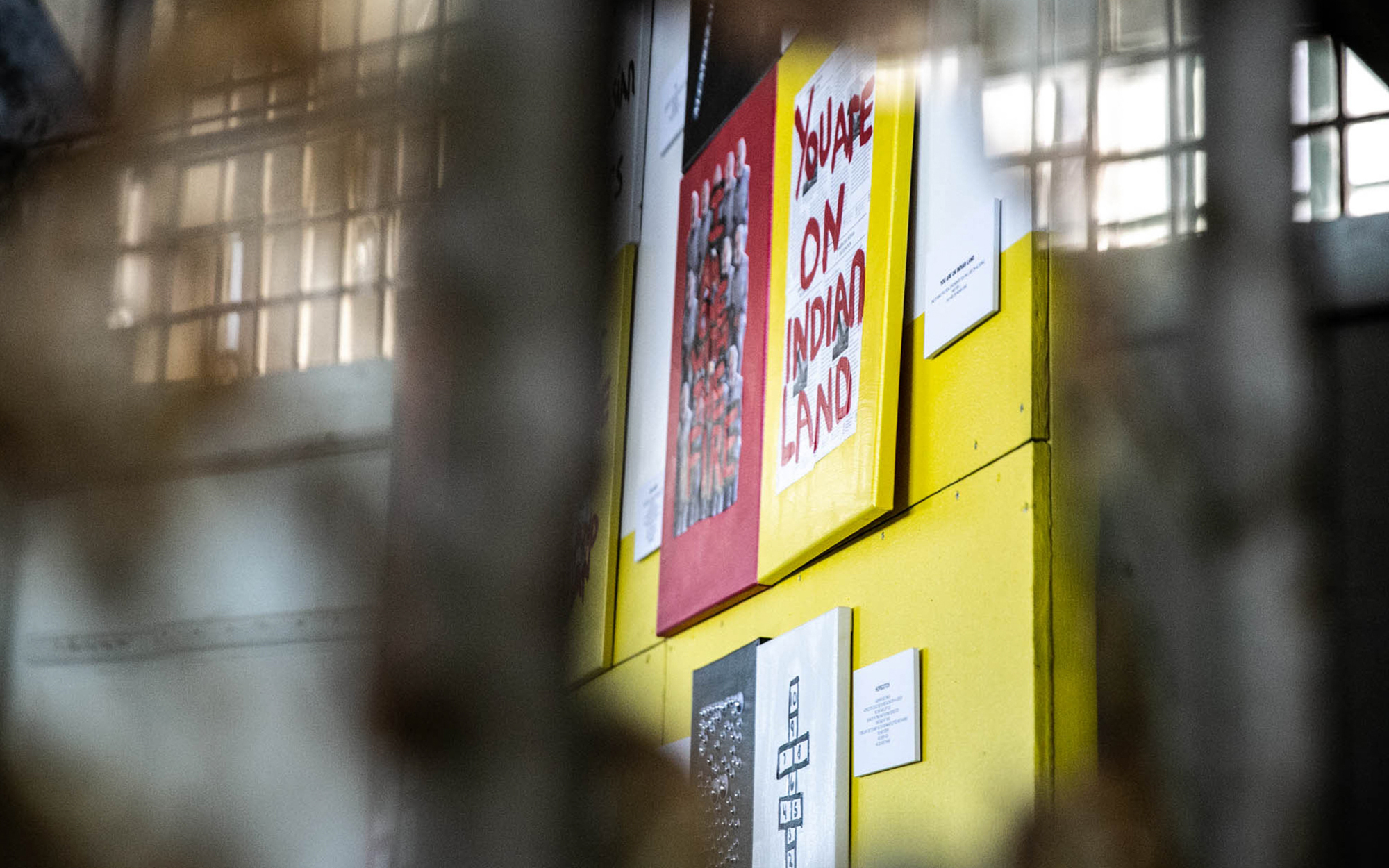 The original occupation lasted from Nov. 20, 1969, to June 11, 1971, when the last remaining activists were removed by federal authorities. (Photo by Grayson Schmidt/Cronkite News)