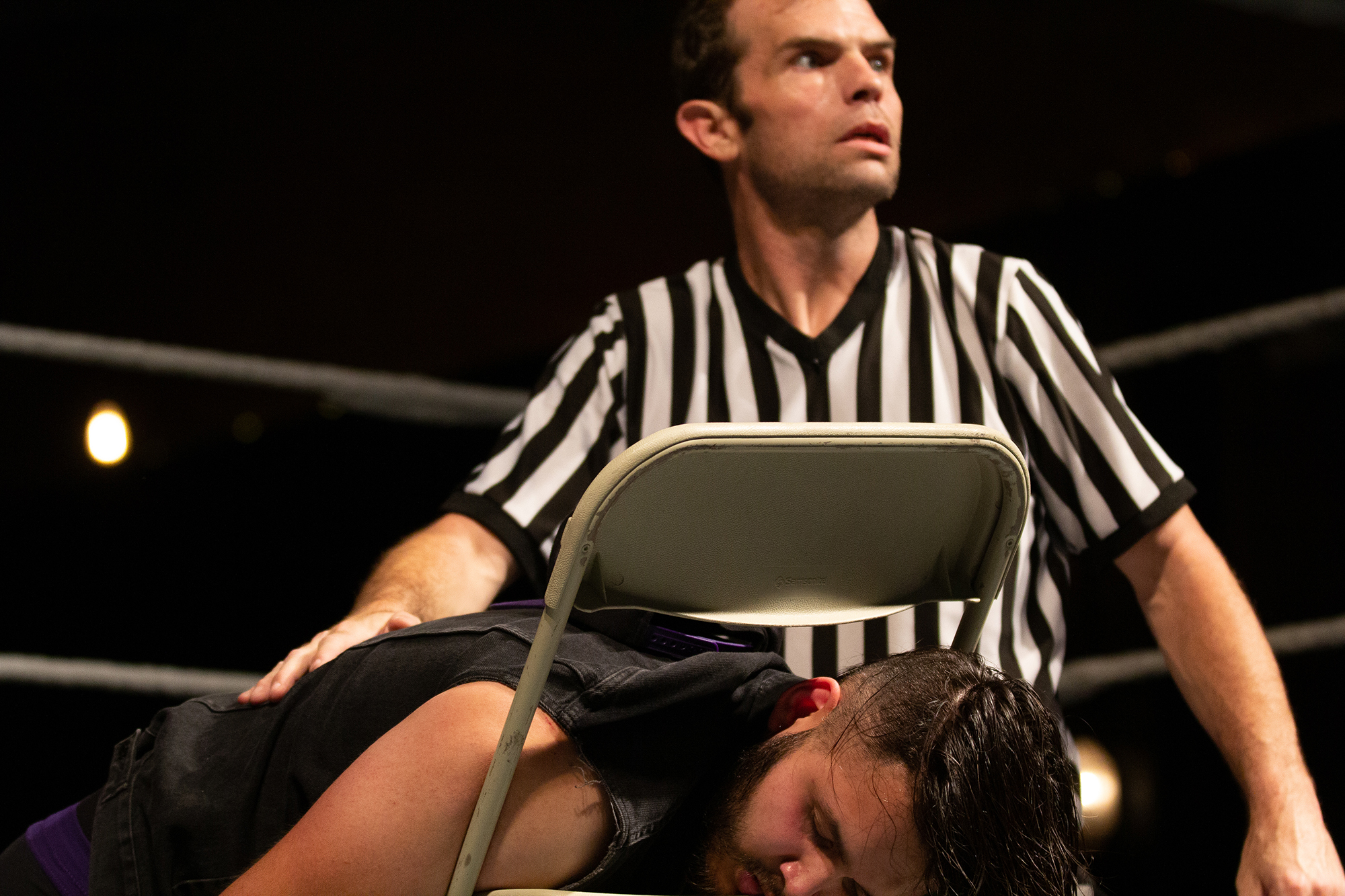 A referee at Mesa’s Party Hard Wrestling looks aghast after a theatrical betrayal of wrestler LJ Ramos during “Nothing But Trouble” on November 15. “We see wrestling as everything from your death matches to your comedy,” owner Brandon Reichard said. “That’s kind of what we have here at Party Hard.” (Photo by Tyler Dunn/Cronkite News)

MESA — Hidden along a pleasant stretch of downtown Mesa, tucked between a sleepy vegan cafe and a local art gallery, you’ll find the Nile. Nearing its centennial, the converted movie theater now operates primarily as a music venue.

But eight days a year, about 250 rowdy Arizonans line up at its back alley entrance for a night of Party Hard Wrestling.

Once inside, fans of the independent wrestling promotion are treated to things not seen on WWE. Free-for-alls inside the ring and melees outside it, just feet from the first row, if not on top of it. Voodoo dolls and crossgender brawls, matches with tacks and White Claws.

The wrestlers at Party Hard stretch the bounds of conventional character tropes. There’s Funny Bone, who dresses in skeleton paint and calls himself the Demi-God of Death, and R-Three, the very strong and very silent type. There’s Ray Basura, Trash King, always with his grimy subjects close in tow. And of course, Cereal Man, the fan favorite whose finishing move involves grabbing a handful of Cap’n Crunch from the cereal box mask atop his head. 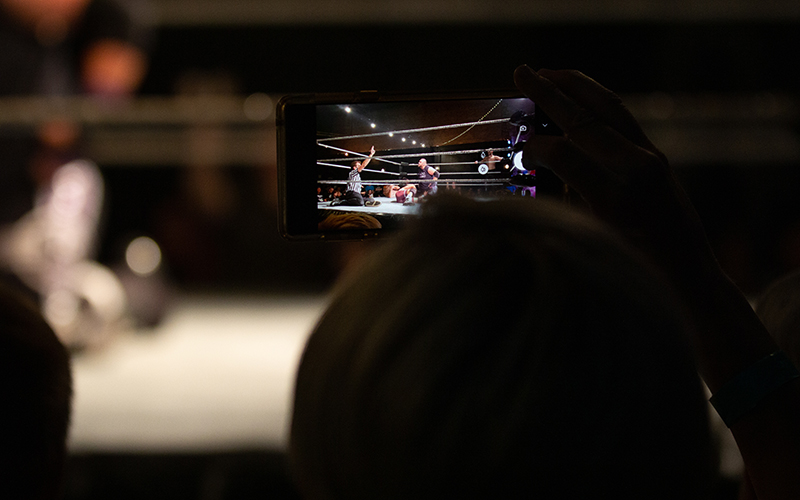 When Party Hard Wrestling came to Mesa, the company struggled to fill 30 chairs on a given night. Now, fans Michael and Bethany Castle say, they have been to multiple Party Hard Wrestling shows that filled Mesa's Nile theater to capacity. (Photo by Tyler Dunn/Cronkite News) 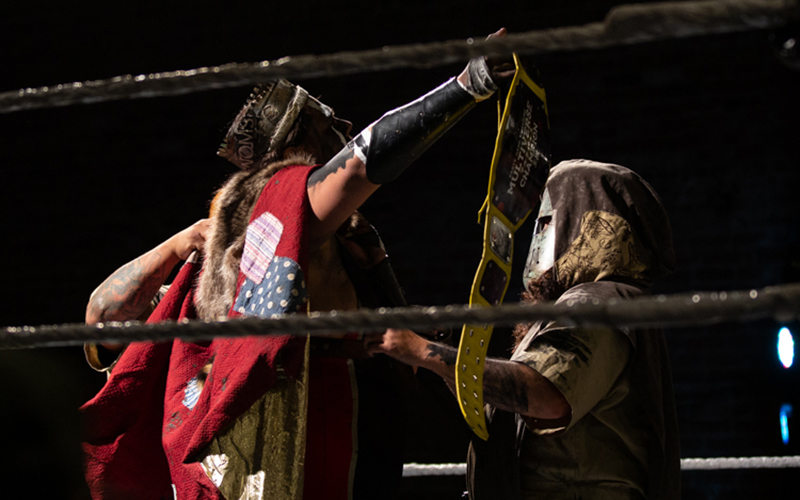 They fight in their own punk rock-tinted world they call the Multiverse, and they dream of taking home Golden Fanny Packs and Chairizona State Championships.

If you haven’t been to a wrestling show before, all the chaos could be a shock to the system. But Charles Pelayo, who dons a black hoodie and mask as R-Three, calls it the perfect introduction to independent wrestling.

“If there’s a show for you to try out, it would have to be that one,” said Pelayo, who, like many of Party Hard’s wrestlers, performs at venues across the Southwest. “Because that’s kind of like the ultimate experience of independent wrestling and the intimacy that it all brings.”

Michael and Bethany Castle have been coming to Party Hard shows for the past several years, nearly as long as the company has been around. When Michael, a lifelong wrestling fan, moved to Phoenix, he struggled to find the kind of gooc independent wrestling he was accustomed to while living in Kentucky and West Virginia. 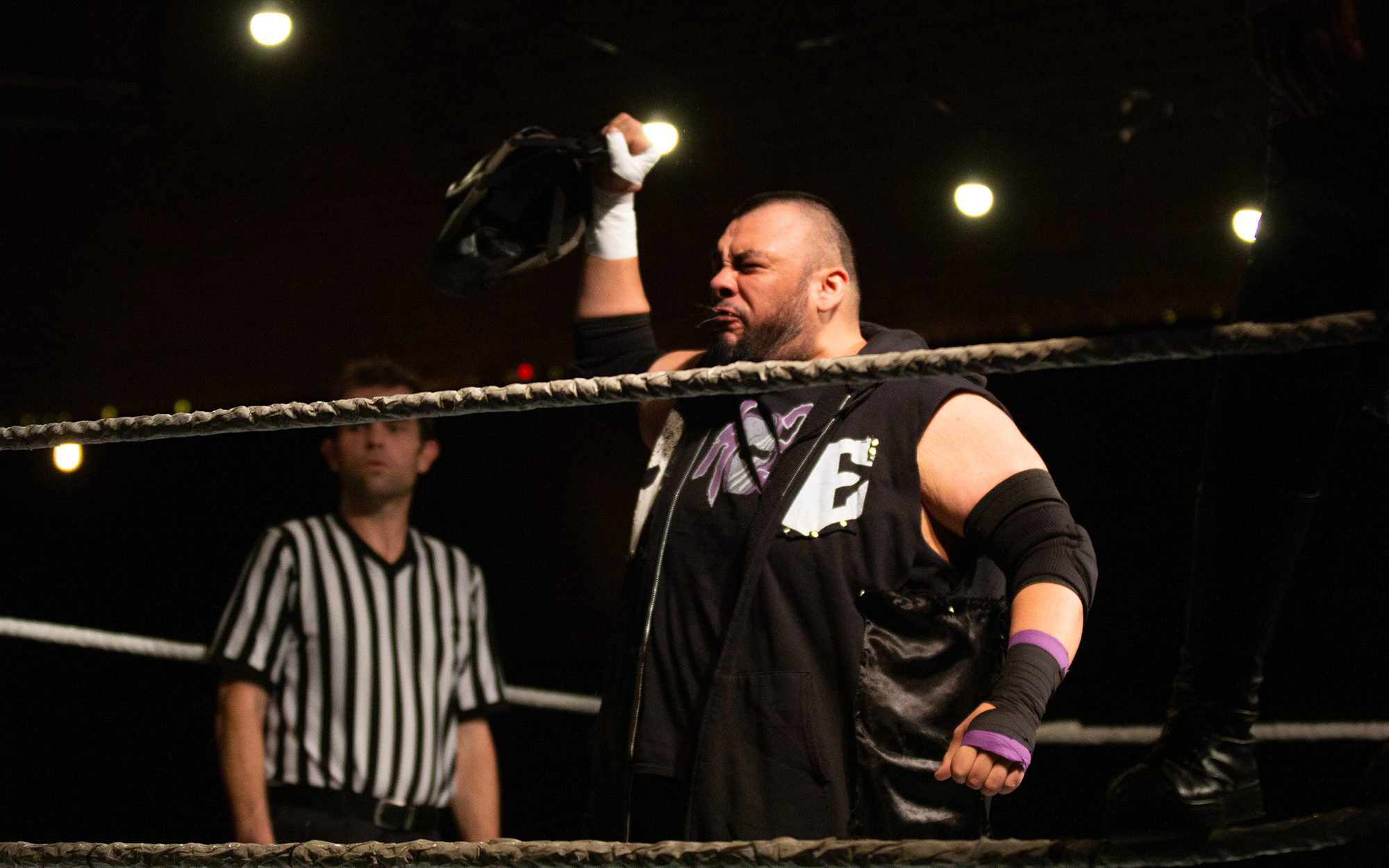 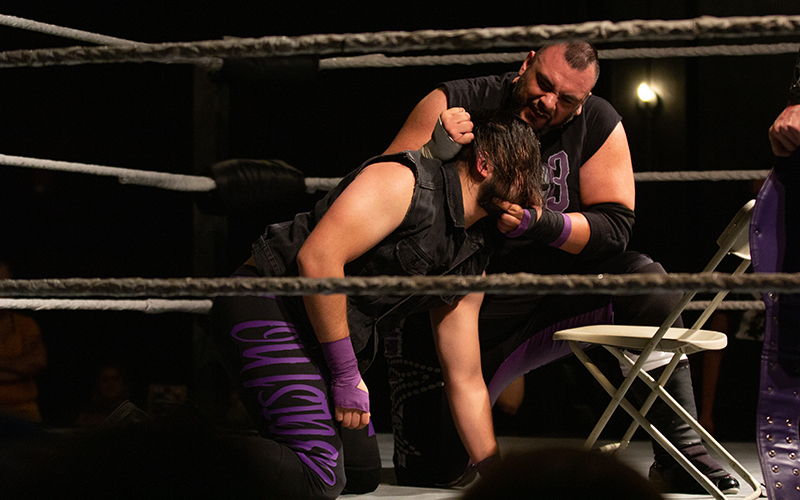 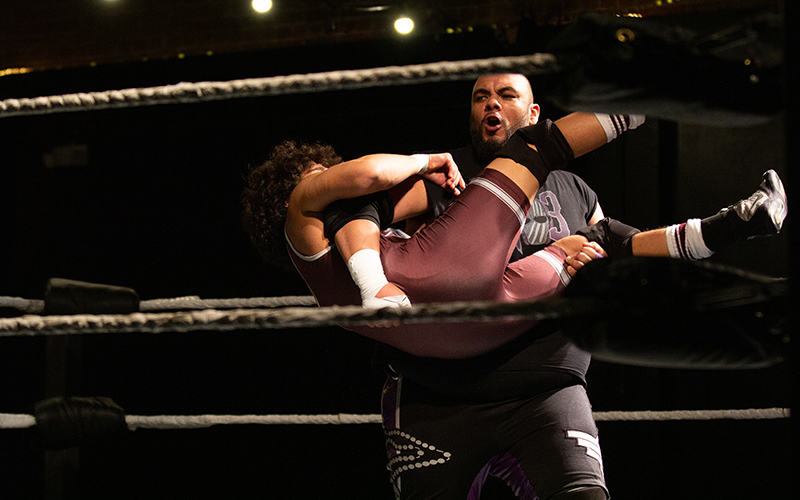 Despite the grueling schedule and bodily toll of wrestling, Charles Pelayo intends to stay in the ring as long as he's able. In December, he and partner Evan Daniels will defend their tag-team title against the Bayside Besties. (Photo by Tyler Dunn/Cronkite News)

It didn’t take long for the Castles to feel at home.

“Party Hard’s atmosphere, the fan experience, the interaction – it’s just so different than anywhere else,” Michael said. “It’s not just a wrestling show. It’s really like a party.”

Now in its fourth season, Party Hard Wrestling is the brainchild of Brandon Reichard. Much like the Nile, which has operated as a clothing store, a nightclub, a church and plenty more, Reichard, 33, has lived a few lives.

He left Tennessee in 2005 to join the Navy. A fan of hardcore in high school, Reichard gave his vocal cords a break and picked up folk music, taking on the musical persona Russell. It was also during his six-year stint in the Navy that he met, married and, ultimately, divorced his first wife.

“The music that I was making during that time was very personal,” Reichard recalled. “I was telling a lot of stories about love, but in a very weird way.” 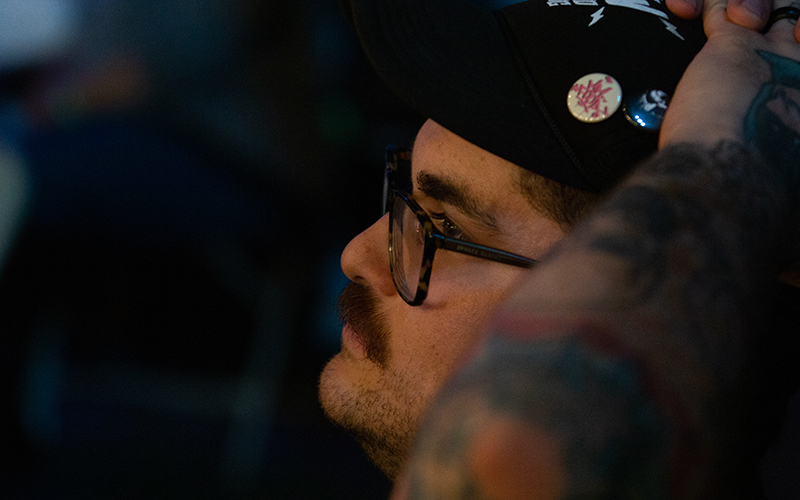 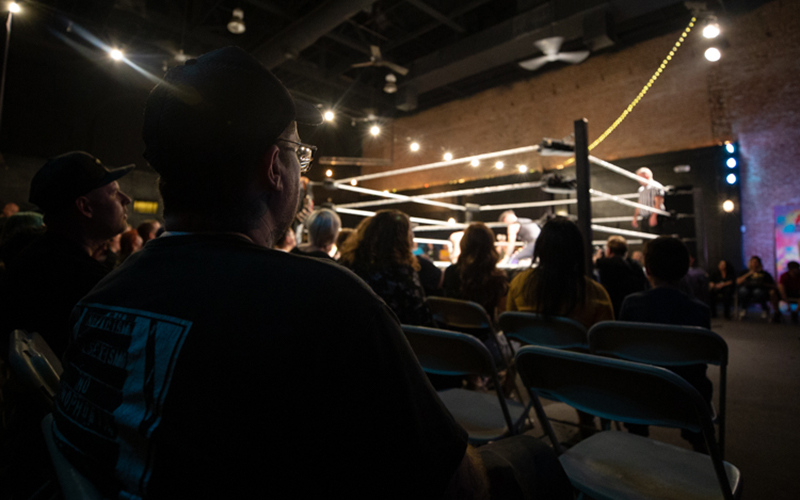 If there’s one thing to know about Reichard, though, it’s that he doesn’t stay still. So he enrolled in the Art Institute of Tennessee-Nashville, where he discovered advertising.

“I was always that kid who remembered commercials and marketing campaigns but I never knew what it was I loved about it,” Reichard said. “A whole new world opened up to me.”

Fast forward a bit and Reichard took off down the dusty road to Mesa, where he had landed his first advertising job.

In those first days in a state he didn’t know, Reichard found yet another way to express himself creatively – toymaking. And it was a chance, toy-related meeting at an event downtown, Reichard said, that really set Party Hard Wrestling into motion.

“A couple of my toys I’d used wrestling pieces – like I’d used noticeable parts of different wrestling figures – and they caught it,” Reichard remembered. “I was like ‘You’re wrestling fans? We need to be best friends and talk forever.'”

Stefan Moore remembers that moment, too.

“I was wearing a Jake ‘the Snake’ shirt,” he said, referring to pro wrestler Jake Roberts.

Soon Reichard and the Moores had their own podcast, aptly titled “The Pizza and Wrestling Podcast.” Through that, they made inroads with local wrestlers and the owners of the Nile. It didn’t take long to connect the dots, though for Reichard, it had been years in the making.

“Taking everything from the podcast, to the hip-hop to the folk music, to the improv music, to the military, to the marketing background,” Reichard said. “It’s all come together to create this chaotic, beautiful thing that is Party Hard Wrestling.”

Alex Salyers, who wrestles under the pseudonym the “Man in Black,” has been with the company from those early days.

“That guy represents every gear that turns, every minute of the show,” Salyers said. “You can’t turn your back on him or you’ll lose him. 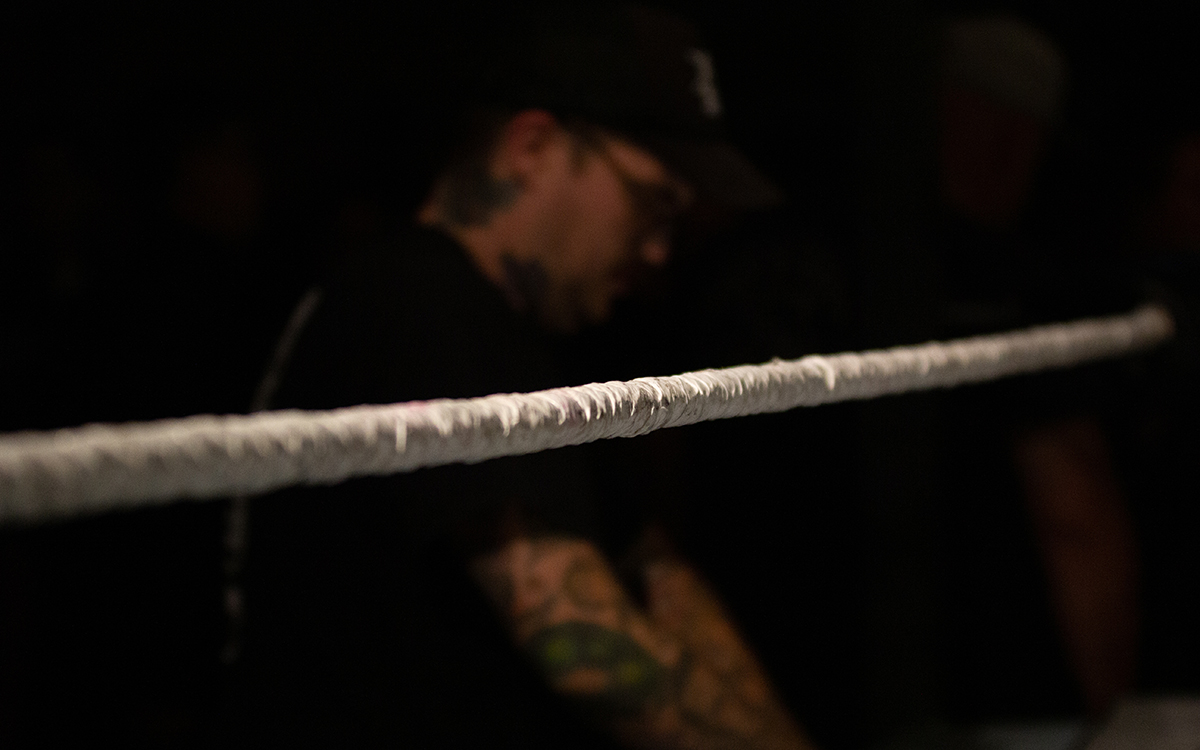 “(Reichard) is a guy who has a vision, he sticks to his guns on that vision,” Salyers said. “He picks the right body, the right character, the right voice and puts them in the specific spot that he thinks will really turn the wheels of those stories to get to where he wants to go, just like any producer or director of a movie.”

“It’s never the same ones repeated,” said Murray, who also is one of Party Hard’s lead photographers. “Not like ‘Oh, he stole my girl or whatnot’ — the same ones you see all the time.”

Be it music, advertising or even the details he incorporated within his toymaking, Reichard is aware of his common attraction to storytelling. And he knows that’s where he connects with wrestling, too.

Reichard said he often pulls ideas from pop culture, and sometimes, from his own life.

“That story structure very much taps into things that I’m even currently dealing with,” he said. “Things with mental health and relationships and everything that I’ve gone through.” 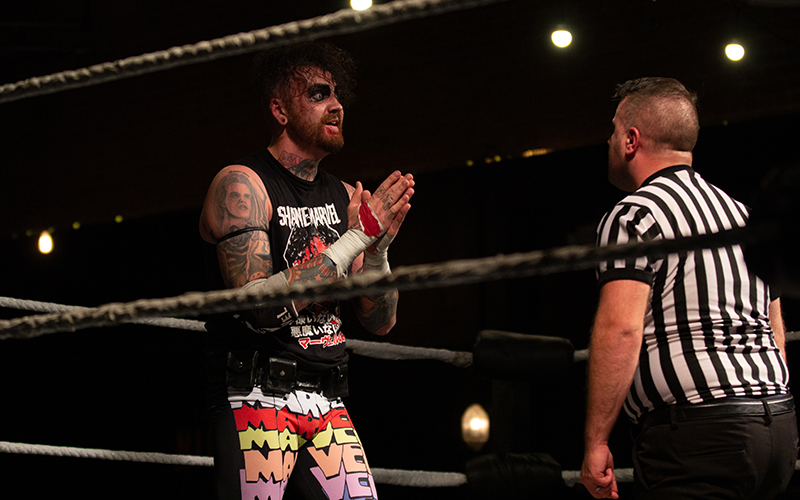 Shane Marvel has been part of Party Hard Wrestling since the promotion premiered in 2016. Marvel brought his superhero character to the desert from his previous gig at New England wrestling company Limitless Wrestling. (Photo by Tyler Dunn/Cronkite News) 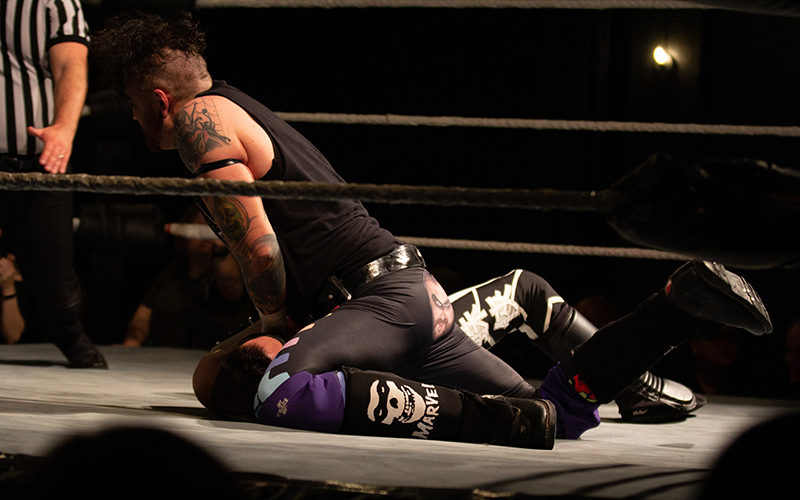 Reichard tells a story about a wrestling arc from Party Hard’s first season. Shane Marvel, one of the show’s original fan favorites, came to the aid of a friend in the ring, only to be beaten to death with a crowbar.

As Reichard and his coworkers prepared for Season 2, a video appeared on Party Hard’s Facebook page. A mysterious cult had resurrected Marvel — with a catch. A suddenly evil, half-dead Shane Marvel showed up for the second season two and has been terrorizing opponents ever since.

“He only resembles the man we used to know, the hero who we used to know,” Reichard said. “There’s some relatability in being beaten down and having to lick your wounds and coming back more abrasive than you were previously.”

Wrestling is for everyone

Reichard said he doesn’t really listen to his old music anymore, but some lyrics still ring true for him.

Such as the hook from one of Reichard’s raps: “I’m not obsessed with the average portrait of success. I don’t want to be famous, I just want to suck less.”

Reichard would be the first to tell you, probably quite colorfully, that Party Hard Wrestling isn’t a road to fame or fortune. But he’s channeled his creative energy into something unique, something that definitely doesn’t suck. 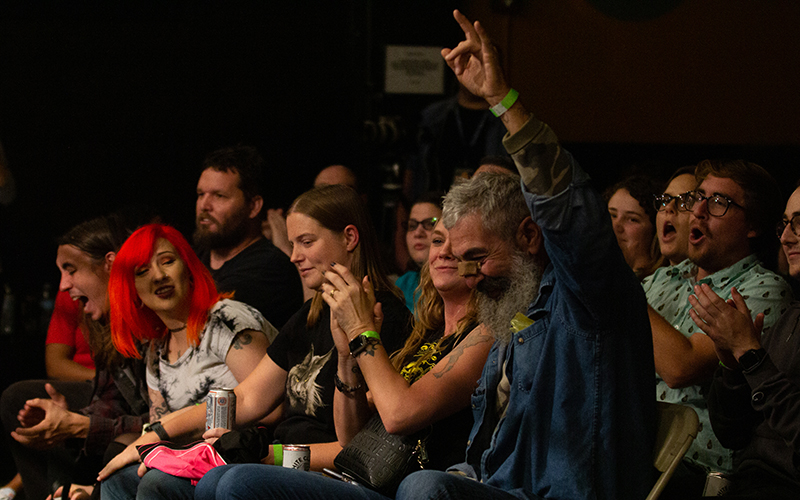 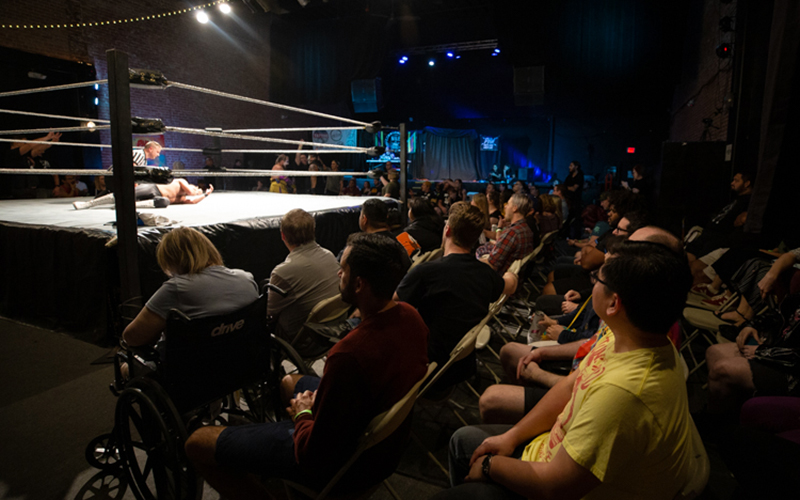 After starting off the way it did – a podcast-turned-promotion that struggled to entertain more than a smattering of fans each month – Party Hard Wrestling is now one of the largest wrestling companies in Arizona.

There are definitely other successful wrestling operations in Arizona. Championship Wrestling from Arizona broadcasts a weekly TV show from the Nile, and Arizona Wrestling Federation has entertained thousands of fans across the Valley since 2013. But, as Pelayo puts it, Party Hard just “has its own flavor.”

“There’s guys who have strange characters that are not traditional pro wrestling, but you go to a show and you enjoy it,” Pelayo said. “It’s like a Vegas show.”

On Friday night, Party Hard’s theatrics will take a turn for the festive. The December show, “PHW Holiday Specialer,” should feature plenty of Christmas-themed carnage, including a bout that’s become a bit of an annual tradition: the Tinsel Town Street Fight. Pelayo, who fought Shane Marvel at last year’s holiday production, hinted they’ll bust out the tinsel again this season.

Mister Classic, behind, fought through Fidel Bravo and two other wrestlers in a fatal four-way to win the Golden Fanny Pack in November. (Photo by Tyler Dunn/Cronkite News)

Allie Kat has traveled around the country competing on the wrestling circuit, including a match in November at Party Hard Wrestling. She often finds a way to bring her favorite prop, White Claw hard seltzer, into her matches. (Photo by Sarah Farrell/Cronkite News)

Happy, who's half of the tag team Happy Monster, will compete in a fatal four-way at the “Holiday Specialer” show on Friday, Dec. 6. (Photo by Tyler Dunn/Cronkite News)

Shane Marvel was victorious in his match against Spyder at Party Hard Wrestling’s “Nothing But Trouble” show. Spyder has wrestled in events around the country and as far away as China. (Photo by Tyler Dunn/Cronkite News)

The Uninvited are a wrestling tag team at Party Hard Wrestling. They have had various members throughout the shows. For the November show, the team consisted of, from left, Evan Daniels, R-Three and LJ Ramos. (Photo by Sarah Farrell/Cronkite News)

As with every show, Party Hard has promoted “Holiday Specialer” on Facebook with a stream of hashtags, including #alternative, #phwandchill and – most notably – #wrestlingisforeveryone.

“We’re here for the people who are out of touch with wrestling, we’re here for the people who have only been exposed to WWE in the past,” Reichard said before last month’s show, taking a pause as fans filled the alley behind the Nile. “We exist because people want to go see live wrestling, they want to hang out with their friends, they want to grab a beer and have a laugh and a cheer and a boo.”