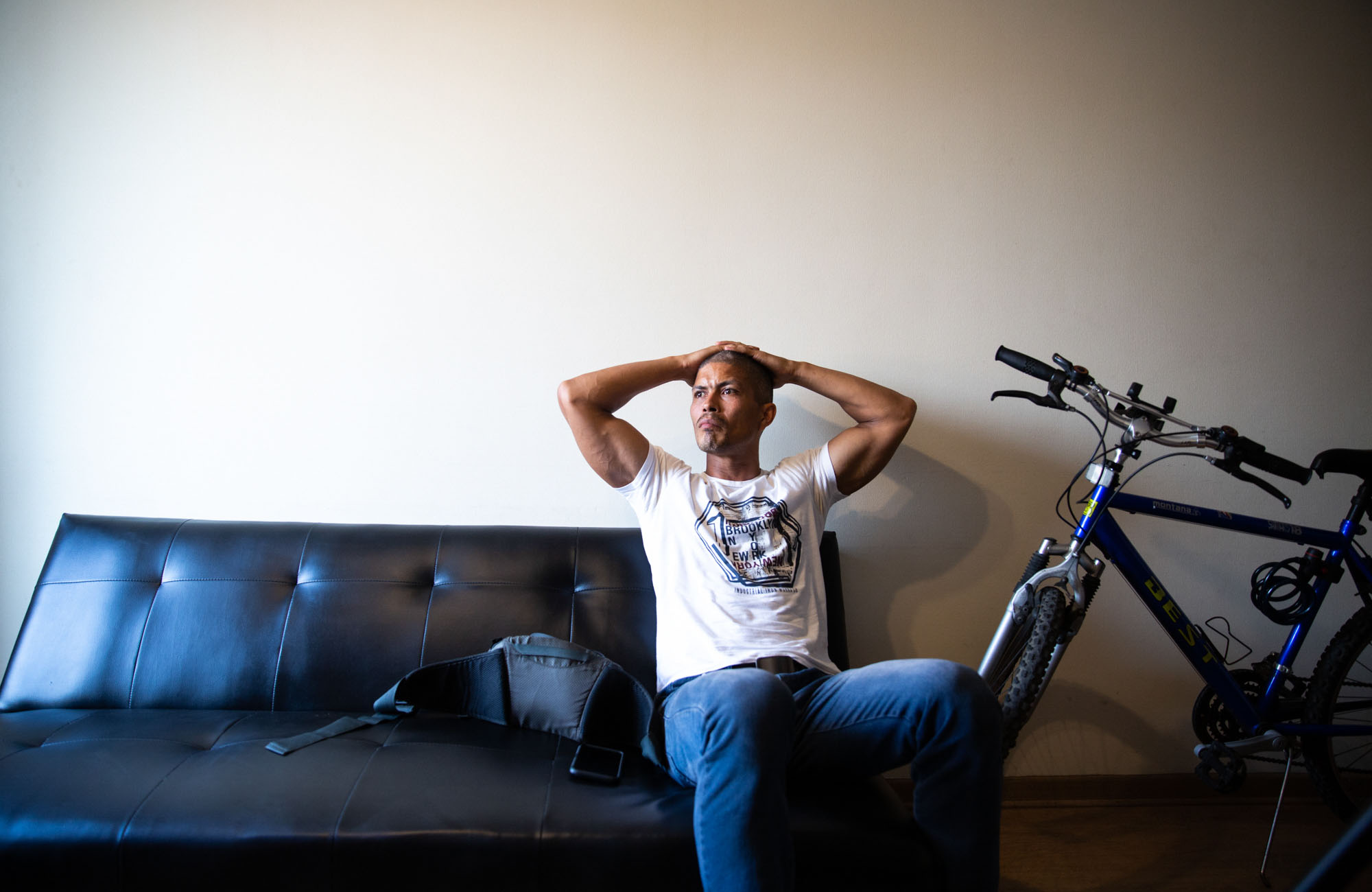 Jaime Parra, who was a gynecologist in Venezuela before coming to Peru last year, works as a nutritional adviser at a gym while tries to get his degree recognized in Peru. (Photo by Anya Magnuson/Cronkite Borderlands Project)

By Harrison Mantas/Cronkite Borderlands Project | May 9, 2019

LIMA, Peru – Venezuela’s “brain drain” could have benefits for Peru, which has absorbed more than 700,000 Venezuelan immigrants over the past three years and suffers a serious shortage of medical professionals.

But difficulties navigating the recredentialing process have prevented many Venezuelan doctors from using their skills in their new home.

Dr. Jaime Parra, 37, was a gynecologist in Venezuela who had both public and private practices, and worked as an instructor at the medical college at the University of Carabobo.

“My life wasn’t opulent. I use to have a lot of work to live more or less in a good standard,” said Parra, who was among the throng fleeing Venezuela’s economic, social, and political decline.

He applied that same work ethic when he arrived in Lima 10 months ago, selling chicha morada (a Peruvian soft drink) and hot chocolate on the streets.

Parra has a temporary residency permit that, until it was discontinued last November, allowed 495,000 Venezuelans to work legally in Peru. Parra has since moved on from street selling, but the one job he really wants, medical doctor, remains out of reach.

Venezuelan professionals have to go through a three-step process to get licensed in Peru. Step 1 is receiving the temporary residency permit, commonly referred to as a PTP. Step 2 involves getting your degree recognized by the SUNEDU, a government agency that verifies foreign credentials. Those who were certified as Integral Community Doctors in Venezuela must take additional education to meet Peruvian standards. Step 3 is to pass the credentialing exam at the corresponding professional college, in this case the Colegio Médico del Perú.

Parra is stuck on Step 2. 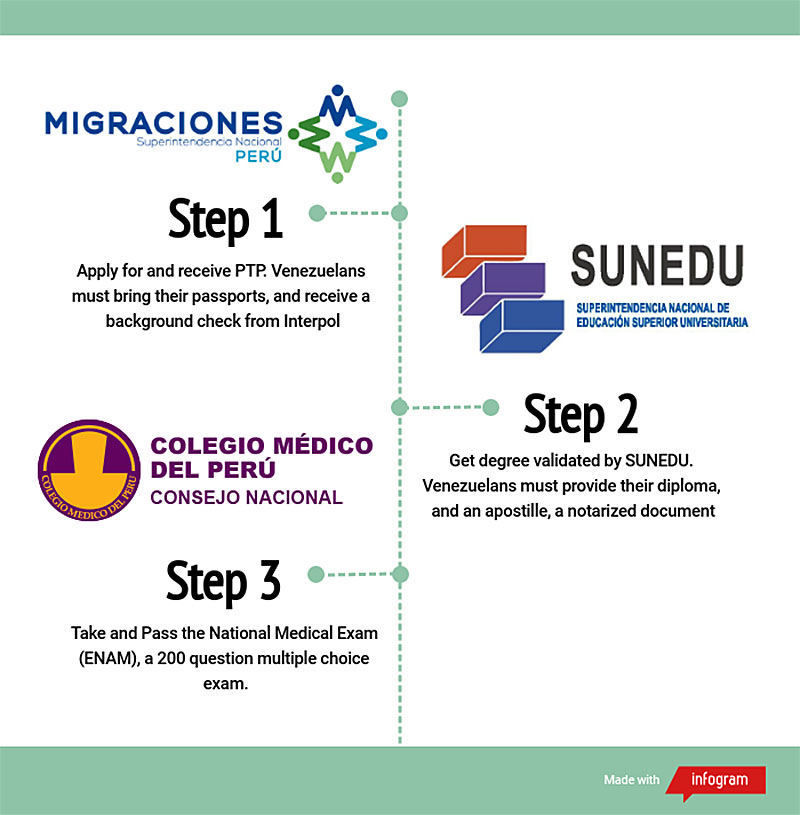 To verify his degree, he needs an apostille, a notarized certificate of authenticity from his medical school in Venezuela. Unfortunately for Parra, that would involve either mailing his degree back to Venezuela or returning in person to get it notarized, which would take time and money. Parra and other doctors said they often have to pay bribes to obtain necessary paperwork. For now, Parra gets by working as a nutrition consultant at a gym.

“I’m not afraid of working, OK? But it’s a little bit frustrating (when) you cannot work everything you got prepared for,” Parra said. 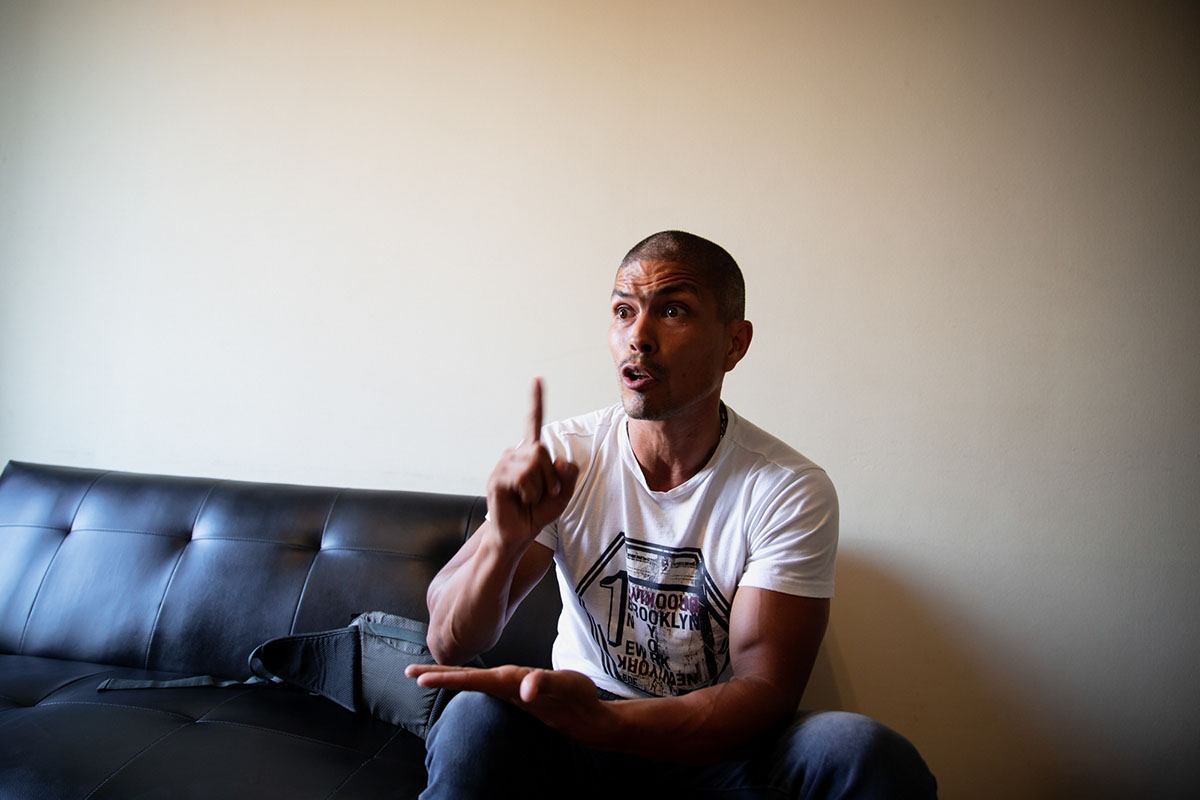 About 700,000 Venezuelans have resettled in Peru since 2015, according to U.S. State Department and Peruvian officials. For the most part, Peru has welcomed the Venezuelans, and the country of 32 million could use the skills of expat doctors, nurses and other medical professionals.

A 2018 report from the Peruvian Ministry of Health found that Peru faces a deficit of 16,630 medical specialists and 6,000 general practitioners. Additionally, many doctors trained in Peru often take jobs in foreign countries, further depleting the national workforce.

As in the United States, medical resources in Peru are more concentrated in cities, while rural areas struggle. Peru requires all doctors wishing to practice in the public sector to spend a year in the Rural and Urban Marginal Health Service, or SERUM, which sends doctors to underserved communities, but recent controversies over participant safety and calls from the Medical College to end the program have called it into question

Unión Venezolana en Perú, a non-governmental organization supporting Venezuelan migrants in the country, wants to be part of the solution. Its leaders cite statistics that show roughly 430,000 of the Venezuelans in Peru have some form of professional education. Under a program they are spearheading called Asimilación Productivo, or Productive Assimilation, the union would coordinate with the government to relocate these professionals to regions where the need is greatest. 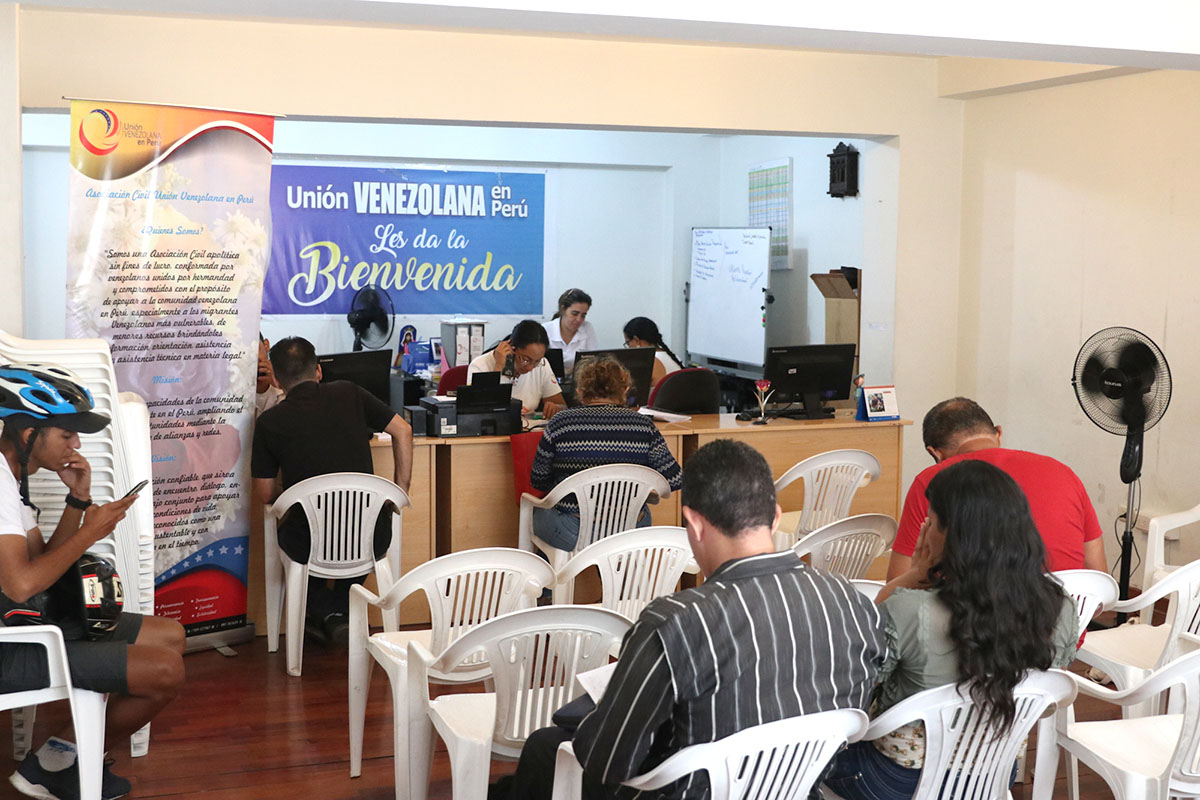 The Unión Venezolana en Perú has been a defacto embassy for Venezuelans, helping migrants with everything from work permits to enrolling children in school to counseling services. (Photo by Paulina Verbera/Cronkite Borderlands Project)

Nancy Arellano, the program’s coordinator, said it was born of a response to a growing anti-immigrant sentiment in Lima, Peru’s capital. Arellano hopes to show that Venezuelans are not a burden and can contribute to Peruvian society.

An estimated 85% of the Venezuelan migrant population lives in and around Lima. So far, the union has registered 30,000 professionals, 81% of whom have expressed interest in relocating outside Lima.

Editors: An earlier version of this story misspelled the names of Dr. Jaime Parra and the University of Carabobo. The story has been corrected, but clients who used the original version are asked to run the correction found here.

The union also has worked with SUNEDU to reduce the cost of revalidating credentials to $100 from roughly $200.

Arellano points out that roughly 70 percent of Peru’s economy is informal, meaning workers get paid in cash and usually pay no taxes. She argues that bringing these professionals into the fold will increase Peru’s tax base and reduce competition for low skilled work.

Dr. Jose Borregales Contreras is ready to help his new country. The 62-year-old obstetrician and gynecologist left Venezuela when it became difficult to find medication for his diabetes. He came to Lima to live with his two adult sons but sees his future outside the capital.

“The problem is that the concentration of people is always in Lima but the provinces are deprived. We Venezuelans want to go to the provinces to cover the deficit,” Borregales said.

Borregales has had his degree validated but hasn’t gotten a license less. Last February, only seven of the 127 doctors who took the medical college’s licensing exam passed; he was one of the 120 who did not.

Borregales survives with support from his sons and by performing ultrasounds for a handful of Venezuelan patients. He says he earns about $600 a month but could make three times that much if he were licensed. 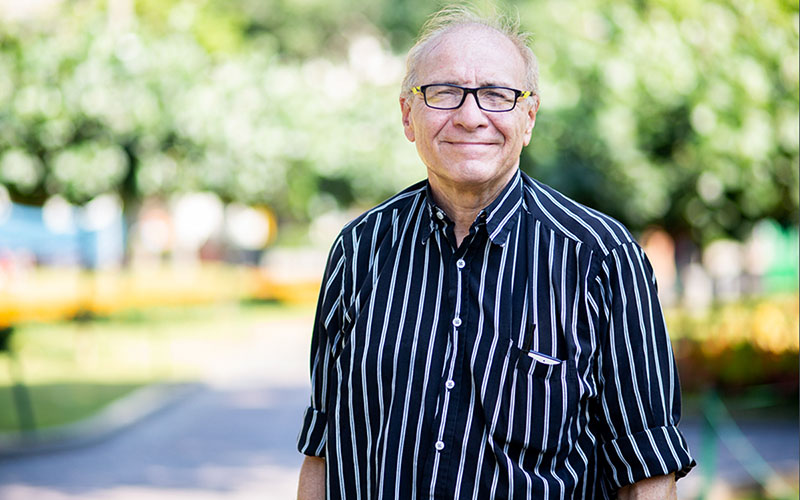 Dr. Jose Ramon Borregales lives in Lima with his sons, but he says he would be willing to relocate to other parts of Peru to practice medicine. (Photo by Anya Magnuson/Cronkite Borderlands Project) 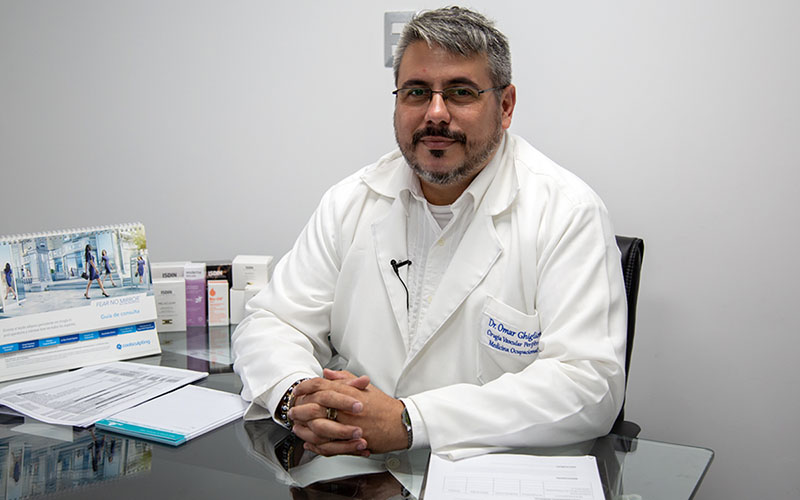 Drs. Heydi Coronel and Omar Ghighlione had everything planned out. Before leaving Venezuela, the husband and wife duo meticulously researched potential destinations where they could live and practice.

“Europe, it’s very difficult, and the USA is the most difficult country to prevalidate (your) medical titles,” Ghighlione said.

The couple chose Peru because it had the clearest process for recognizing their medical degrees, but even with documents in hand, it took them four months to obtain their medical licenses. While waiting, Ghiglione, a vascular surgeon, sold books door-to-door. Coronel, a fertility specialist and gynecologist, sold candy on the street.

“(I worked) when the weather allowed me because I’m an asthmatic and we arrived in winter, and sometimes the weather was very cruel to me,” Coronel said. Despite the four-month wait, Coronel said they are fortunate their approval went through relatively quickly.

“I have colleagues here in Peru who have been here a year or more and still cannot practice medicine because they have not passed the exam, or they do not have the money for the fees or some combination of factors,” Coronel said. 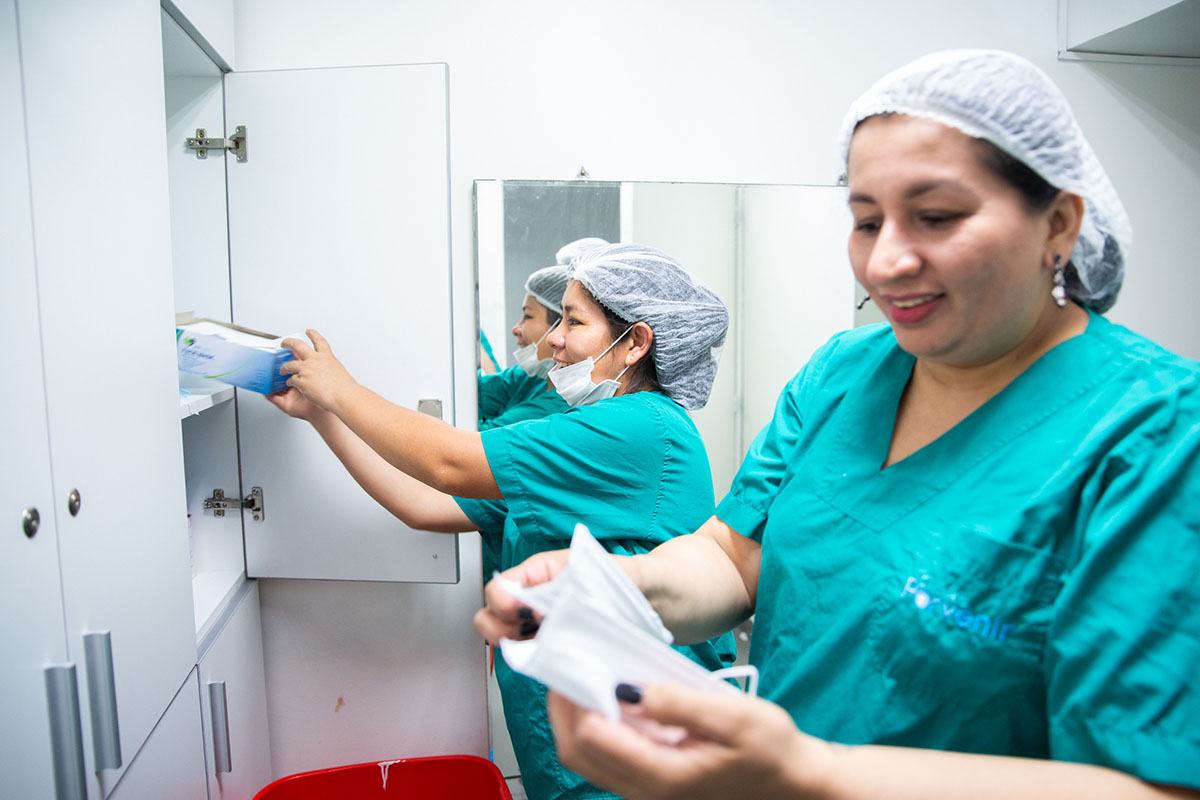 Dr. Heydi Coronel, a gynecologist and fertility specialist in Venezuela, scrubs up before a Cesarean section in the Clínica Porvenir in Lima, Peru. (Photo by Anya Magnuson/Cronkite Borderlands Project)

Ghiglione blames the Venezuelan government for making it difficult for emigrating professionals to get their apostille, alleging the government purposely sets up roadblocks to prevent emigrating professionals. The Venezuelan Foreign Ministry recently rolled out an online portal for Venezuelan expats to process their apostilles, but recent power outages in Venezuela and technical difficulties have hampered the site’s effectiveness.

“Most of these people, professionals all of them, prefer to work in a low station … than work inside the narco-terrorist state of government in Venezuela,” Ghiglione said.

Carlos Scull is the Venezuelan ambassador for the government of opposition leader Juan Guaido, which has yet to wrest power from President Nicolas Maduro. But Peru, along with the United States and other countries, has recognized the Guaidó government as legitimate; Scull officially was recognized by the Peruvian government in late February.

Scull acknowledged that the exodus of professionals is only compounding Venezuela’s problems, but he said his most important job is to advocate for his fellow countrymen in Peru. 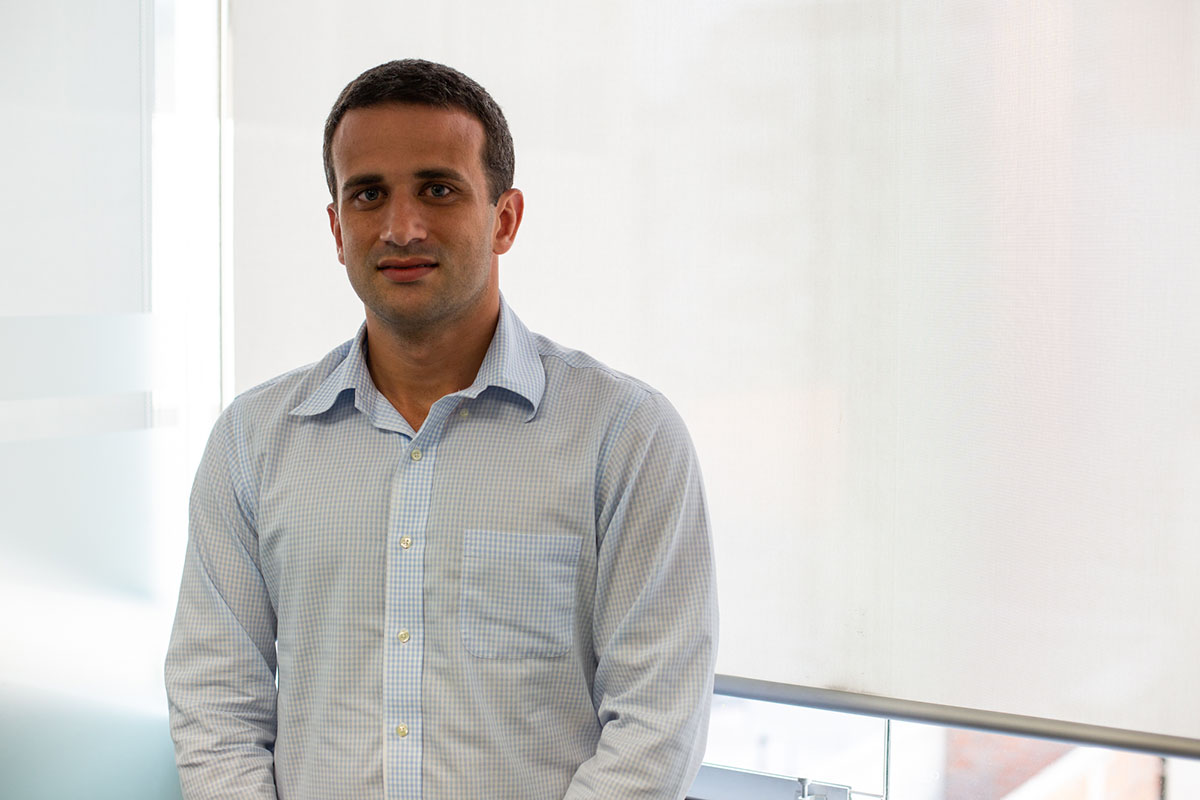 Carlos Scull is the Venezuelan ambassador for the opposition Guido government. He was recognized by Peru in late February and plans to play a large role advocating for the Venezuelan community in Peru. (Photo by Harrison Mantas/Cronkite Borderlands Project)

“We’re losing a lot of … our human capital … but also in a way I think Peru should take advantage of this more, and there are plans to do it,” Scull said. He praised the government in Lima for its help with Venezuelan migrants but acknowledged there’s still work to do.

For the Venezuelan opposition, the most important priority is removing Maduro from power, but it’s not lost on them that they need to rebuild Venezuela in a way that entices professionals to return home.

“That has to be voluntary,” Scull said. “You cannot obligate someone” to return.

For now, Jaime Parra is determined to move forward.

“Hope is the last thing you have to lose in life,” he said. As for his future, the gynecologist sees himself practicing in Peru, and he’d be happy to relocate to do that.

“I just want to, to demonstrate what I know, OK? What I am prepared for.”