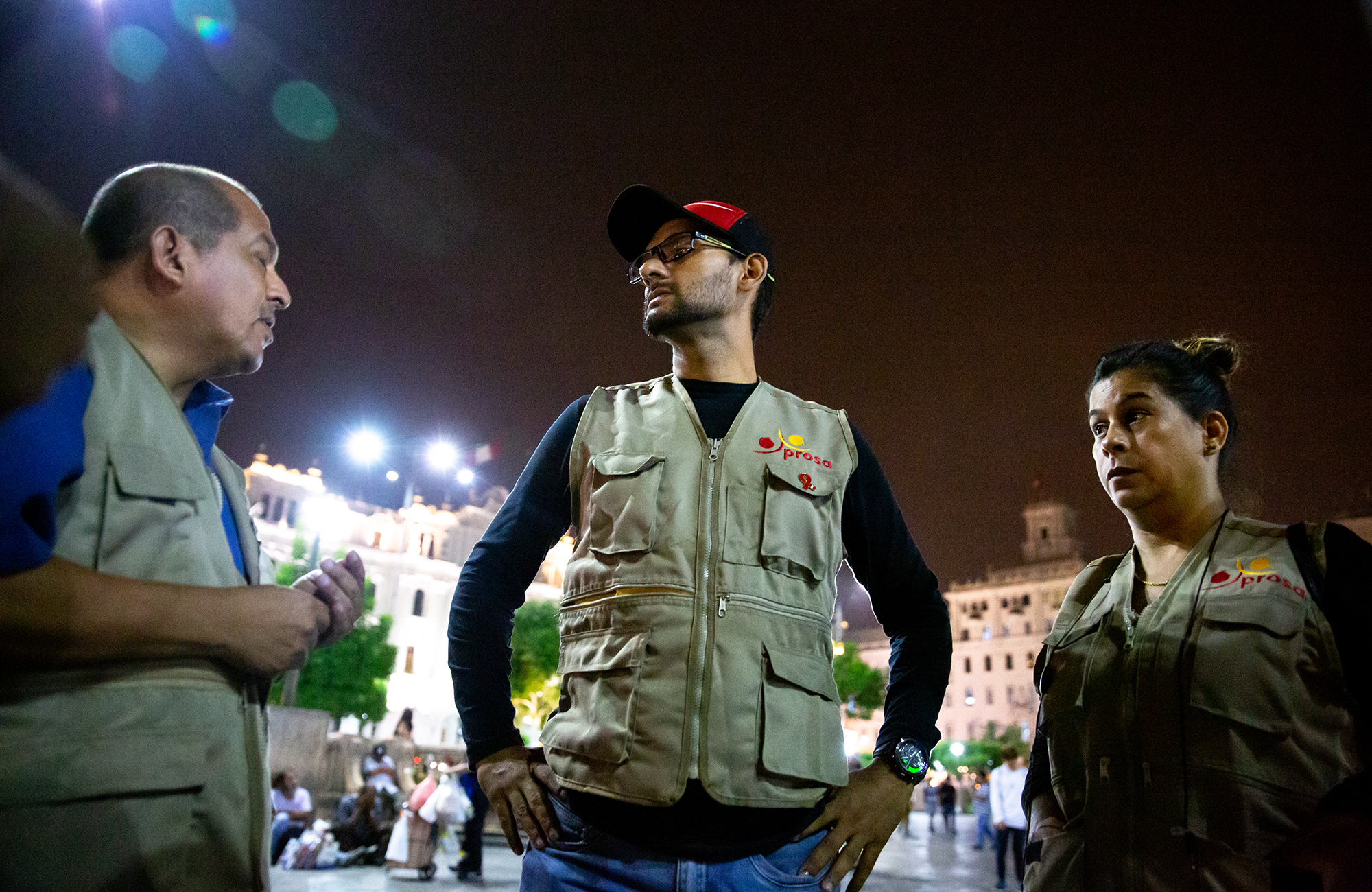 Tourists pack the Plaza de San Martín by day, but prostitutes take over at night. That’s when such volunteers as (from left) Julio César Cruz Requenes, Emmanuel Linares and Sulaida Ramírez Davila work the area to provide information about HIV and safer-sex practices. (Photo by Anya Magnuson/Cronkite Borderlands Project)

By Steph Amaya/Cronkite Borderlands Project | May 6, 2019

LIMA, Peru – Sulaida Ramirez Davila sat in a support group for those with AIDS and HIV, like her son, Rafael Olivares. Tears welled up as she recalled her decision three years ago to leave Venezuela and Olivares.

“I was separated from family … from my son, with the state of health he was in and not being there to help him,” she said.

But leaving has saved the life of her 20-year-old son. In Peru, where Olivares eventually joined her, he has been able to get the antiretroviral medication that’s almost unavailable in Venezuela, an oil-rich country whose economy has been in serious decline for nearly a decade.

The support group was moved by the familiar details: Venezuela’s lack of medicine, people going to hospitals and dying without medical supplies. One by one, group members shared similar stories: of being an LGBT Venezuelan migrant who has contracted the human immunodeficiency virus, which causes AIDS.

The economic and political chaos in Venezuela has hit those in need of medical care particularly hard. In addition to the internal political strife, dropping oil prices and hyperinflation, broad U.S. economic sanctions aimed at the government of President Nicolas Maduro and Venezuela’s national oil company have made food and medicine even more scarce.

This raises a live-or-death decision for people with chronic illnesses: Do I stay and wait to die, or do I flee the country to find medical care?

For Olivares, the answer became gradually and urgently clear.

In Venezuela, he would receive antiretroviral medication one month and limited medication the next. Then he was given expired medication that was ineffective. Finally, he received no medicine at all. 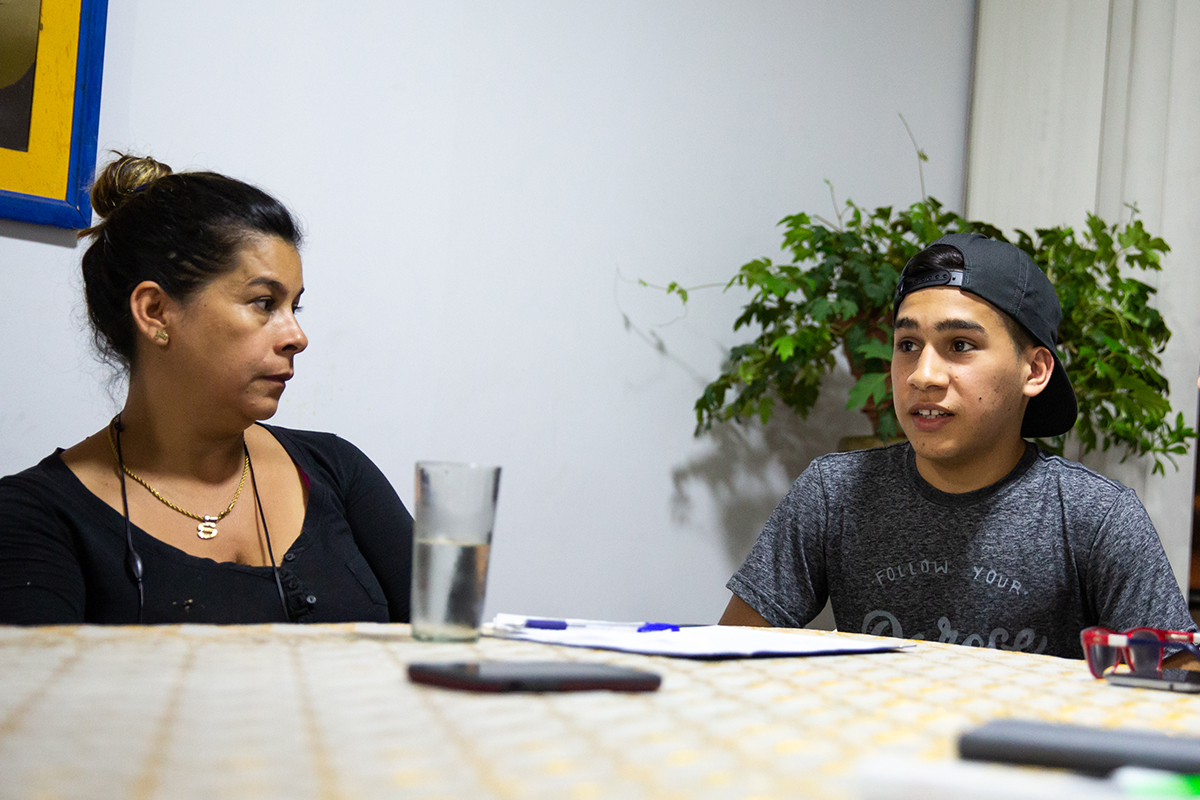 Sulaida Ramírez Davila listens as her son, Rafael Olivares, 20, speaks about why he left Venezuela and came to Peru during a PROSA meeting in early March. (Photo by Anya Magnuson/Cronkite Borderlands Project)

Antiretrovirals were developed in the years following the AIDS crisis during the 1980s, according to the National Institute of Allergy and Infectious Diseases. At the time, the average life expectancy of someone diagnosed with AIDS was about a year. Now, with proper and consistent cocktail of antiretrovirals, people can live near average lifespans while managing their disease.

The lack of medication has led to many people living with HIV in Venezuela to use home remedies, such as consuming bay cedar, a plant that has not been conclusively proven to treat HIV. Before migrating to Peru, Olivares resorted to home remedies as well.

“For a year and a half, I was taking home remedies, and thankfully it helped to some extent but I was terrified of living the rest of my life without the proper medication and what would happen to me if I didn’t have access to it again,” Olivares said.

After his mother moved first to neighboring Colombia and eventually to Lima, Olivares was left to deal with his illness mostly on his own. He lived with relatives, hiding his illness and his urgent need for treatment. After three years, his relatives found out he’s HIV positive and kicked him out.

Ramirez wasn’t aware of the situation until her son called in late April from the airport in Lima, with nowhere else to go.

“It felt horrible because it was like my family was turning their back on me and my son, and that we’re alone in this world,” she said.

The support group is hosted by the Programa de Soporte a la Autoayuda de Personas Seropositivas (PROSA), a non-governmental organization that focuses on providing health care resources, as well as legal and social support for HIV positive Peruvians and migrants alike. The director of PROSA, Julio Cesar Cruz, works closely with other organizations, including the United Nations High Commissioner for Refugees, to locate migrants and refugees who are HIV positive.

To many HIV positive migrants, legal residency in Peru, through a Permiso Temporal de Permanencia (temporary residence permit) or a Carnet de Extranjería (legal residency card), means survival. Not only can they can begin to build a life in Peru, they will receive antiretroviral medication for free through the Peruvian health care system. PROSA acts like a bridge for lower-income people as well as migrants.

Once in Peru, Olivares applied for a Carnet de Extranjería, and with the help of PROSA, his processing time was shortened because of his HIV status.

Cruz said is a critical part of what PROSA stands for, because the sooner people have access to antiretroviral medication, the better their chances of survival. 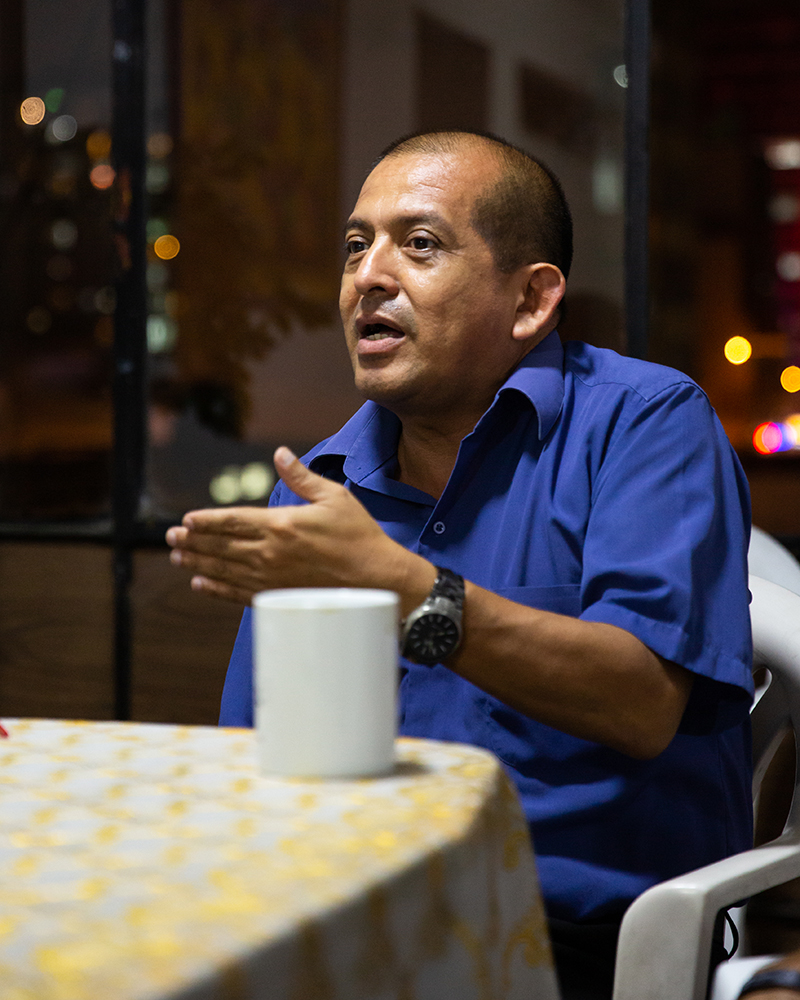 “We’ve had about 13 migrants from Venezuela die in hospitals once they make it to Peru,” he said. “They die because they’re coming here seriously ill because of how much time they’ve had to go without antiretrovirals while in Venezuela. Sometimes help comes too late.”

In some instances, Cruz said, these deaths are due to the fact that many migrants aren’t aware of the necessary steps they must take or the resources available for them to access free medicine.

Dr. Luis Alberto Fuentes Tafur is among the experts who say the Peruvian health care system is ill-equipped to handle the flood of Venezuelan migrants and needs more funding and medical personnel.

“However, I will say that the urgency of helping migrants who are HIV positive has given visibility to issues about gender identity and diversity in sexual orientation in Peru,” said Fuentes Tafur, a professor at the Private University of San Juan Bautista in Lima and a medic for the Ministry of Health.

According to UNAIDS, the United Nations agency charged with tracking and combating the disease worldwide, in Peru there is a 15 percent HIV prevalence among men who have sex with men, the highest of any group. But experts say the health and well-being of the LGBT community often is ignored in this religiously conservative country, and discrimination frequently goes unchecked.

At the support group, sitting beside Rameriz and Olivares, was someone fighting that battle. 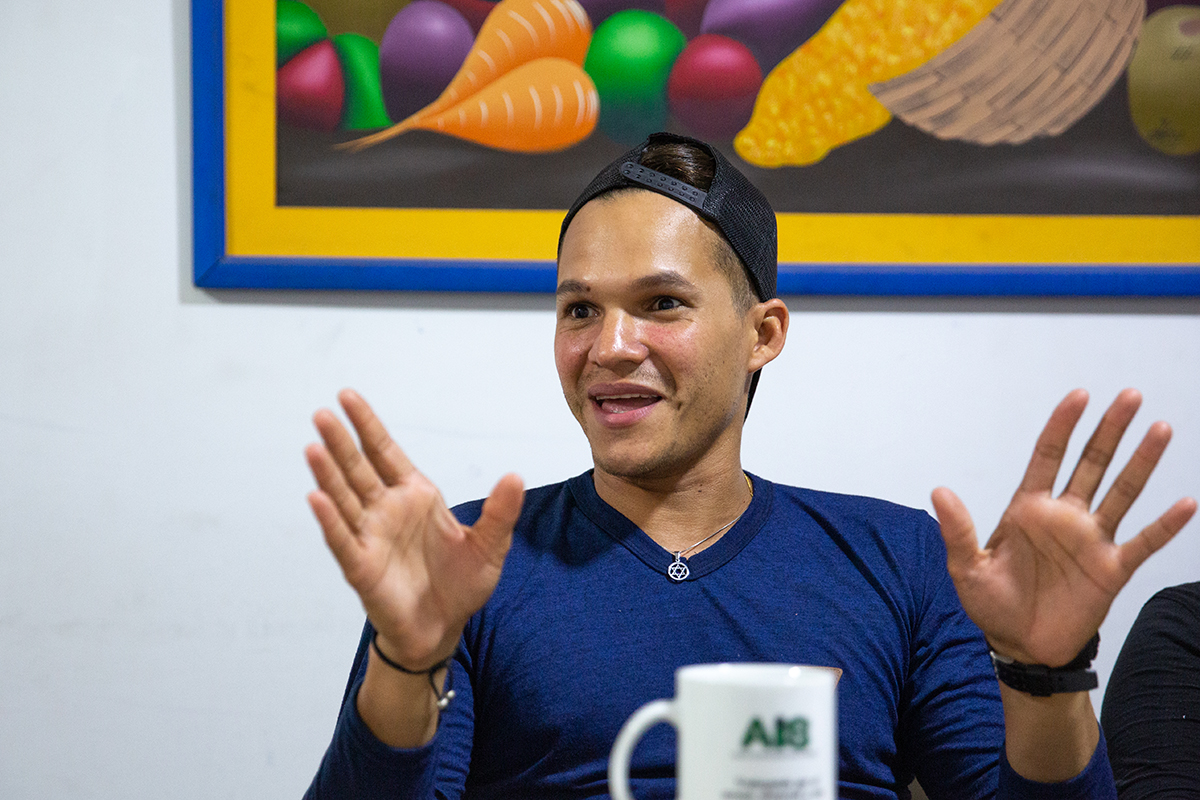 Luis Alberto Escobar is a nurse who migrated from Venezuela to Peru in May 2018, to have access to antiretrovirals and to work in his profession. To work as a nurse, Escobar needed to to get his credentials revalidated and send the results to the Ministry of Health.

“I was unemployed for about six months, saving up money, working in the informal market and taking out loans in order to pay for the re-evaluation. The process cost me around $1,200,” Escobar said.

Escobar worked at a private clinic until he was asked to take an HIV test because of his supervisors’ suspicions about his sexual orientation. This practice is illegal in Peru and considered workplace discrimination. Escobar was not hiding his diagnosis; he said he even asked whether working at the clinic as an HIV positive person would be a problem.

“That’s how I came in contact with PROSA, I felt that this discrimination should go unnoticed,” Escobar said. “The clinic told me that the HIV testing was mandatory when it wasn’t, and thanks to PROSA and their lawyers I’m currently disputing it in court.”

The support group ended the session by taking a trip to the Plaza de San Martin, a popular tourist attraction by day. By night, however, the plaza becomes a center for the sex work industry. 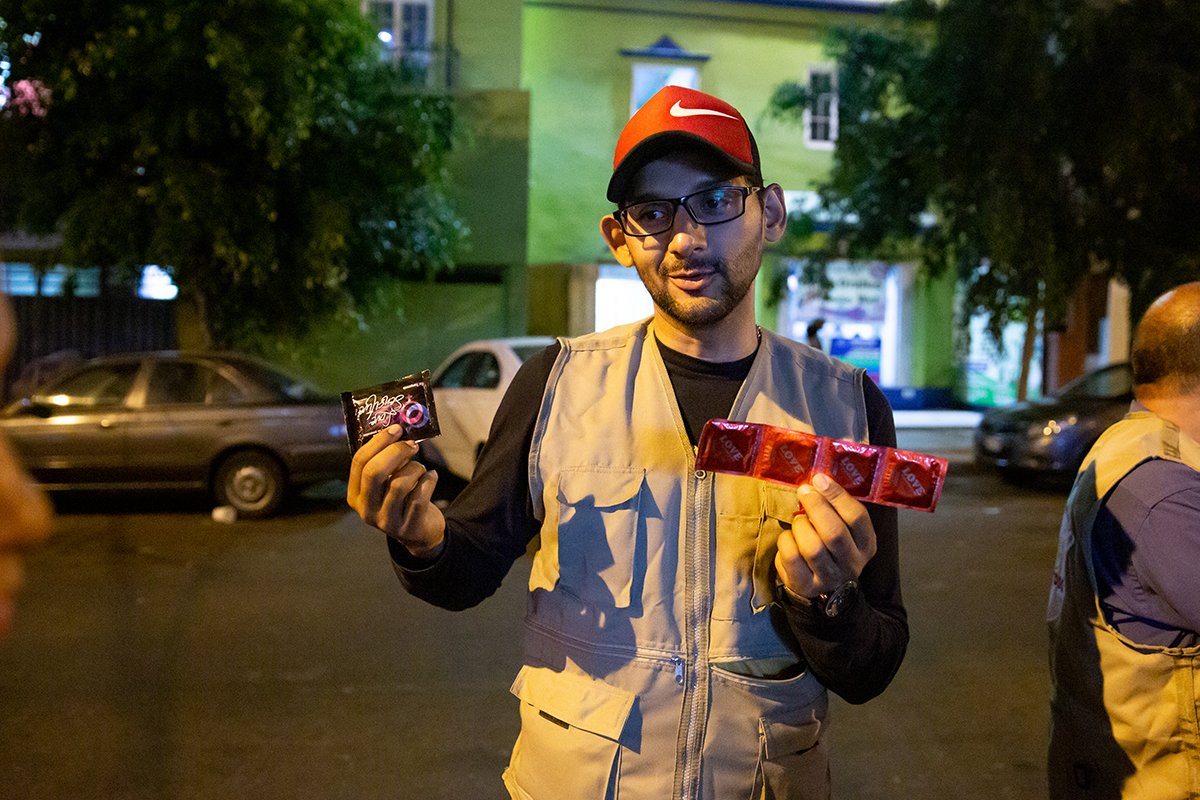 Emmanuel Linares holds up the condoms and lube that PROSA volunteers hand out at places frequented by prostitutes. (Photo by Anya Magnuson/Cronkite Borderlands Project) 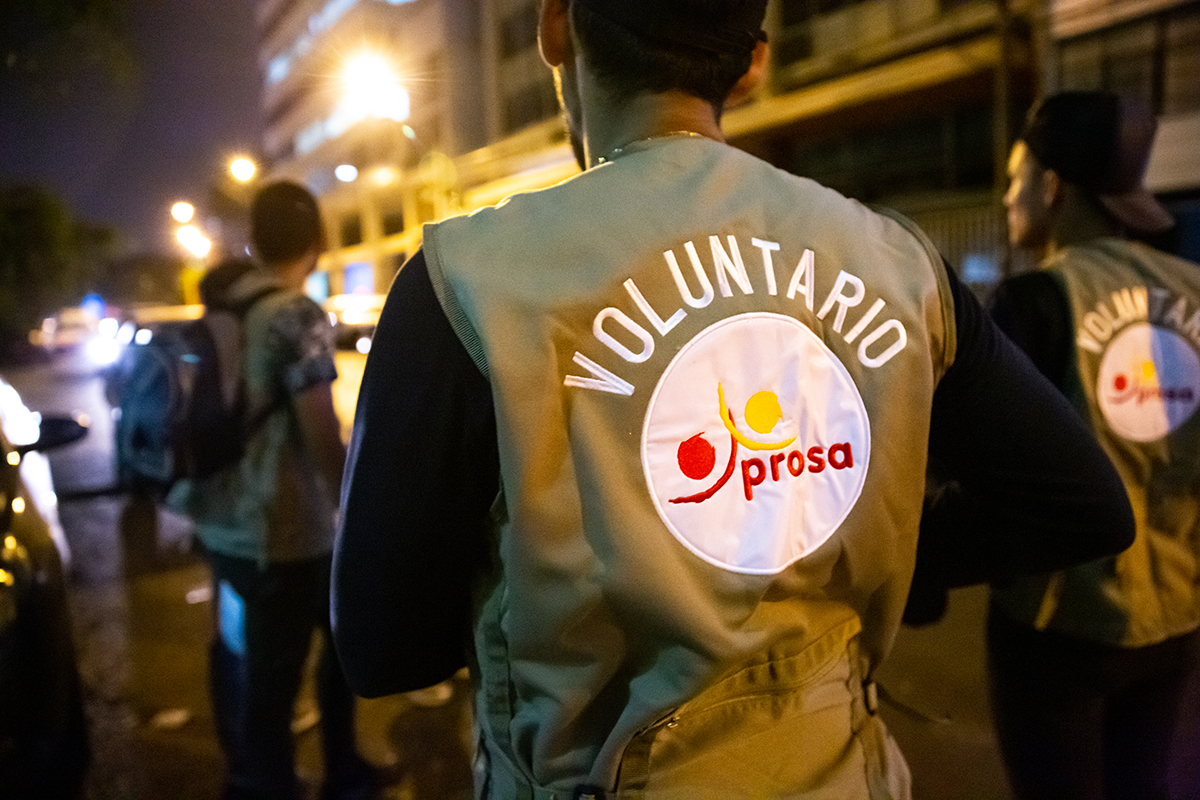 In addition to condoms and lube, PROSA volunteers try to educate sex workers about their high risk of contracting HIV. (Photo by Anya Magnuson/Cronkite Borderlands Project)

Cruz, the director of PROSA, said prostitution is a choice some Peruvians and migrants take to survive. For Cruz, the importance of educating and providing resources on AIDS prevention is just as important with sex workers as it would be with anyone else.

“We’re intervening directly with the community,” Cruz said. “We’re hosting AIDS testing pop-ups with the help of the Ministry of Health, and were having informative conversations to increase awareness of the risks they may face in sex work. We organize for them to have access to these resources and these conversations and then at the end we pass out condoms for them to keep.”

One by one, the support group gathered around the monument at the center of the Plaza de San Martin, trying on volunteer vests with “VOLUNTEER” neatly embroidered across the back in white, with PROSA’s logo underneath it. They all were handed condoms and lube to pass out.

“They aren’t alone anymore,” Cruz said. “It’s important for people who are HIV positive or who are supporting someone who is HIV positive to know that they can live a full life like I have for 30 years.”