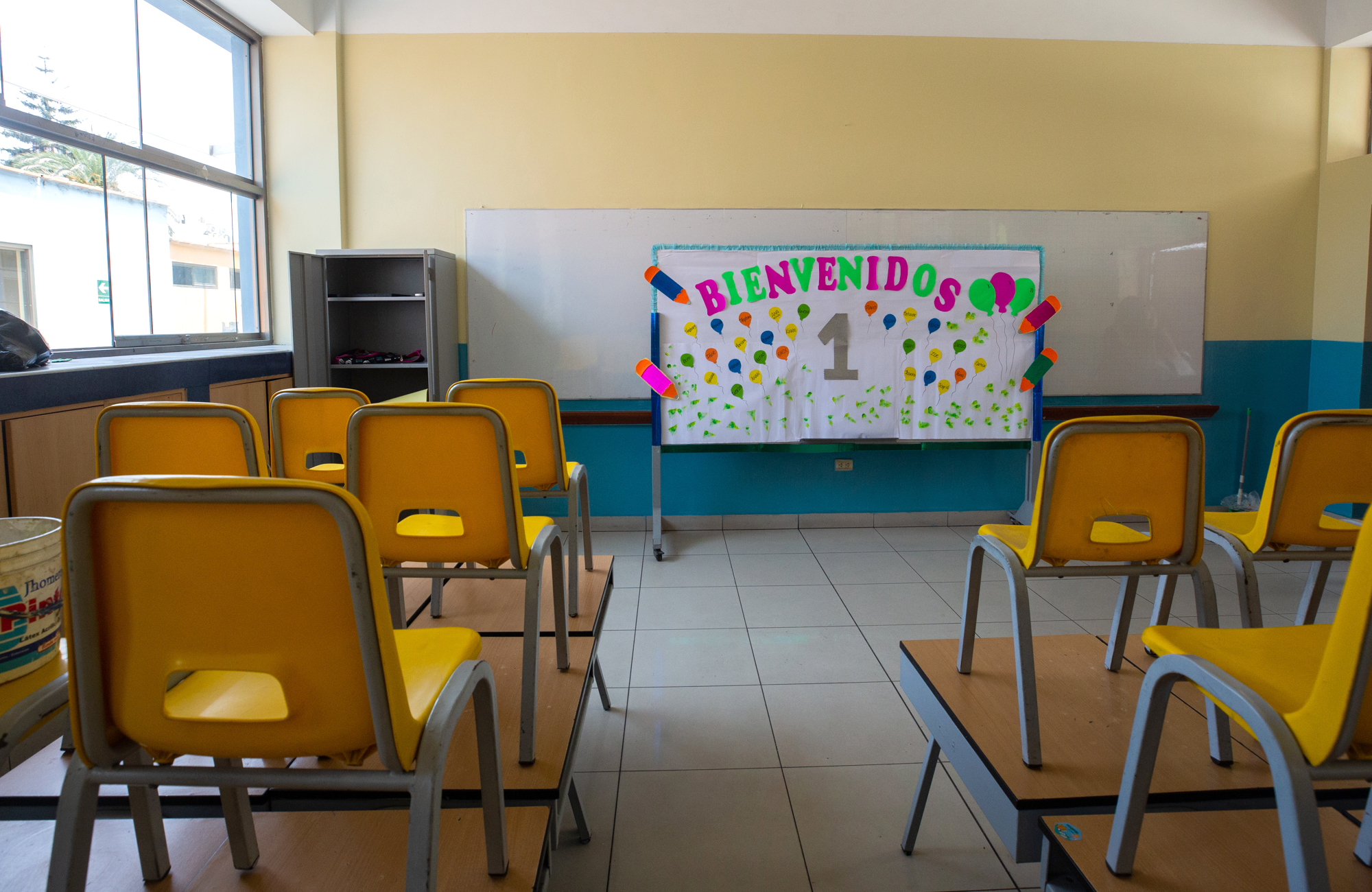 Faculty and staff were hard at work prepping rooms, like this first-grade classroom, the week before school starts at the Colegio Nacional Melitón Carvajal on March 7, 2019. Eight hundred primary students attend the school, according to the school’s director. (Photo by Molly Duerig/Cronkite Borderlands Project)

By Lindsay Walker/Cronkite Borderlands Project | May 3, 2019

Education officials said they expected 34,000 Venezuelan children to enter public school at the start of the school year in March, up from 26,000 last year. In most of the country – and particularly in Lima, where 85 percent of the estimated 700,000 Venezuelan refugees have settled – there aren’t enough spaces to accommodate them.

School is compulsory in Peru and Venezuela, so Venezuelan refugees are entitled to an education in their new country.

The task of dealing with the mass of students has fallen to Angie Zevallos, who was hired in January as the manager for the migration program at the Ministry of Education. She is charged with creating a plan to integrate Venezuelan children into Peruvian schools.

Zevallos, 32, has faced challenges before. In her previous position with the Ministry of Education, she developed a plan to create new secondary schools in rural areas that lack adequate education services.

“I had to build up a new team to do everything, and we didn’t have a budget,” she said. “We had to ask for special demands to make the project work.”

Zevallos now has an even greater challenge, with almost no staff and without dedicated funds. She was able to hire an assistant in late February, one week before Peru’s first day of school. Her proposed budget of $17 million has not yet been approved by the Ministry of Finance.

“Lima is also a city that has doesn’t have enough space even for the national kids because we also have a lot of internal migration,” Zevallos said. 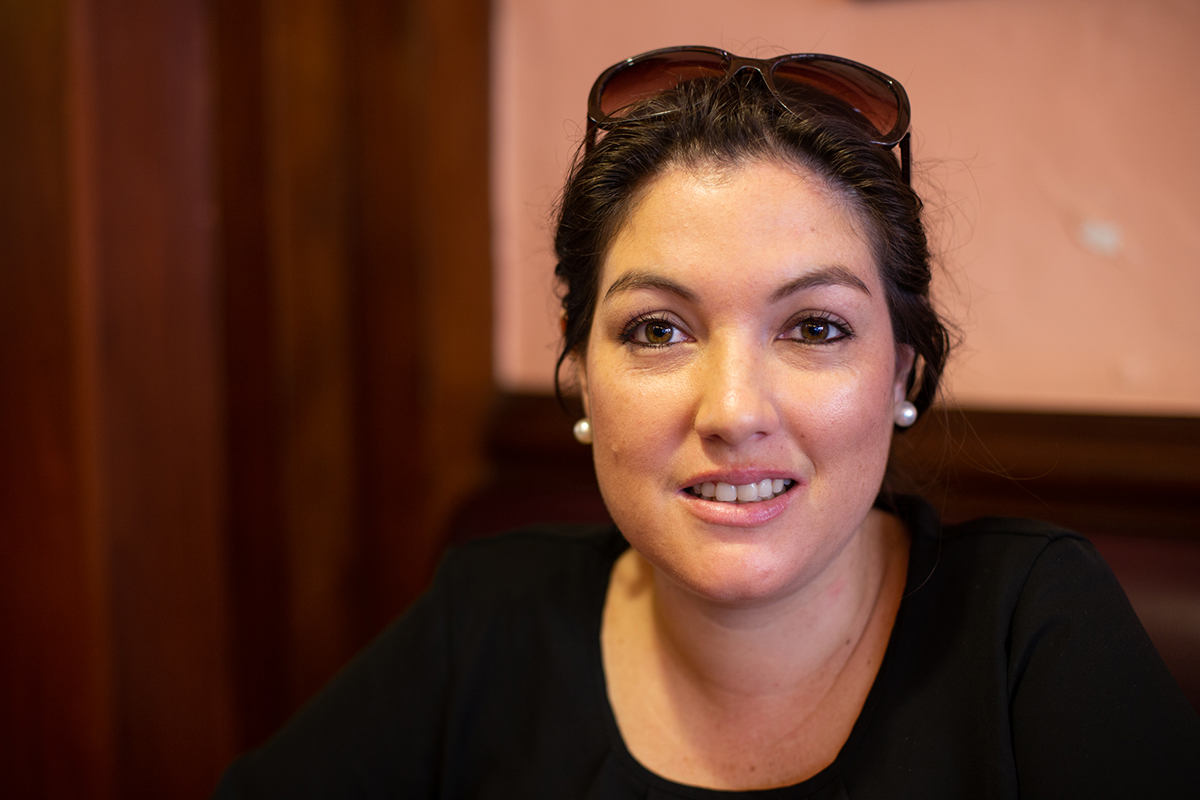 Angie Zevallos, 32, is solely responsible for leading the Ministry of Education's program designed to cope with the influx of immigrants into Peruvian schools. (Photo by Molly Duerig/Cronkite Borderlands Project)

Zevallos and colleagues have developed a three-phase plan aimed primarily at Lima public schools to ensure migrant children get the education they require.

The first phase is for all newcomers to take a standardized test to determine their appropriate grade level. The testing was supposed to take place in February but was delayed for lack of funding. It has still not been conducted.

Zevallos also is waiting for each school principal to update the internal communications system that informs the ministry of open school seats. As it is, the government doesn’t know how many seats actually are available for Venezuelan children.

The second phase would be to open schools at night to accommodate more children, followed by the third phase, which would provide refugee children with emotional support once they get settled in their new lives.

Although Zevallos said she believes in the plan, she knows the Venezuelan migration crisis won’t be solved this year. 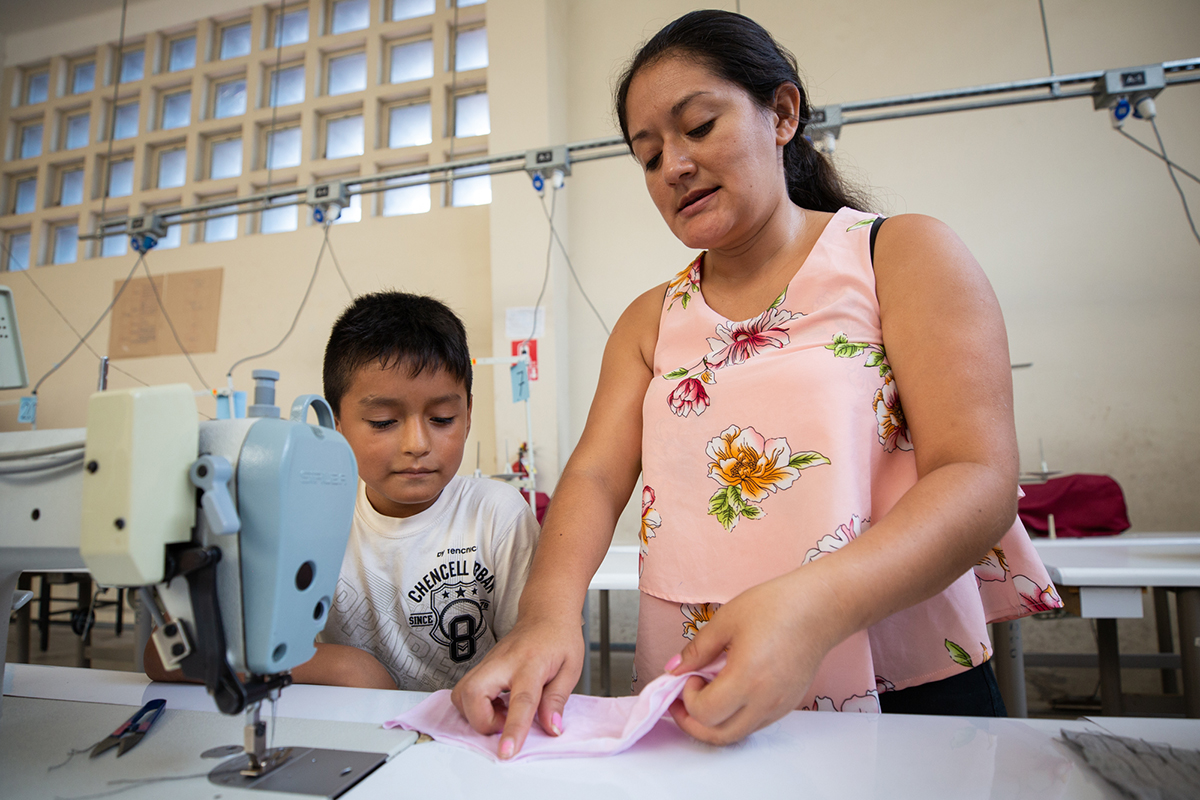 Diana Daria Capcha Gamarra guides her son, eight-year-old Dante Guillermo Agreda Capcha, in a basic sewing lesson at the Colegio Nacional Melitón Carvajal on March 7, 2019. Gamarra teaches in the school's sewing program, just one of the many professional programs the school offers its students. (Photo by Molly Duerig/Cronkite Borderlands Project)

Even before the Venezuelan migration, the quality of education in Peru was considered poor; according to the Organization for Economic Cooperation and Development, because of inadequate infrastructure, outdated learning materials and a lack of well-trained teachers. Even so, according to the Legatum Prosperity Index, Peru’s system is better than Venezuela’s: Peru ranked 81st in education, Venezuela ranked 97th. The index was created by the Legatum Institute, which measures poverty and prosperity around the world.

Venezuelan schools have been greatly affected by the country’s enduring economic crisis. Reuters reports that 3 million of the country’s 8 million school-aged children have dropped out, and schools are closing due to water and power cuts, transportation collapse and food scarcity.

More than 700,000 Venezuelans have made their way to Peru thus far, according to officials at the U.S. Embassy in Lima, with more arriving each day.

Alonso Gurmendi, an assistant professor of law at Universidad del Pacífico in Lima, said a developing country like Peru is not prepared to take on a refugee crisis of this magnitude. He specializes in human rights law and has been studying the situation in Venezuela closely.

“We missed a lot of the European immigration of the late 18th century, like Argentina had 400,000 Italians, Chile received hundreds of thousands of Germans,” Gurmendi said. “We didn’t, we received much smaller numbers. So we’ve never been a receiving country for immigration, so we’re just not ready.”

Nonprofit organizations, including UNICEF, the United Nation’s children’s fund, have stepped in to support an overwhelmed government.

Fernando Bolanos Galdos, the education director at UNICEF Peru who works closely with the Education Ministry, said a key issue facing Venezuelan migrant children is a lack of documentation. Obtaining documents in Venezuela is difficult and expensive.

“Many Venezuelans don’t come with their papers,” Bolanos said, referring to school certification that determines grade level. “The regulation says that each school principal can provide this test for incoming students, foreign or international.”

That lack of documentation means students may be placed in grades below their education level because grades in Peru usually are determined by age. Bolanos and Zeballos hope that a nationally standardized admissions test will eliminate some biases that come from each school conducting their own tests.

“Some make the test very hard or they start asking questions that don’t actually apply to Venezuelans; for example, about Peruvian history,” Bolanos said.

Because school attendance is mandatory in Peru, students rejected by one school must look for spaces in schools in different neighborhoods.

Zevallos said there’s no plan to provide transportation for children attending schools outside their neighborhoods, adding that the situation has led to tensions when Peruvian families lose open spots to Venezuelan newcomers.

That hasn’t been the case for Andrea Rosales and her daughter, Lisell Salas. The two moved to Huaycán, an impoverished area on the outskirts of Lima, in September 2017, along with Rosales’ Peruvian-born partner. Rosales recently gave birth to a son, rooting her in Peru despite her dreams to move back to Venezuela and reunite with her family once the crisis there has ended.

Rosales and her family came armed with passports and birth certificates. They were able to enroll Lisell in school without trouble and in the correct grade, though adjusting was not always easy.

“She would get home and say the kids didn’t want to play with her,” Rosales said of Lisell’s first few months of school. “I think that’s understandable, all the foreigners who arrive at a new school are going to get a little bit of rejection, then later comes the adaptation. Now she plays and she has her friends, quite a few.”

Lisell spends many of her afternoons playing with her friends at the Light and Leadership Initiative, a nonprofit started by Chicago native Laura DeVries in 2008 to fill the educational needs of Huaycán, where many residents don’t even have running water.

The initiative offers free after-school programs and supplemental classes – including English, art and sports – for ages 7 to 17, as well as an entrepreneur program for women.

Emma Livingston, an American, is the director of the Light and Leadership. The purpose, she said, is to create future leaders for Huaycán, where the average family earns less than 500 sols (about $150) per month. Many Venezuelan refugees live there.

“Most of Peruvian schools are really just focused on putting information in the kids’ heads, and we’re looking to build more soft skills, or skills that are not emphasized in Peruvian schools,” Livingston said.

Emma Livingston, an American, is the director of the Light & Leadership Initiative in Huaycán, a suburb on the outskirts of Lima. The Initiative’s mission is to create future leaders for the impoverished area. (Photo by Lindsay Walker/Cronkite Borderlands Project)

Although Light and Leadership hasn’t conducted research, Livingston said parents always tell her the program has helped their children in school.

Rosales has also noticed a difference between education in Peru and in Venezuela.

“In Venezuela, they give things in parts,” she said. “In Peru, the math classes are given very directly, the exercises, they don’t teach them that in multiplication, ‘OK, we’re going to do it in parts.'”

At Colegio Melitón Carvajal in the central Lima district of Lince, where about 2,000 students are enrolled, there are only 60 Venezuelans – 10 in primary school and 50 in secondary. The area is decidedly middle class, a far cry from the poverty in Huaycán. The school has elective classes in sewing, carpentry and cosmetology, although Principal Consuela Soto said they need more books and teachers.

Colegio Melitón Carvajal doesn’t have any openings for new students, but English teacher Shenne Carlos has empathy for Venezuelan refugees. 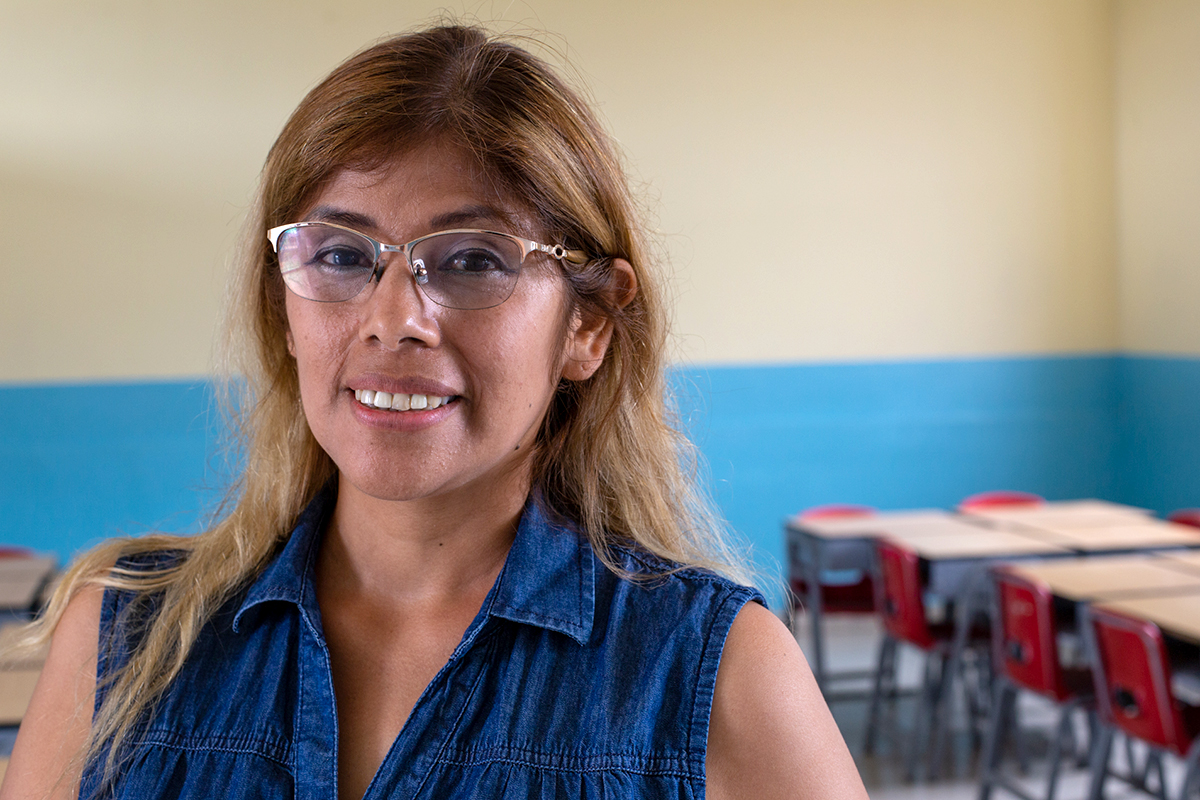 Shenne Carlos, an English teacher at the Colegio Nacional Melitón Carvajal, poses for a photo in a classroom the week before classes start on March 7, 2019. She said five hours of English lessons per week are required here for students of a school participating in the Ministry's Jornada Escolar Completa, or JEC, program. (Photo by Molly Duerig/Cronkite Borderlands Project)

“I feel for them. It is our turn to help them,” she said, referring to Peruvian migration to Venezuela in the 1980s and ’90s, when Peruvians were welcomed with open arms.

Gurmendi agrees that Peru has traditionally seen an outflow migration, the majority of which occurred in response to violence wrought by the terrorist group Shining Path.

“We have never been in our history on the receiving end of an immigration process,” he said.

That empathy towards newcomers is especially important as conditions in Venezuela continue to worsen and more of its population flees. Peru, like the United States and several other countries, no longer recognize Nicolás Maduro as president. Maduro, in turn, has refused aid for his people and shut down the Venezuelan borders.

“I think that’s a dream that all Venezuelans have,” Rosales said of returning to home. “For Venezuela to be what it was before, a lot of time would have to pass. But I would return, yes.”