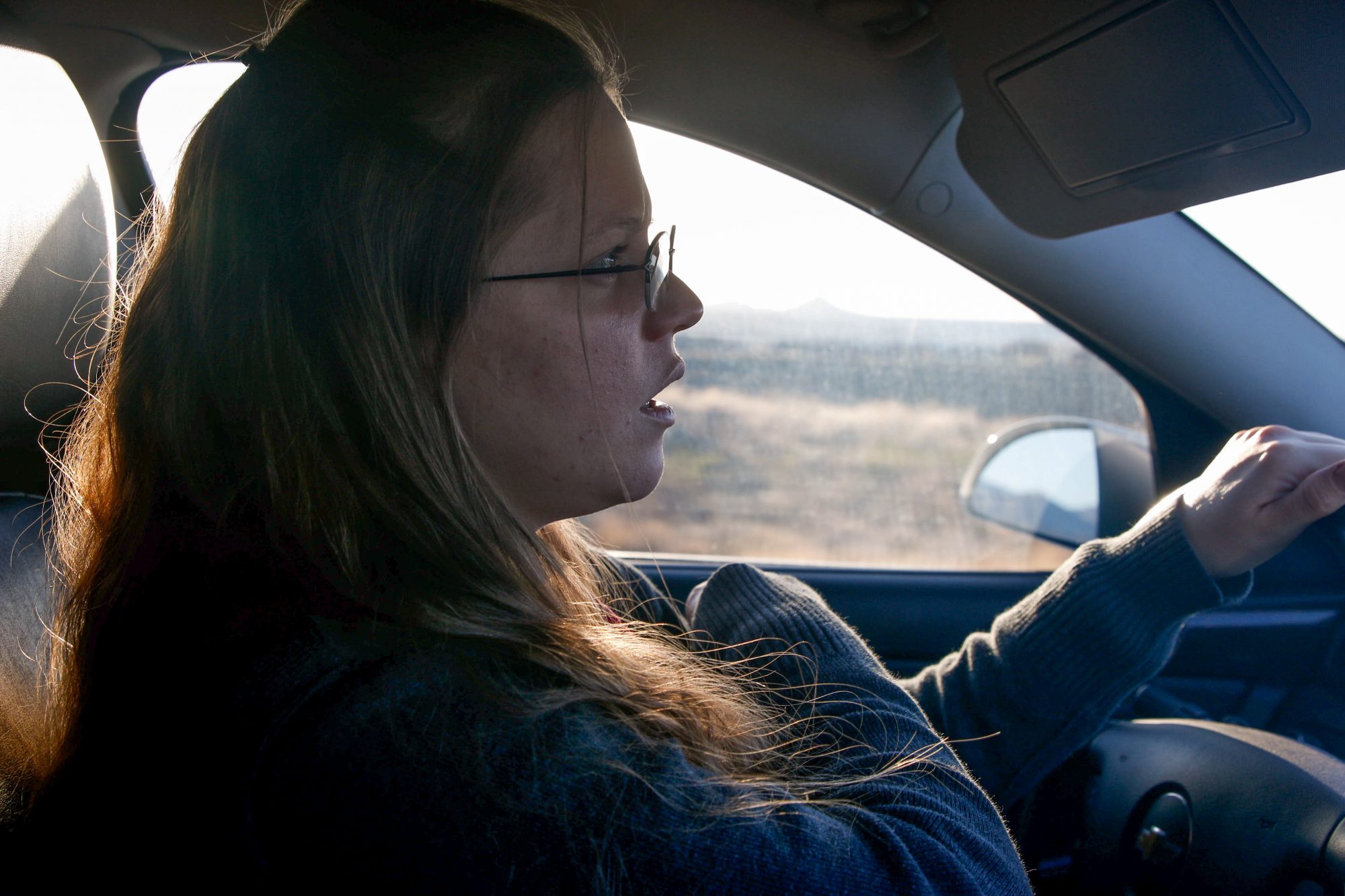 “I never wake up and go, ‘I can’t wait to take my methadone.’ It’s just part of the day, like drinking a cup of coffee,” says Maggie Phillips, who credits methadone treatment for her sobriety. “I feel healthier and happier now than I ever have in my life.” (Photo by Meg Potter/Cronkite News)

MORENCI – It’s just before sunrise as Maggie Phillips wakes her three children in the darkness.

The oldest, Jaxon, a second-grader, is headed to school. For the two youngest, Phillips packs clothes, snacks and toys for the hourlong trip to the methadone clinic.

Jesse, 3, runs around the small room he shares with his brother, Jayson, 4, looking for his favorite Spider-Man jacket. All three are dressed and ready by 7:30 a.m., when the school bus arrives for Jaxon. Phillips, Jayson and Jesse say goodbye as he climbs aboard.

Phillips straps her younger sons into their car seats and pulls out of the driveway for their once-a-month trip to Safford. The round trip is long for kids, but it’s half as long as it once was – Phillips used to travel all the way to Tucson, every day, for months, until Community Medical Services opened a year ago.

She has to get there before the clinic closes at 11:30 a.m. If she misses her appointment, she has to make the same trip the next day, or suffer drug withdrawals and miss another chance to beat her addiction.

“I have kids. I want to be sober for them,” said Phillips, 29, a homemaker whose husband stays behind to work. “The treatment helps me stay sober. It’s helped me be where I’m at today.”

Fighting opioid addiction always is tough, but it’s even tougher for rural residents who live miles from treatment clinics. Most clinics in the U.S., built in response to the heroin epidemic of the 1970s, are in big cities. These days, drug abuse has expanded to the suburbs and rural areas but the facilities to treat it have lagged because of funding shortages and the stigma around drug-treatment facilities.

In Arizona, 12 clinics treat addiction with methadone – a synthetic opioid used for decades to stabilize users and minimize withdrawal symptoms – but most are in the Phoenix area.

Tucson and Safford each has one clinic to serve the rest of Arizona outside metro Phoenix, meaning that many rural residents seeking medication for opioid addiction must travel hundreds of miles.

Advocates and opponents wrangle over whether methadone is the gold standard for treatment, if it merely substitutes one drug for another, or whether other treatments, including therapy and medication, are better.

For Phillips, who was once reluctant to take methadone, it’s a necessary step on an exhausting journey to recovery. She said not taking methadone plunges her into darkness.

“That’s the worst place I’ve ever been in my life,” she said. “I’d rather give birth every day for the rest of my life than ever feel withdrawals or feel sick again – it’s awful.”

In 2016, the opioid crisis in the U.S. cost more than $56 billion in law-enforcement costs, emergency-room visits, lost productivity and premature deaths, according to the Centers for Disease Control and Prevention.

Even as deaths have quadrupled over the past decade, the CDC says the number of people in methadone treatment has ticked up by less than 25 percent. Arizona health officials have recorded nearly 20,000 overdoses and nearly 2,800 deaths since 2017.

Phillips has struggled with opioid abuse since she was 15, starting with prescription pills before moving on to heroin. Her life to sobriety began when she was 20 and discovered she was pregnant with her first child, Jaxon, and decided to get sober. Phillips said she stayed away from drugs for a couple of years but relapsed after she was given medication to treat an injury.

Phillips started her methadone treatments when she was 25 and pregnant with her second child. She was reluctant at first, believing she would just be replacing one drug for another. 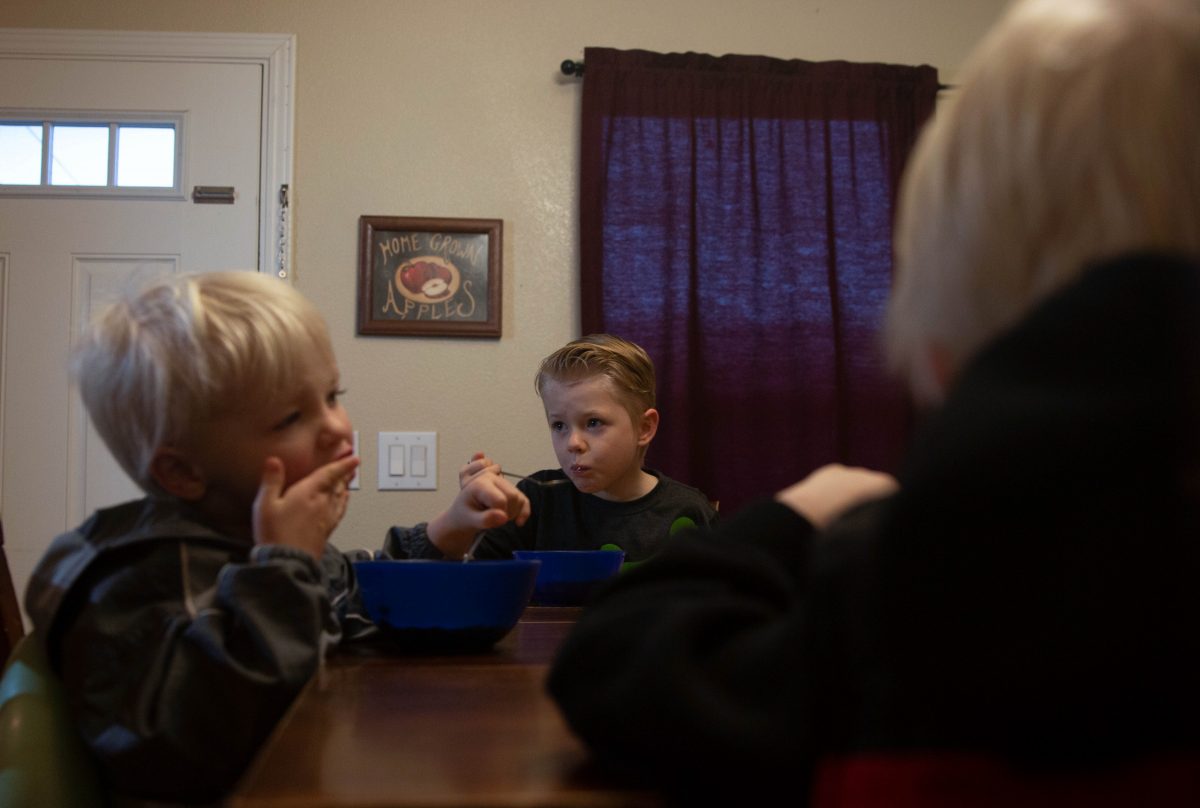 Maggie Phillips's oldest child, Jaxon (center), leaves for school the same time his mother and two brothers leave for the clinic, which is an hour away. Phillips makes the trip her two younger boys each month to receive methadone treatment, which she began at age 20 when she discovered she was pregnant with Jaxon. (Photo by Meg Potter/Cronkite News)

“I was like, ‘I really don’t want to do the methadone,’ and there was this awesome nurse that explained everything to me.”

Methadone imitates how opiates act within the brain, changing how the brain and nervous system respond to pain. It lessens the symptoms of opiate withdrawal and blocks the euphoric effects of such opiates as heroin, morphine and codeine. The right dose of methadone can eliminate withdrawal symptoms without causing the patient to feel high.

“I never wake up and go, ‘I can’t wait to take my methadone.’ It’s just part of the day, like drinking a cup of coffee,” Phillips said.

Clinics like the one in Safford usually are open for six hours a day, closing by noon or, at the latest, early afternoon. But at least Phillips has her 2014 Chevrolet Impala to drive to the clinic once a month.

“We encounter a large majority of our patients having transportation issues, and living here in a rural area like Safford, Arizona, you don’t know where they’re coming from,” said Keith Jeffery, clinic manager for Community Medical Services. 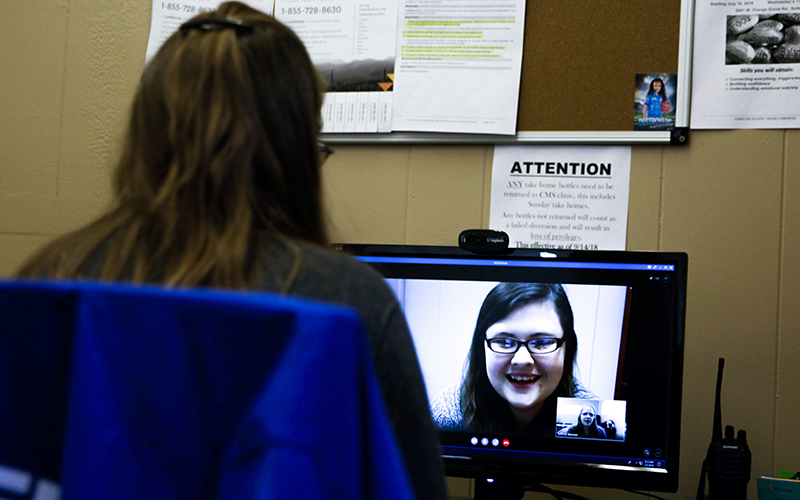 Along with medical treatments, Community Medical Services also provides one-on-one therapy for their patients. Maggie Phillips sees her behavioral-health specialist when she comes in for a methadone treatment once a month. (Photo by Meg Potter/Cronkite News) 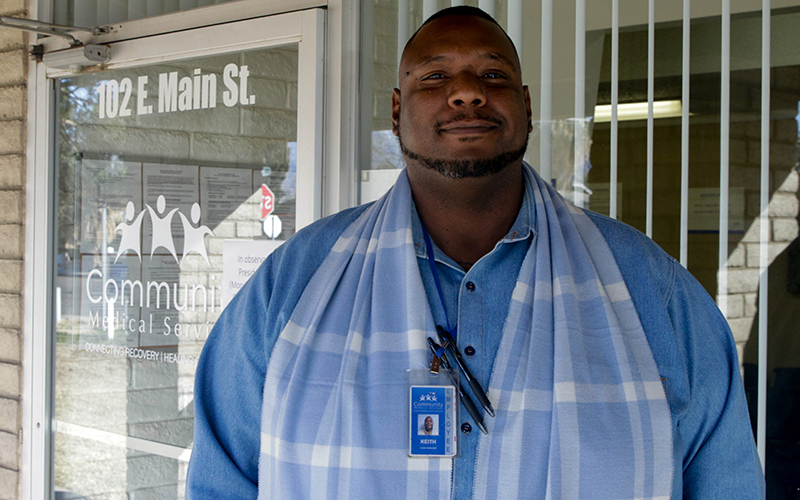 When patients first start treatment, they must visit the clinic every day – a travel time of one to four hours. Several months later, the trips may decrease to twice a month, later falling to once a month.

Patients spend nearly $50 per week just on travel costs, and they often have to drive backroads. The lack of transportation leads to patients missing treatments, which results in more relapses.

“They can be coming from any of those small towns, so the travel can be treacherous at times,” Jeffery said.

Then there are the hidden costs, such as Phillips gathering up her boys and hauling them for a journey that takes most of the day.

Once at the clinic, Phillips goes to the front desk to tell them her number, then takes a urine test and consults with a counselor in the dosage area. Jesse and Jayson play in the waiting room while their mom receives her 90-minute methadone treatment. Clinic employees know the boys and play with them until Phillips is finished.

Clinic advocates say the struggle to get medicine-assisted centers opened in rural areas rests on misconceptions they are crime magnets, with opponents showing not-in-my-backyard mentality associated with these clinics.

Graham County Sheriff P.J. Allred said he prefers not to have the clinic, but he acknowledges the need.

“I am not a big fan of that, but at the same time, the folks who are doing these things, they’re not here to hurt or harm folks, they’re here to help them,” Allred said.

“We live in a pretty beautiful spot in Arizona, but we still have the same types of things (drug abuse) taking place in our part of the state.”

Opponents argue that outpatient drug treatment centers bring violent crime into the neighborhoods where they are placed.

New research from Johns Hopkins Bloomberg School of Public Health suggests there may actually be less serious crime near clinics than other community businesses. The study found that there was 25 percent more violent crime around liquor stores and corner stores compared with drug treatment centers.

Government and private funding for such clinics also is lacking. Only a handful of commercial insurance plans have recently begun paying for such treatment. About a dozen states, mostly in the Midwest and Southeast,have prohibited their Medicaid programs from covering methadone-based therapy, according to the Pew Research Center.

The World Health Organization states that detox alone – which basically means medical supervision while a recovering drug user goes through withdrawal – commonly leads to relapse and rarely is enough to help someone recover from opioid dependence.

Methadone is considered the gold standard of care for those seeking to recover from opiate addiction, according to the National Institute on Drug Abuse. Health professionals state methadone treatment is most effective when combined with substance-abuse counseling and other supportive services.

The proper dose for methadone treatment is different for each patient. The patient and doctor achieve the correct dose when the patient no longer feels withdrawal or a “high.” A patient must be supervised during daily dosing in a state-licensed opioid treatment program for the first month or more. 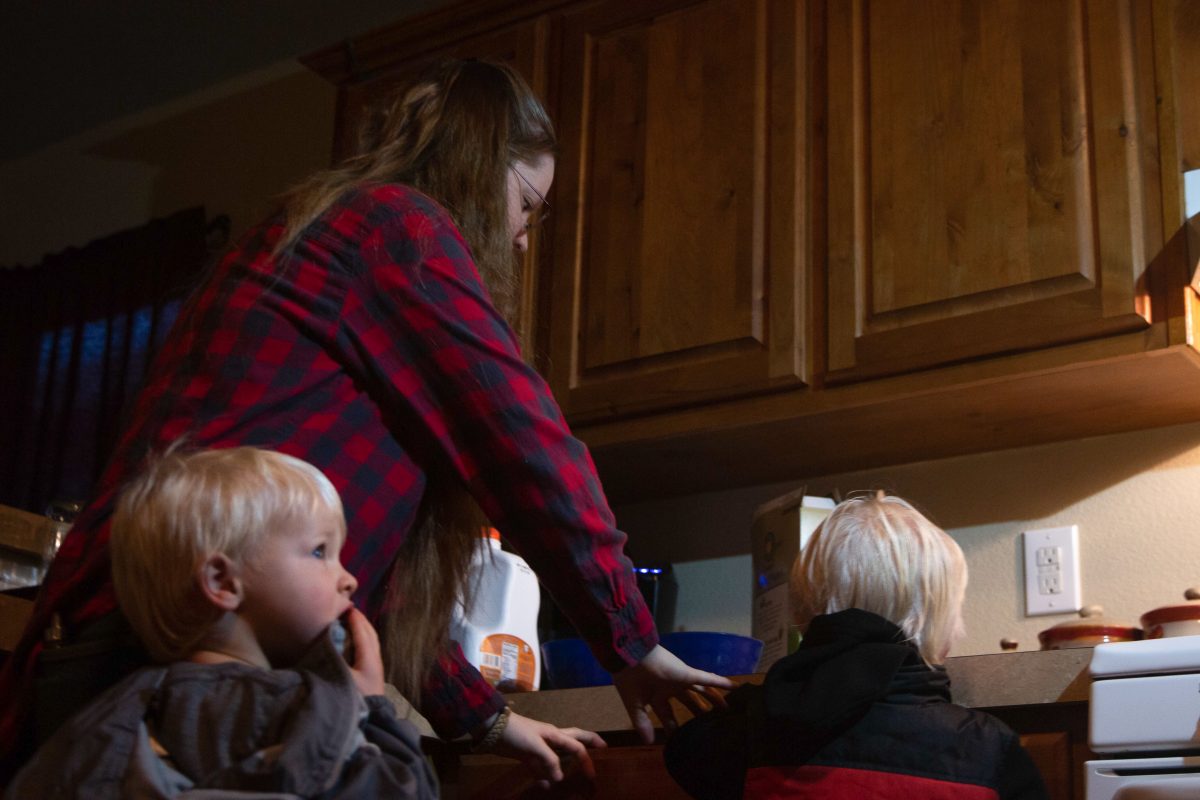 Maggie Phillips' history with opioid addiction began when, as a teenager, she tried prescription pills at a party. She eventually turned to heroin. When she found out she was pregnant with her first child, Jaxon, she began her journey to sobriety. She helps get her two youngest children ready for the trip to a methadone clinic. (Photo by Meg Potter/Cronkite News)

At that point, many patients are allowed to take a month’s worth of medication home with them, but federal regulations still require that they pick up their doses at the clinic and check in regularly. Most people spend more than two years on methadone, and some continue taking it for decades. The regimen is similar to diabetics who are dependent on insulin, with those on methadone no longer experiencing the compulsive thoughts and behaviors that define drug abuse.

This dependence has lead opponents to believe that such treatments merely replace one drug for another. When recovering drug users have methadone to stabilize themselves, they trade dependence on a dangerous opiate for dependence on a medically supervised and safe opioid that’s regularly prescribed to treat moderate to severe pain.

Methadone and medicine-assisted treatments not only require a regular dose, but also a behavioral health component. Counseling and behavioral therapies are required to provide a “whole-patient” approach to the treatment of substance use disorders.

“Here, I haven’t really done much with the behavioral health component in this clinic with me personally,” Phillips said of the Safford clinic. “But in the past with other clinics, it’s everything. It all works together, so it’s very vital to maintaining sobriety.”

Philips said the treatment was the better route for her and the Tucson clinic offered her support when she felt ashamed during her second pregnancy.

“It was really hard in the beginning. It’s nice to have those people that you know are thinking that you are doing the right thing,” she said.”Because even when you go to the hospital to have the baby, I felt necessary to explain my story to everyone who I came in contact with.”

Heroin addiction controls the life of the person and ends his or her ability to make healthy choices or good decisions. But once someone enters a methadone maintenance treatment, the person is back in the driver’s seat, advocates say.

“We have patients come in everyday and we see the transformation, from day one to day 30, they’re not even the same person anymore.” Jeffery said.

After Phillips is done, the boys run around outside and play with the clinic staff before heading for home.

The trip, she said, is always worth it.

“I feel healthier and happier now than I ever have in my life,” Phillips said. “I really contribute that to the methadone.”