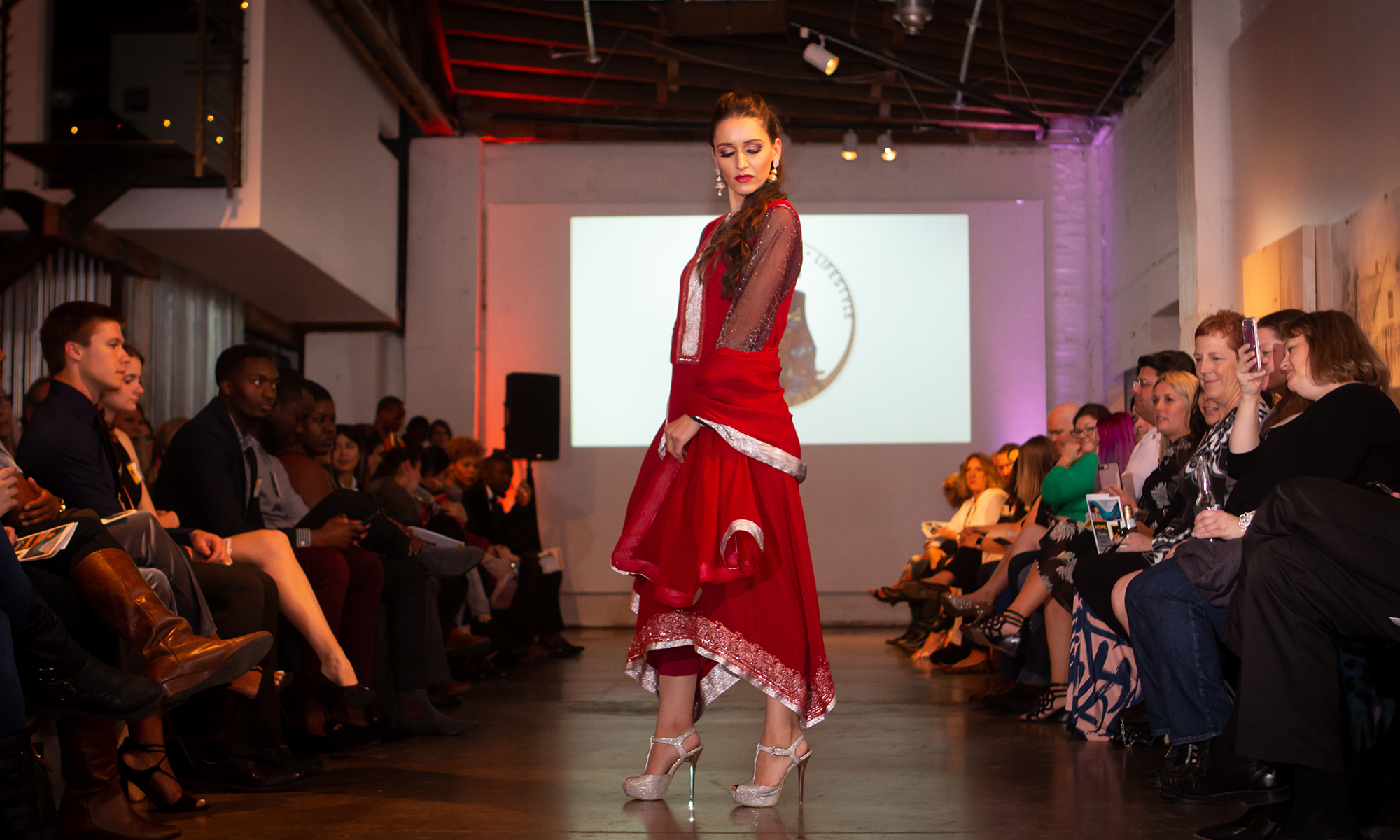 A model wears a design by Noreen Amir, whose creations are influenced by the cultures of Pakistan and India. (Photo by Delia Johnson/Cronkite News)

Phoenix fashion show shines spotlight on refugees and their contributions

PHOENIX – The audience watched in awe as models wearing ornate, handmade gowns with intricate trimmings walked the runway. Camera flashes illuminated their robes, inspired by styles from around the world.

The HOPE Couture Global Fashion Experience provided the backdrop for this world of fashion last month. Held at MonOrchid on Roosevelt Row north of downtown, it showcased art and fashion created by seven refugees living in metro Phoenix. About 100 people attended the event, which was organized by the International Rescue Committee in Phoenix, part of a global organization that helps refugees rebuild their lives by providing them with fundamental services ranging from food to health care to housing.

Noreen Amir, a refugee from Pakistan, opened the show with her designs. It was the first time her work had been displayed on a runway.

“I was speechless,” she said.

Amir came to the United States with her family last year after what was, she would only say, a long and difficult journey.
She was happy, however, to talk about the loan she received from the IRC, enabling her to open her own fashion business.

“I don’t work only in one culture. My designs aren’t only Pakistan designs or Indian designs.” she said. “It’s mixed up, so anybody can use my dresses.”

Although her work is new to Phoenix, Amir has been designing for years, and she has aspired to run a fashion business since she was young. “The way it comes out, what you have in your mind, it made me come to be a designer, so I can create.”

Amir hopes people in Phoenix will support refugees who open small businesses, looking for ways to establish themselves as part of the community.

“They have come all the way struggling from the past, and I really want people to be supportive of them, if they are trying to start their business.” she said.

According to the Refugee Processing Center, from Oct. 1, 2018, to Jan. 31, 230 refugees came to Arizona, the seventh highest rate of arrival in the country. Although that may not sound like many people, it’s more than in many other U.S. cities.

“Arizona is actually one of the highest states for refugee resettlement,” said Stanford Prescott, community engagement coordinator for the International Rescue Committee in Phoenix. “When refugees first arrive, we provide a lot of services targeted at self-sufficiency and integration.”

Rabah Alhariri, a henna artist who fled violence in Syria, is now able to earn money for her family with the help of the IRC in Phoenix.

At the show, as Alhariri delicately drew with henna liquid onto the hands of attendees, her daughter Kheloud stood by translating.

The IRC helps her family with everything, Kheloud said.

“When there’s a fashion model or anything, they call my mom to come to do henna for the women.”

The IRC in Phoenix raised money at the show to continue its mission to help refugees restart their lives. The group provides food, education, English language classes and, as seen with the show, the tools to start their own businesses and become self-sufficient.

Prescott said the HOPE Couture Fashion Experience and other events provide an opportunity for these immigrants to share their culture with others.

“For many refugees, this is a way to earn a living, to expand, and to find some economic success,” he said.

The Phoenix agency has helped resettle about 15,000 refugees since 1994. They came from the Democratic Republic of the Congo, Afghanistan, Syria, Iraq, Somalia, Ethiopia, Burma and many other countries.

Prescott said they are hoping to expand services for asylum seekers, as there is no government funding to help people with the immigration status of asylum seeker.

Prescott said refugees can be – and are – successful people who are bringing their talents to the U.S., and it’s important to provide them with the proper resources to succeed. 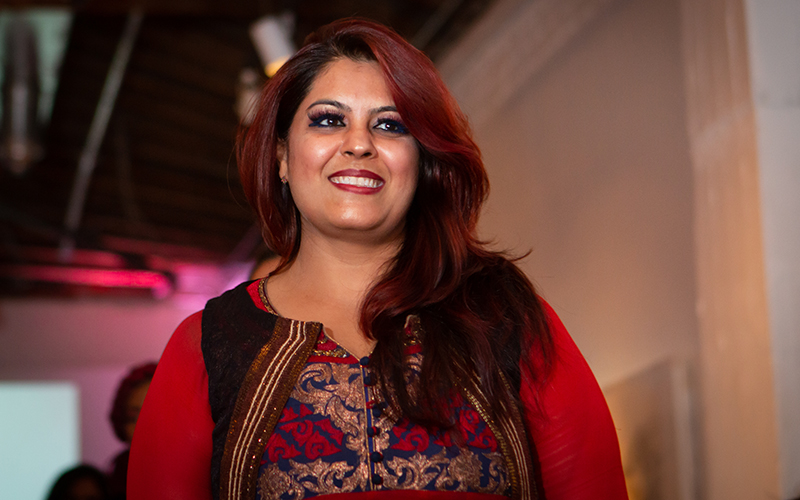 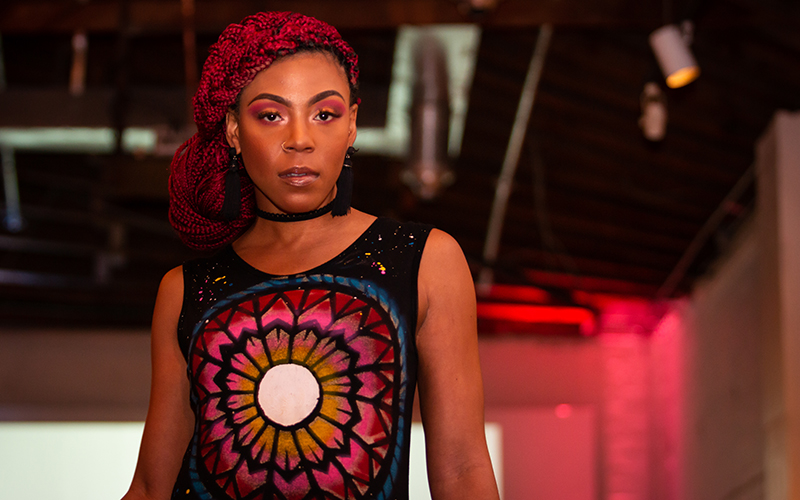 Noreen Amir's designs where among those shown at the HOPE Couture Global Fashion Experience in Phoenix last month. Since 1994, the International Rescue Committee in Phoenix has helped resettle about 15,000 refugees in Arizona. (Photo by Delia Johnson/Cronkite News) 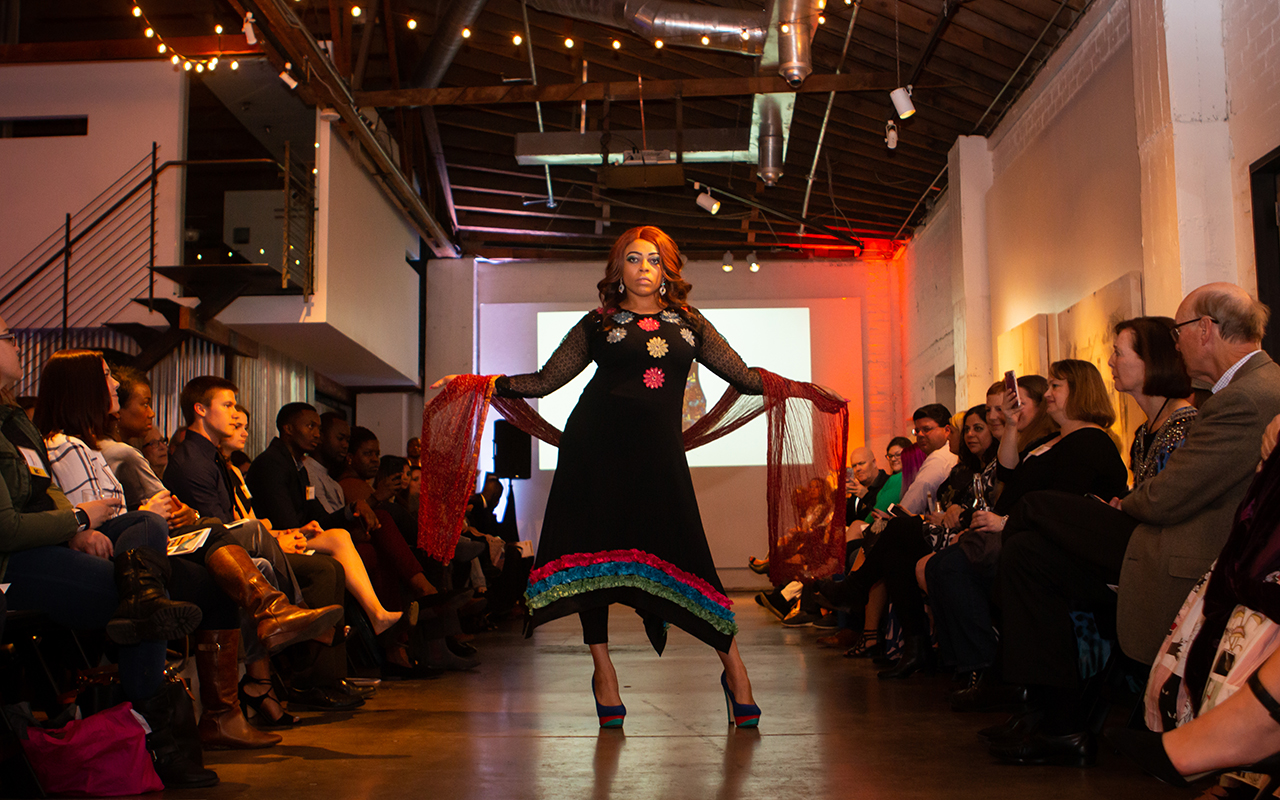 A model wears a design by Noreen Amir, a Pakistani refugee who is inspired by many cultures and styles. (Photo by Delia Johnson/Cronkite News)