Pro-choice protesters voice their support for access in this 2016 file photo from outside the Supreme Court. The Trump administration wants to prohibit Title X funds, for family planning from clinics that provide abortions. (Photo by Meghan Finnerty/Cronkite News) 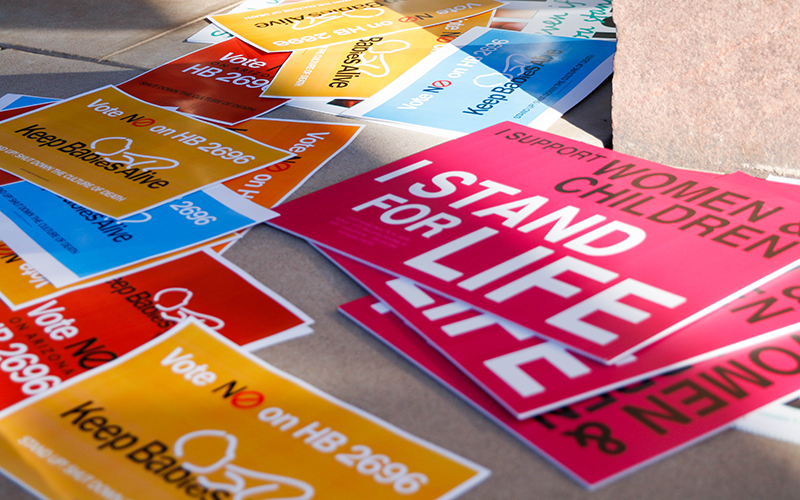 Pro-life groups are welcoming the administration’s proposed changes to Title X funding, arguing that by prohibiting the use of family planning funds for abortions, more money will be available for other family planning services. (Photo by Oskar Agredano/Cronkite News)

WASHINGTON – Tayler Tucker said a Trump administration plan to prohibit funding of family planning clinics that provide abortions will have a “huge impact” on the ability of Planned Parenthood Arizona to continue its work.

But she’s just as certain when asked if the organization plans to back down in the face of the funding change, which she sees as the first step in a larger administration plan.

“N.O. No. There’s no chance,” said Tucker, spokeswoman for the Arizona organization. “Let’s be real, it starts with this but goes to birth control and other attacks.”

The step she is concerned about was the Department of Health and Human Services’ recent announcement of revisions to Title X, the federal program that funds family planning services for the needy.

Among other changes, the shift would deny Title X funding to any clinic that performs, promotes, refers for or supports abortion as a method of family planning. It would deny funding to clinics unless there was a “clear financial and physical separation,” with abortion services provided in a separate building from any other contraceptive care.

The new regulation also drops a requirement for “non-directive pregnancy counseling,” meaning clinics no longer have to lay out options and let a patient decide. Instead, they would be free to recommend a course of action, including a recommendation against having an abortion.

The changes, unveiled last month and formally posted Monday, have already drawn legal challenges. In separate lawsuits this week, California and a coalition of 20 states and the District of Columbia went to court to block the new rules that they are calling a “gag rule” on abortion rights. Arizona was not among the states that filed suit.

But in a statement when the new rules were unveiled last month, Health and Human Services said the changes mark the first major updates to Title X since 2000 and are designed to “increase the number of patients served and improve the quality of their care.”

Cathi Herrod, president of Center for Arizona Policy, welcomed the proposed changes to Title X, saying that redirecting the money will allow the program to serve more families.

“There are more than 150 community health centers in Arizona that offer extensive services for women, including mammograms, screenings, and more – but they do not offer abortions,” Herrod said in a statement on the changes. “Title X funding will support these clinics to help low-income families, giving them far more options than the handful of Planned Parenthood clinics in the state.”

Trump calls for abortion restrictions in State of the Union address

“Abortion is not family planning. Title X funds should not support clinics that provide abortions” because taxpayer money should be used for other services, she said.

The new rules were first posted for public comment last summer, drawing more than 500,000 comments according to HHS. After those were reviewed, the 312-page final rules were unveiled Feb. 22.

The new rules were published Monday in the Federal Register and will not start to be phased for another 60 days. Certain provisions, like the requirement for physically separated spaces, will not be enforced for a year.

But opponents of the changes are still vowing to fight.

Rep. Raul Grijalva, D-Tucson, said the cuts are an attack on women’s health by an administration that “has needlessly inserted itself into conversations that should remain between a woman and her doctor.” He said in a statement that he will “fight any and every attempt to take away health care from our most vulnerable populations.”

“Defunding critical women’s health centers and barring doctors from discussing all available health care options with their patients is an assault on the fundamental right of women to make their own health decisions and disproportionately impacts low-income women and communities of color,” his statement said.

“That’s a huge impact,” she said. “There’s no way we can make that up with purely donations.”

But, she said, Planned Parenthood “is not willing to make accommodations” to comply with the new rules.

“We understand abortion is part of a comprehensive and real contraception right,” she said.