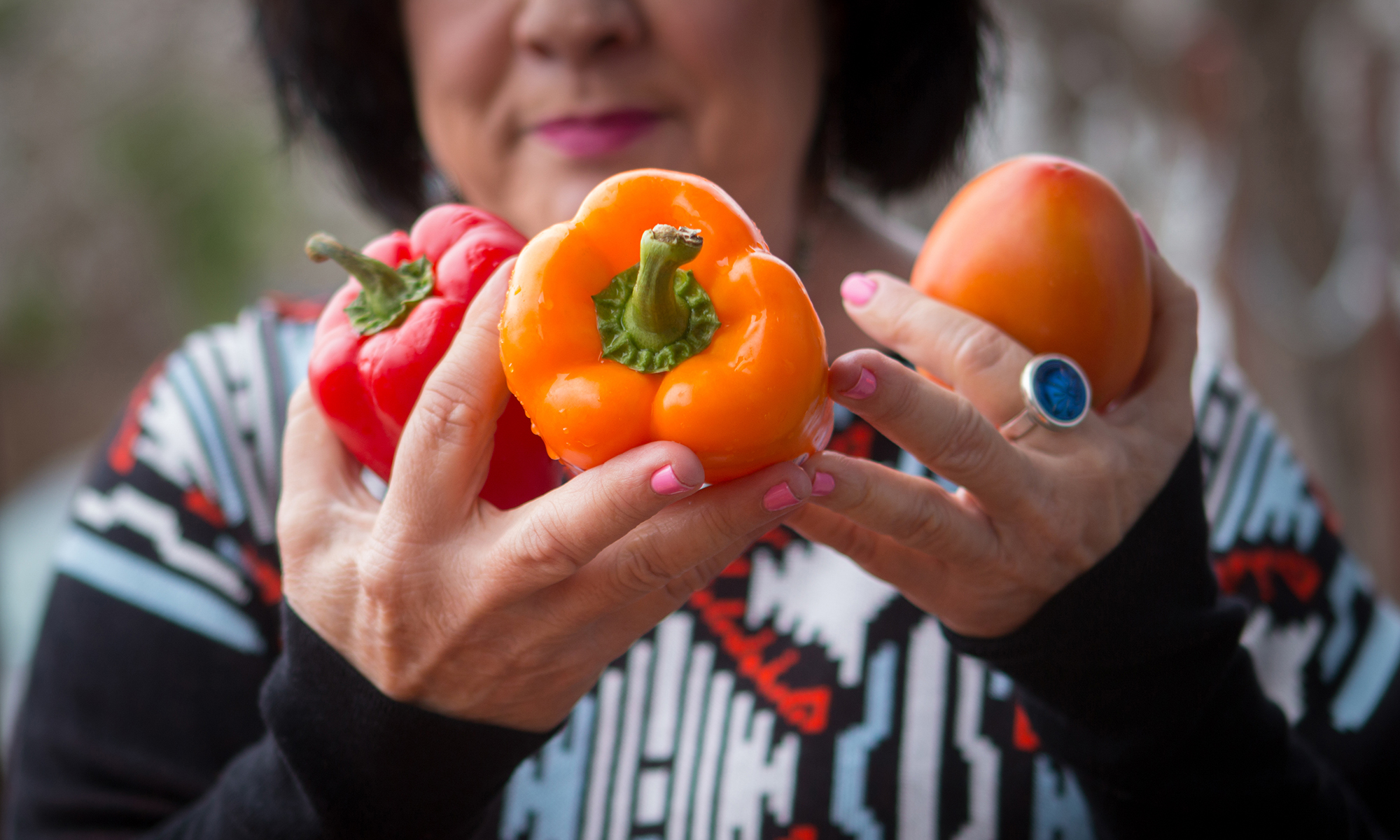 Borderlands Produce Rescue CEO Yolanda Soto said “rescued” produce that would otherwise go unsold at grocery stores and wind up in landfills can feed people who might not have access to fresh fruit and vegetables. (Photo by Delia Johnson/Cronkite News)

TEMPE – In biting cold on a recent Saturday, a group of people huddled underneath the solar panels on parking lot 59 at Arizona State University’s Tempe campus. They waited to take their pick from a cornucopia of zucchini, squash, watermelons and peppers that had been trucked in and piled onto tables.

Produce on Wheels Without Waste was responsible for the bounty of fruits and vegetables, distributing and delivering fresh produce at a discount to low-income communities and areas in so-called food deserts.

At this pop-up market in lot 59, produce costs pennies per pound.

“For someone who might be on tighter of a budget, 70 pounds of food for 12 bucks, that’s hard to beat,” said Nathan Morrison, a South Phoenix resident who has been coming to the P.O.W.W.O.W. market, as the program is known, for more than a year.

Morrison said he is resourceful, preserving any leftover produce or making compost for his garden.

“There’s so much you can do with it.” he said. “As opposed to eating it, I do canning and pickling and that kind of stuff too, so I can make stuff like this last.” 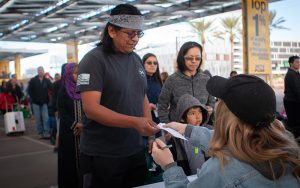 Jeremey Morgan frequently shops at P.O.W.W.O.W. produce events with his 5-year-old son. “We’re able to buy a lot and save a lot so we don’t have to go to the grocery store. And it gives us something to do on Saturdays,” Morgan said. (Photo by Delia Johnson/Cronkite News)

The fruits and vegetables he receives at a P.O.W.W.O.W. can last him for up to a month.

Borderlands Produce Rescue, which runs P.O.W.W.O.W., retrieves produce, unlikely to be sold to consumers, from warehouses of such grocery stores as Frys, Safeway and Food City, then prepares the food for distribution at a discount.

The organization has helped feed more than 100,000 households, and each year rescues 33 million to 40 million pounds of produce that otherwise would end up in landfills, organization leaders say.

“America produces enough food to feed everybody, so we might as well use what we can,” Morrison said. “If they can’t use it in the stores, give it to people who are willing to take the less prettier ones. It all turns into mush anyway.”

Jeremey Morgan went to lot 59 with his son Jaiden, 5.

“We’re able to buy a lot and save a lot so we don’t have to go to the grocery store, and it gives us something to do on Saturday,” he said. 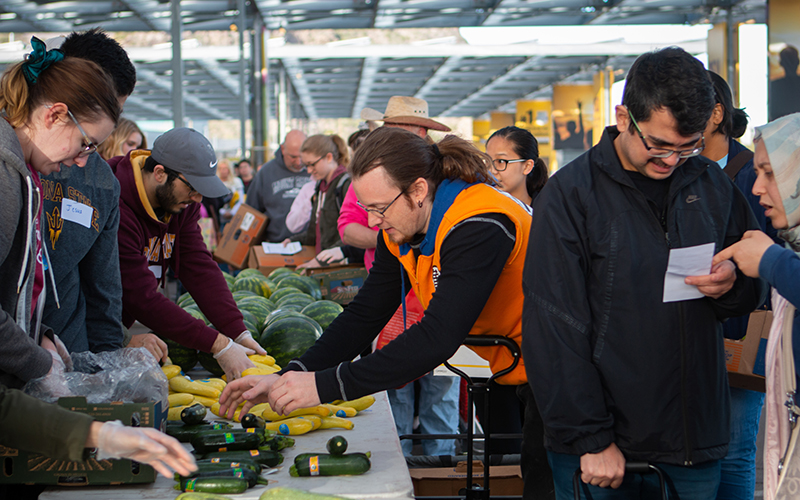 Nathan Morrison reaches for zucchini at the Borderlands Produce Rescue P.O.W.W.O.W. in Tempe. 'America produces enough food to feed everybody so we might as well use what we can,' Morrison said. 'For someone who might be on tighter of a budget, 70 pounds of food for twelve bucks, that's hard to beat.' (Photo by Delia Johnson/Cronkite News) 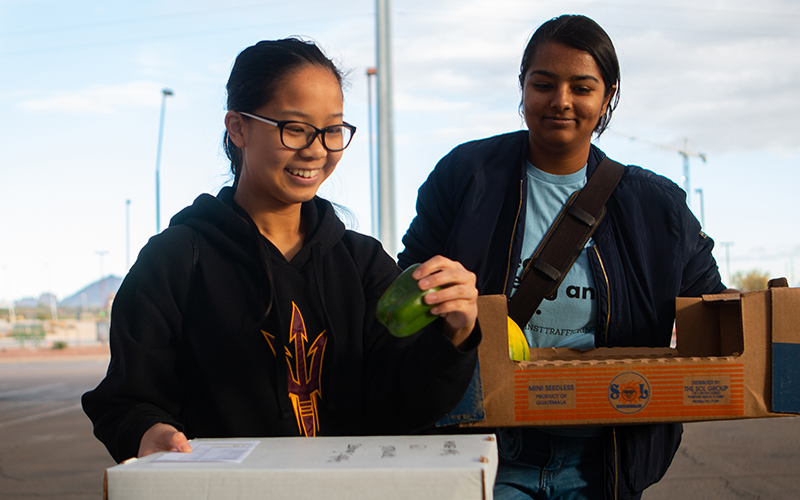 'Ugly food needs to be eaten, too,' said Andrea Yang (left), with Myra Khan. The Arizona State University students shop at the produce rescue P.O.W.W.O.W. on the Tempe campus. 'It's great that they have low costs and they give out to people who need it as well as in bulk instead of throwing it away,' Yang said. (Photo by Delia Johnson/Cronkite News) 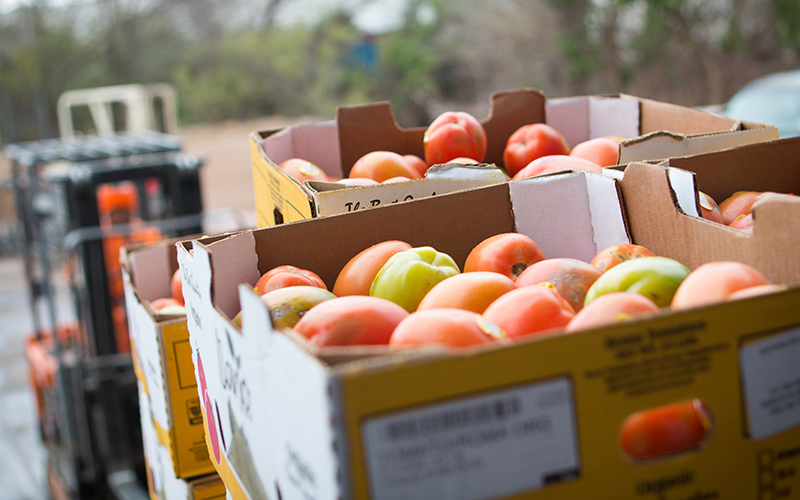 Borderlands Produce Rescue goes through 33 million to 40 million pounds of food annually, leaders said. More than 40 varieties of produce are offered throughout the year. Climate change and natural disasters affect the quantity and variety of produce the group receives. (Photo by Delia Johnson/Cronkite News) 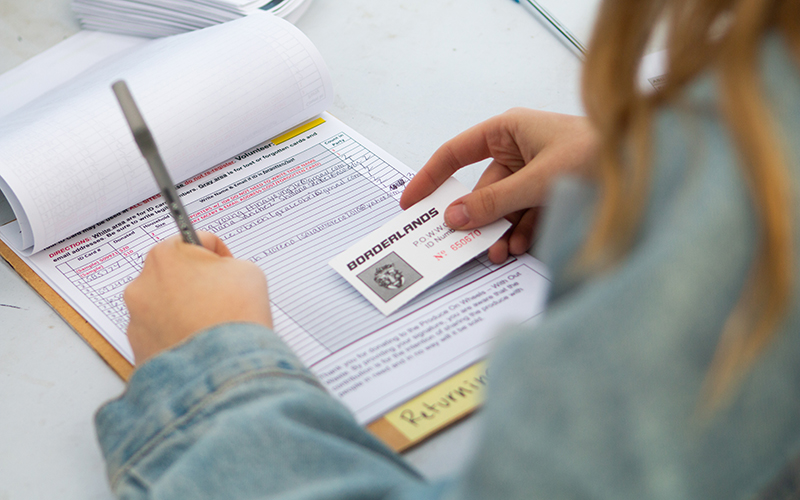 Volunteer Sarah Bentley registers people at the Tempe P.O.W.W.O.W. Borderlands Produce Rescue does not require anyone to apply or qualify for financial aid. 'People prove their need? I don't think so,' CEO Yolanda Soto said. 'We're not a traditional food bank; we never have been.' (Photo by Delia Johnson/Cronkite News)

The bounty of Mexico

Although the produce is sold in Tempe, Glendale, Mesa and Tucson, the program is based in a warehouse near Nogales that is remote enough that wild horses graze nearby. There, Borderlands Produce Rescue CEO and President Yolanda Soto explained how the group operates.

The organization recently stopped receiving government funding and, as a result, leaders changed its name from Borderlands Food Bank. Soto said the organization no longer is a food bank because she and her team did not agree with the requirements that come with government funds, such as requiring proof of financial hardship.

“People go to places like ours because they’re in need,” she said. “And then you have to sit there and ask them to prove their need? I don’t think so. It’s not a good thing, and we don’t like it.”

Soto, the organization’s leader since it was launched 20 years ago, also severed ties with federal funding because it did not allow undocumented people or residents of Mexico to receive their services.

“These people are our neighbors,” she said. “We want to be able to share.”

“I’ve gone to places where a few people have depression and their family just abandons them,” she said. “A lot of them are alone and just feel empty. They start talking to you about their problems and any little thing that they converse with you, they feel better. ”

In Mexico, where the majority of produce is grown, climate change is affecting the variety of produce that is sent across the border, Soto said. Freezes and hurricanes have ruined crops in the field. That lack of variety sometimes can deter people from shopping at P.O.W.W.O.W.s, she added.

Without sufficient funds, she said, the group, which is funded by grants and private donations, will have to start cutting host sites.

“People need to understand that if you don’t have 10 or 15 varieties at the market you should still go because your obligation is also to help curb food waste,” she said. 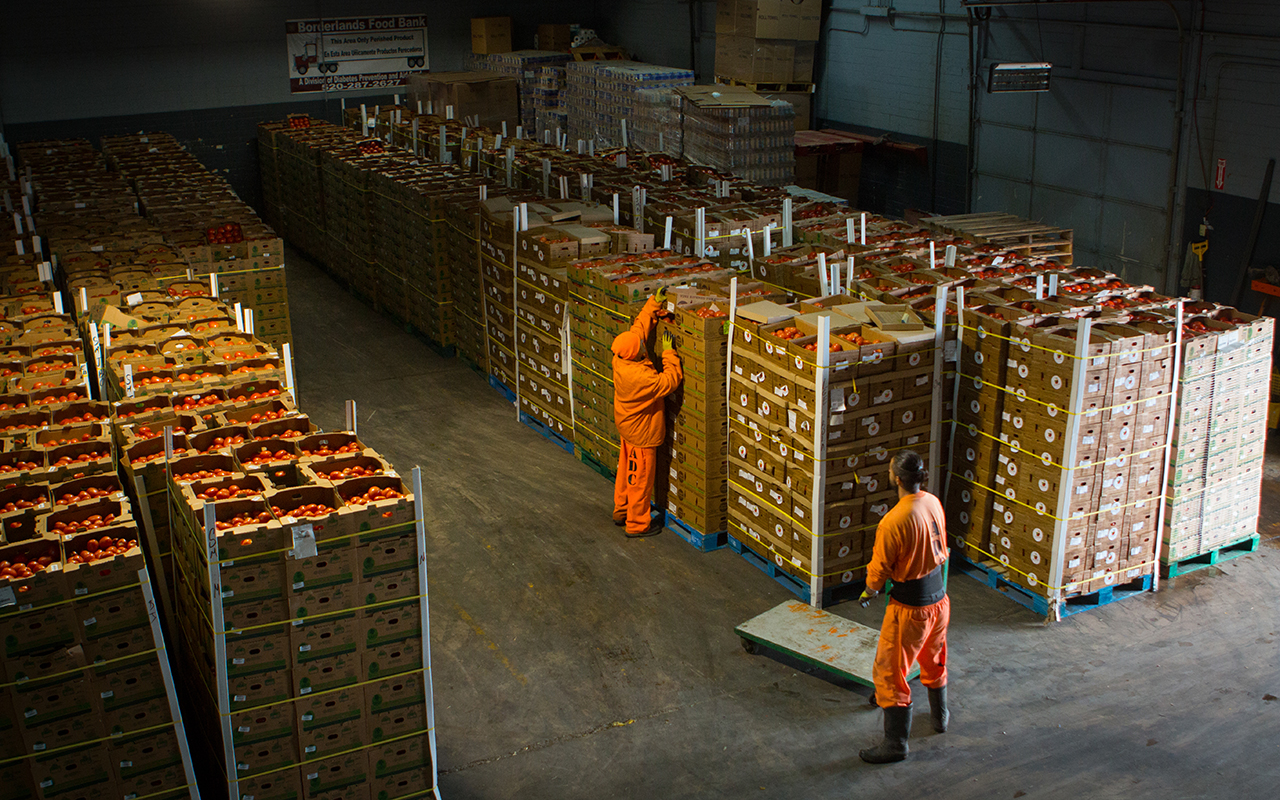 Inmates from Tucson help with all aspects of the production at the warehouse, including sorting and preparing produce for shipment. Borderlands Produce Rescue's partnership with the Arizona Department of Corrections helps the inmates gain valuable skills while advancing the food rescue cause. 'Without them, we cannot do what we do. We cannot distribute, rescue the amount of poundage that we do,' CEO Yolanda Soto said. (Photo by Delia Johnson/Cronkite News) 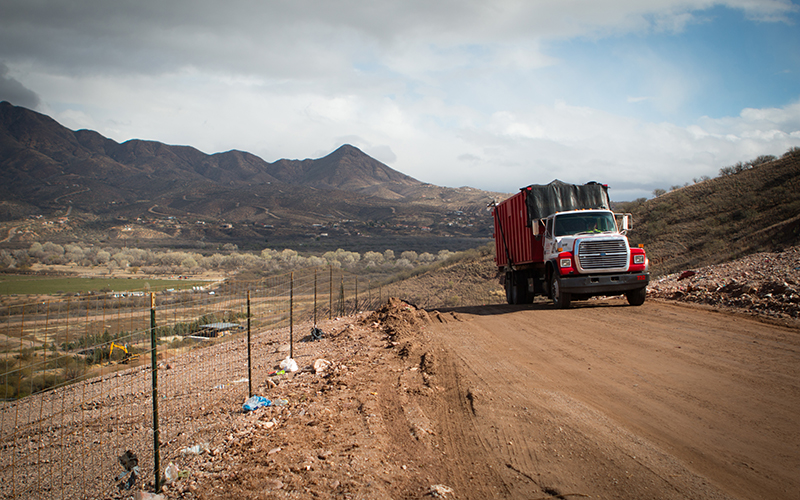 Produce that goes bad before it can get distributed ultimately ends up in landfills, like the Rio Rico Landfill in Nogales. Landfills play a big role in methane gas emissions. In addition to feeding the needy, Borderlands Produce Rescue also aims to ensure that as much produce as possible is consumed rather than being dumped. (Photo by Delia Johnson/Cronkite News) 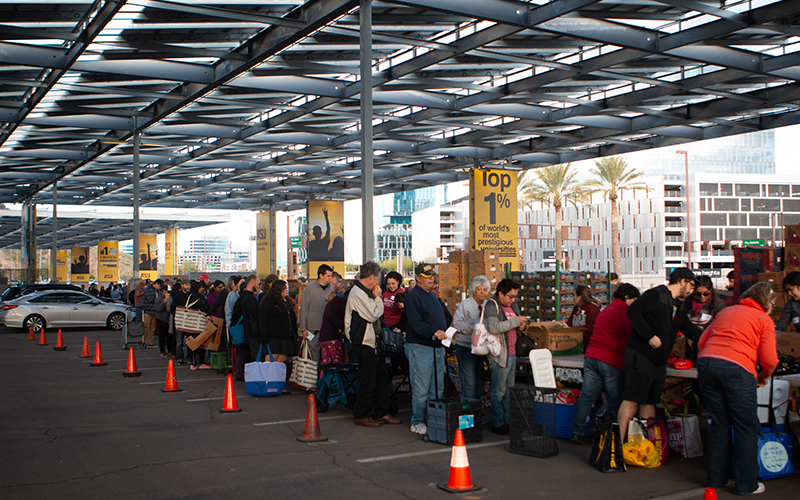 A long line forms on a Saturday morning to register and receive produce in Tempe at a Borderlands Produce Rescue pop-up market. About 92,000 households register each year to shop at the markets. (Photo by Delia Johnson/Cronkite News)