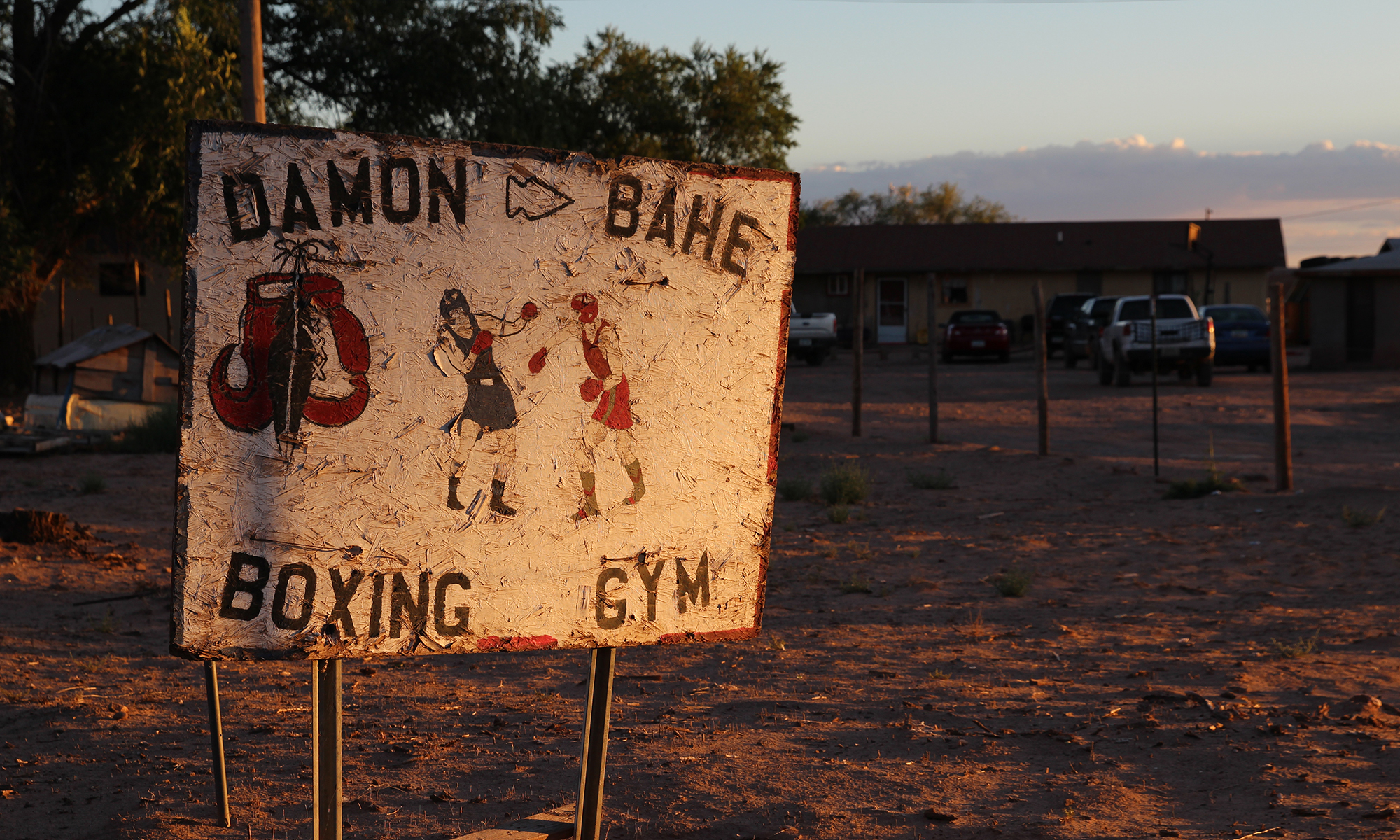 In and around this small town on the Navajo Reservation, house numbers rarely exist. And Google Maps can’t quite explain that, off Indian Route 7, less than a quarter mile west of the Chevron gas station, there’s a dirt road that, after three right turns, leads to the gym and another sign, this one warning “Beware of Dog.”

The modest gym, which was built on a patch of land once dedicated to raising goats, now is dedicated to the Olympic-size dreams of a 14-year-old Navajo girl, Mariah Bahe.

These dreams take root in reality. Bahe is the reigning Arizona State Junior Olympics champion and qualified for the 2018 Elite and Youth National Championships and Junior and Prep Open in Salt Lake City. She competes Friday in the 95-pound junior class for females.

But on this day, Bahe polishes her boxing skills in a compact space about the size of a one-bedroom apartment. To one side is a fun-size ring with ragged ropes and a carpet floor. Squeezed into the remaining space are a speed bag, several heavy bags and other expected pieces of boxing equipment.

Like many boxing gyms, this one has walls decorated with trophies and newspaper clippings detailing the ring exploits of the Bahe family.

This is where Mariah and John Calvin Bahe Jr. – her father and trainer – sweat through their boxing routine six days a week. It starts with a two-hour warmup. She jogs through cardio workouts, side-steps around the gym and weaves past punching bags before she climbs through the ropes and throws a punch.

There is some dispute over when, exactly, Mariah began her study of the Sweet Science. As she remembers it, she began boxing at 6. Her dad counters that she was 7. But to the Bahe family, the journey’s beginning isn’t as important as where it will lead.

Mariah Bahe is the reigning Arizona State Junior Olympics champion and qualified for the 2018 Elite and Youth National Championships and Junior and Prep Open in Salt Lake City. (Photo by Isaac Colindres/Cronkite News)

The youngest of five children, Mariah is the only girl. Her brothers boxed. Other boys came to the gym to train, too.

“I don’t have no fee for whoever walks through that door,” Bahe said of his gym. “I do ask for donations … but when they start, I ask them to bring nothing at all, just to work out.”

Mariah wanted to join the boys in the ring. The first fight she had to win was with her father. The ring, he said, is no place for a girl.

A familiar tale followed. She encountered prejudices that threatened to block her path before she ever laced up the gloves. But Mariah would not be deterred.

“All my brothers were in here (boxing) and I was inside with my auntie … and I thought that I could do anything that boys could do,” Mariah said.

That sort of fight has run in the family for what is now four generations.

Lee Damon, Mariah’s great grand-uncle, took up the fight game while serving in the military during World War II. The sport would serve as a cornerstone of his life.

Damon put together boxing teams all over the United States, training fighters in one city before moving to the next and assembling teams as he moved state-to-state. But as age caught up with him, Damon passed the family legacy to his nephew, John Calvin Bahe Sr., better known as Cal, and Damon Boxing metamorphosed into Damon-Bahe Boxing.

“My dad basically claimed it saved his life,” John Jr. said of Cal. “He did a lot of crazy stuff back then, and then he got into boxing. He toned it down, and took a lot of that anger and anxiety out (in the ring).”

Cal relocated the family to Arizona with Damon by his side more than 20 years ago. At the time, Chinle had two boxing gyms and Damon-Bahe was the newcomer in town. Damon died years ago, but his fighting legacy lives on through his family, especially in Mariah.

Damon-Bahe now is the only gym in town and one of a few on the sprawling reservation, home to the largest Native American population in the U.S. At more than 27,000 square miles, the reservation is larger than Ireland and 10 of 50 states. It spreads from northeastern Arizona into parts of Utah and New Mexico.

But a vast land does not equate to a booming economy. Poverty is common among the Navajo, many of whom have been hit by the one-two punch of drug and alcohol abuse. And it starts young. A 2014 study by the National Institute of Health revealed a much higher prevalence of drug and alcohol use in 8th- and 10th-graders compared with national averages.

It’s from this humbling environment of hardship and temptation that the Bahe family arose. Each of them can recount incidents of family members, friends or classmates whose lives were buckled by the seductions of substances. Boxing is their escape.

“It’s kind of big here, because my uncles do it, and they really do it a lot,” said James Bahe, Mariah’s brother. “I think (boxing) really helped us because it gave us something that we could do outside of that.”

Mariah is aware of the potential pitfalls. She has done her best to sidestep them, her family says, and as a freshman she was one of the best runners on Chinle High School’s varsity cross country team. She also works as a DJ at events, including school dances. It is another hobby she has inherited from her dad, who has been working as a DJ in his spare time since the 1980s.

However Mariah remains focused on her boxing career with her sights set on the Olympics, possibly in the 2024 Summer Games in Paris.

As she trains, there is a sense that she is the continuation of Damon’s vision, the product of more than 50 years of boxing heritage.

Her father eventually came around, seeing the fight in his daughter and sincerity in her promise to work hard to become great. At age 6 (or was it 7?) Mariah got her opportunity, and she has run with it ever since.

She won her division in Region 9 of the USA Boxing 2017 Junior Olympics and placed third this year. She captured the 85-pound division at the USA Boxing Western Elite Qualifier Regional Open Championship held in Albuquerque, New Mexico.

She hopes for a strong performance this weekend in Salt Lake City.

The foundation for her boxing career was laid 22 years ago when the Damons and Bahes, with the help of friends, built the tiny gym where a goat corral had stood. One of John Bahe’s mottos can be found on a sheet of construction paper tacked to the wall.

Another wall chronicles Mariah’s accomplishments as a youth boxer. Above one of her most prized possessions – her framed Junior Olympics Championship certificate – is a poster for a the 2004 film “Black Cloud,” starring Tim McGraw and Peter Greene.

The film received the Best Picture Audience Award at the Phoenix Film Festival and is based on the life of Lowell Bahe, John’s brother, who won two USA and four All-Indian National Championship belts by age 16.

John Bahe, though once reluctant, has become his daughter’s biggest advocate, helping Mariah pursue an unlikely family story that is unfolding in a remote corner of Arizona. No Navajo has won an Olympic medal.

Back when Lowell Bahe was fighting, Cal was the trainer leading the Damon-Bahe club to national success. And for the first few years that Mariah began boxing, Cal helped train her, until his death in 2015. That’s when John, now 48, took over.

“My family legacy is getting bigger, a lot bigger than I ever imagined when we first started,” he said.

During training sessions, John has the vocals of J Cole, Logic, and Usher vibrating through the gym, filling Mariah with energy and drowning out outside noise, save for John’s coaching tips and teasing from her four brothers, all of whom take turns sparring with their sister. 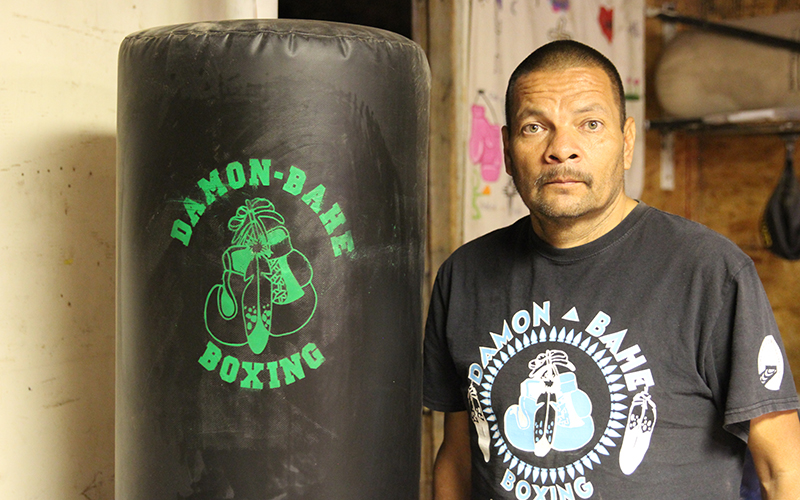 John Bahe originally told his daughter that she would not fight because the ring was no place for a girl. (Photo by Isaac Colindres/Cronkite News) 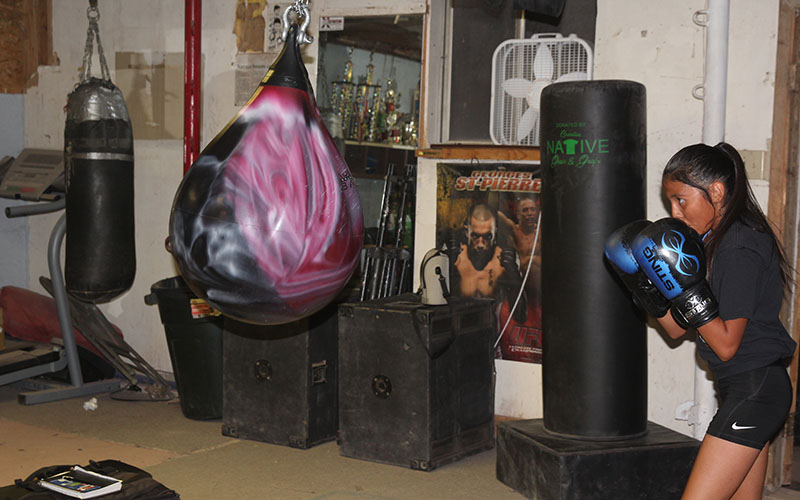 Mariah Bahe, 14, is trained by her father, John Bahe, in a gym the size of a one-bedroom apartment. (Photo by Isaac Colindres/Cronkite News)

The Bahes are a close-knit family, sharing knowledge and love. John represents that, as he credits his wife, Elvina, and his whole family for training Mariah.

“Everywhere we go, we’re always wearing our Damon-Boxing shirts. I always tell my kids, ‘You’re part of this team,’ ” Elvina said. “I tell them, ‘You represent this name. You represent a long line of Damon-Boxing, and with that comes a huge honor.’ ”

Fall afternoons in Chinle are often cool, like the air that fills Mariah’s lungs as she prepares for her warmup routine. She bounces her weight from right foot to left, toe-to-toe, all 95 pounds of her gracing the ring, whose four corners have become like a second home.

John acknowledged that it is becoming more difficult to keep up with a tireless teenager in her training sessions.

“Her mindset separates her,” he said. “Maybe it’s because when she was a kid I told her she couldn’t do it. … She’s proven me wrong big time. She’s done more in this sport than I ever could have. She’s more dedicated than I ever was.

“As long as she has that dream and that thought in her mind that ‘I’m going to be in the Olympics,’ then I have to make sure that dream comes true.”

Mariah is right where she has always wanted to be, nurtured in the same boxing environment that has embraced three generations of Bahes. Her father is in her corner. Her grandfather in her mind. And the people she represents as she chases her Olympic dream are in her heart.

It is a dream worth the fight for Mariah.

“I just want to show that a Native girl can do anything that she sets her mind to, and she can accomplish anything,” she said.