Trump wants to revoke birthright citizenship, but can he act on his own?

The United States Constitution’s 14th Amendment grants citizenship to those that are born on U.S. soil. (Photo by Lynn Melchiori/Creative Commons)

PHOENIX – Can a president change the Constitution by way of executive order? President Donald Trump thinks he can, saying in an interview this week that he intends to revoke the 14th Amendment’s guarantee of birthright citizenship. 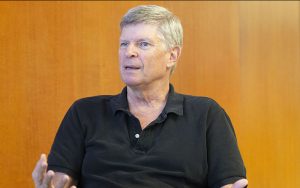 Phoenix lawyer Dan Barr says what the president wants to do—amend the Constitution by way of executive order—isn’t legal. Barr says Trump’s comments were made to earn support from his base. (Photo by Hana DeMent/Cronkite News)

Attorney Dan Barr in Phoenix is among constitutional scholars who say such a move is impossible – Barr likened it to ordering the sun to stop rising.

“You can definitely do it with an act of Congress,” Trump told Axios on HBO in an interview that’s to run Sunday, “but now they’re saying that I can do it with just an executive order. We are the only country in the world where a person comes in has a baby and the baby is essentially a citizen of the United States for 85 years with all of those benefits, it’s ridiculous. And it has to end.”

Birthright citizenship is granted in the first sentence of the 14th Amendment: “All persons born or naturalized in the United States, and subject to the jurisdiction thereof, are citizens of the United States and of the state wherein they reside.”

When the 14th Amendment was ratified in 1868, it was meant to protect former slaves. One of three amendments passed during the Reconstruction era, it since has been used to protect Americans against an assortment of infringement cases.

Barr, a litigator at Perkins Coie in Phoenix, says what Trump wants to do isn’t possible. He suggested Trump’s comments were made to earn support from his base.

“Donald Trump can no more amend the Constitution by an executive order than he can order the sun to stop rising in the East in the morning,” he said.

Whether Trump moves his plan forward to enact an executive order is yet to be seen. He has made no mention of it since Axios released part of the interview.

‘It changes the subject’

“I am the kid President Trump is talking about,” said Jamie Casap, 50, of Phoenix, who was born in New York City when his mother was studying on a student visa. She came to the U.S. from Argentina in 1965 and stayed illegally but eventually gained citizenship under Ronald Reagan’s amnesty program.

“He’s thinking about how to rally up his base,” he said. “He’s hitting all the hot issues. We were warned about this. It changes the subject.”

Birthright citizenship benefits the United States, Casap said, adding, “I have college degree, I have a master’s degree, I work at Google and I pay a lot of taxes.”

‘Trump is … getting things done’

Sean Donnelly, 33, of Phoenix, disagrees. He said U.S. immigration policy must change so that wages can rise.

“It won’t happen with third-worlders pouring into (U.S.) labor markets,” he said.

Donnelly’s parents immigrated to the U.S. from Scotland. His older brother was born before their parents got full citizenship.

“Love him or hate him, President Trump is actually getting things done,” Donnelly said.

“I’ve never seen a president try and accomplish so many milestones in my lifetime despite the entire media machine seemingly picking apart his every move.”