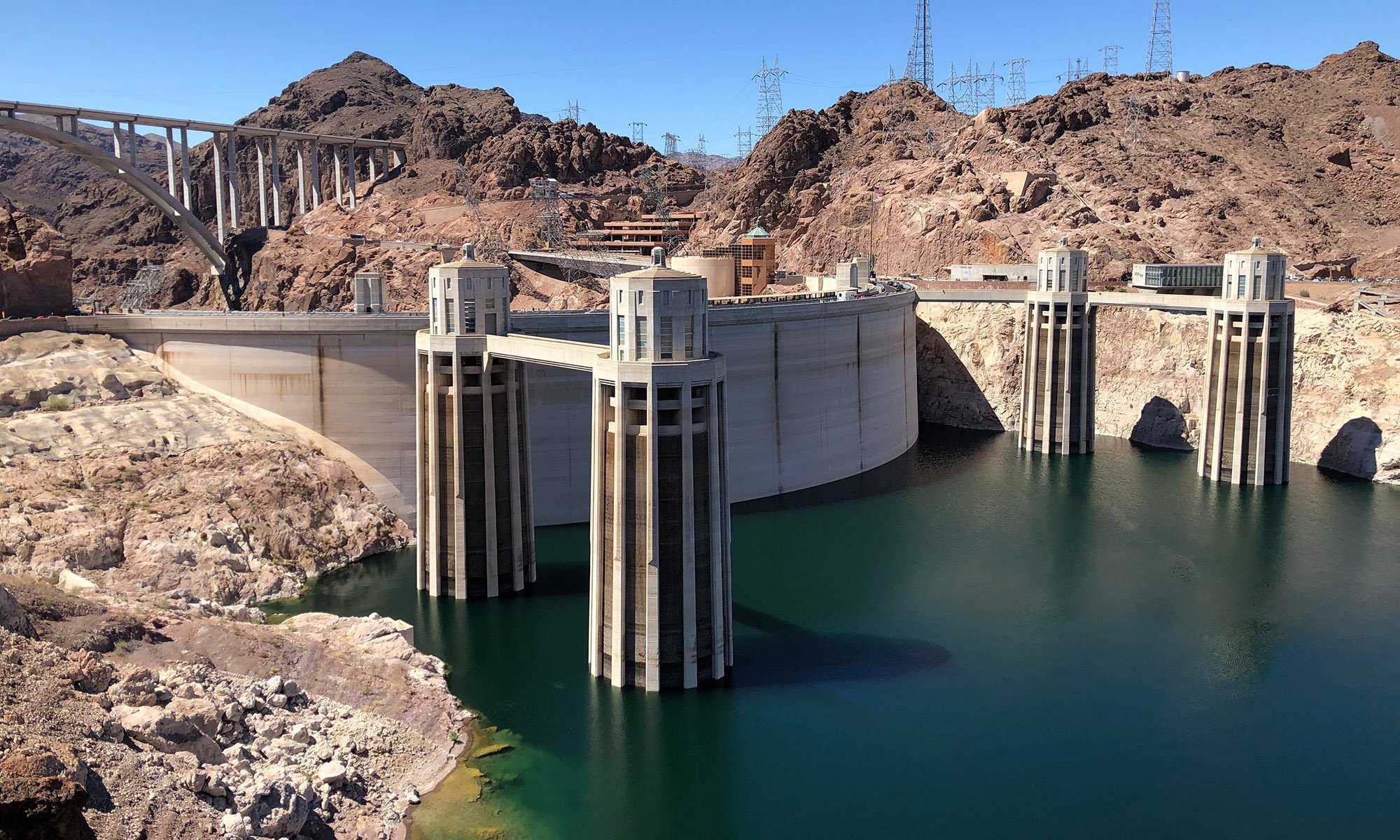 Hoover Dam’s penstock towers take in water from Lake Mead and use it to generate electricity. With less water, the dam generates less electricity, so officials replaced some of the dam’s turbines to increase efficiency. (Photo by Jordan Evans/Cronkite News)

LAKE MEAD – Swaths of mineral-stained white rock, more than 100 feet tall, mark Lake Mead’s basin, punctuating decades of drought in the Southwest. At one point, the white rock was underwater.

If the lake levels dip too low, Arizona could lose about a seventh of its annual water allotment to the Central Arizona Project, which supplies much of the state’s water. Water experts said that could lead to farmers and homeowners paying higher water rates and prioritize Arizona behind neighboring states in CAP water availability. Conservation may be key to keeping water in everyone’s taps in Arizona.

Still, drought has some advantages. Visitors to Lake Mead this fall were excited about the rocky islands and hundreds of miles of beaches that otherwise would be submerged.

“If you want to go to a nice sandy beach and hang out with 25 boats and 150 people, then the water level isn’t an issue,” said Clifford Denning. He and his wife, Cheri, stood on the shore of Lake Mead, which they have been visiting for seven years.

“We encourage anyone to come out, enjoy it while you can. It’s here, it’s great, it’s beautiful,” Cheri Denning said.

The dark side of low-water levels could mean cutoffs to Arizona, according to the U.S. Bureau of Reclamation.

The bureau, responsible for divvying up Lake Mead’s water and electric power, in August reported a 57 percent chance that Lake Mead’s water levels would be so dismal in 2020 that Arizona and Nevada would face cutoffs. If the water level falls to 1,075 feet above sea level, a shortage declaration would be issued and cuts would be scheduled.

Arizona water experts said mainly farms and rural areas, rather than cities, could be restricted. California, despite having the rights to largest allocation of Lake Mead’s water, would not undergo a reduction under a multistate agreement. 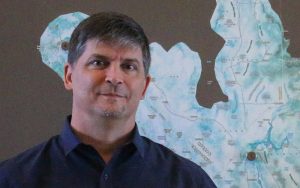 Dan Bunk of the U.S. Bureau of Reclamation helped predict a possible shortage in Lake Mead by 2020. (Photo by Corey Hawk/Cronkite News)

Dan Bunk, a river operations manager with the bureau who helped create the simulation that predicted a shortage, said lower precipitation and higher temperatures helped created the nearly two-decade-old drought.

“There’s a sense of concern and urgency by water users throughout the basin,” Bunk said.

In September, the water level was 1,078 feet above sea level, according to the bureau.

Cutoffs will begin if water levels dip 3 feet lower in December, with restrictions getting worse as water levels drop even further. Those initial cutoffs would reach rural areas that rely on CAP water.

If Lake Mead’s water level falls below 1,050 feet, Arizona would lose an additional 80,000 acre-feet of water, according to the Bureau of Reclamation.

Arizona cities wouldn’t be forced to take a cutoff, said Tom Buschatzke, director of the Arizona Department of Water Resources. Still, cities might impose some water rationing as a preventative measure, he said. 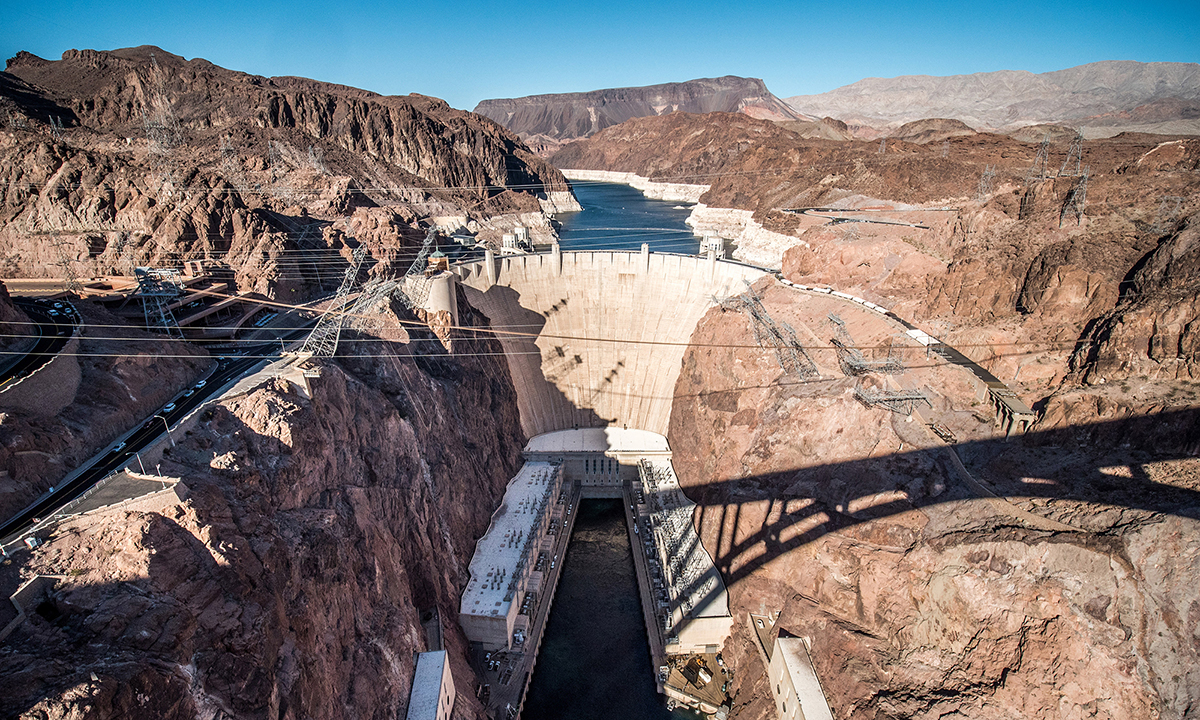 Sarah Porter, director of the Kyl Center for Water Policy, said consumers could see a rise in municipal water rates.

She said Pinal County, which includes the far Southeast Valley, would be most affected by cuts because of CAP priorities. But bigger cities are already considering policies that would reduce their water use and float their water allotments over to Pinal County.

That would mean how Arizona uses and sources its water would change, Porter said. Arizonans would find ways to more efficiently use water and the state might rely more on groundwater.

He said Arizona officials are collaborating with California, Nevada and Mexico to develop a drought contingency plan that would prevent a more severe round of cutoffs.

Buschatzke said Arizona receives 46 percent of the water Lake Mead supplies to states, compared with Nevada’s 4 percent and California’s 50 percent. Although California receives the largest allotment from Lake Mead, agreements forged years ago give it priority.

Porter said political pressures played a large part of who would receive water cuts in the event of a shortage.

“There might have been reasons why California didn’t think Arizona should be taken very seriously,” Porter said. “As a water user, we didn’t have nearly the population and the developed industry that California had.”

But that isn’t the whole picture. California, the most populous state in the country, has some disadvantages compared to Arizona when it comes to storing water, Porter said.

“California has not had the luxury of other water it could bank in the aquifers,” he said. “So they have a need for it that is more immediate.”

Arizona has not needed its entire allocation of water from Lake Mead, Porter said, so CAP and the Arizona Water Banking Authority have used the excess to recharge aquifers. Since the 1990s, he said, the state has stored 3.8 million acre-feet of water – enough to cover all of Phoenix 11 feet deep.

“All of the water banking goes to show that there is some give in the system,” Porter said. 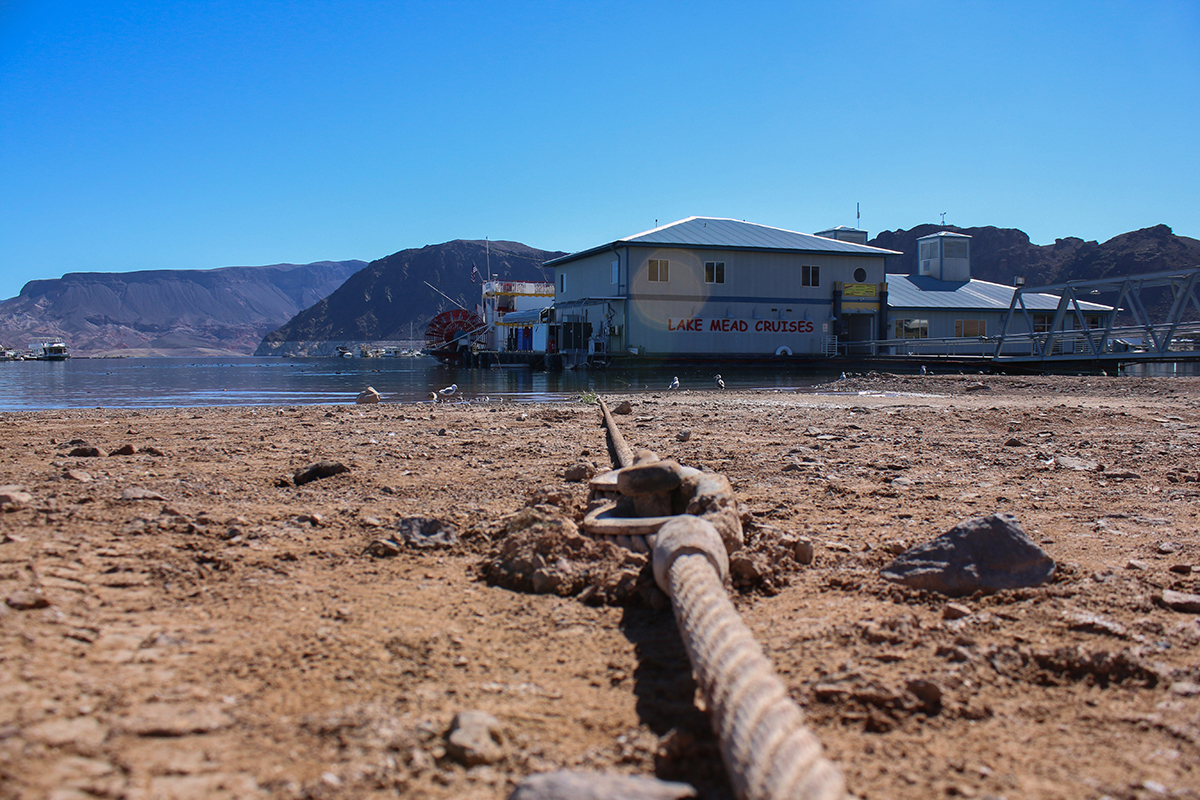 Marina owners at Lake Mead have to adjust ropes like these to secure their docks when lake levels fluctuate. (Photo by Corey Hawk/Cronkite News)

The recreational opportunities brought on by drought at Lake Mead National Recreation Area also come at a cost – $2 million in updates for every 10-foot drop in the water level.

Most of the cost comes from the materials and engineering needed to extend boat ramps, but any large fluctuation in lake level requires moving signs and tightening the ropes that keep docks within reach of the shore.

“With every change, there’s a new fun thing to do here,” said Christie Vanover, public affairs officer for the recreation area.

About the size of Delaware, the recreation area includes an abandoned Mormon village and a slot canyon. Both usually are submerged, Vanover said.

But considering the Bureau of Reclamation’s prediction, they are likely to stay above water, at least for the next few years. Time enough to enjoy drought’s upside.

CORRECTION: A previous version of this story included misinformation. The article included a misspelling of the name of the organization Sarah Porter directs. It is the Kyl Center for Water Policy at the Morrison Institute for Public Policy. The error occurred in the 15th graf of the original. The story has been corrected, but clients who used earlier versions are asked to run the correction that can be found here.