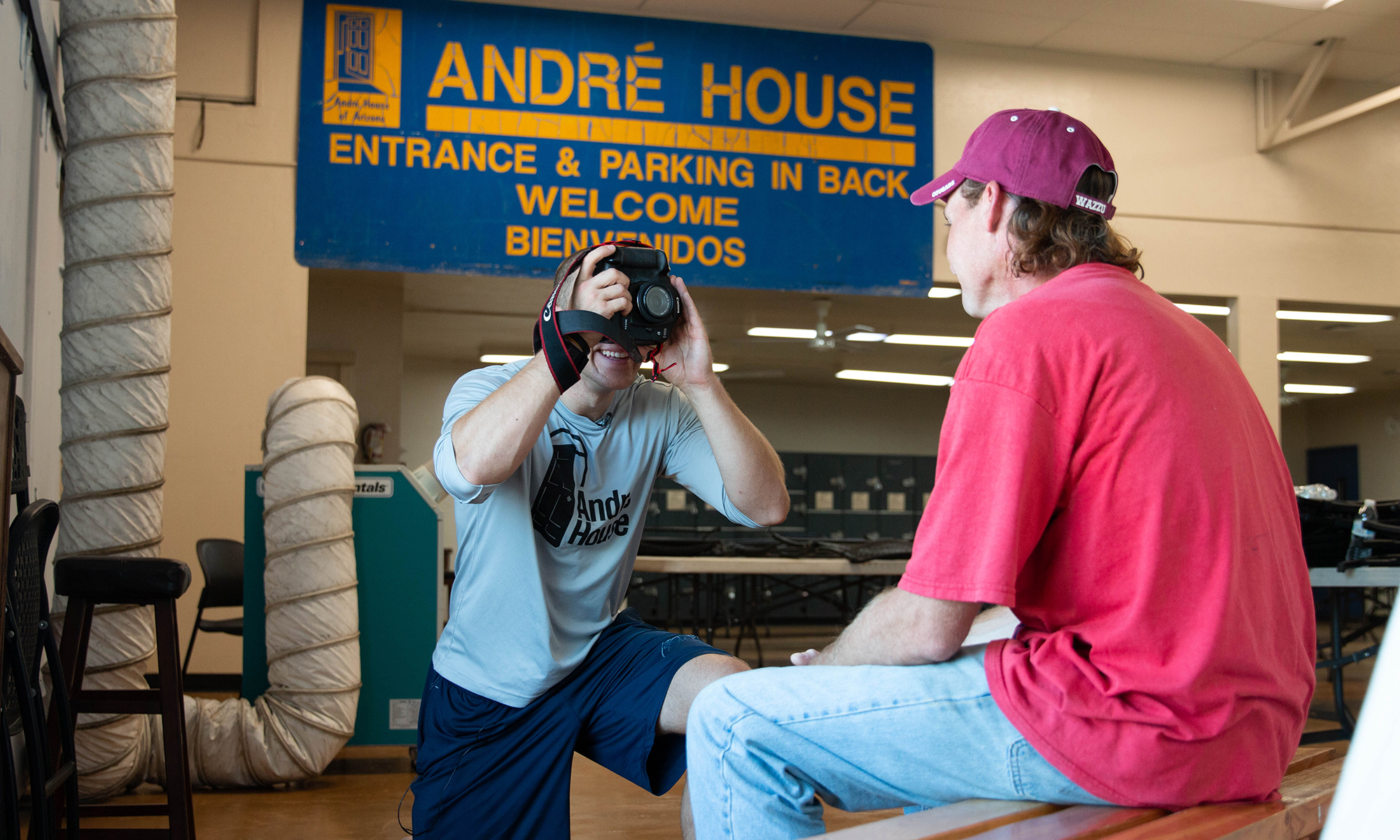 Samuel MacDonald takes a portrait of William Decker for the Photo Project at André House. He started taking photos of guests in 2015. (Photo by Carly Henry/Cronkite News)

PHOENIX – Black-and-white portraits of people without homes, people who often are ignored and misunderstood, hang on a wall at André House. Each photo reveals a single moment in a singular life. Contentedness juxtaposed with melancholy. Silliness tucked beside seriousness.

Samuel MacDonald started shooting the portraits in 2015 when he worked at André House, fitting them in among his job duties for the “house of hospitality” in downtown Phoenix, which offers laundry services, meals and other resources to people who are homeless. He has since moved on to a different career, but the people draw him back.

He has learned about Terry Clark and his dog, Dirt, and Wilfredo Gonzalez, whose journey to happiness plays out in three portraits. But MacDonald said his photos have meaning beyond the images.

“This is someone who is worthy of someone taking the time to say, “You are someone who is beautiful. I would like to have a picture of you,'” Samuel MacDonald said.

“This is someone who is worthy of someone taking the time to say, “You are someone who is beautiful. I would like to have a picture of you,'” MacDonald said.

The stigma of homelessness wears on people’s psyches, MacDonald said. Most people sit down for formal portraits to document their school years, graduations, weddings and holidays, but people who are homeless may not have the money, the opportunity or the occasion to have their picture taken.

The Photo Project, as it’s called at André House, is MacDonald’s way of documenting the basic humanity that belongs to people who may have lost everything else. 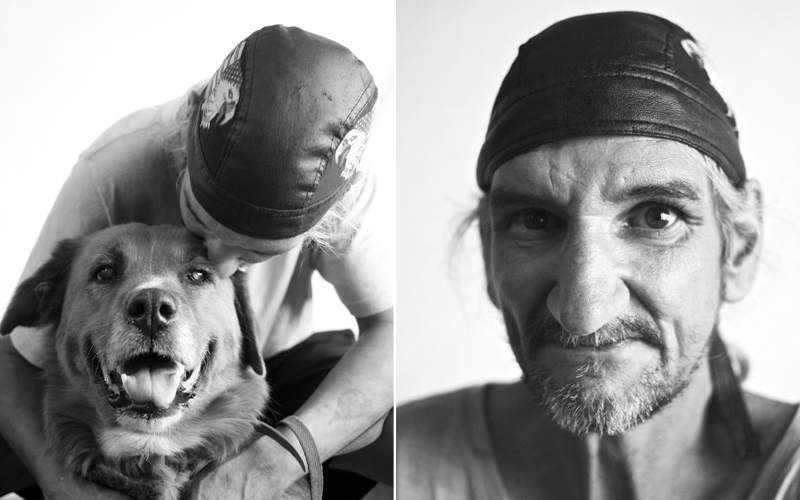 Terry Clark brought his best friend, Dirt, to his photo shoot. The portraits are the only photos Clark has of the two of them together. (Photos courtesy of Samuel MacDonald) 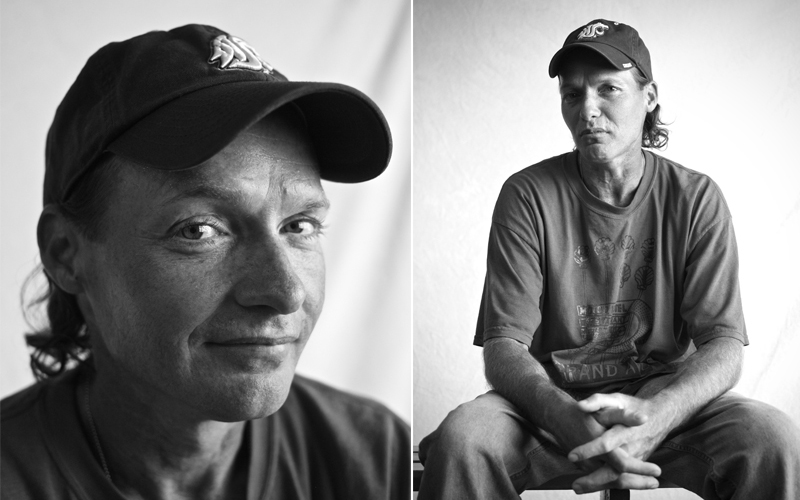 William Decker, who moved to Arizona from Oklahoma, is among the 100 people who are part of the Photo Project. (Photos courtesy of Samuel MacDonald)

Turning a college concept into a photo installation

The portraits idea arose from a black-and-white film photography class MacDonald took his senior year of college. His teacher suggested he take portraits of six people experiencing homelessness and print two for his final project – one to present in class and one to give as a Christmas present to the person in the photo.

MacDonald was too busy that semester to take it on, but the idea stayed in the back of his mind. In 2014, he moved from New Hampshire to Arizona for a yearlong work program at André House.

“After working at the André House for a couple months and working with the people who are experiencing homelessness, I realized everyone’s got a story,” MacDonald said. “Everyone has this really intricate background that probably would be much more interesting if you really dove into it, instead of just looking at the surface.” 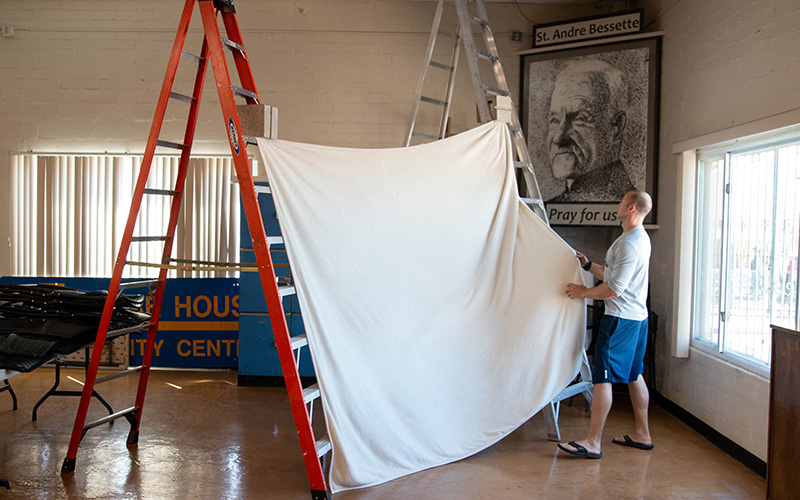 He began taking photos of visitors and volunteers at the center in 2015.

Three years later, MacDonald estimates he has shot portraits of nearly 100 people in his makeshift studio in the dining hall. On a September afternoon, he draped a sheet over two ladders placed in front of a window to let in natural light.

Terry Clark walked in, ready to have his picture taken with Dirt, his best friend, who jumped up and licked his face.

“God made dirt and dirt don’t hurt. That’s why I named her Dirt, because she’d never hurt anyone,” Clark said.

In the 10 years Clark has had Dirt, this is the first photo they’ve together.

MacDonald, between shooting photos, inquired about Clark’s life, pulling the camera from his face to ask questions and listen to the answers.

Clark told him about his father, who was in a coma for a long time but then woke up.

With arms stretched towards the ceiling, Clark shows MacDonald how his father reached into the air, told his family he loved them – and died.

After MacDonald was done shooting photos, including headshots, Clark chose the ones he liked – all of them with Dirt. They shook hands, Clark and Dirt went on their way, and MacDonald got ready for the next shoot. 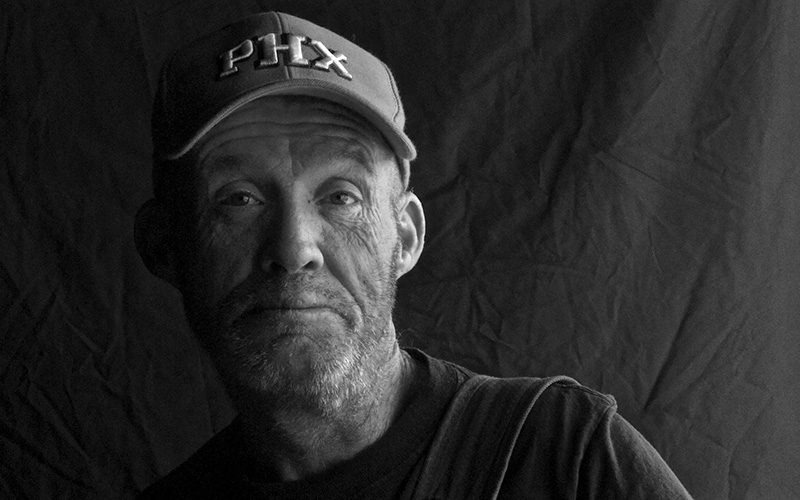 Even though MacDonald no longer works at André House, he tries to visit the center every morning before going into work at the Office of the Medical Examiner of Maricopa County. He sets up the “studio” for portraits every few months.

MacDonald works in forensics, the field he studied in college. As a death investigator, his work is similar to that of a crime-scene technician who examines deaths that may not be of natural causes.

“You’ll see someone that you get to know. You love them and care for them. Then, you’ll come into work the next day and you find out they’re gone,” he said.

People may leave for a number of reasons. Someone might find housing or leave the area. Some of those pictured on the wall have died.

“There are a couple guests who unfortunately have passed away over the couple years I’ve been here,” he said. “It’s nice to have something to remember them here on the wall.”

Later, pointing at a photo on the wall, MacDonald told the story of a man people at the center called Don “the Butler.” Don was a goofy man who told funny jokes and helped unload donations when he could. When MacDonald took his photo, Don told him he planned to send his copy to family living in another state.

One day at work, MacDonald received a call about a man who had died. When he arrived at the scene, he saw it was Don.

“It was unusual,” MacDonald recalled, suddenly more somber. “At the same time, it was comforting to know that I could kind of take care of him at the end of things.”

He looked at Don’s photo again.

Wilfredo Gonzalez was homeless when he came to André House, but the Guatemalan immigrant eventually was hired to perform maintenance at the center. He and Tom Doyle, André House executive director, were all smiles in July. (Photo courtesy of Samuel MacDonald)

Some people appear in multiple portraits, offering a glimpse of different points in their lives.

Gonzalez was homeless when he came to the center.

In the first photo, taken soon after he found André House, a somber Gonzalez looks at the camera. An immigrant from Guatemala, he had been a welder for several years but wound up on the streets after getting a DUI.

Soon after coming to the André House, he began work as a volunteer maintenance man. The second photo shows him in sunglasses and the Caribbean sun hat he uses for outdoor work, a tiny smile flitting across his face.

“He was so naturally motivated. He’s a hard worker and extremely talented mechanically and technically. He just wanted to help and he said that a number of times,” said Jay Minich, director of finance and administration.

Minich said the timing was perfect. The center was looking for someone to fill a maintenance position and Gonzalez’s experience fit the bill.

The third photo shows a grinning Tom Doyle, André House executive director, with his arm around the shoulders of a ball-cap clad, smiling Gonzalez. In July, he was hired to work full-time as a maintenance man.

Gonzalez said André House helped him change his life. He does not drink or take other drugs, has become a Christian and finally has a place to live.

“These people in this beautiful house, they supplied me food, clothes and friendship,” Gonzalez said. “These are good people. They give their hands to everybody who needs it, no matter who they are or what color they are.”

Minich said the photo wall, full of the faces of workers, volunteers and the people André House has helped, showcases the center’s mission.

“It’s the concept of one community,” Minich said. “There doesn’t need to be a demarcation or barrier based on economic status or lifestyle.”

Minich said the project helps give people experiencing homelessness a sense of belonging.

“The genesis of it was that a lot of our guests are used to being talked at, forced to wait in line and not being welcome in a lot of places,” Minich said. “Prioritizing them and giving them that feeling the rest of us have – that they are appreciated and they’re not at the back of the line, is important.”