The 5.5-mile light-rail extension would assist the 28 percent of people in south Phoenix who depend on public transportation, according to the Maricopa County Department of Public Health. (File photo by Jordan Evans/Cronkite News) 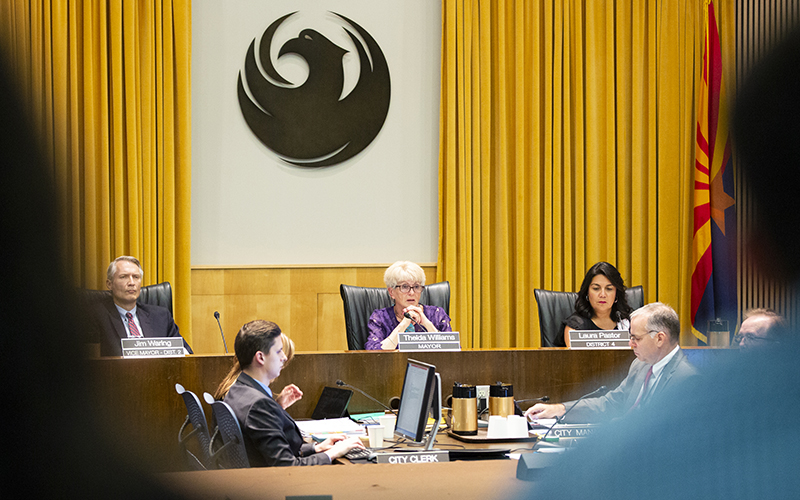 Phoenix Mayor Thelda Williams listens to testimony before the City Council’s vote on the future of light-rail expansion. (Photo by Anya Magnuson/Cronkite News) 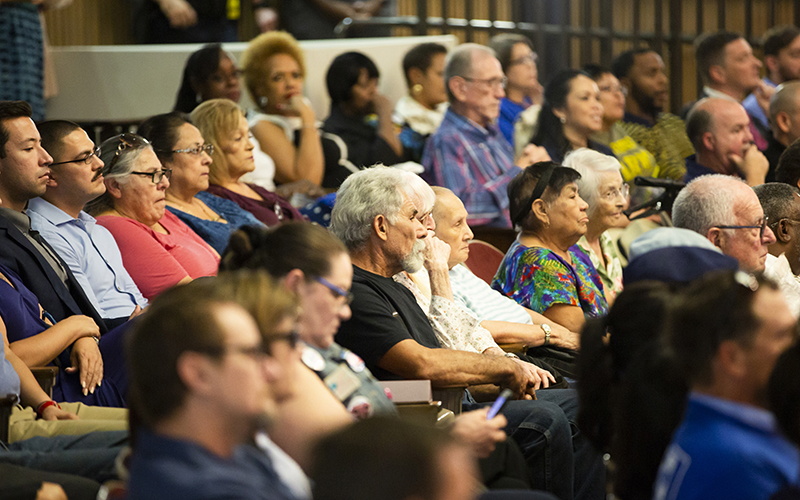 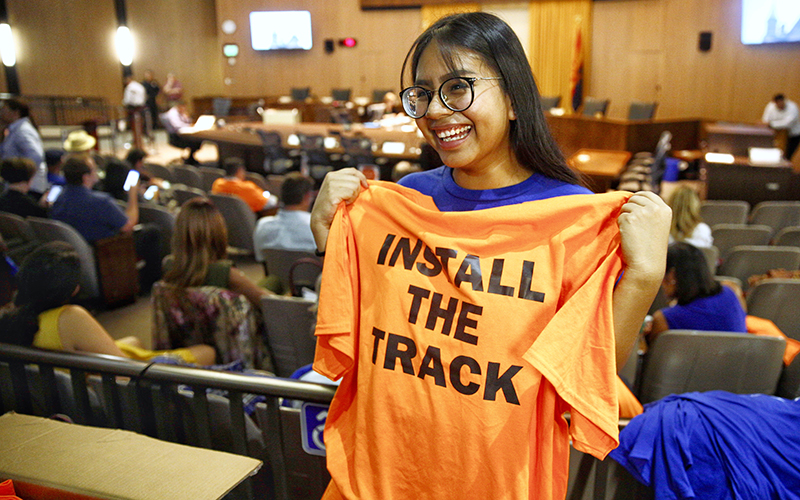 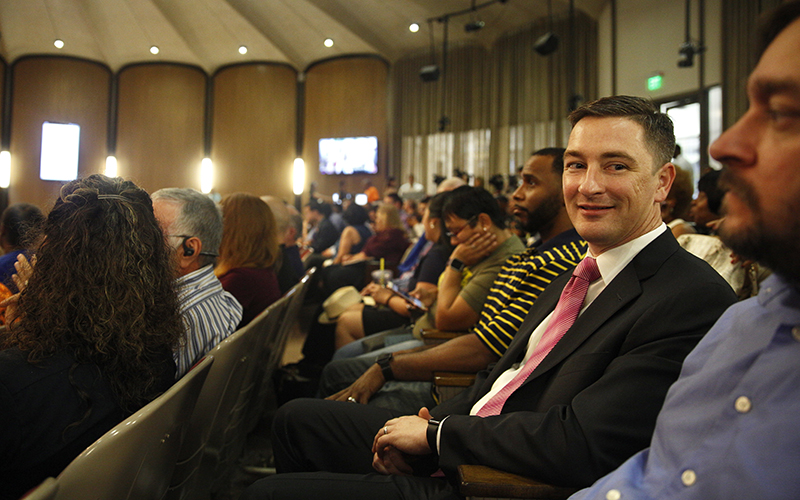 Nicholas Sarwark, Phoenix mayoral candidate, spoke against the light-rail expansion during the public comment portion of Wednesday’s meeting. Afterwards he tweeted, “Valley Metro is in a hurry to step over the corpses of the small business they will kill for the potential of federal grant money.” (Photo by Anya Magnuson/Cronkite News) 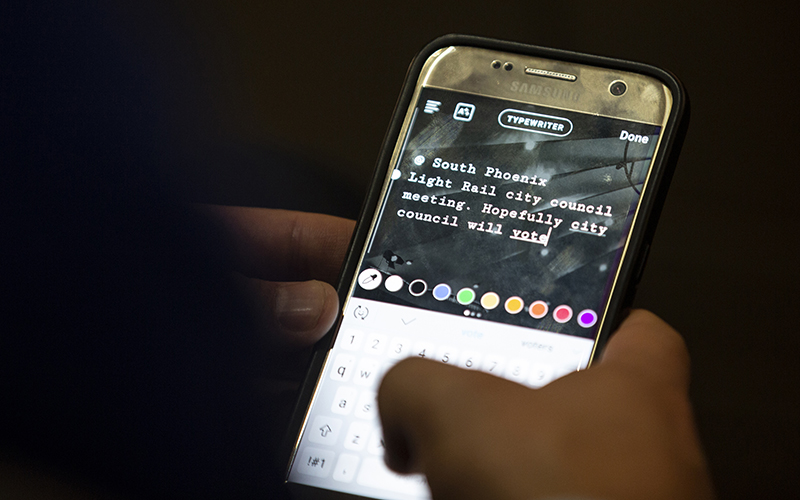 A member of the audience posts to social media during the City Council debate over the future of the light-rail expansion in south Phoenix. (Photo by Anya Magnuson/Cronkite News) 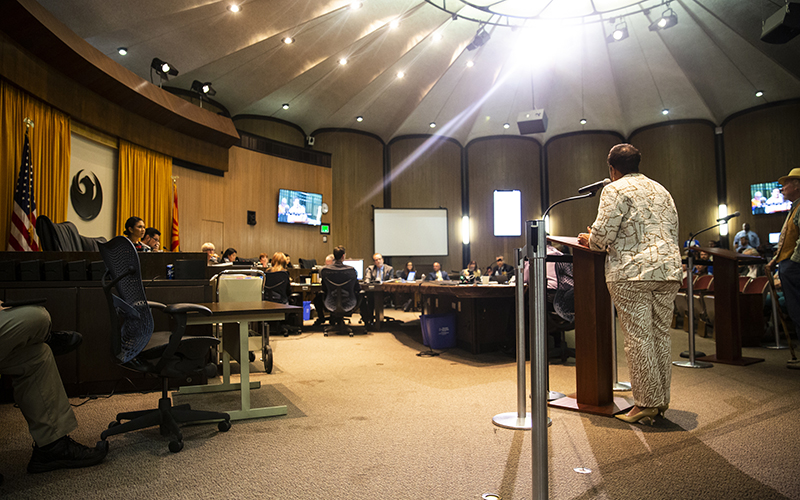 Deb Colbert is the first speaker before Wednesday’s City Council vote on the future of light rail in south Phoenix. (Photo by Anya Magnuson/Cronkite News) 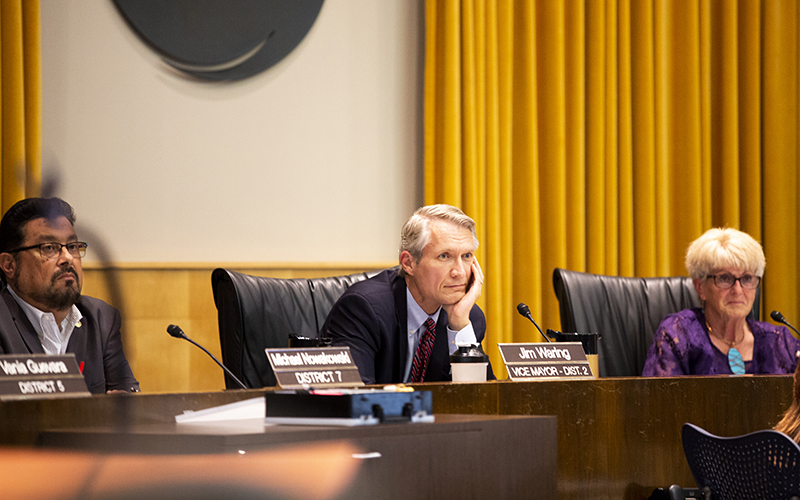 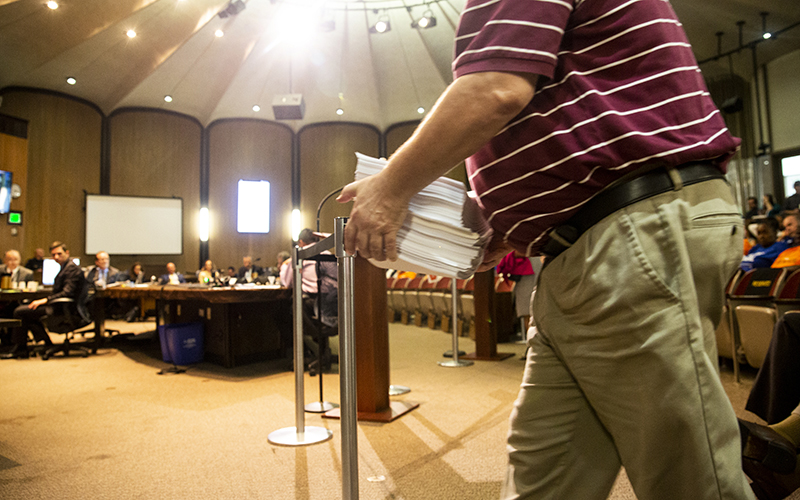 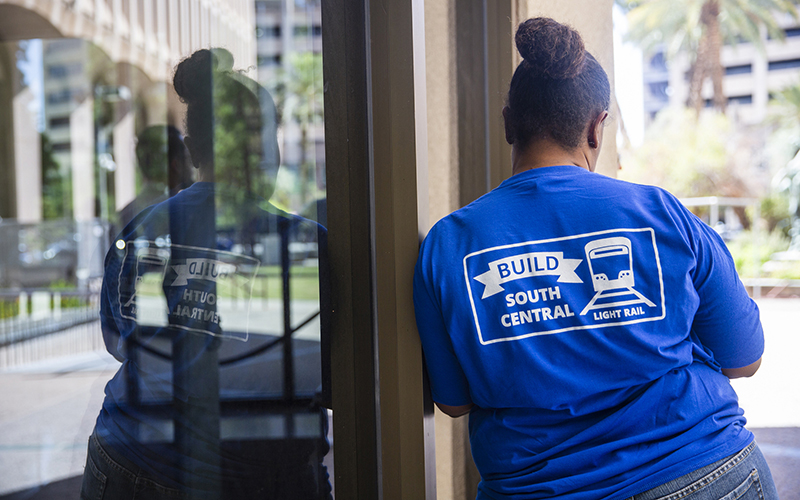 A light-rail supporter waits outside the City Council chambers before Wednesday’s meeting on the extension. (Photo by Anya Magnuson/Cronkite News)

Before Wednesday’s council vote, dozens of local residents, community activists and business owners had the opportunity to express their position on the issue.

Michael Kelly, who said he has lived in south Phoenix his whole life, supports the project.

“The City Council will support the will of the people and will vote for the expansion of the light rail system,” Kelly said.

Larry Cohen and George Vasquez, who own businesses in the area, see it differently. They fear the decrease of lanes from four to two on Central Avenue and the four-year construction time frame will have nothing but negative effects on local businesses.

“The light rail is bad for local business and will only bring more crime to our area,” said Cohen, who owns a jewelry store.

Vasquez, owner of a Poncho’s Mexican Food and Cantina, disagreed with the council’s decision and said his business will never be the same.

Plans to expand light rail recently have become more contentious, as citizen groups have launched rival campaigns for and against.

For some City Council members, the extension is a good way to add transportation resources to the area.

In 2015, Arizona residents voted for Proposition 104, which included funding for transit throughout metro Phoenix. That included the extension of the light rail into Phoenix between downtown and Baseline Road.

Hours before the vote, Sam Stone, chief of staff for Councilman Sal DiCiccio, a staunch opponent of the extension, said they didn’t expect to see any major changes happening at Wednesday’s meeting.

“Absolutely nothing. This is a dog and pony show. City Council was very clear right from the start they were going with the two-lane configuration,” Stone said.

The 5.5-mile light rail extension would assist 28 percent of people living and working in south Phoenix who depend on public transportation. Valley Metro plans to begin construction in 2019 and end in 2023.