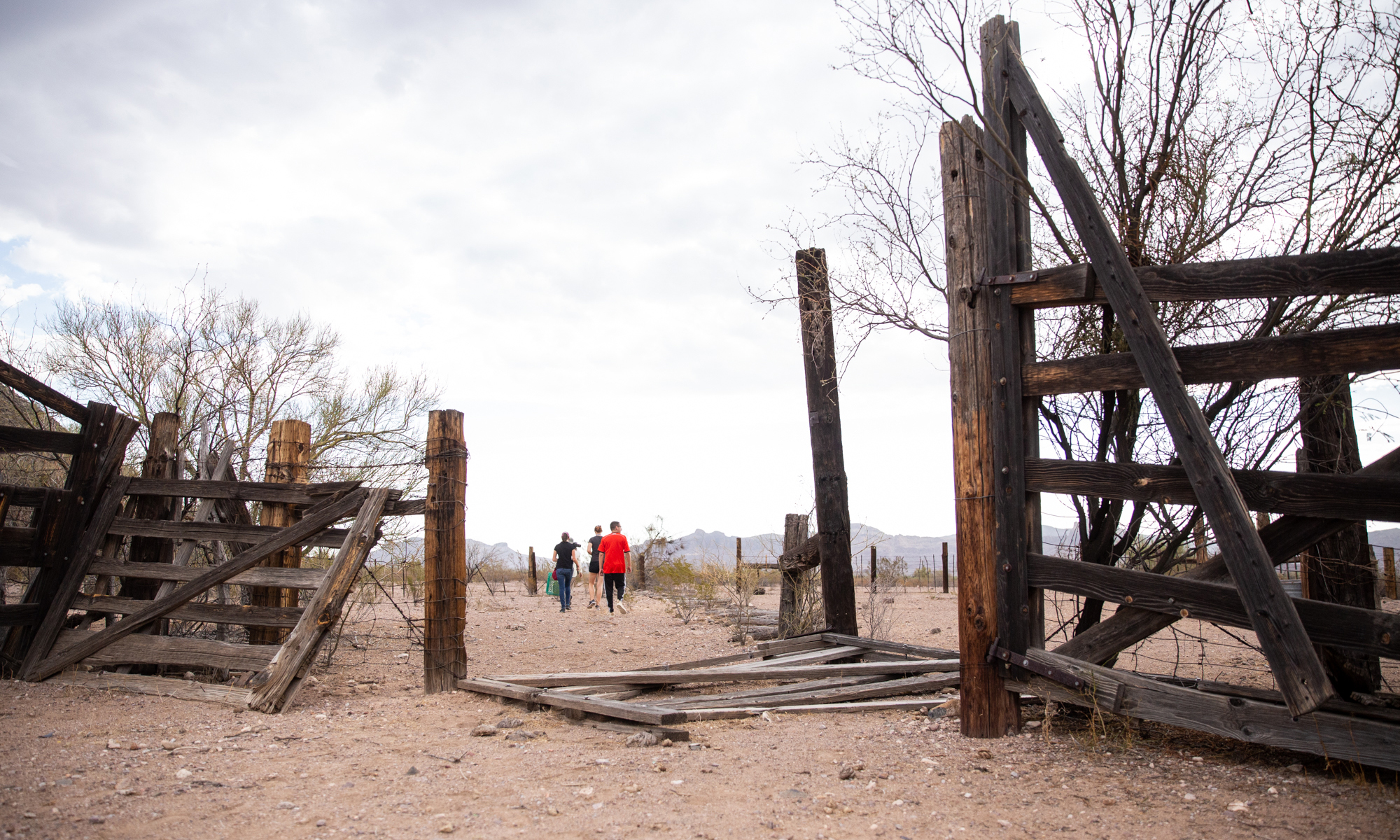 Volunteers for No More Deaths walk through an abandoned corral, one of many sites where the organization leaves food and water for migrants crossing the desert in southern Arizona. (Photo by Ellen O’Brien/Cronkite News)

AJO – The projected high for this July day is 105, and hints of the coming heat already glimmer at 6:45 a.m. The old Ram pickup shudders along uneven roads often traveled by Border Patrol agents in southern Arizona. Saguaros dot a desolate landscape.

Paige Corich-Kleim, a volunteer with No More Deaths, drives a truck packed with dozens of 1-gallon jugs of water and pallets of canned refried beans towards the U.S.-Mexico border.

Volunteers have been making the journey, up to five days a week, for more than a decade to drop off water and food supplies in a controversial mission to save the lives of migrants making the trek from Mexico into the U.S.

Corich-Kleim said water-drop spots are becoming more remote and that although the number of apprehensions at the border has dropped in the past year, the death rate remains disturbingly high. A strained relationship between the group and the Border Patrol, which arrested several No More Deaths members in January, has ratcheted tensions higher. 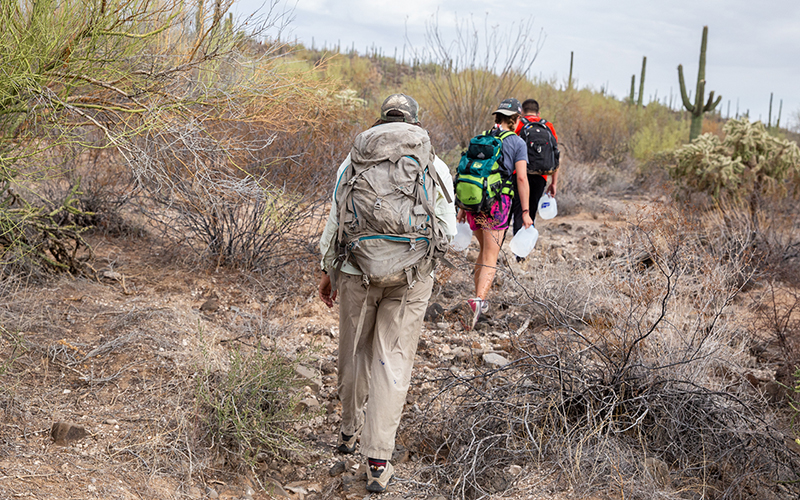 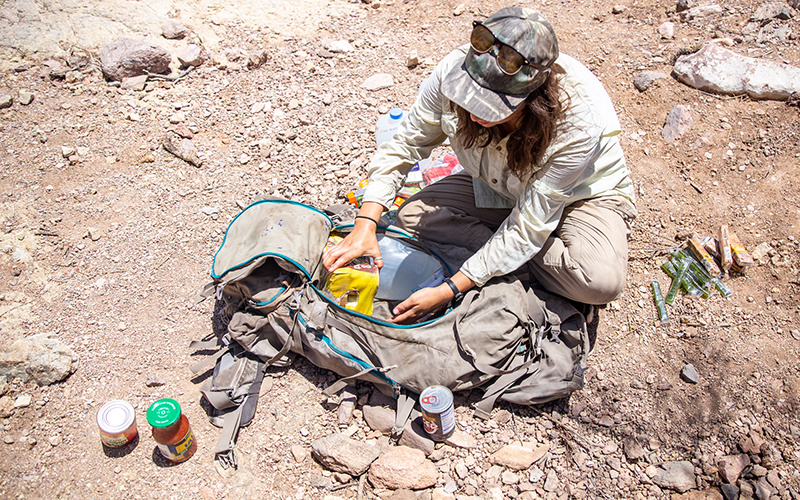 Corich-Kleim says that in the years she has volunteered with No More Deaths, she has seen usage at the drop sites decrease from as many as 80 gallons of water a day to fewer than 12 gallons a week. (Photo by Ellen O'Brien/Cronkite News)

David Melendez, president of the No More Deaths chapter at Northern Arizona University, shrugs off critics who say the group’s work is illegal.

“I think that humanitarian aid is never a crime,” Melendez said.

Border Patrol said their main goal is to secure the border against illegal immigrants but also said the agency and the nonprofit share the same motive: to preserve lives.

“We all care about human lives,” said Stephanie Dixon, a Border Patrol agent and spokeswoman. “We are all a humanitarian group at the end.”

Even as both groups work towards a similar goal, their data, their approaches and even their accounts of what is occurring at the border diverge.

The three volunteers in the pickup follow a strategy that has become routine as they head for drop sites. Other volunteers have already done much of the prep work to find the best places.

They have hiked the terrain, looking for such man-made structures as abandoned rescue beacons, ranch houses or cattle pens – places migrants might seek if something goes wrong.

The group looks for “obvious ways that people would move through different mountain systems,” Corich-Kleim said. “It’s really all a lot of experimentation and trial and error.” 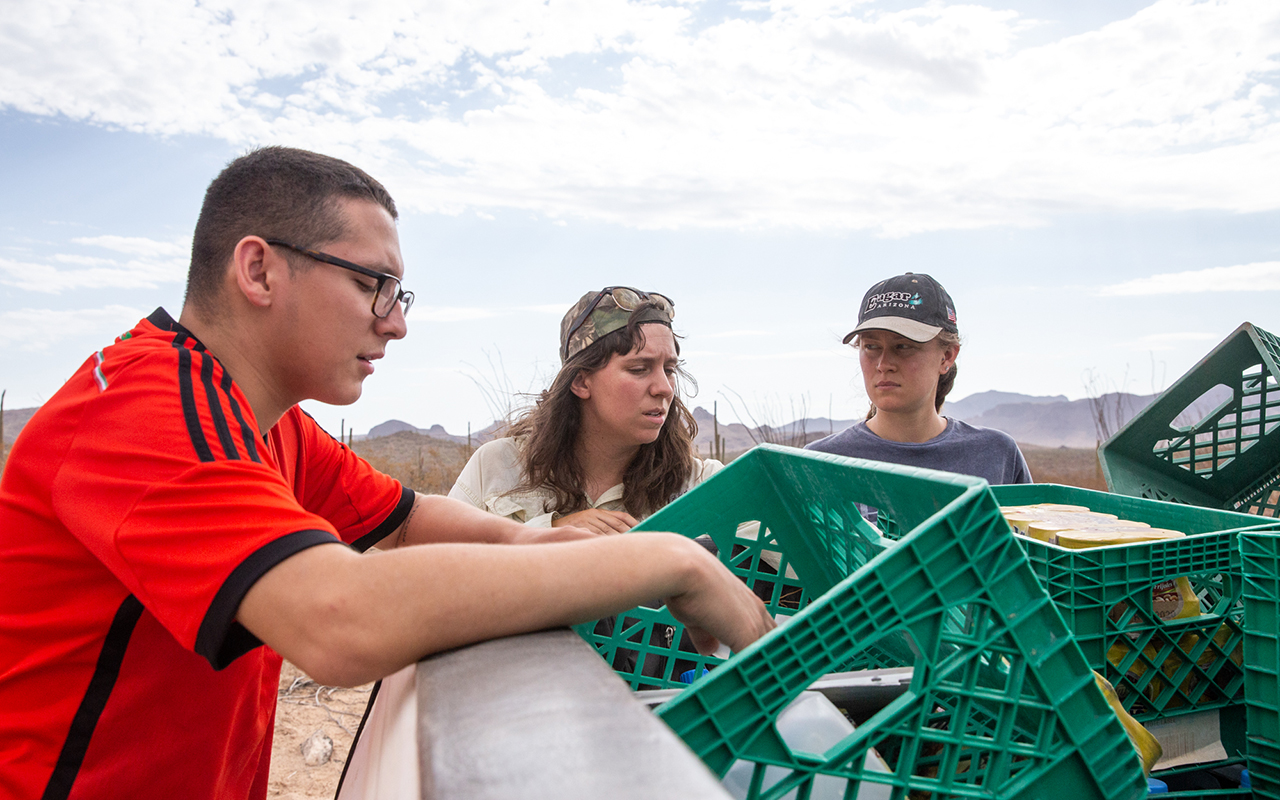 The group also analyzes the Arizona OpenGIS Initiative for Deceased Migrants, which maps deaths at the border. The Pima County Medical Examiner’s Office puts the maps together along with Humane Borders, another organization maintaining water-drop spots in the Sonoran Desert.

The logic leads to the five or six stops planned for the day: Where there are deaths, there must be migrants.

Corich-Kleim stops the pickup at an abandoned beekeeping shed, the first drop. Rotting hives sit inside the crumbling wooden building. Nearby signs put up by the Bureau of Land Management read “Don’t disrespect the dead.”

Volunteers lift the crates meant to keep animals out to see how many gallons of water have been used. Two of the three crates are untouched, but a number of gallons are gone from the third. Volunteers retrieve the scattered empty jugs and replace them with fresh ones.

They also check white buckets filled with canned beans and other packaged foods. Some of them have been eaten, so the volunteers replace them with a new batch of snacks. Today’s snack is Andy Capp’s Hot Fries.

Vanessa Savel, who has volunteered with No More Deaths in Flagstaff for two years, sits on one of the crates and pulls out a black marker.

The volunteers draw pictures and write messages on the gallons, such as “Buena Suerte,” “Que Dios les Bendiga” and “No te Preocupes”: “Good luck,” “God Bless You” and “Don’t worry.” 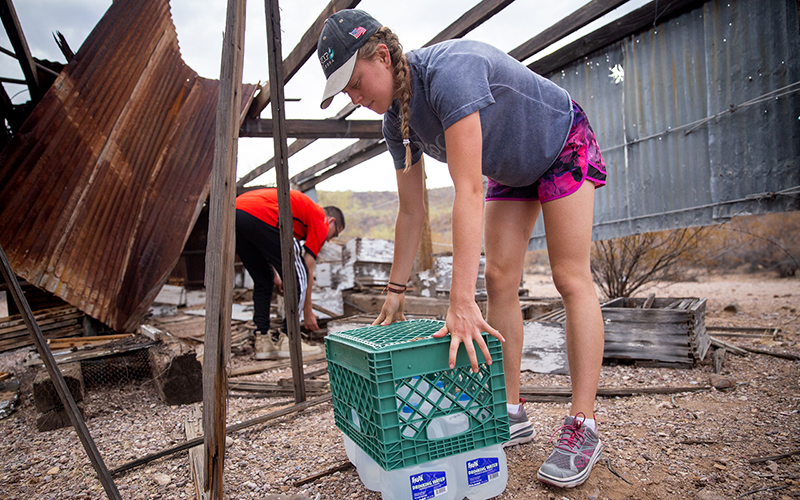 Vanessa Savel places a plastic crate over jugs of water to protect them from animals at a remote site. (Photo by Ellen O'Brien/Cronkite News) 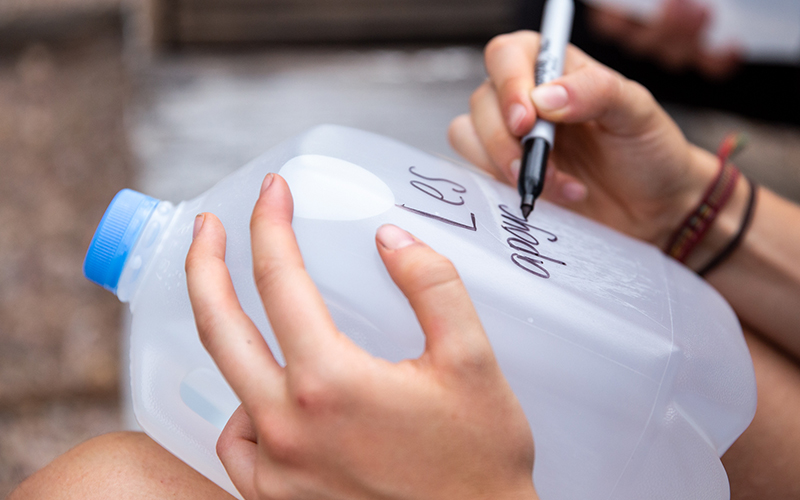 “A lot of it just to make it so people aren’t afraid to take the water,” Corich-Kleim said. “There’s sometimes rumors that the water is a trap from Border Patrol or that it’s poisoned.”

Those rumors are false. The Border Patrol does not go to those extremes, but the agency and No More Deaths do have a fraught history. The Border Patrol came under fire in early 2018 when footage of agents destroying water and supplies left for migrants from 2010 to 2017 was released.

The footage was released as Part 2 of a study conducted by La Coalición de Derechos Humanos, an immigrant-rights organization working with No More Deaths.

The Arizona Republic reported nine No More Deaths volunteers, including Arizona State University professor Scott Warren, were arrested at a safehouse known as the Cabin near Ajo hours after the study was released. Volunteers claimed the timing of the arrests, on accusations of smuggling and harboring people who entered the country illegally, was suspicious.

According to the coalition study, supplies were vandalized 415 times over 46 months from 2012 to 2015. Volunteers recorded the incidents in an area near Tucson where No More Deaths operates.

“We don’t condone those actions at all,” Dixon of the Border Patrol said of the agents’ behavior. “If any citizen sees that, we highly encourage them to call so we can hold agents accountable for those actions.” 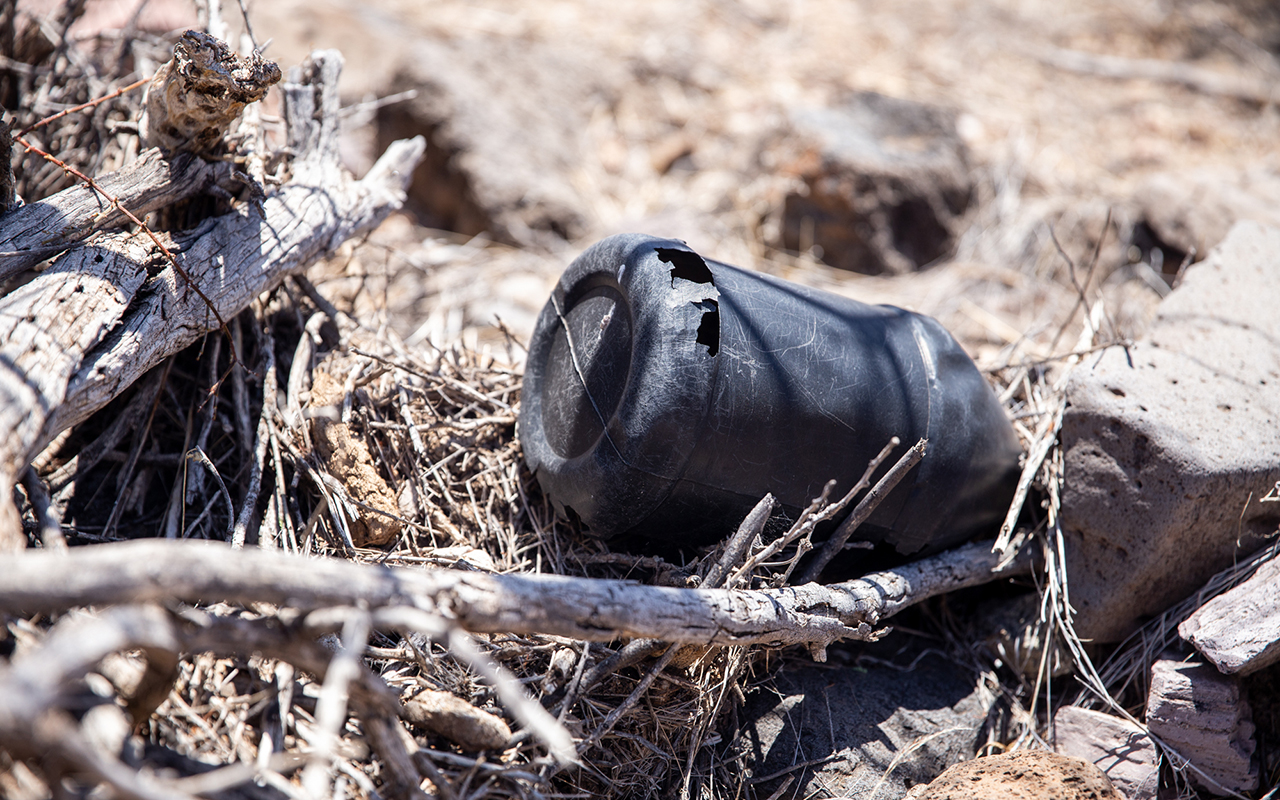 A black water jug, likely left in the desert by a migrant. According to volunteers for No More Deaths, migrants carry the black jugs because light reflects off white jugs and could give away their presence. (Photo by Ellen O’Brien/Cronkite News)

Dixon also said the Border Patrol will work with groups to save lives if given the chance.

“We are open to communicating and talking to any nongovernmental organization that wants to work with us,” she said.

No More Deaths volunteers argue that the Border Patrol has created the problem they are working to solve.

“Their policies have created this crisis,” Corich-Kleim said. “They’re trying to clean up their own mess.”

Dueling over data on deaths

The disconnect between the two groups also shows in inconsistent and contradictory approaches to collecting data on the number of migrant deaths.

“The number of apprehensions has slowly been going down over the years, but the number of remains that are found have stayed pretty constant,” Corich-Kleim said.

The Missing Migrants Project, started in 2013 as part of the International Organization for Migration, relies on medical examiner records, news media reports, eyewitness accounts and non-governmental organizations, or NGOs, to compile their data on migrant deaths, according to their website.

They have found that reported migrant deaths have increased from 306 to 415 from 2014 to 2017 along the Mexican border.

Dixon cites the Border Patrol’s data, which show the opposite.

However, Border Patrol only counts bodies agents discover in the field.

“We only report what we find,” said Daniel Hernandez, a Border Patrol spokesman. “If Pima County Sheriff’s or an NGO finds human remains, we do not track it ourselves.”

Because of that approach, the Arizona Republic reports, the Border Patrol frequently undercounts the number of migrant deaths and disappearances.

Both No More Death and the Border Patrol agree on one point: The route to the U.S. is deadly. According to the Missing Migrants Project, most causes of death at the border are unknown. Some people will never be found, but traces of the paths they traveled can still be recovered.

By 2 p.m., the No More Deaths volunteers arrive at the last drop site of the day. The supplies here are most heavily used, with at least seven gallons empty and sitting about 10 feet away from the rest of the crates.

Three wooden crosses, one with a blue and white rosary hanging from the center post, mark the site where migrant remains were found. There are no names. 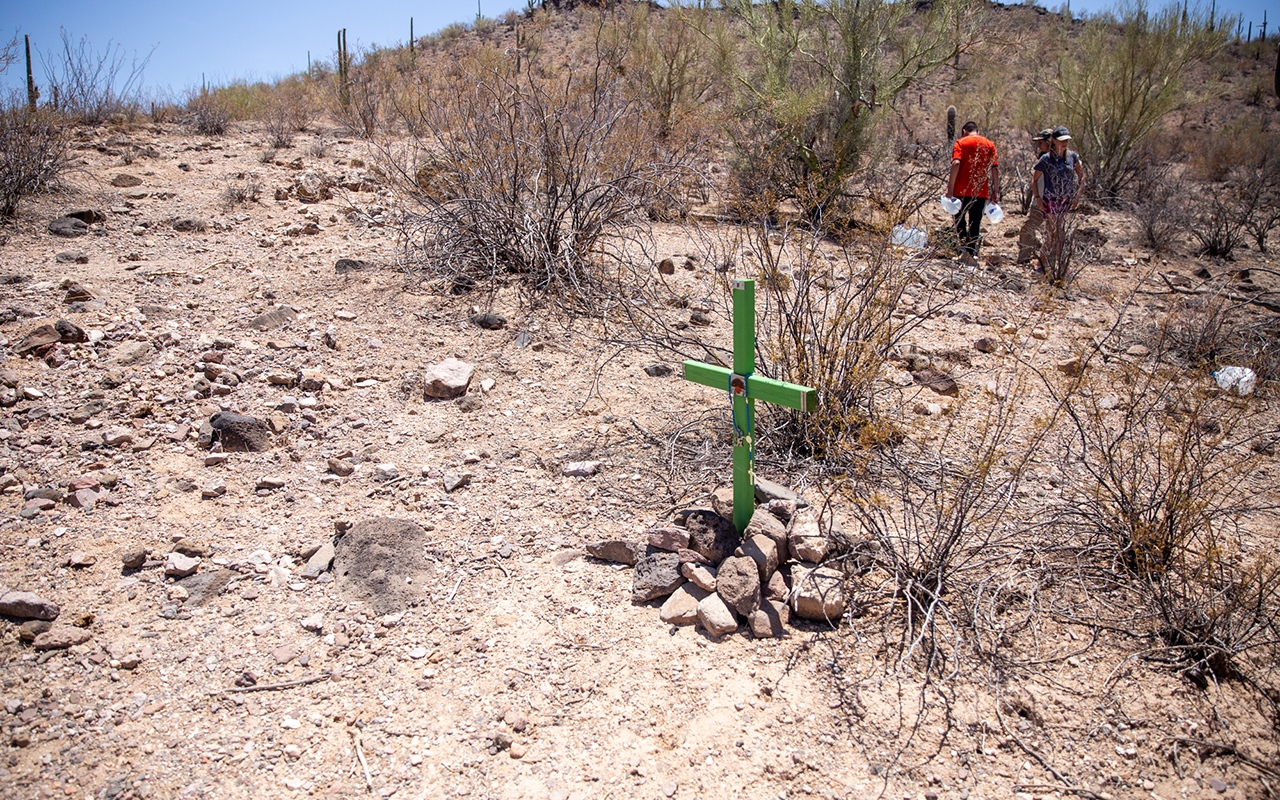 Volunteers for No More Deaths leave water near a cross marking where a migrant’s body was found. (Photo by Rebecca Spiess/Cronkite News)

Corich-Kleim said the scope of migrant deaths at the border is still unknown. Experts can’t determine cause of death or a home country for a large number of the bodies found at the border. Even the Pima County Medical Examiner’s Office and Humane Borders’ maps are incomplete.

“What’s important to know is these aren’t death maps. They’re recovered remains maps,” Corich-Kleim said. “So only people who die and are found are on the maps.”

“There’s a lot of people that just completely disappear and their remains are never found just because of the nature of the Sonoran Desert.”

Over the course of the supply drops, volunteers have seen traces of the migrants they are trying to help. Strips of blue fabric lined with shag carpet-like fibers and black spray-painted water bottles are abandoned near the supply drops.

Migrants wear these “carpet slippers” over their shoes to obscure their footprints and spray paint the bottles to mitigate the glare of clear plastic and hopefully avoid detection by Border Patrol lights and helicopters.

At 3 p.m., the pickup rolls back into Ajo. Volunteers argue over who will pick up popsicles. Corich-Kleim says she just wants to shower.

She gets out of the truck and walks back to her car, her empty backpack slung over one shoulder. Tomorrow, at 6 a.m., she will be back in the pickup, restocking water and supplies for a fresh journey.