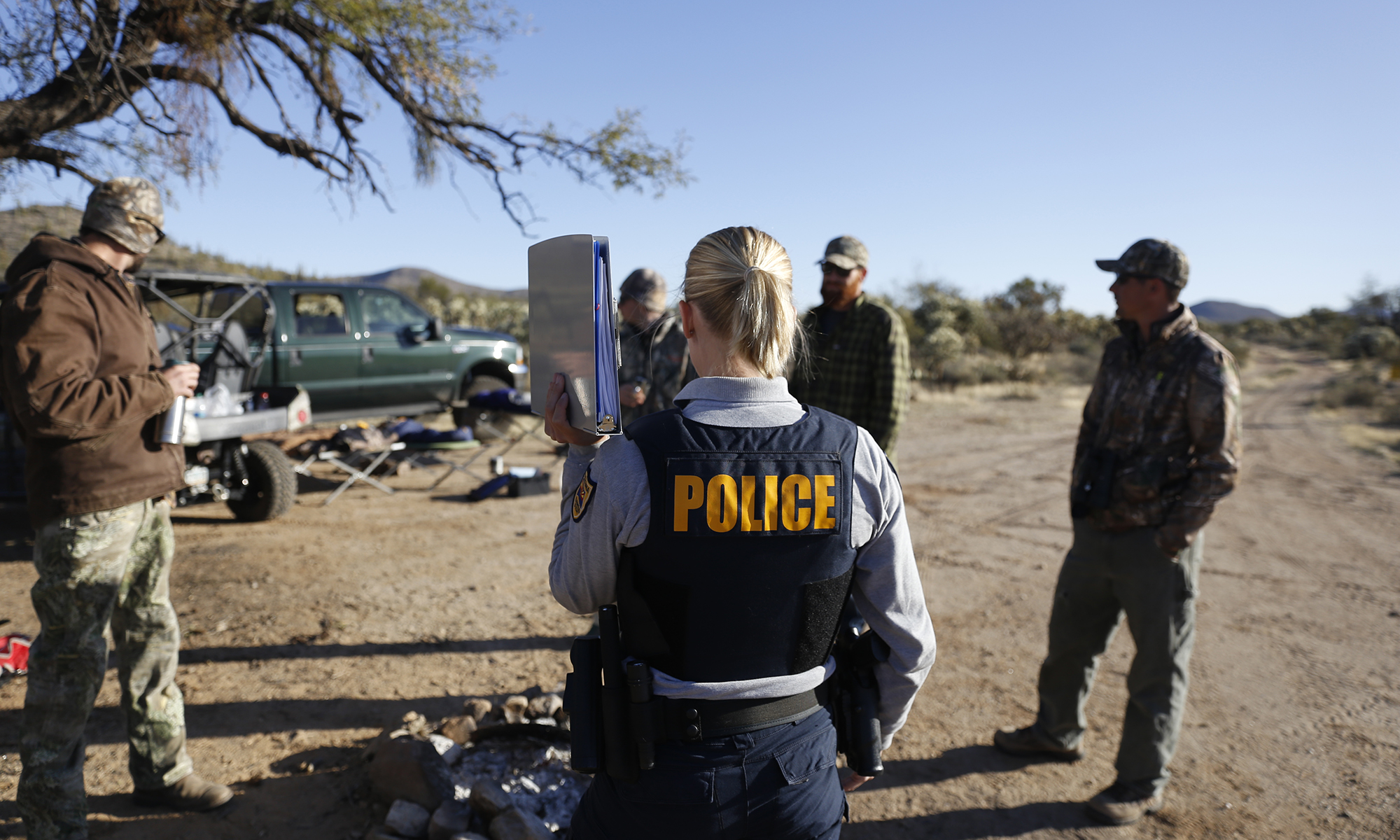 FLORENCE – Officer Laura Orscheln sets up her binoculars and tripod and stands on a ridge overlooking the quiet desert near Florence. Scanning the desert for any movement, the Arizona Game & Fish Department wildlife manager spots something dark moving about a mile away.

It’s just trash, so she sweeps her binoculars elsewhere. She’s “glassing” – a practice hunters use to identify game from a distance.

But Orscheln isn’t just looking for animals, she’s also looking for hunters. She keeps her eyes peeled and listens for gunshots.

On this February day, a javelina hunt licensed and organized by Game & Fish is under way, one of the many big game hunts throughout the year. As a wildlife manager, it’s part of Orscheln’s job to keep track of what’s happening in this expanse of desert.

Nearly 100 wildlife managers travel across the state to monitor hunts, check tags and licenses and study animal populations. They focus much of their time on protecting wildlife and trying to stop poaching – a duty they say is critical to maintain healthy populations and ensure the survival of species across Arizona.

Poaching is a widespread problem around the world. According to the Humane Society of the United States, legal hunters kill tens of millions of animals every year. But for each animal killed legally, another is killed illegally, it says.

Experts estimate that less than 5 percent of poachers in the U.S. are caught, the Humane Society Wildlife Land Trust reports. 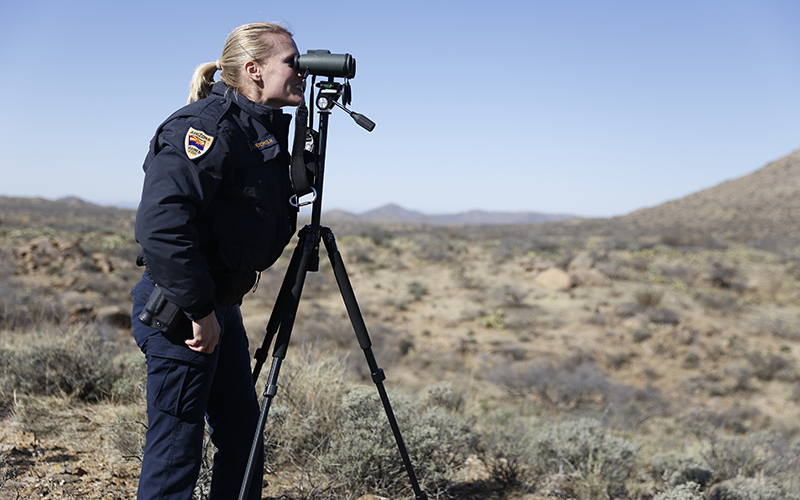 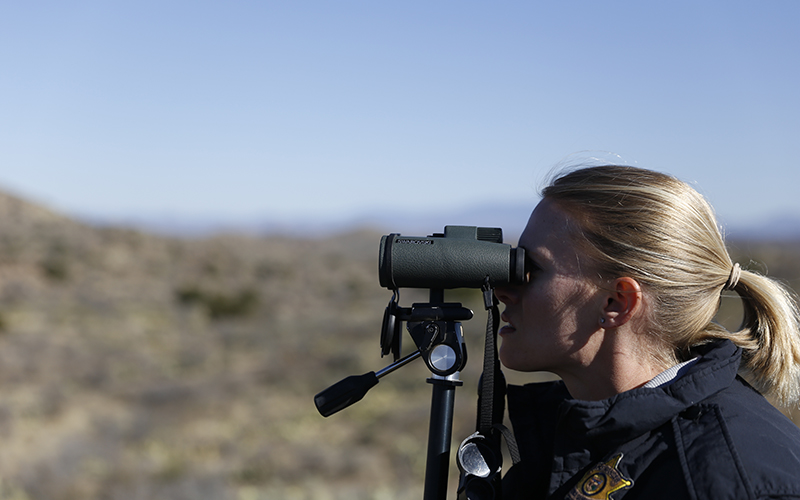 In 2017, Arizona Game & Fish issued 76 citations for the illegal taking of big game, fishing violations and the unlawful killing of raptors. The department collected $74,500 in fines.

Because of negative effects poaching can have on wildlife management – and the multimillion-dollar economic impact hunting has on the state – the department has placed an emphasis on catching poachers in Arizona. It offers thousands of dollars in rewards for information leading to arrests, manages the Operation Game Thief website and toll-free hotline (800-352-0700) and even uses robotic mule deer decoys to try to catch thieves.

Tyler VanVleet, the department’s law-enforcement program manager, said the hotline is essential to the mission.

“We can’t be out there 24/7, so we rely quite a bit on tips from the public. We get a lot of information from neighbors and people who are out in the field and see something,” he said. “We rely on people to police themselves and do what’s right by the law.”

“There’s a difference between a hunter and a sportsman,” Officer Orscheln said. “A sportsman is somebody who goes out and abides by all the laws to the best of their ability. They’re out there with the intention of doing it the right way. It’s not just runnin’ and gunnin’, trying to kill something.” 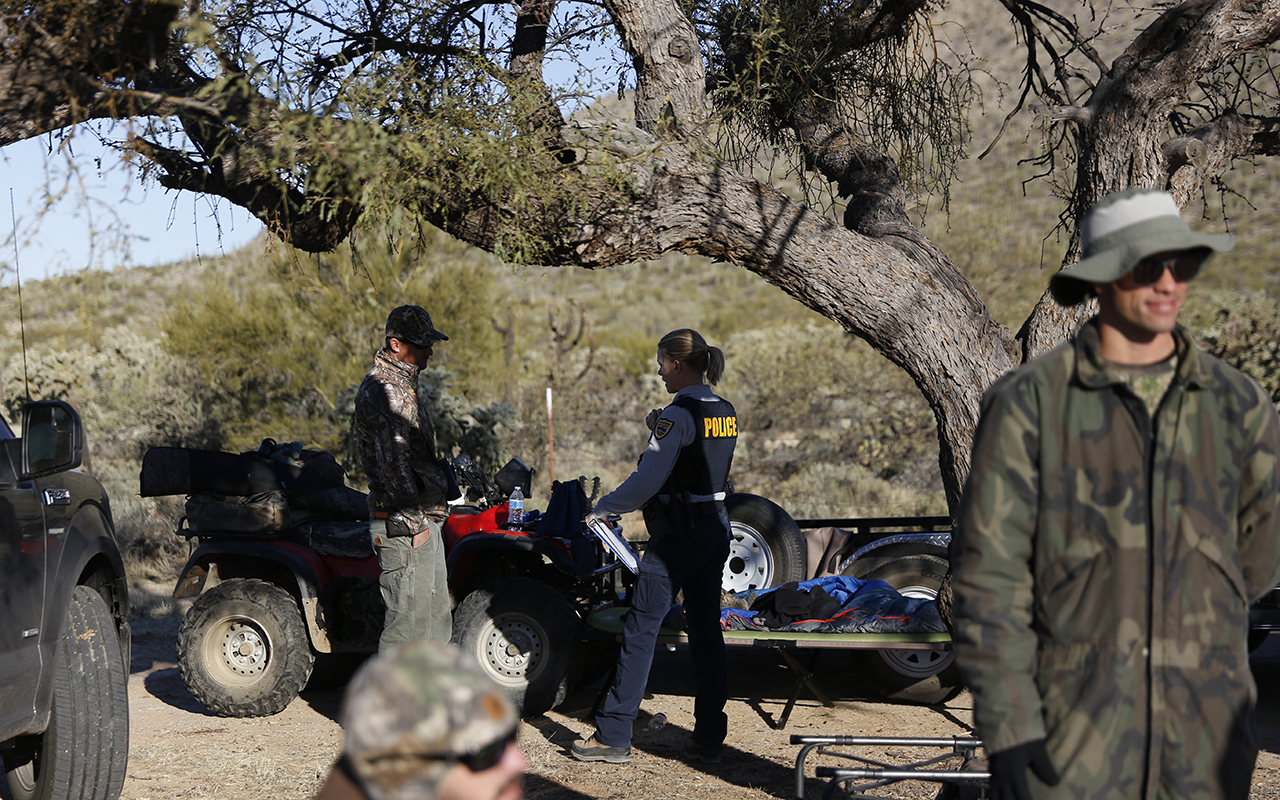 During Orscheln’s patrol near Florence, she stopped at a campsite after noticing a javelina hanging by its hind legs from a tree. The hunters had gutted the javelina – which resembles a wild boar but is classified as a collared peccary – and hung it to preserve the meat.

When Orscheln arrived, the hunters showed their licenses. The hunters had the proper paperwork, but they had failed to tag their animal. Tags are required for permission to hunt certain animals.

In Arizona, there are small-game and big-game hunts. The hunts are organized according to weapon, species and geographic location. For small game, such as doves, pigeons and squirrels, hunters need a general hunting license, and they must hunt the animal within its specified season. For example, squirrels are in season from October to December.

To hunt big game, such as deer, javelina and bears, hunters must apply for a permit through Arizona Game & Fish. The department issues big-game permits through a draw system, which only allows a certain number of permits and tags each year, depending on the species’ population, Orscheln said.

For example, permitted hunters can take two javelinas a year, but they can only kill one bighorn sheep during a lifetime. (And obtaining a permit isn’t easy – the state auctions or raffles three tags each year, bringing in about $400,000.)

Even if a hunter has a license, failing to tag the animal right after the kill can result in a citation. Orscheln said it’s critical for hunters to tag correctly to prevent “buddy hunting.”

“Buddy hunting” is essentially using someone else’s tag for an animal you shot.

On the February hunt, the hunter who killed the javelina was in his late teens and said it was his first big-game kill. Orscheln let him off with a warning, but she advised him to that he needs to tag his animal as soon as he gets it.

Orscheln said one form of poaching is wasting game meat. “People can’t just hunt and kill things. You have to take it home for consumption,” Orscheln said. “Or donate it.” 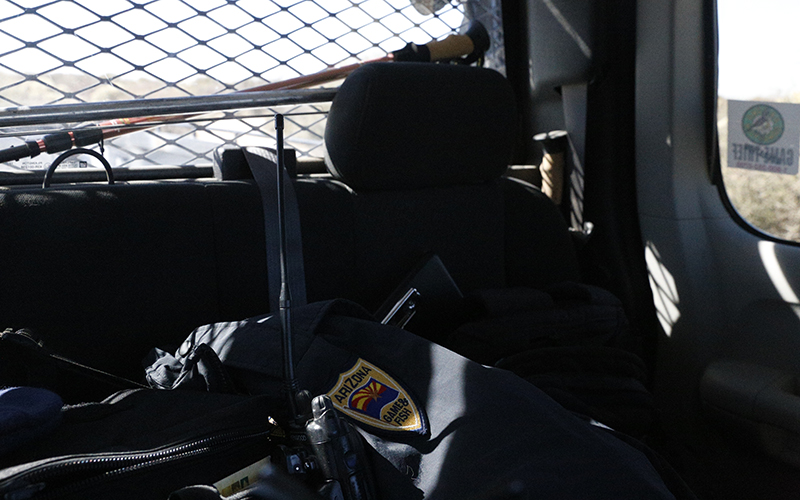 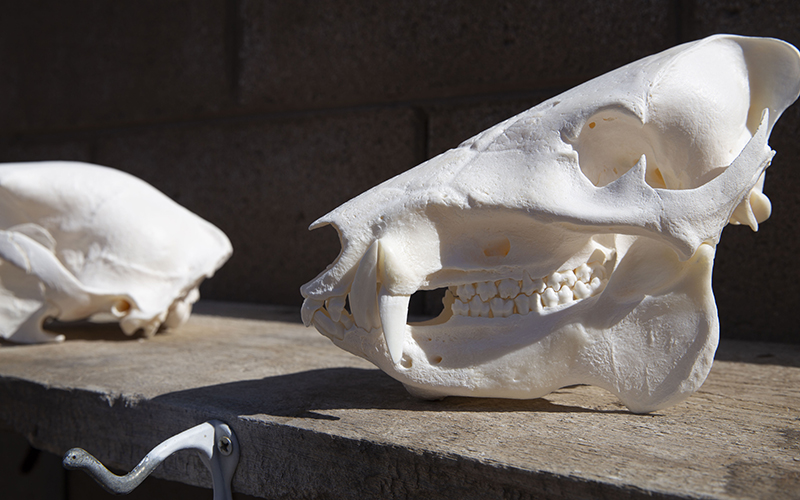 Experts said the hotline is popular with hunters, and the information gathered is crucial for finding poachers. (Photo by Meagan Boudreau/Cronkite News)

The department established the hotline in 1979 to bring civil action against poachers, or those unlawfully taking, wounding or killing wildlife, according to the department’s website.

It’s one of the main ways the wildlife managers find poachers. Orscheln said they need callers to provide as much information as possible.

“We need the vehicle that they get in and leave in, and a license plate, and what their equipment looks like,” Orscheln said. “If there’s something weird about the way they walk, we want to know that because it all just helps us narrow in on the person who committed the violation. We’re just like any other officer. We can’t write a ticket based off of assumption and heresy.”

Experts said the hotline is popular because most hunters understand the importance of keeping wildlife populations healthy.

“It is absolutely important to go about everything the right way, as far as getting your tag the proper way, putting in through the lottery system,” said Daniel Gradillas, 39, of El Mirage. “Once they give you a tag, they’re able to record data and know how many animals were taken out of a certain area.”

“If somebody illegally takes an animal,” Orscheln said, “they have essentially robbed someone else of the opportunity to legally take that animal, or they’ve robbed the population of a breeding animal that would contribute to sustaining the population.”

Hunting in Arizona brings injects about $592 million into the state’s economy, supports more than 5,700 jobs and generates $42.4 million annually in taxes for Arizona, according to a 2011 study done by U.S. Fish and Wildlife Service.

The Fish & Game website boasts that Arizona “offers some of the best, and most unique, hunting opportunities in the nation.”

Gradillas said hunting has been a part of his life since he was a child.

“I first started deer hunting, and to this day, deer hunting still excites me. I love the challenge,” he said. “Any time I go out, I still feel like a little kid. Anytime I look through binoculars and I see a deer, it’s just that excitement that was instilled in me as a child and it never gets old.” 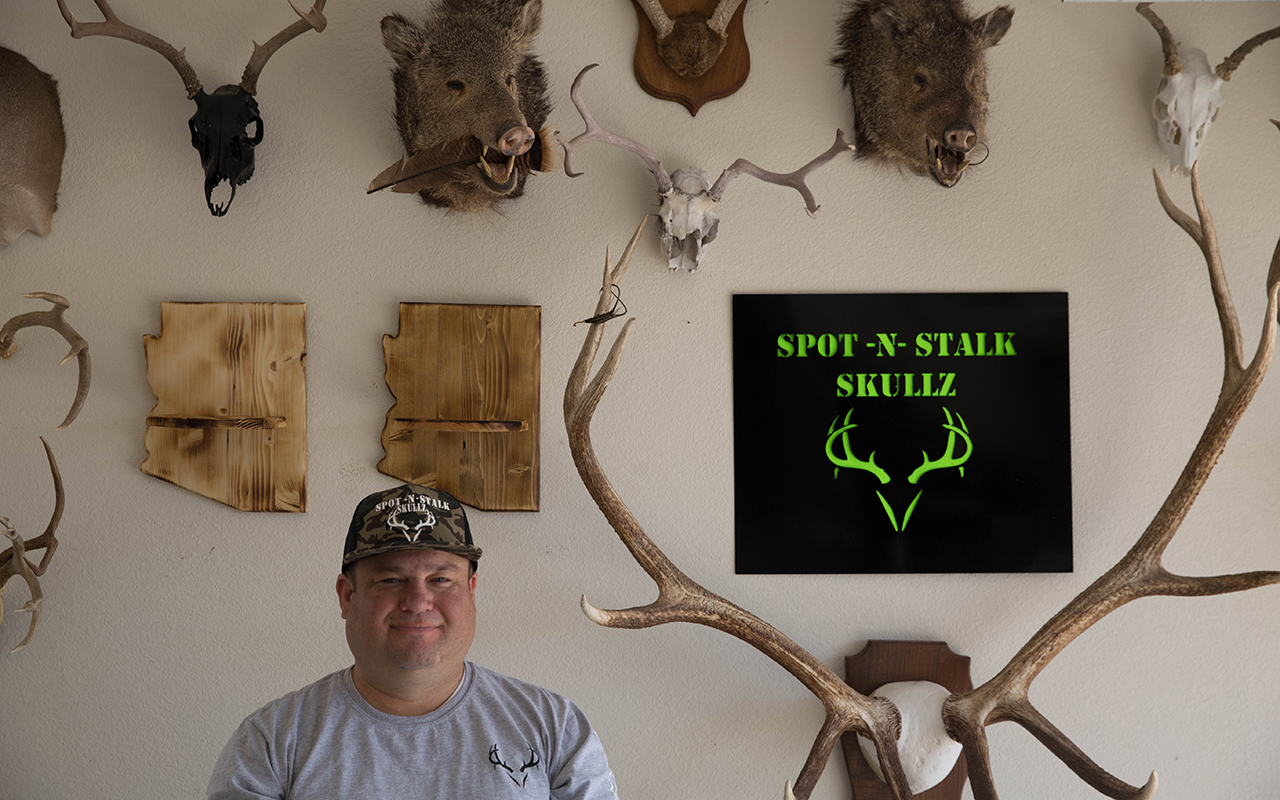 Daniel Gradillas of El Mirage has been hunting since he was a child. “Poaching itself, it’s stealing,” Gradillas said. “It’s one of the most selfish acts that someone can commit.” (Photo by Meagan Boudreau/Cronkite News)

Orscheln said most hunters are used to visits from wildlife managers.

During a hunt, Orscheln said she wants to “talk to as many hunters as I possibly can and fly the flag so to speak. Let them know we’re out there.”

“I try to go to an area where I know I’m going to find camps.”

In 2017, wildlife violations in Arizona resulted in $74,500 in civil fines. That money goes directly to the Wildlife Theft Prevention Fund, according to the Fish & Game Department. The department uses the money to reward people who report information that leads to an arrest, fund and promote the hotline, and support investigations into possible poaching.

In January, the department offered up to $1,000 for information leading to an arrest regarding the illegal killing of a mule deer near Tucson.

“Poaching itself, it’s stealing,” Gradillas said. “It’s one of the most selfish acts that someone can commit.”

“People can go a lifetime going the proper channels trying to get a tag, say, for a bighorn sheep. Then there’s someone who will go out in the middle of the night and blind a bighorn sheep with their headlights and take it, shoot and then not even take the animal, just shoot it for the thrill of the kill. But it’s very unfortunate and sad.”