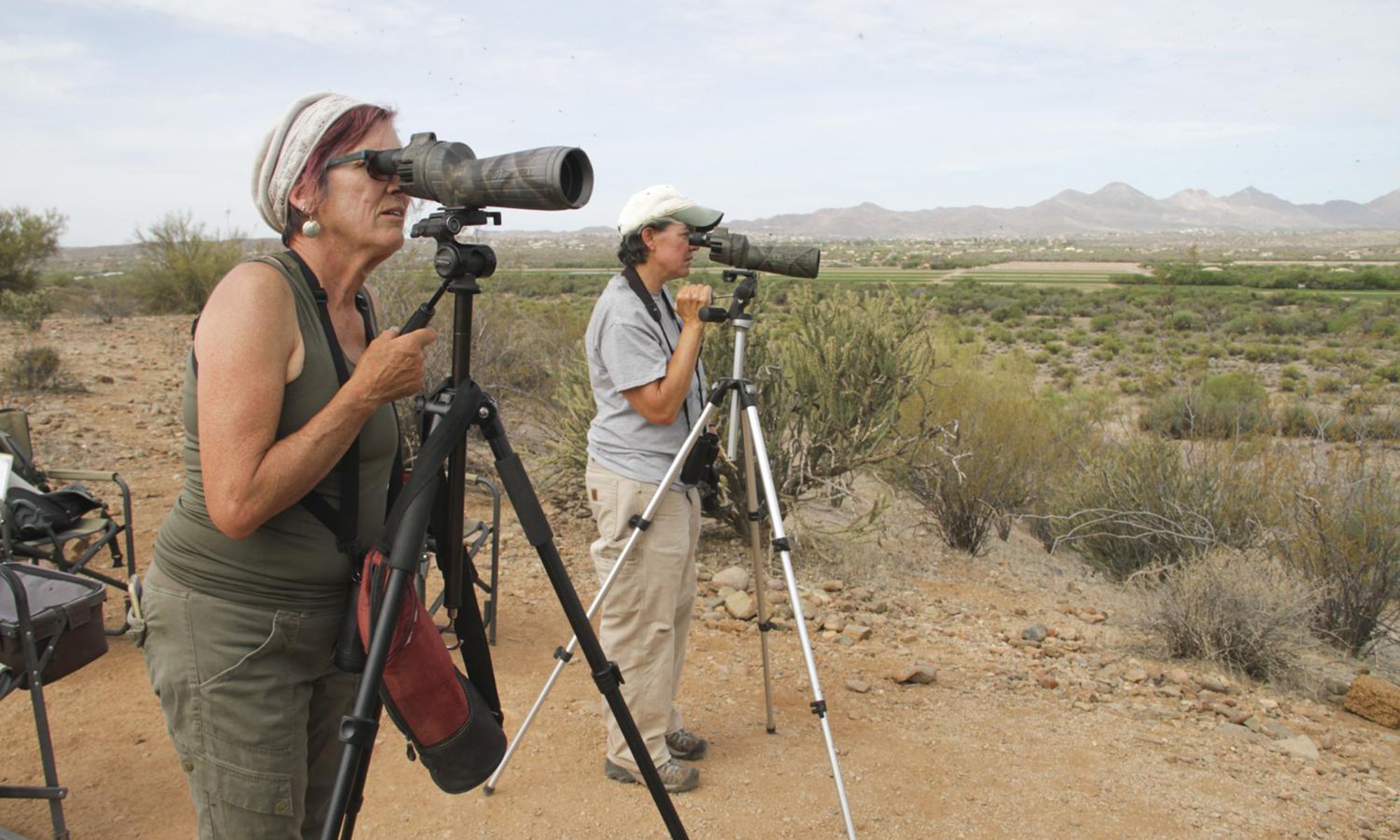 Leah Vader (left) and Jen Ottinger scour the landscape for a pair of bald eagles. Ottinger calls herself an “ornithological hobo.” She’s a biologist who travels from job to job. Ottinger invited Vader, who is not a biologist, to join her in Arizona a decade ago. (Photo by Mariana Dale/KJZZ)

FORT McDOWELL – Leah Vader’s alarm starts ringing at 4 a.m. She’s out of the tent by 4:40 and making coffee. By sunup, she has set up her telescope at “the office,” a hill overlooking the Verde River.

Vader waits for an adult eagle to drop prey into the nest, a sure sign there’s a chick present. “We always say they don’t feed eggs,” she said.

Vader and about two dozen other people hired by the Arizona Game & Fish Department to watch bald eagles nest every year from February to June. 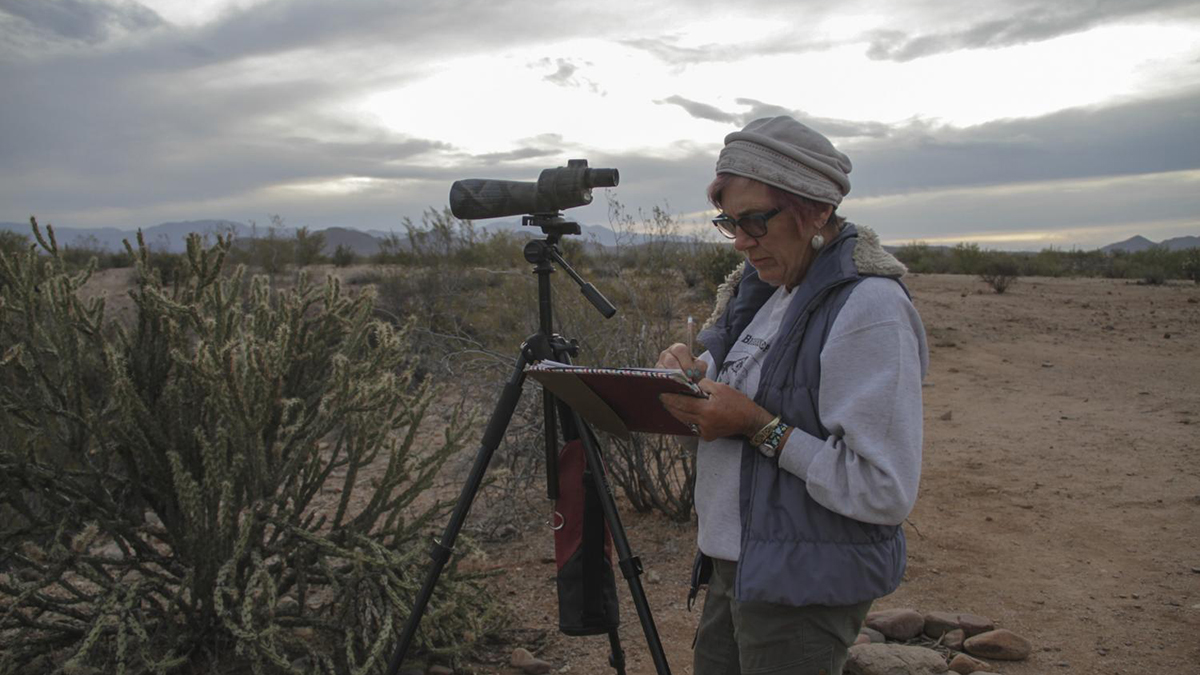 This is the mother of four’s 10th year traveling from Wyoming to Arizona for the season. Most nest watchers are field biologists chasing seasonal work. Vader is an exception.

From scarcity to soaring populations

When Arizona’s nest-watch program – thought to be the only one of its kind – started in 1978, eagle populations around the country had been decimated by the pesticide DDT and human encroachment.

“The nest watchers that we have out there, they really serve as our front lines,” said Kenneth “Tuk” Jacobsen, raptor management coordinator for Arizona Game & Fish. 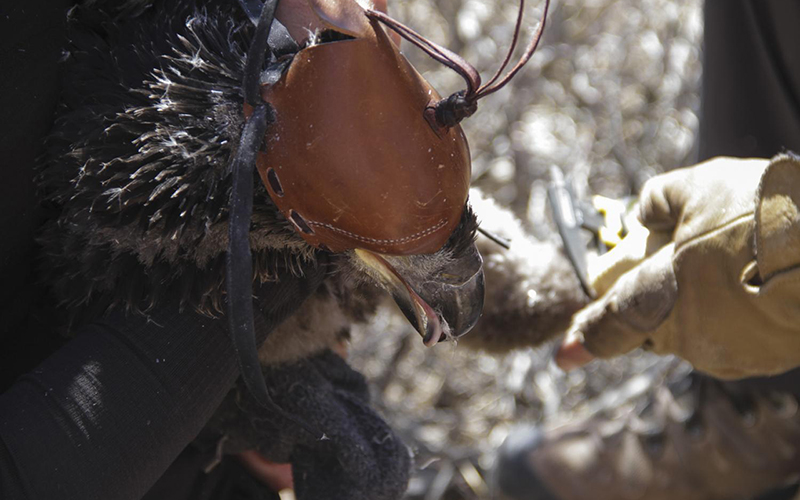 Arizona Game & Fish biologists use hoods to calm the chicks while biologists measure and band them. (Photo by Mariana Dale/KJZZ) 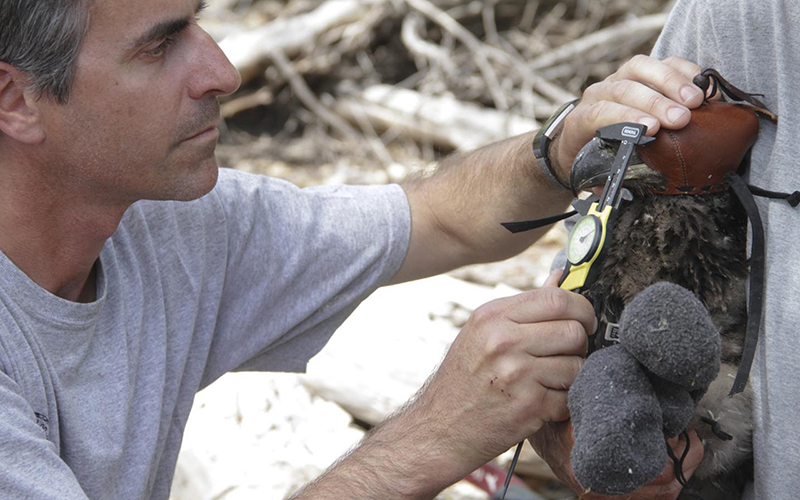 Arizona’s bald eagles are uniquely adapted to the harsh desert. Data show 87 percent of tracked eagles will nest within about 90 miles of where they were born, Jacobsen said.

“If the population in Arizona declines, it doesn’t have other populations that are going to help bolster it,” Jacobsen said.

Arizona’s program may be unique because the population here is so small compared with other states.

Arizona has about 67 active eagle nests this year; Minnesota, in contrast, has more than 2,300 breeding pairs.

Bald eagles were removed from the Endangered Species list in 2007, although some groups pushed for Arizona’s eagles to be protected longer.

“The bald eagles I think help as a ambassador for other species to get people interested in conservation and see that those efforts in conservation can be successful,” Jacobsen said.

Several of the nest sites are on the Fort McDowell Reservation, so protection is a collaboration between Game & Fish biologists and tribal officials.

“We’re not isolated with our birds,” Vader said, adding that it’s all about the relationship between humans and birds.

Throughout the nesting season, Vader and her eagle-watching partner, Jen Ottinger, will visit schoolchildren, Earth Day celebrations and senior centers to share what they’re learned about the Fort McDowell bald eagle community.

Bald eagles play a role in the history and culture of the Fort McDowell Yavapai Nation.

In some versions of the Yavapai creation story, a young boy disguises himself as prey to be carried into the eagle’s nest. Once there, he kills the eagles for murdering his mother.

The federal government tried to build a dam that would have flooded most of the tribe’s land in the 1970s, including known eagle nesting sites. The Yavapai fought the Orme Dam proposal and won.

Donald Beckman grew up on the Fort McDowell Yavapai Nation and said he was taught the ancestors pointed to the eagles for answers.

“They will come when you need help, they know,” Beckman said. Beckman participates in tribal songs, including those directed at the eagles.

“I’m happy that you’re here, it’s good that I see you, I can almost understand you and what you saying in your words,” is the English translation for one song.

‘They’re a mighty bird, but little things can harm them’

One April morning, a small group of biologists, nest watchers and members of the Fort McDowell Yavapai Nation community tromp through the mesquite; above them towers a cottonwood tree. Wedged in its branches are a collection of sticks fashioned into a nest the size of a loveseat: an eagles nest.

A Game & Fish biologist straps into a harness and begins to climb. Two chicks, roughly 5 weeks old, are briefly removed from the nest to measure and mark them with metal bands. 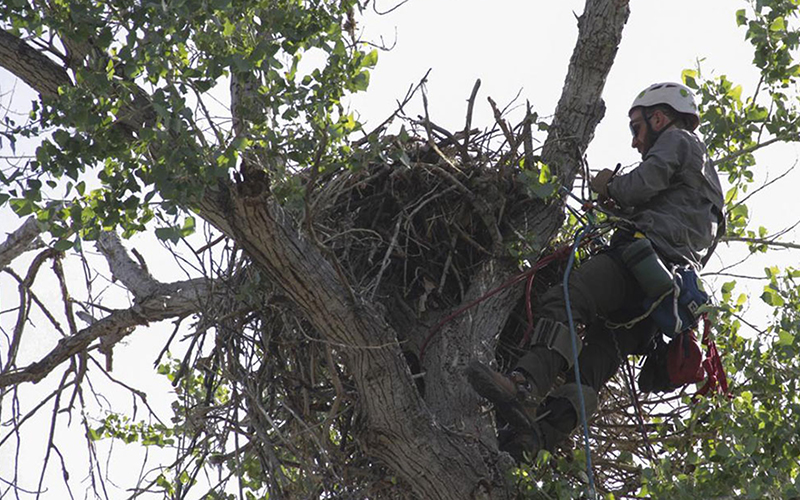 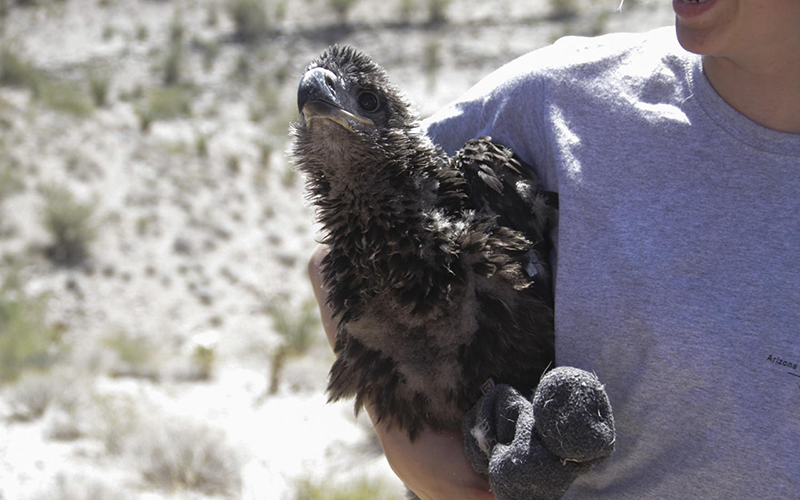 The metal leg bands on this 5-week old bald eagle will help Arizona Game & Fish identify the bird as it grows up – if it beats the odds for survival. (Photo by Mariana Dale/KJZZ)

This is the one guaranteed opportunity nest watchers have to see the chicks up close.”I was super nervous the first time I held one,” Vader said. “I had to be talked into it.”

Vader nestled the brown-gray eaglet under her arm, its already-sharp black talons wrapped in cloth and a leather hood covering its eyes, calming the chick.

Although it’s generally frowned upon in the wildlife biology community, Vader sometimes can’t help but talk about the birds as if they’re humans.

“Eagles are the strong, sensitive type,” Vader said. “They’re a mighty bird, but little things can harm them.”

A few weeks after that visit, one of the two chicks in this nest is discovered dead. Vader thinks an evening windstorm swept the little female from the tree.

“You know that was really sad, that was one of those bad days,” Vader said.

These small tragedies are a part of eagle watching.

“I just like processed the whole thing standing here and watching eagles grow,” Vader said. The rhythm was comforting.

“The cycles, the coming and going, and the life and the death that you see — it just helps me to know my place,” Vader said. And that place is? “Temporary,” she replied.

“I just hear a little rustling and something scooted off there and I’m like, ‘Baby!’ ” Vader recalled.

The young bird was alive and it’s back in the nest, for now. Vader will continue to watch from a distance until it flies from the nest on its own.

Even then, odds are against the bird making it to breeding age, about 4 or 5 years. An estimated 75 percent of fledglings die before they reach adulthood.

“You have to be patient,” Vader said. “There’s just so much that cannot be controlled.” 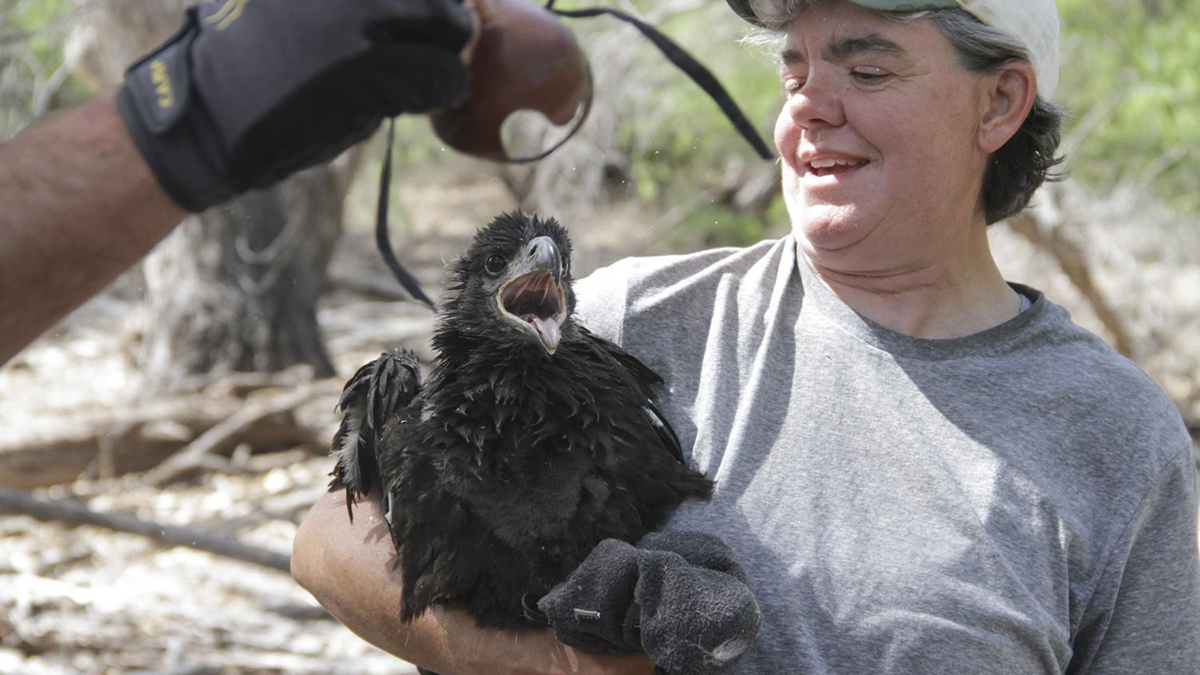 Eagle watcher Jen Ottinger said the work gives her a chance to get an intimate view of how eagles “raise their young and what their daily lives are like – and not a lot of people get to see that.” Her first eagle nest-watching season was in 1995. (Photo by Mariana Dale/KJZZ)