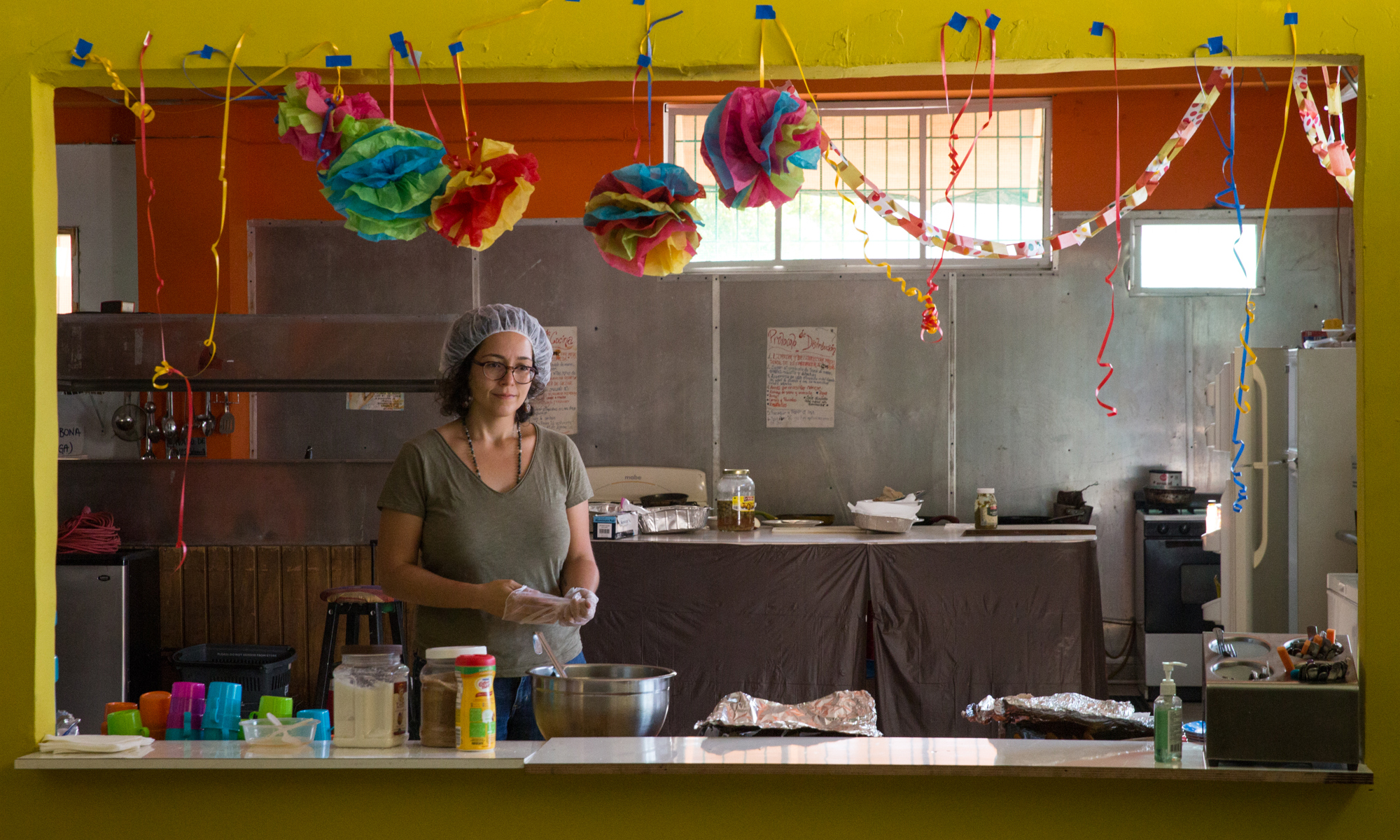 By Jenna Miller/Cronkite Borderlands Project | May 21, 2018

CAGUAS, Puerto Rico – Hurricane Maria has reignited a small movement in Puerto Rico aimed at strengthening the local food system so the island can survive and thrive without dependence on the mainland U.S.

Before the hurricane struck in September 2017, Puerto Rico imported about 85 percent of its food. And to make matters worse, Maria wiped out 80 percent of crops on the island, according to The New York Times.

It’s not a new idea. In 2015, Myrna Comas Pagan, Puerto Rico’s former agriculture secretary, told officials with the U.S. Department of Agriculture, “Our island depends on food imports – that’s a point of vulnerability. We have a critical situation.”

However, the idea of becoming more food independent parallels an issue Puerto Rico has grappled with for decades: Should it remain a U.S. commonwealth? Should it become the 51st state? Should it seek independence?

Some say Hurricane Maria has shifted the debate by exposing a toxic relationship with the U.S. government, one they view as colonization.

“Maria just let us see that the crisis is just there,” said Emilú De León, a member of Comedores Sociales in Puerto Rico, a food distribution initiative. “It’s the government that can’t do anything, that can’t respond. It’s the colonialism, the hunger, it’s everything.”

Others are thankful for federal aid and say the situation after the hurricane would have been much worse without help from the Federal Emergency Management Agency and other organizations from the mainland.

“With all the problems, the U.S. government approved $49 billion in aid, not just for Puerto Rico, but for all the territories,” said Emilio Pantojas, an economist at the University of Puerto Rico. “Who is going to provide that kind of aid in the international community?”

Puerto Rico, a U.S. commonwealth less than 1,000 miles southeast of Miami, has always had a complicated relationship with Washington, D.C. Residents have U.S. citizenship and access to some federal aid programs, but they can’t vote in presidential elections and don’t have voting representation in Congress.

Lawyer and political analyst Leo Aldridge said the relationship polarizes the Puerto Rican community and has been amplified by the impacts of storm and the federal response.

Organizers of the Puerto Rican food movement say the hurricane has made the public aware of the shortcomings of the mainland U.S. government and more receptive to the need to produce healthy food locally.

Teacher Dalma Cartagena lived without power for more than six months after Hurricane Maria roared through her mountain town of Botijas. Yet, even as she worried about her own home, she thought of her students and her garden. Cartagena teaches agriculture to grade-schoolers, including Shaidymar Vélez (left). "This program is very important to me," Cartagena said in Spanish. "It’s possibly what I came into this world to do." She started working in the garden again as soon as she could. The first harvest – beans that fed 200 people – came three months after Maria hit. (Photo by Jenna Miller/Cronkite Borderlands Project)

The small town of Botijas sits an hour inland from San Juan, connected by twisting roads that vary in condition. Six months after the storm, many electric lines still hang haphazardly along the streets. (Photo by Jenna Miller/Cronkite Borderlands Project)

At Botijas Secondary School No. 1, students rush into the classroom after a short lunch break. Because of the power outage, the school operated on a half-day schedule. After greeting each other and changing into boots, students have only about 10 minutes in the garden. They work with hoes to ready new beds for planting while chanting in Spanish, "Up and down, we prepare the earth." Nine-year-old Elienis Rodriguez (left) said that agriculture class is her favorite part of school. She likes to plant and harvest in the garden. For a month after the hurricane, her school was closed, and she stayed at home during the day. (Photo by Jenna Miller/Cronkite Borderlands Project)

Cartagena teaches the students about ecology, both in the classroom and through real life examples. The garden is free of pesticides and herbicides, and the students tend to a large pile of compost outside. Despite the destruction in her town, Cartagena said she isn't angry about the hurricane. "We respect the hurricanes because we know that they are part of nature," she said. "Maria left us a huge quantity of leaves, tons of materials and trees to make compost and moved tons of soil and natural fertilizers." (Photo by Jenna Miller/Cronkite Borderlands Project)

After working in the garden, the children clean the soles of their boots. Cartagena checks each student's work before turning her attention to her own. Like meditation, she said, carefully removing the dirt from her boots is the calmest part of her day. Cartagena said Puerto Ricans have to be able to produce their own food, and it’s essential to teach that skill to children. (Photo by Jenna Miller/Cronkite Borderlands Project)

In Caguas, on the north shore of Puerto Rico, Giovanni Roberto has spent much of his life working to lessen the commonwealth’s dependence on the mainland. At first, he campaigned for independence but realized the efforts weren’t effective. "After more than 10 years doing that, we stopped and we said, ‘OK, this is not working,’" Roberto said. "More people are not independentista (independent) than before." He transitioned his efforts and opened a social kitchen at the University of Puerto Rico, where students trade or work in exchange for prepared meals. He wants to show the rest of the United States that Puerto Rico can help itself and doesn't need to rely on food stamps and other federal aid. (Photo by Jenna Miller/Cronkite Borderlands Project)

After Hurricane Maria, Roberto met with Emilú De León (right) and others who are part of Comedores Sociales de Puerto Rico, an organization that promotes self-management and social empowerment. De León grew up in Puerto Rico but left after college for 10 years to work in Europe. She said she returned home because it felt like something was missing from her life. “I couldn’t find my place,” she said. “I guess something like my roots were calling me back.” Nine days after the hurricane struck, Roberto, De León and other volunteers opened a kitchen to serve meals to the people of Caguas. The first day, they fed 600, De León said. People could pay for their food, work in the kitchen or trade canned food. (Photo by Jenna Miller/Cronkite Borderlands Project)

Cándida Martinez prepares breakfast and lunch at the center. The organization Comedores Sociales de Puerto Rico advocates for community building and a move away from the capitalist U.S. economy. “In order to improve our quality of life we need to break our relationship with the U.S. and control our economy, control our borders and be able to have relationships with other countries,” Roberto said. Federal assistance programs have not helped Puerto Ricans, he said, instead benefiting American companies on the island. But Emilio Pantojas, an economist at the University of Puerto Rico, disagreed, saying that despite problems with American exploitation, the island’s economic situation would be far worse without ties to the U.S. (Photo by Jenna Miller/Cronkite Borderlands Project)

Roberto and De León also said that they are aware the decision lies in the hands of the U.S. federal government. "I don’t believe in statehood, but I don’t see it clear. I don’t think U.S. is going to give us independence," De León said. Nor has the U.S. moved to make Puerto Rico the 51st state, Pantojas noted, even though he thinks that’s the most popular option among his peers. "If you ask the average Puerto Rican, they would probably be for statehood," he said. "But if you ask the average congressman, they don't want to give statehood to Puerto Rico." (Photo by Jenna Miller/Cronkite Borderlands Project)

Across the island in Salinas, farmer Carlos Lago said Hurricane Maria gave him clarity on the island's political status. "We can't remain in the current state," Lago said in Spanish. He said his farm was destroyed by the hurricane and he has not received any federal aid. Lago’s wife said she appreciates what the U.S. did to develop Puerto Rico in the past, but it’s time for independence. (Photo by Aydali Campa/Cronkite Borderlands Project)

After the hurricane, Tara Rodriguez co-founded the Puerto Rico Resiliency Fund, which aims to help rebuild 200 farms affected by Hurricane Maria over two years. The group travels to farms in a vibrant van, bringing food, tents, volunteers and materials with them on trips they call “brigades.” Struggling to get healthful food after the hurricane has opened the public’s eyes to the necessity of building a sustainable agriculture industry on the island, Rodriguez said. "I think that we have been marked," she said of Maria. "And I really want that to be, I guess, effective for positive change." (Photo by Jenna Miller/Cronkite Borderlands Project)

Lago and Diaz welcomed the arrival of Resiliency Fund, which brought volunteers from Vermont, many of whom were farmers themselves or had experience with sustainable agriculture. Lago sat down with the group over breakfast to talk about plans for the day and the possibility of installing solar power on his farm. Luz Cruz (right) said providing emotional support for farmers is just as important as helping with the physical work. “I can only imagine the feelings that crop up when your life's work has been destroyed by a natural disaster,” he said. “We’re trying to leave things better than the way it was before we got there.” (Photo by Jenna Miller/Cronkite Borderlands Project)